VIX breaks into the mid teens

With equities broadly weak for a second day, the VIX saw a second day of gains, settling +5.7% @ 15.12 (intra high 16.36). Near term outlook offers the sp'2040/30 zone before the weekend, which will likely equate to VIX maxing out somewhere in the 18/20 zone. The big 20 threshold still remains difficult to break/hold. 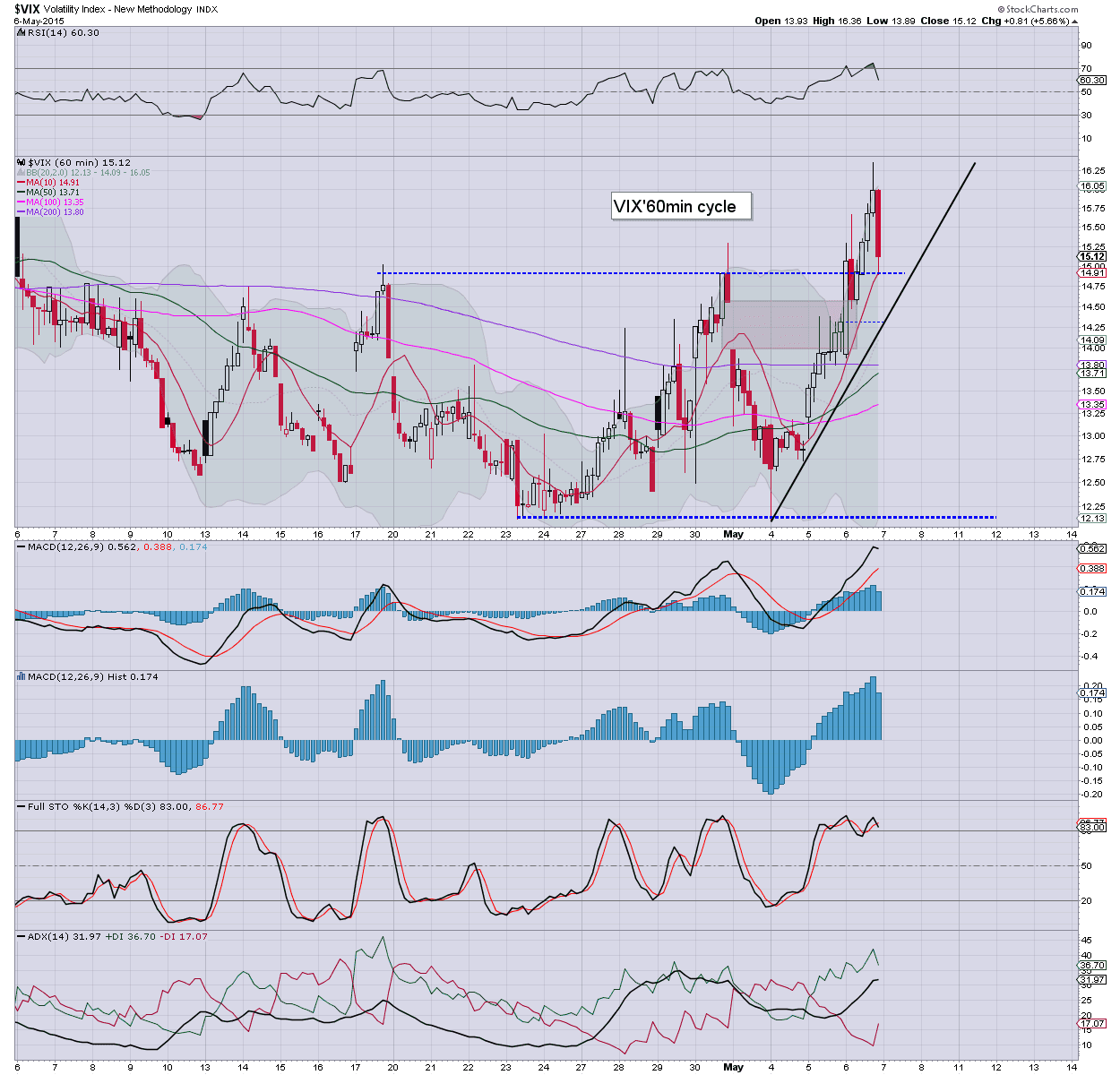 With the equity bears taking control for a second day, the VIX has now climbed from the low 12s to the 16s.

However, this is of course still a very low VIX.. and even if sp'2040/30 zone within the next day or two, VIX won't likely be able to break/hold the key 20 threshold in the current up cycle.

Next best opportunity for VIX 20s is more likely mid June.... after a marginal new historic high (for some indexes).
-- 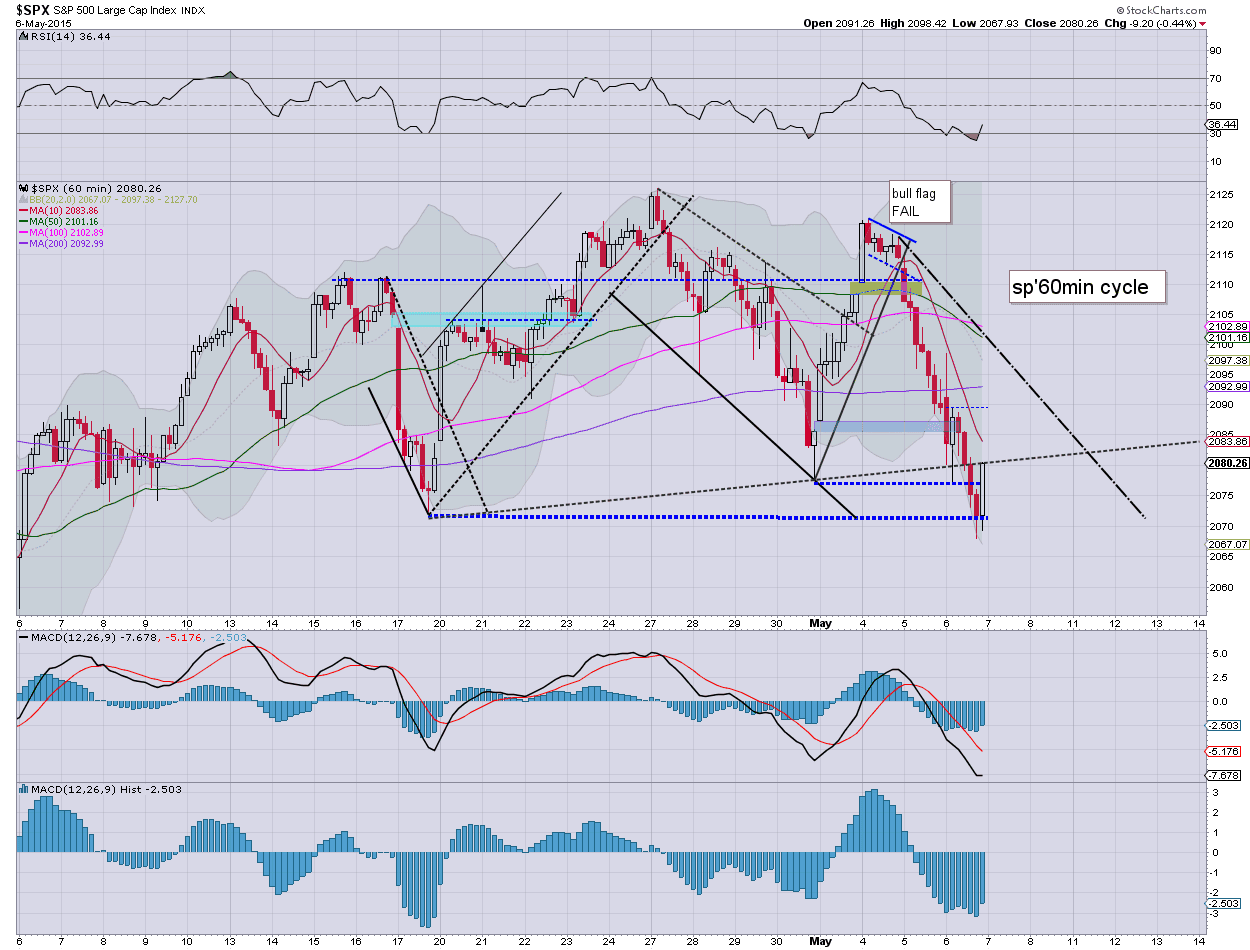 *a closing hour short-stop cascade, from 2069, but still... it does not negate the technical damage, seen across most indexes today.
--

Today was the second consecutive victory for the equity bears. The opening gains lasted mere minutes, before a rather severe reversal.. as the Yellen started muttering about equities.
--

Earnings, WFM, earnings inline: EPS of 43 cents, but market is not happy as rev' is a touch light, initial stock reaction -10%.


TSLA, earnings beat... stock swings moderately higher. Underlying issue is one of persistent losses, on what is very low sales of $1bn.

US equities have decisively failed to hold the April 17th low of sp'2072. Next support is not until the 2040/30 zone, where the 200dma will be lurking this Friday morning. VIX is reflecting a market will some mild concern, breaking into the 16s. Metals remain a little lower, Gold -$2. Oil is still set to close net higher by around 1%. 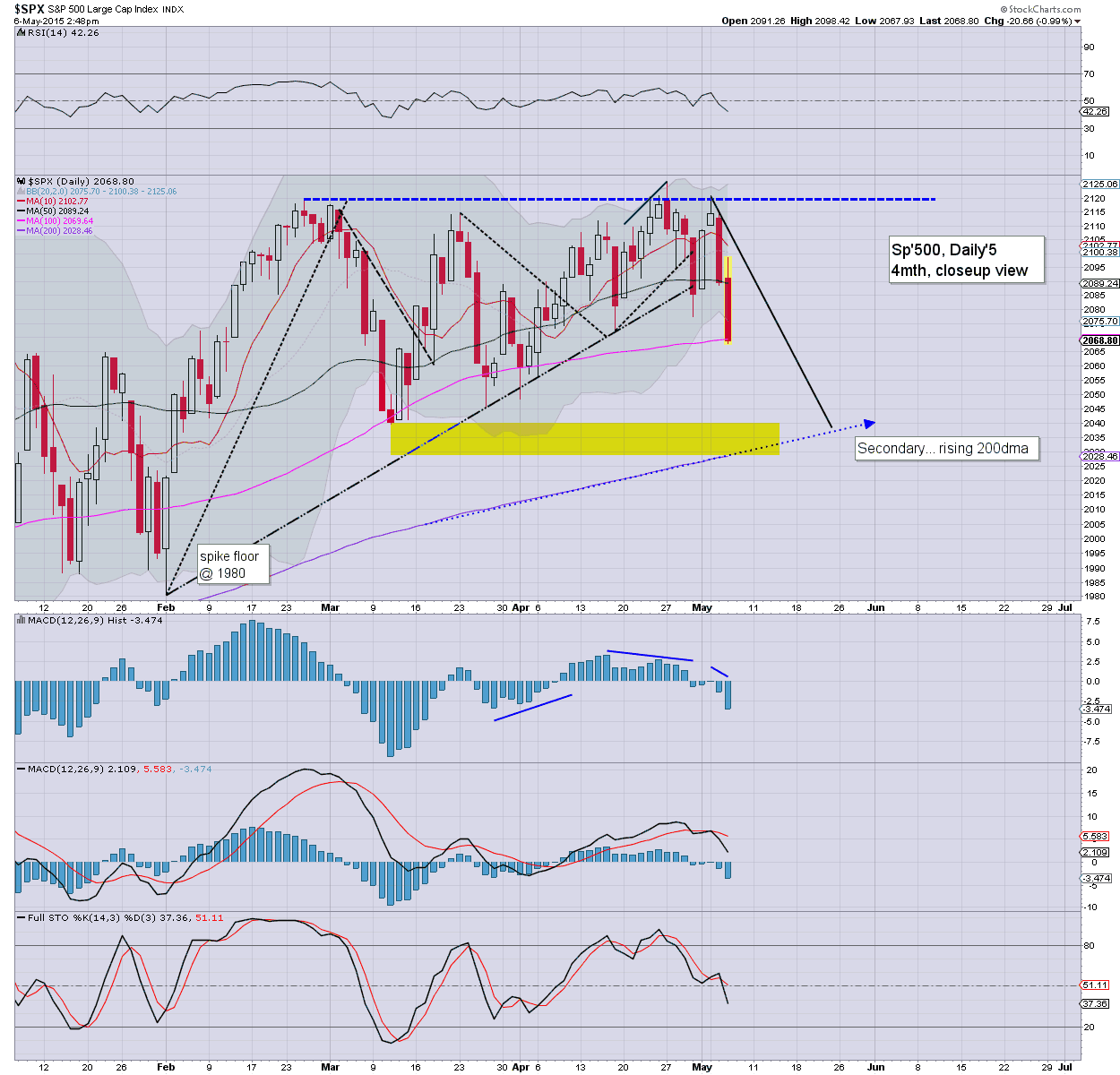 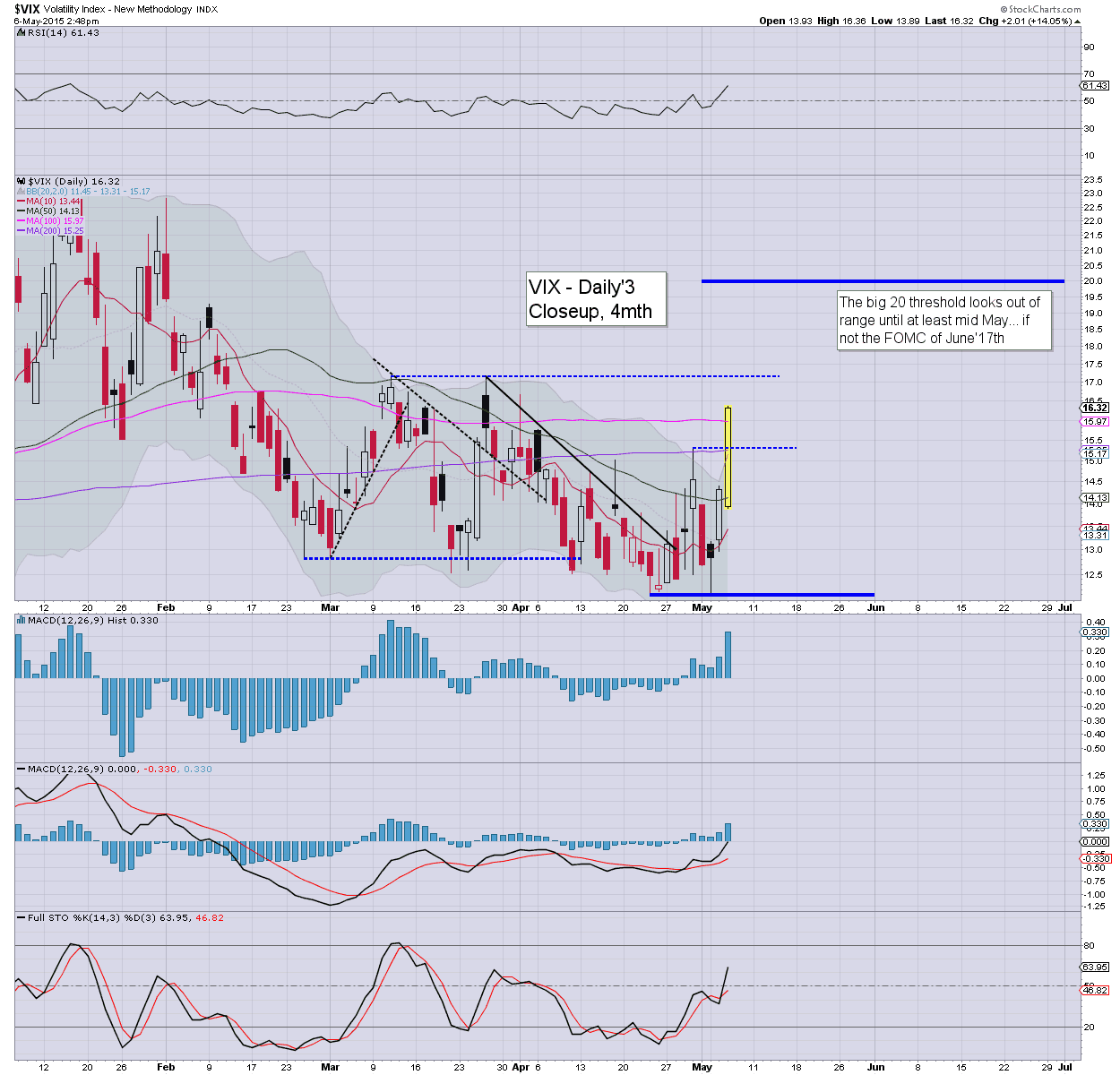 *VIX is confirming the equity declines, with the break into the 16s.. the door is open to a 'VERY brief' attempt to challenge the key 20 threshold. However, VIX 19/20s would make for a very natural spike high.. along with sp'2040/30.. whether tomorrow.. or early Friday.
--

Those touting the 2040s last night... congrats with that slightly bold call... we're on track for that now.. before the weekend.

--
In respect to the fifth anniversary of the infamous flash crash...

Much like Khan.. the bull maniacs will be back... bears.. beware!

--
*I remain short Gold.. will likely hold into early Friday.
-

sp'2073... regardless of the exact close... a second day for the bears....
Posted by Trading Sunset at 19:52:00
Email ThisBlogThis!Share to TwitterShare to FacebookShare to Pinterest 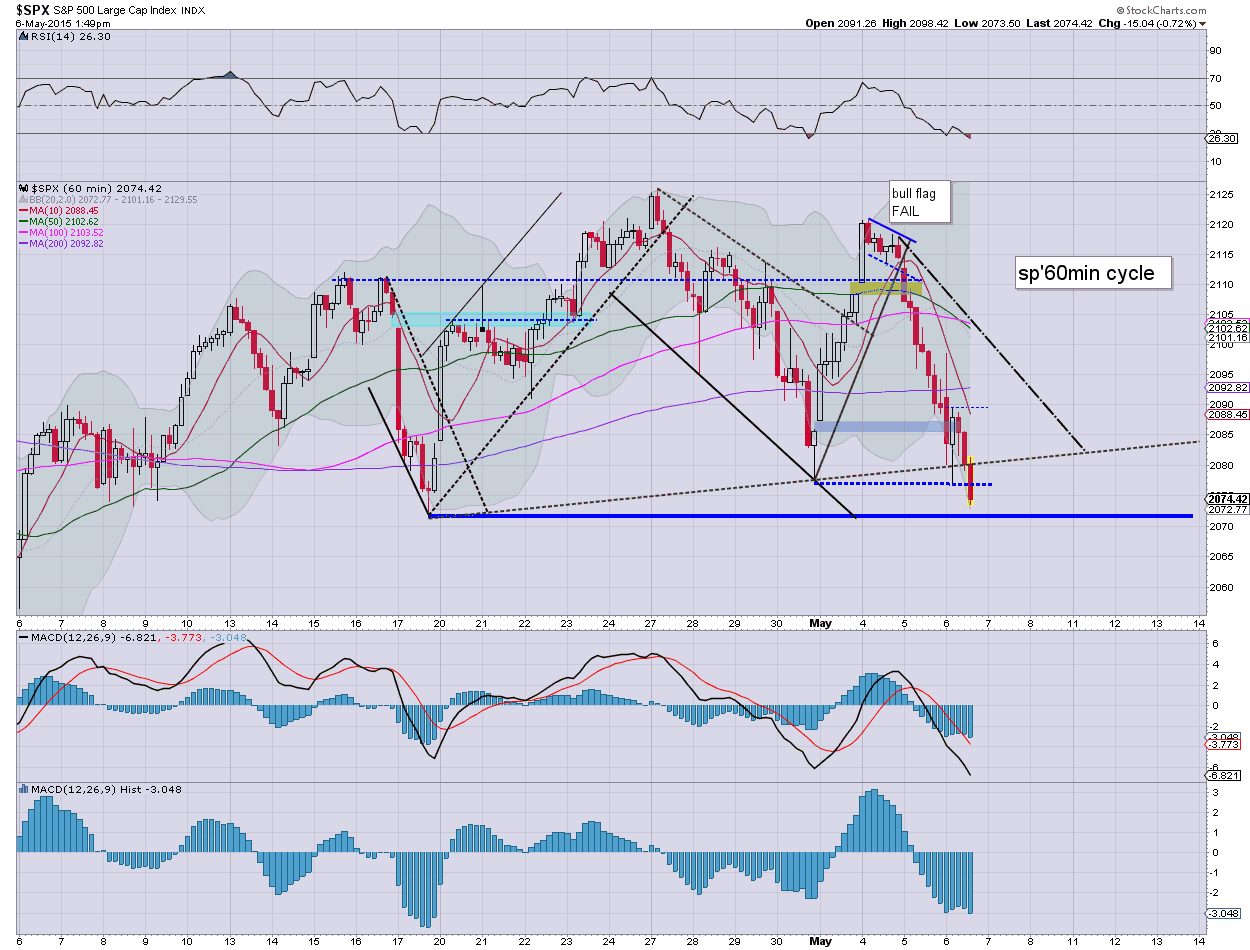 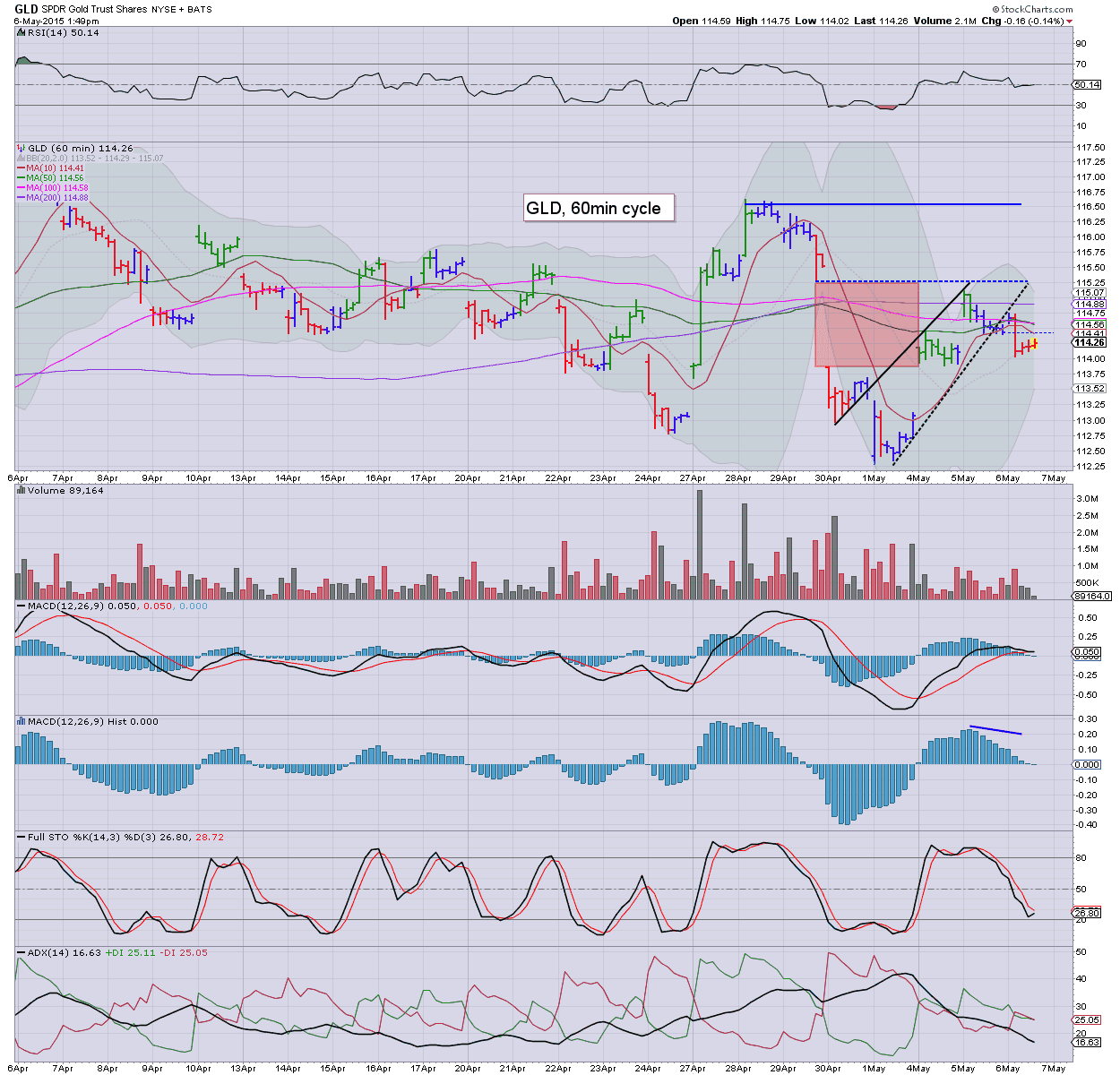 *I am short GLD, price structure remains a large H/S formation, within the broader down trend from 2011. Considering the weaker USD, Gold is performing exceptionally poorly.
--

So much for the double floor of sp'2077... we're clearly still slipping lower.

Where are the buyers?

Can the bull maniacs really blame the Yellen this morning with her equity comments?
--

notable strength: BABA +0.4%.. ahead of Thursday morning earnings. Despite the current gain though, the break of the $80 threshold yesterday is extremely bearish.. and the door is open to $70/68.. which is around 15% lower.

Market with a soft floor of sp'2073...   regardless of where we close.. and even tomorrow.. now its a case of how the Friday jobs data is perceived.

Regardless of the close... some notable technical damage  has now been done on the daily/weekly cycles.

VIX reflecting the concern... +12% in the 16s.
Posted by Trading Sunset at 18:50:00
Email ThisBlogThis!Share to TwitterShare to FacebookShare to Pinterest 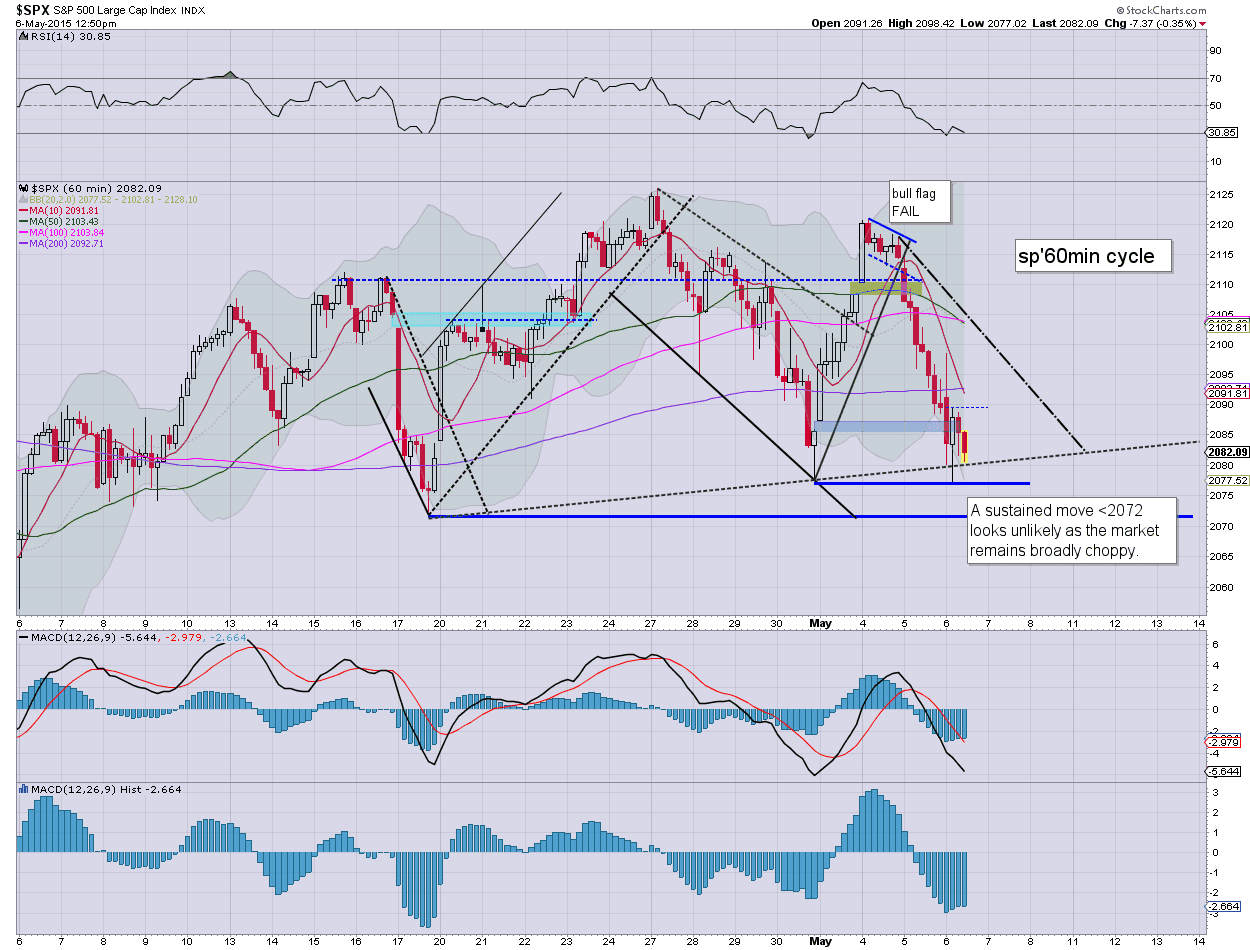 Despite the little wave lower this hour... I'd guess the earlier low will hold.

Thursday looks set for moderate chop... as the market will likely be in a holding pattern ahead of the monthly jobs data (Friday, 8.30am). 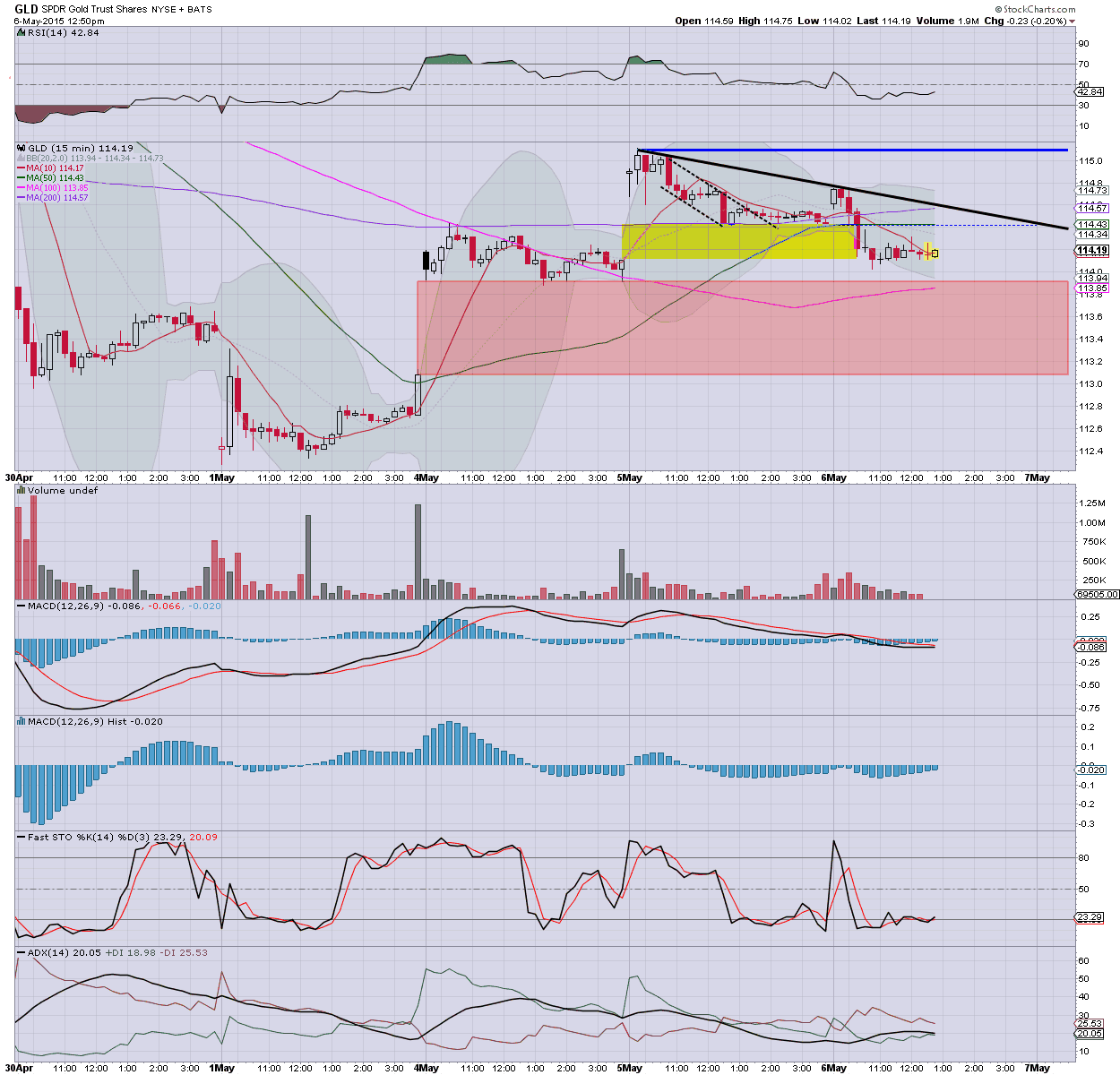 I'm still looking for another little up wave before I'll seriously considering getting involved (short side). Of course, if the USD keeps recovering this afternoon... Gold will not likely be able to claw much higher.
- 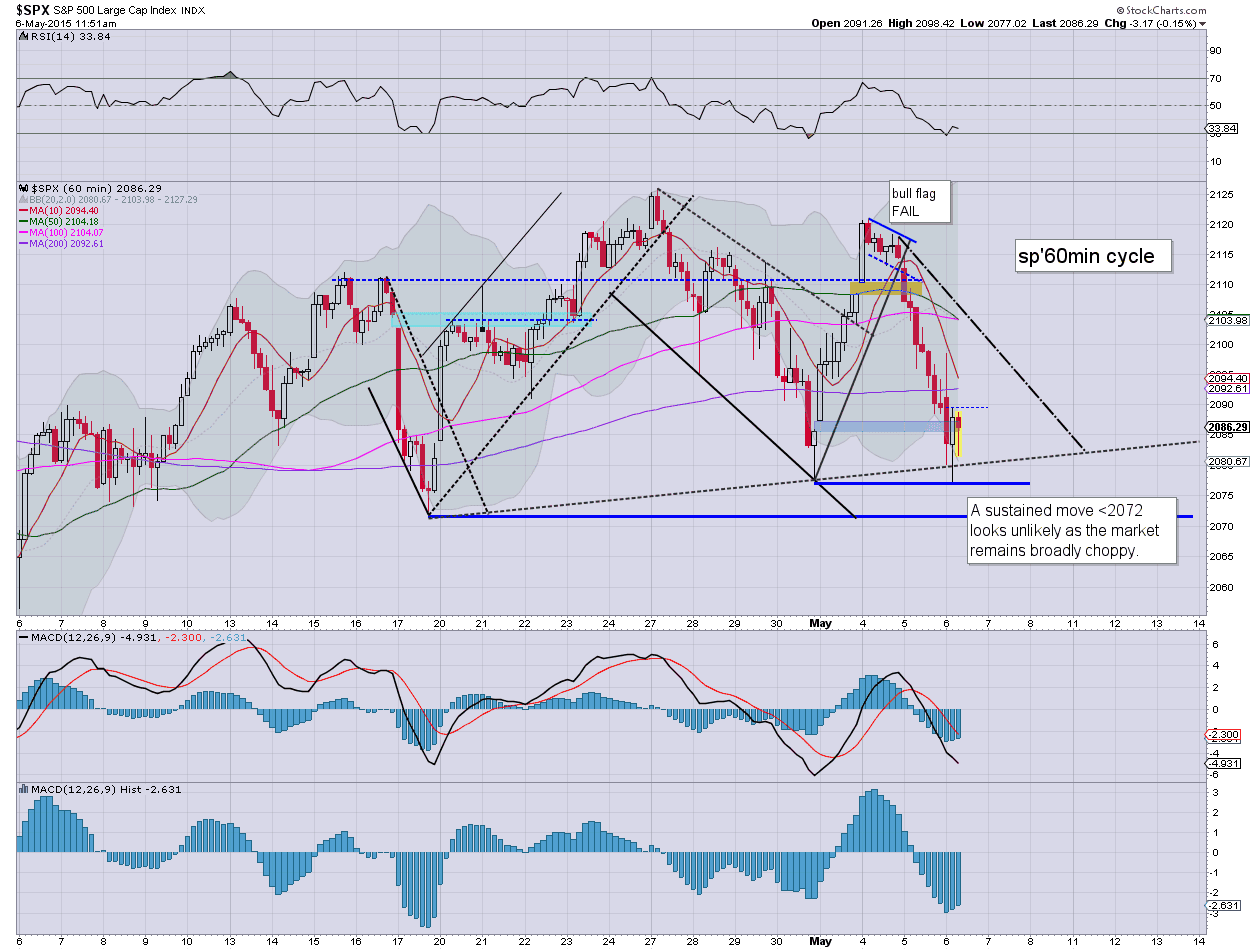 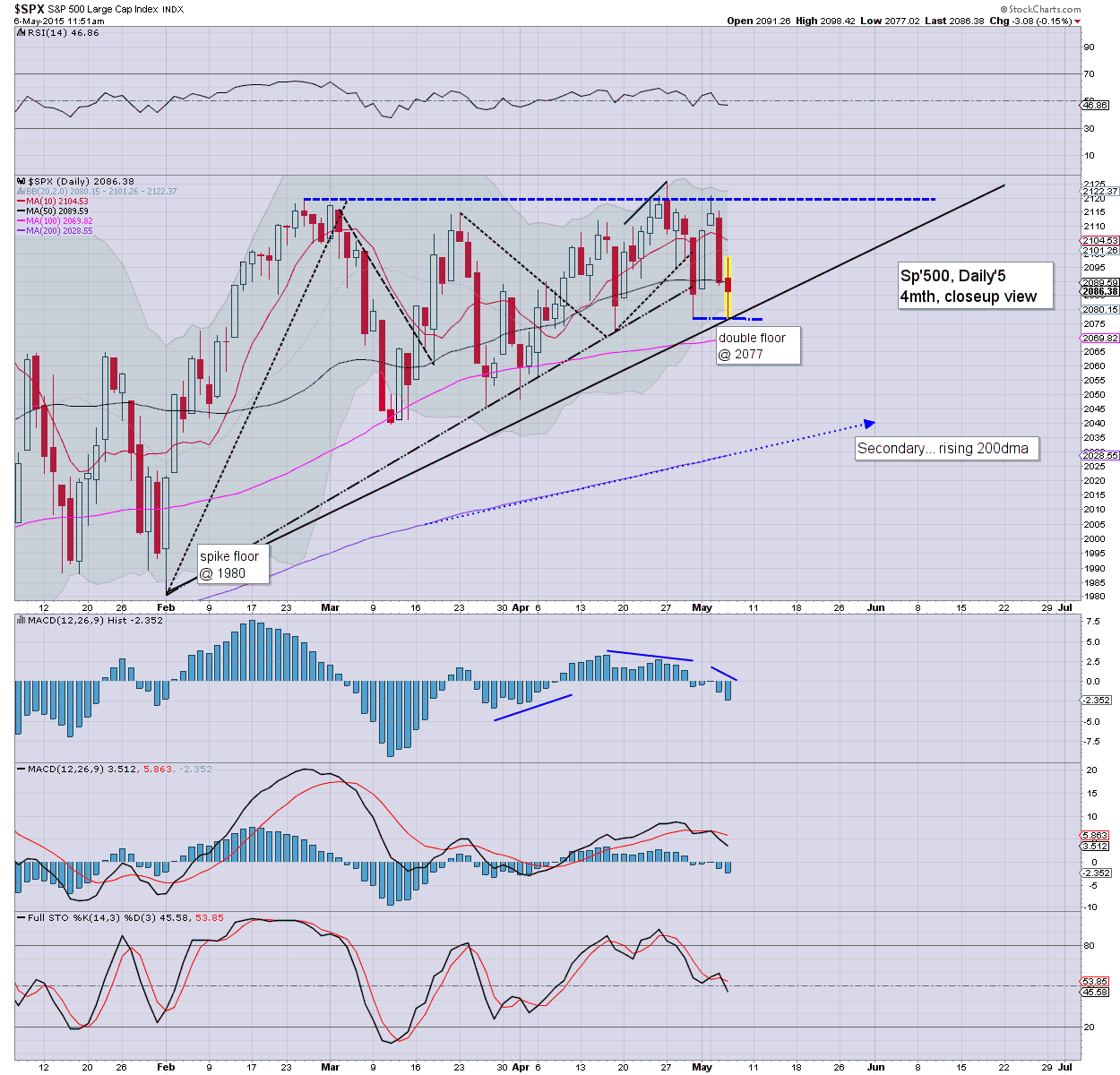 So.. we're still moderately lower, but all things considered, it looks like the market wants to build a double floor of sp'2077.

It would seem Mr Market wants to sell lower into the monthly jobs data.. and then rally on it. Regardless of what the data is this Friday morning, it'd seem to be a case of 'isn't everything great again?'

*I continue to have eyes for Gold-short, will consider in the 2pm hour...


-
time for lunch
Posted by Trading Sunset at 16:54:00
Email ThisBlogThis!Share to TwitterShare to FacebookShare to Pinterest 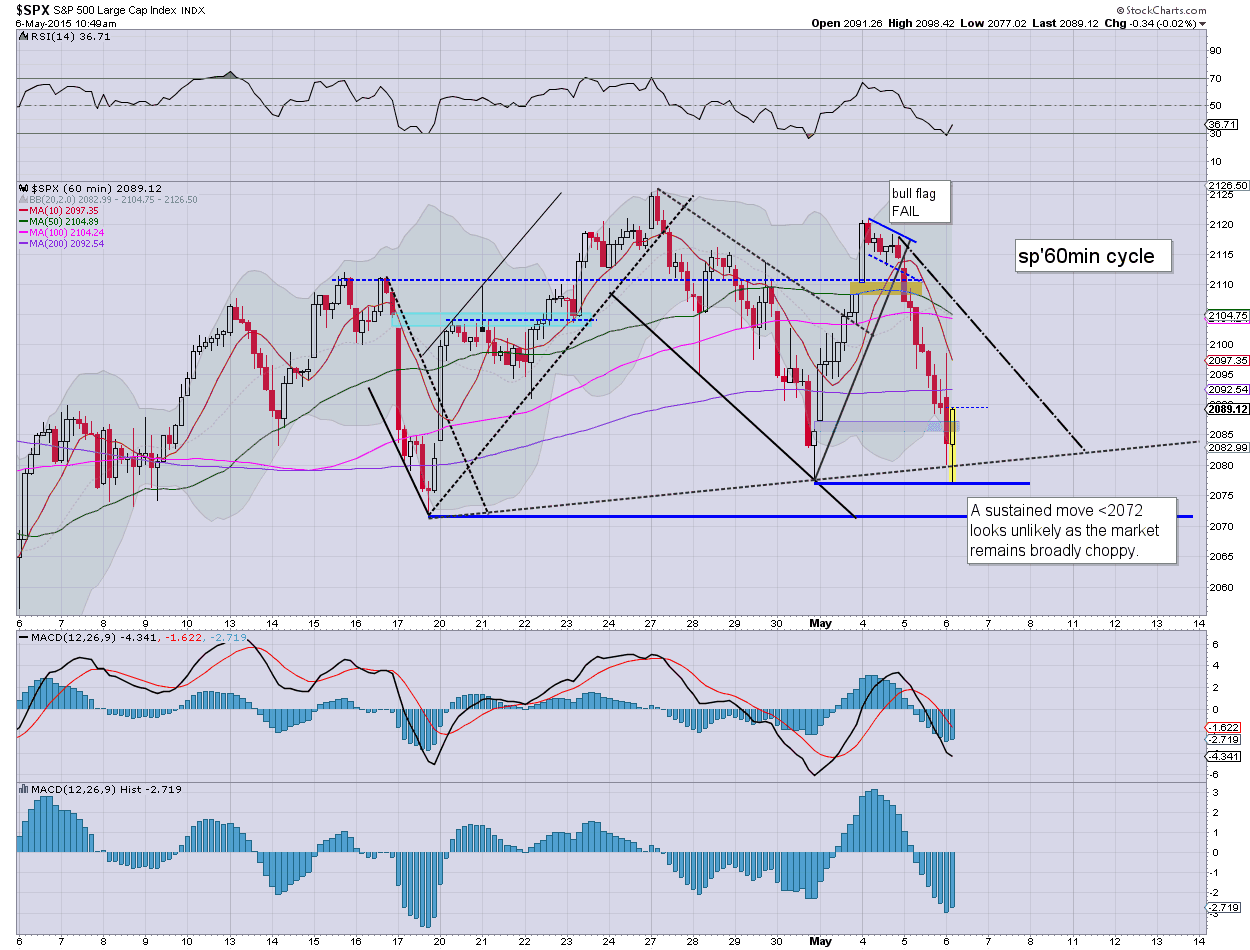 We have a pretty clear floor of sp'2077.. and the current hourly candle is offering a double floor.. from the low of April 30'th.

For the equity bears out there... that is probably it for this cycle... having fallen from 2125.

--
I'm not surprised Gold has turned lower (opening black-fail candle).. but am currently suffering from a mild case of trader paralysis. Oh well, at least I'm not losing money. 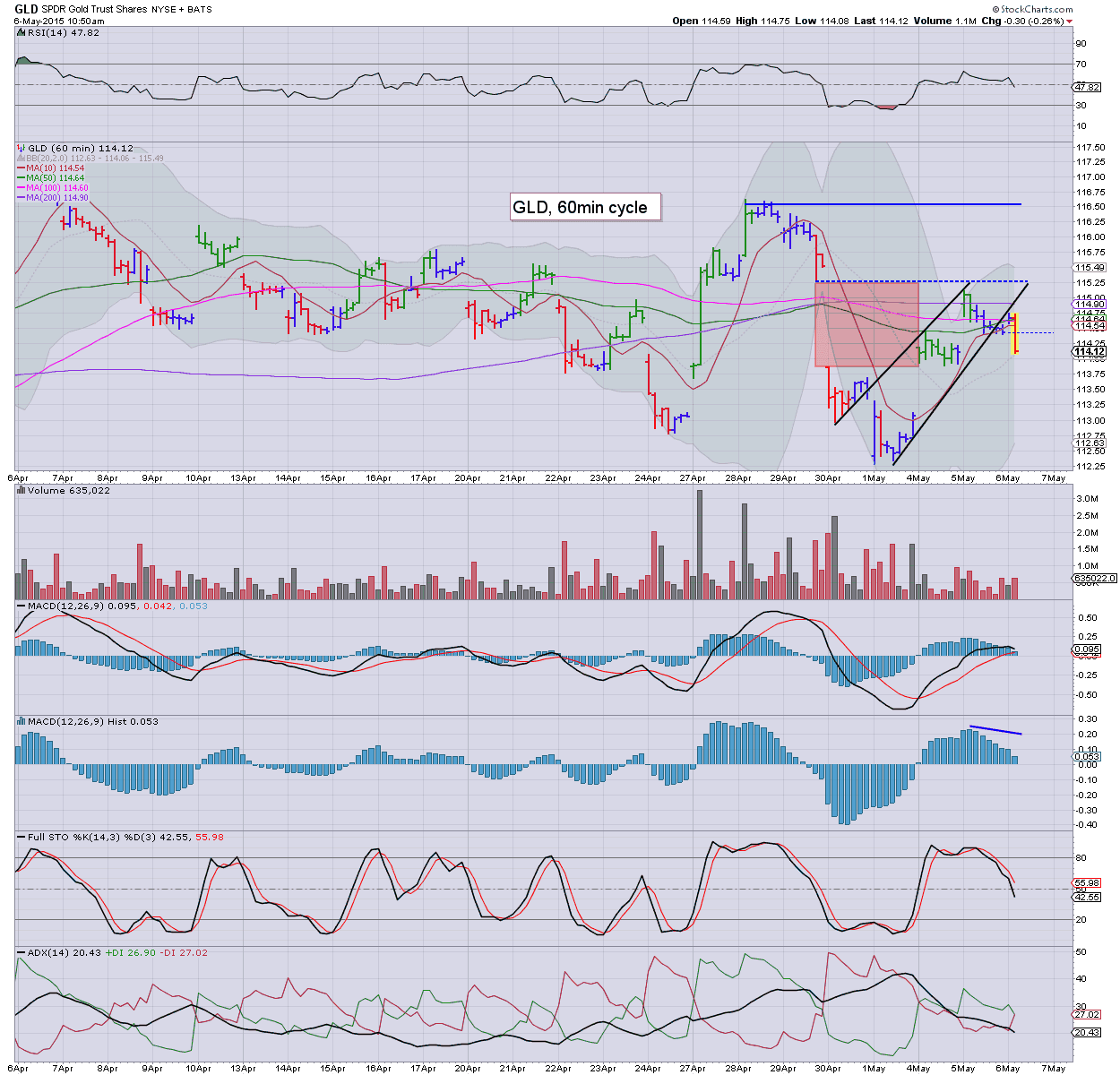 Will consider a GLD short on the next micro up cycle into the afternoon.
- 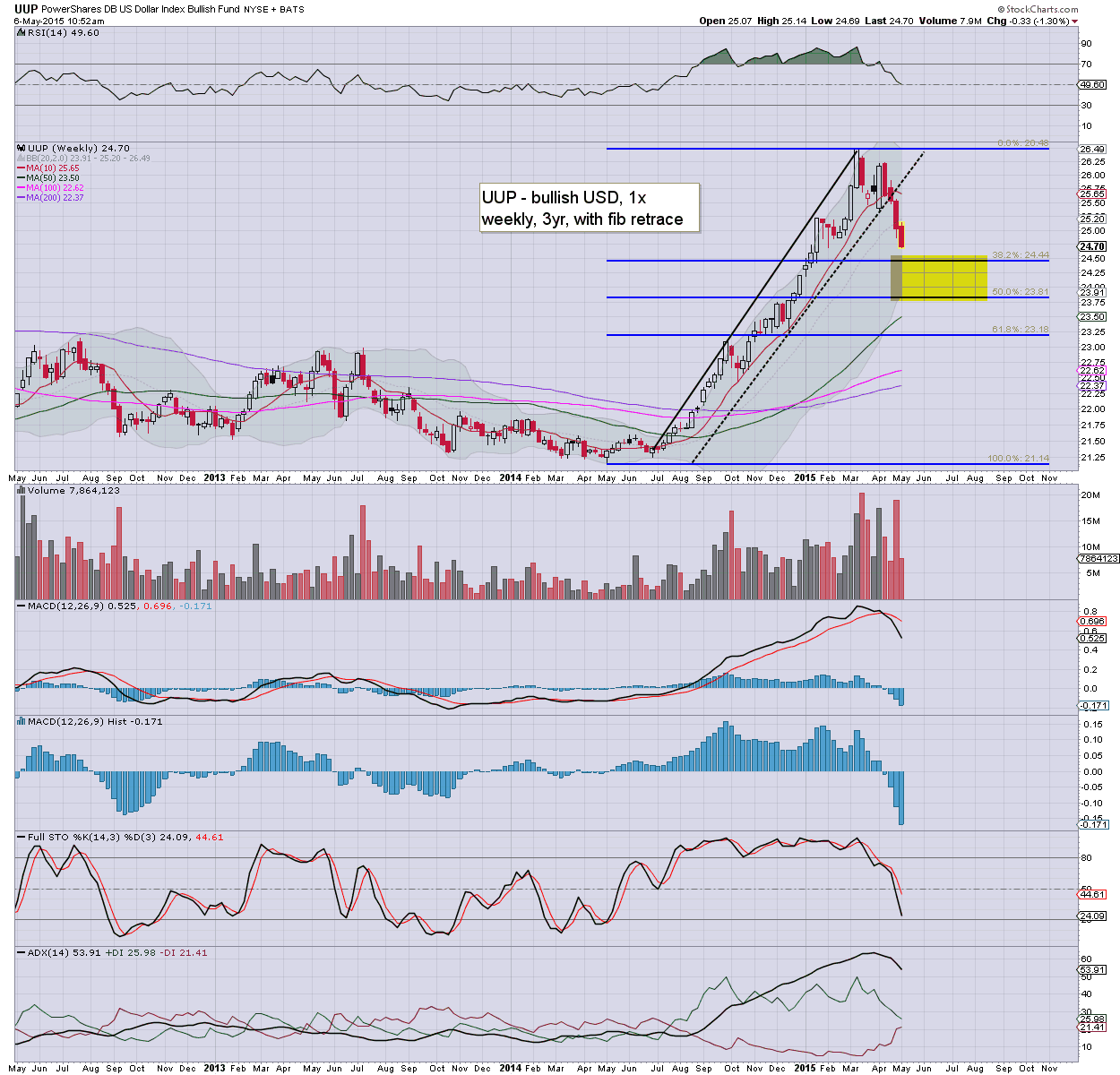 If main market can rally to sp'2170s or so... perhaps that equate sto DXY 90/89... before the next hyper wave to the 120s?
Posted by Trading Sunset at 15:52:00
Email ThisBlogThis!Share to TwitterShare to FacebookShare to Pinterest

US equities open higher to sp'2098, but almost immediately collapse back. Next support is around 2080/77. Metals are a little higher.. but look vulnerable for rest of the week, Gold +$3. Oil is holding sig' gains of 2.4% Well, that is quite an interesting opening swing! 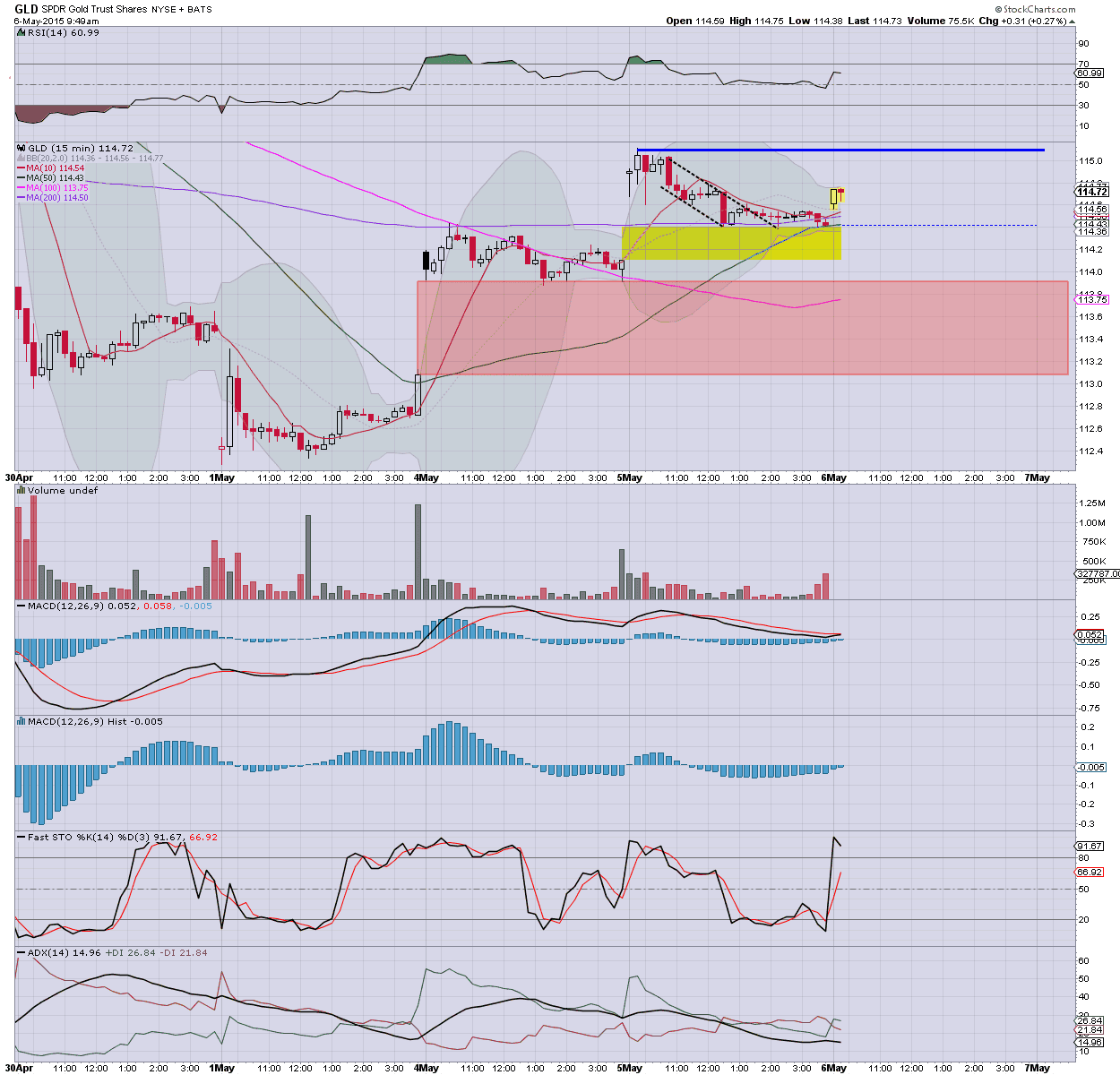 
10.15am.. Its ironic that despite the USD breaking multi-month lows... equities are not benefiting. 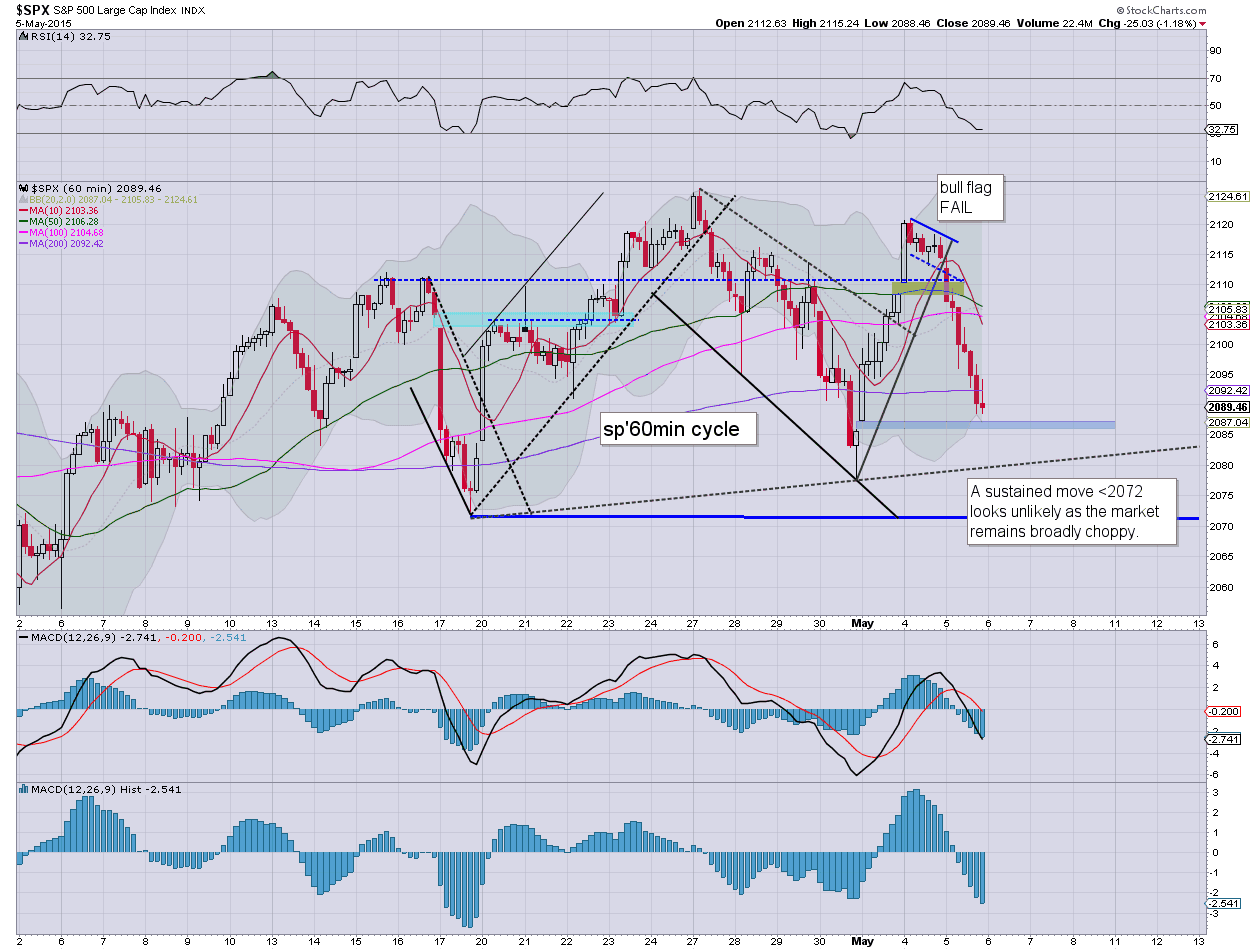 *ADP jobs: 169k, vs 205k expected... a clear miss, and again, indicative of softness in the economy. Naturally, the market might take this as 'bad news is good news', as chances of a rate hike at the FOMC of June 17'th are now surely close to zero.
--

Opening gains are not entirely surprising... however, there is high opportunity for the equity bears to turn things lower after the morning turn time of 11am. A second consecutive net daily decline looks very viable.

However, with the jobs data this Friday, I expect another up cycle into late May/June, that might end up tagging the upper bol' on the giant monthly cycle... currently in the sp'2160/80 zone.

--
I have eyes on Gold... it looks vulnerable into end of the week. Price structure is a large bearish wedge. 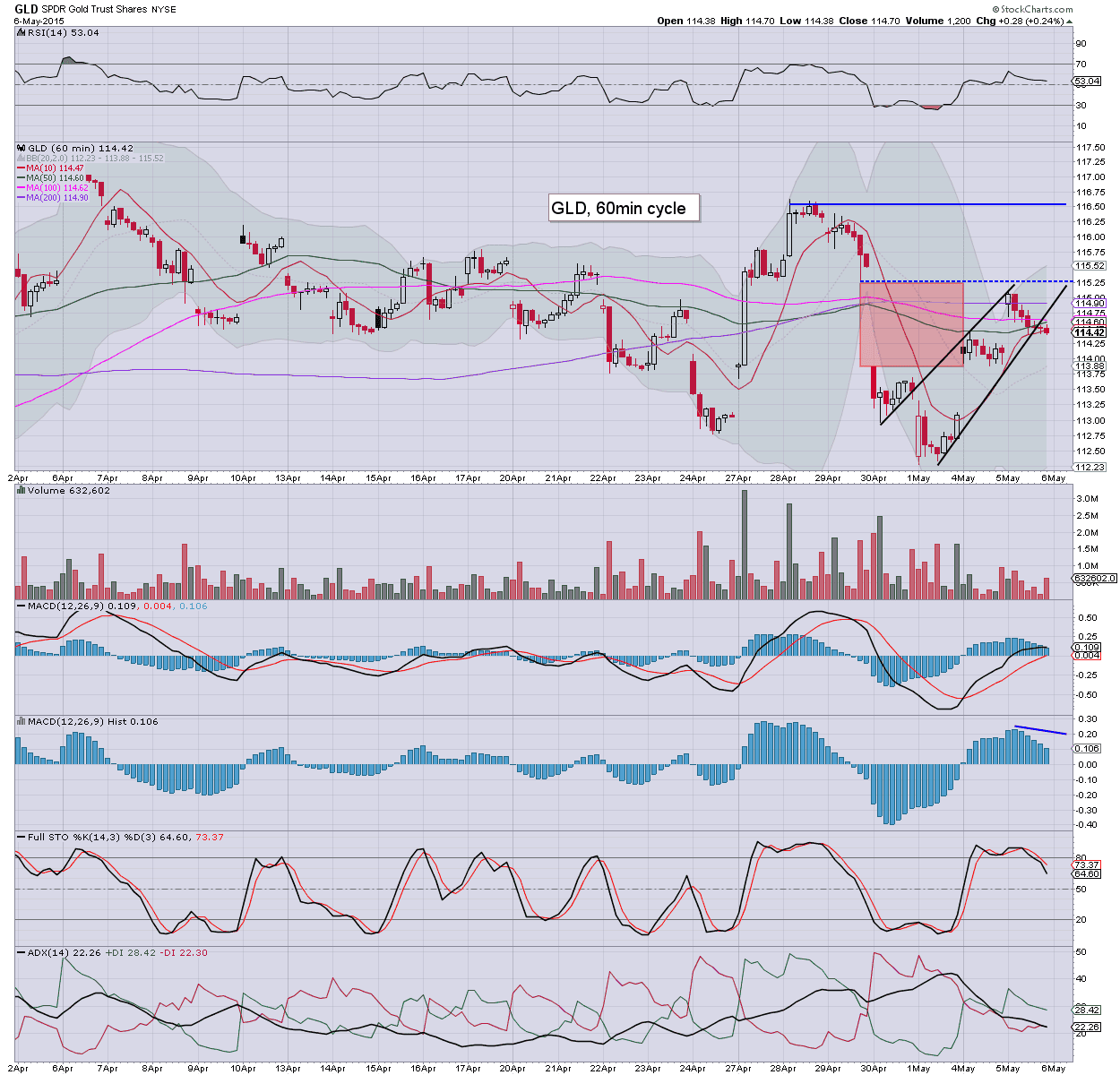 8.38am... It is notable that China overnight fell -1.6%... @ 4229... well on the way to the psy' level of 4K. Such a decline would certainly help the US equity bears a little.
Posted by Trading Sunset at 13:27:00
Email ThisBlogThis!Share to TwitterShare to FacebookShare to Pinterest

Oil breaks into the $60s

Whilst the broader market saw increasing weakness across the day, there was notable strength in WTIC Oil, which saw a net daily gain of $1.38 (2.3%) @ $60.40. Continued upside into the summer looks due, with Oil set to battle into the secondary target zone of $67/75. 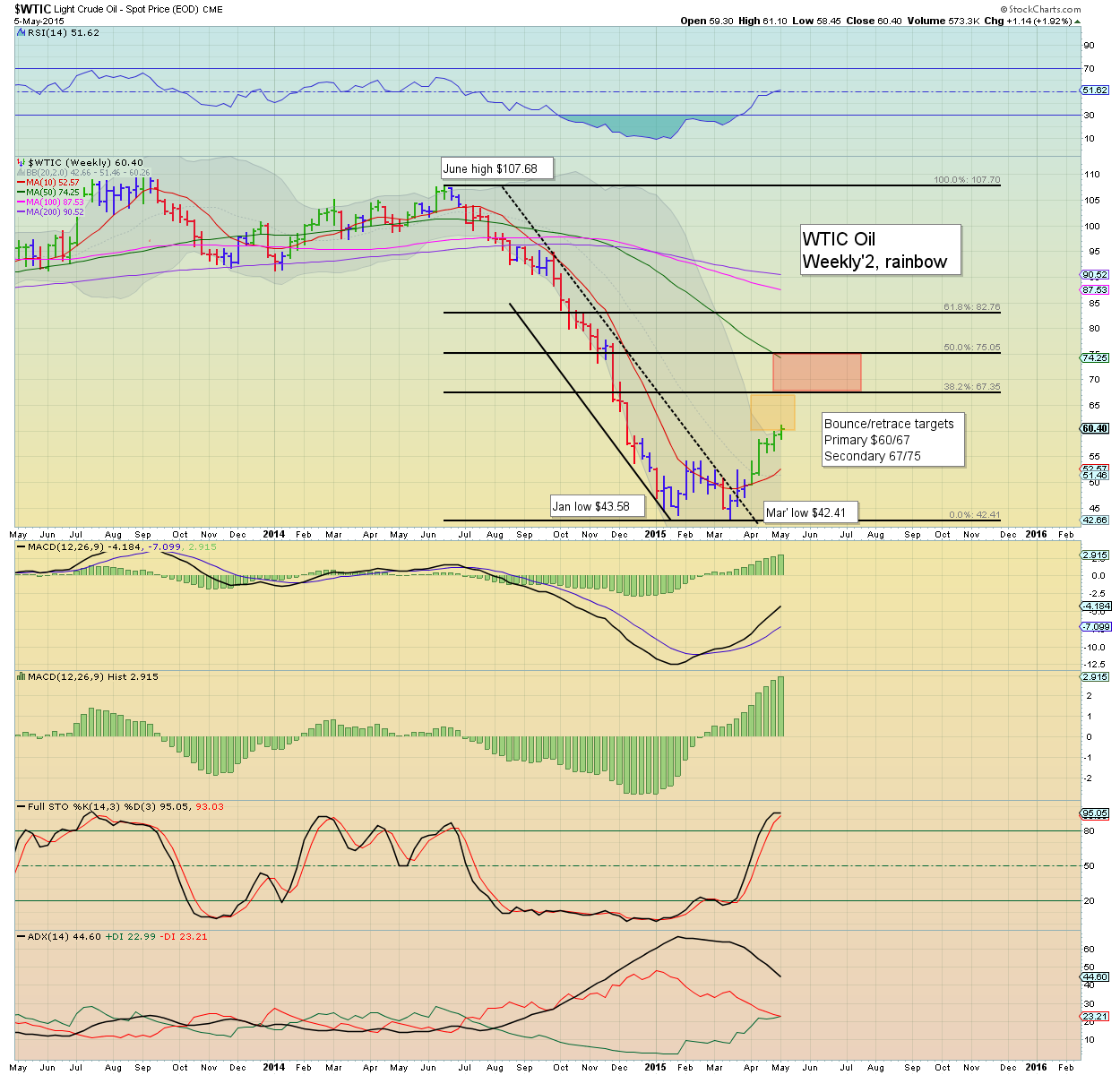 So, WTIC Oil has now broken through the psy' resistance of $60. Most now recognise that the mid/upper $60s are due by late May/early June.

For me, the only issue is whether Oil gets stuck around $67.. or can briefly break into the $70s.. .before the next rollover.

Whether Oil can eventually take out the March low of $42.41 is very difficult to guess.

What is clear.. we've already seen over half of the expected bounce/retrace.
- 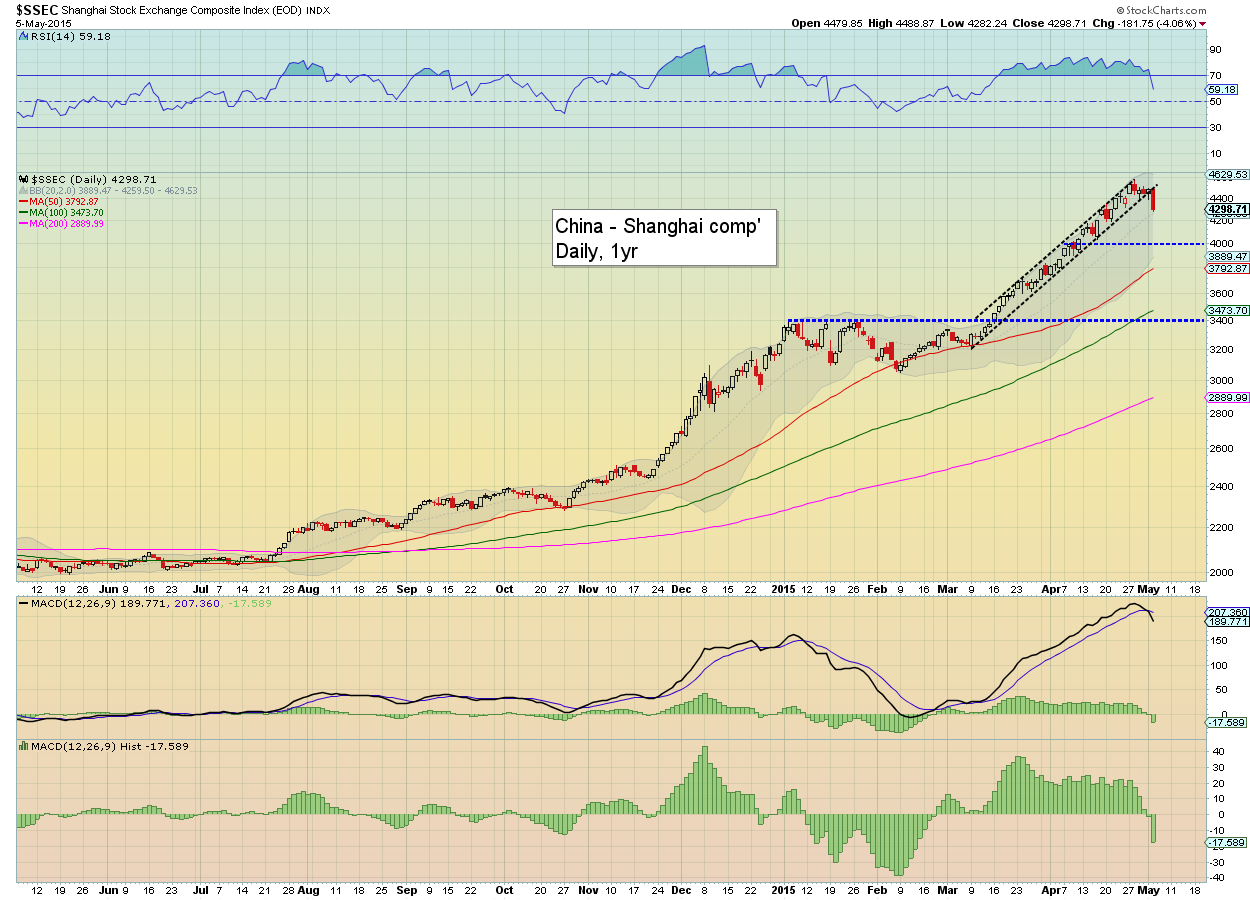 Things really only get interesting if 4K is lost... next support would be the multi-year breakout zone of 3500/400s. Regardless of any near/mid term weakness, the giant 5K threshold looks a given this year.

*I will consider going long China around 4K.. via the ETF of FXI.
--

*Amongst a number of Fed officials on the loose tomorrow, most notable will be Yellen speaking in the early morning.
-- 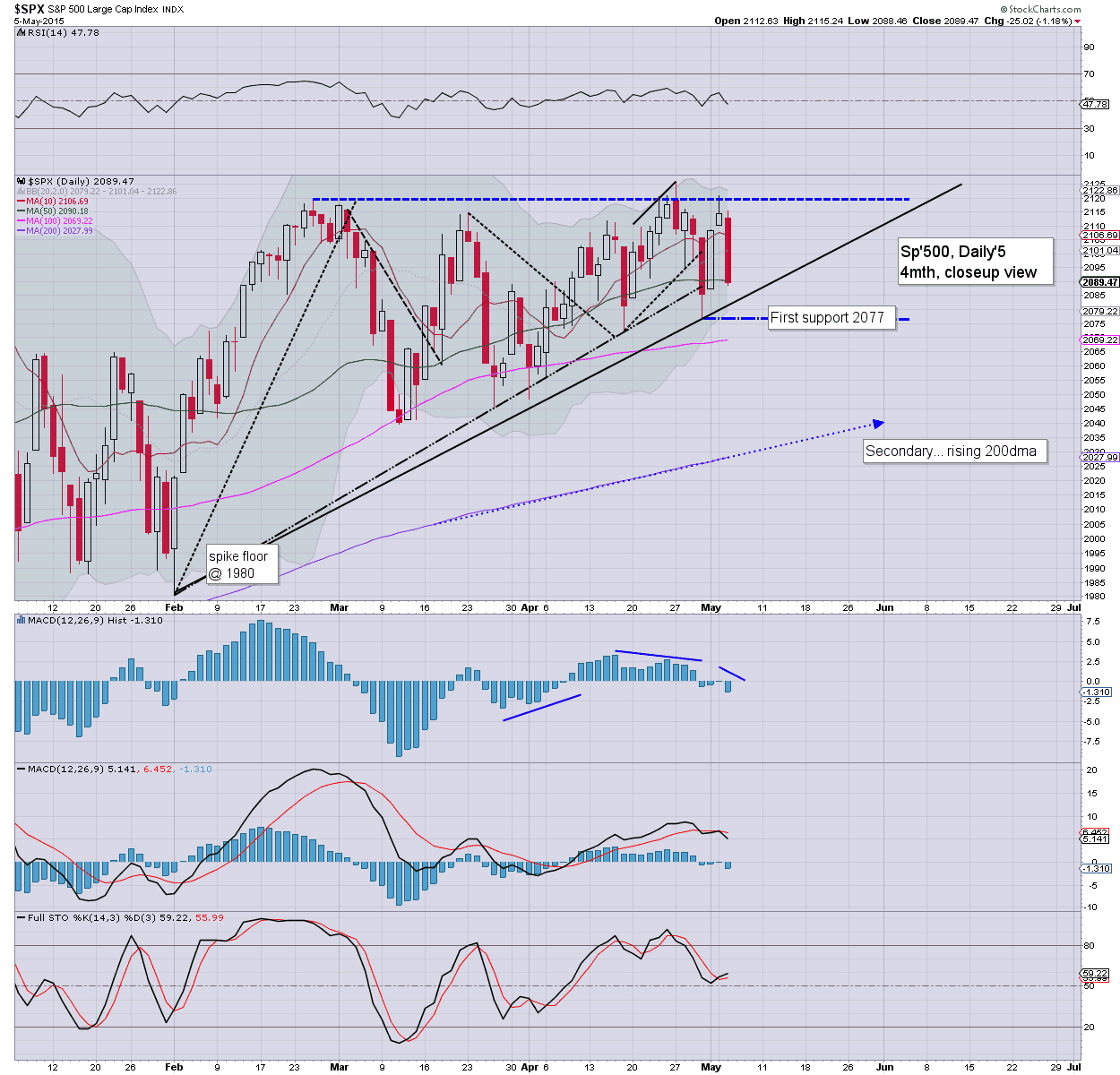 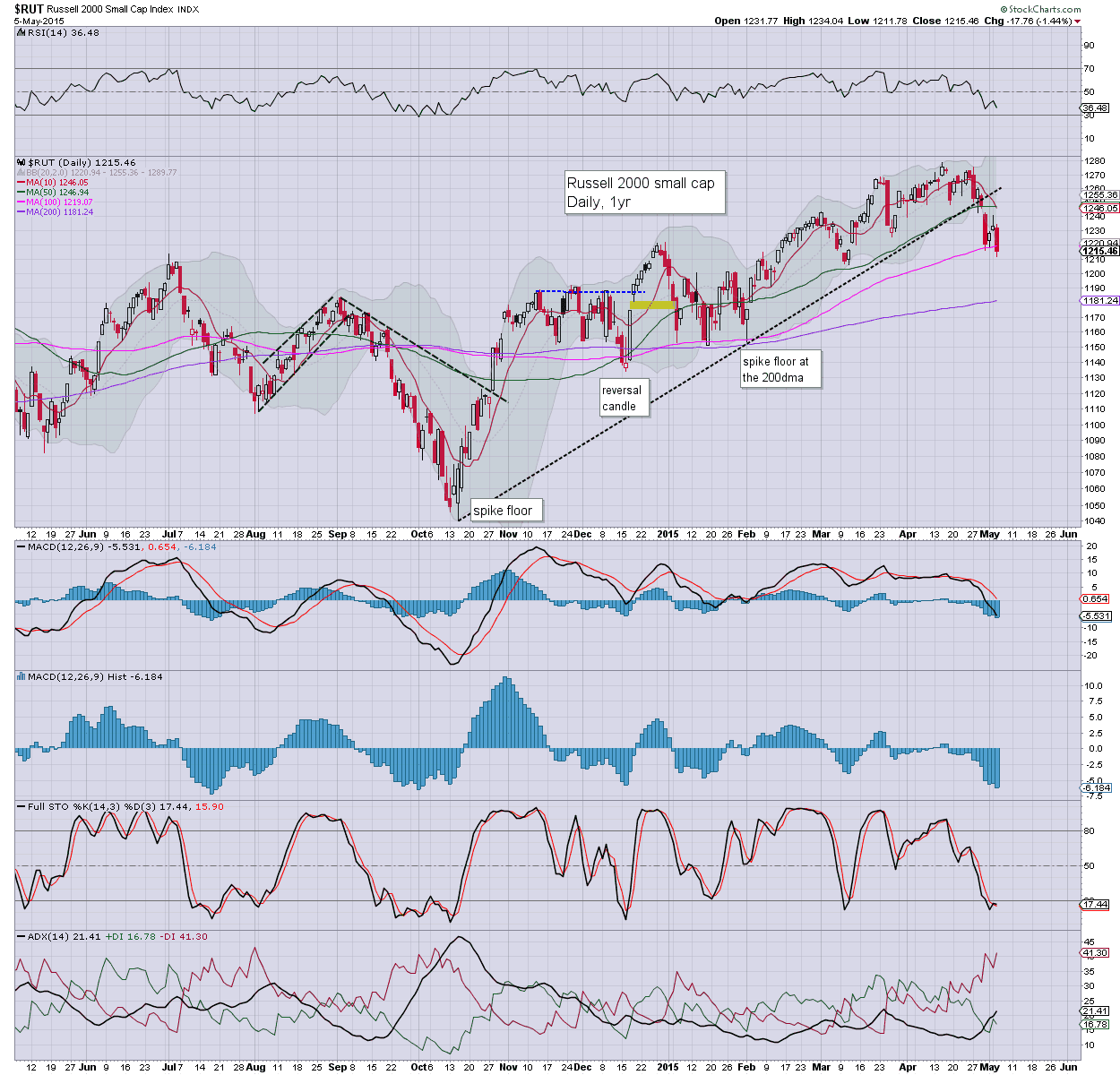 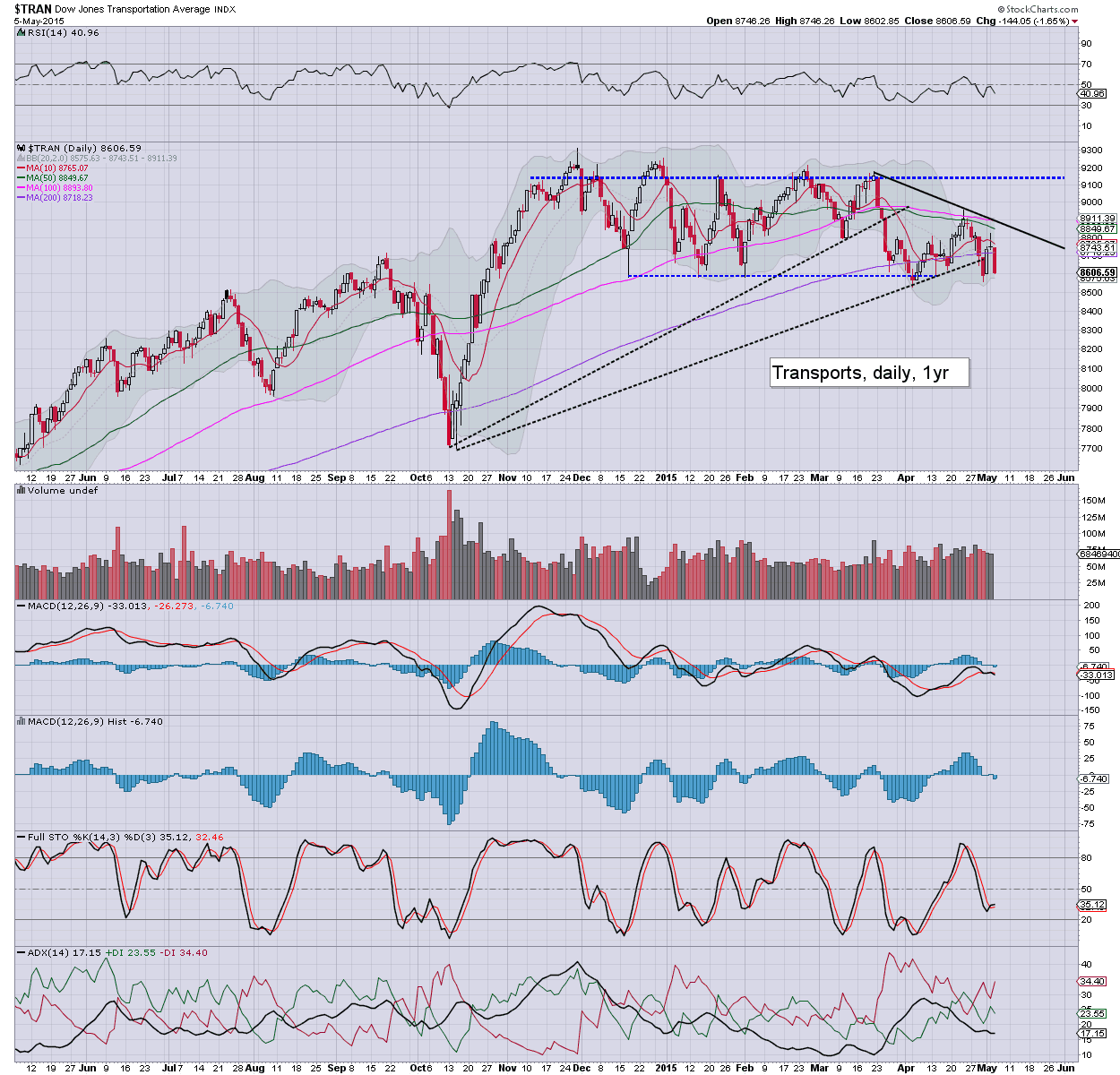 *the R2K has notably taken out the recent low, and looks headed for the 1200 threshold. A hit of the 200dma will not be easy though.
--

Little to add.. broader price action remains very choppy.. but we do have the two leaders - Trans/R2K, leading the way lower.. with the Nasdaq following.