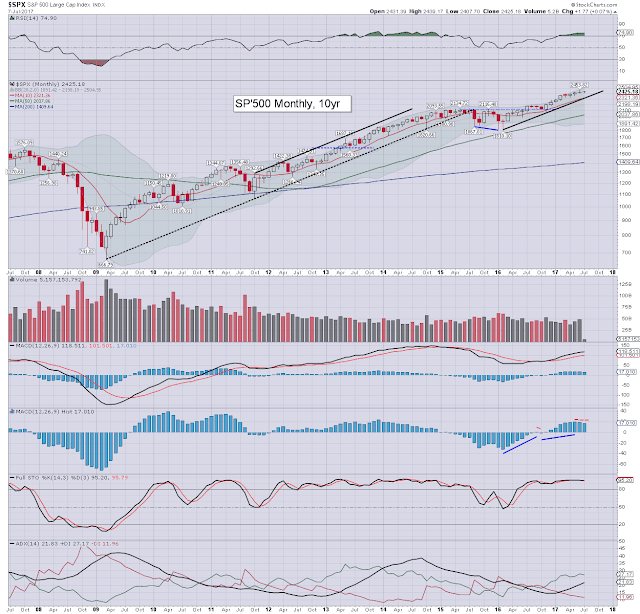 First, its notable we are net higher for the 8th of the past 9 months. Underlying MACD (blue histogram) is ticking a little lower, but price momentum is still outright bullish. Even if the market cooled from current levels, a bearish cross would be unlikely until at least October.

Best guess: near term weakness, but no more than 3% to around 2350, as earnings and econ-data continue to come in 'reasonable'. The 2500s seem probable by September, and the year end target of 2683 looks very realistic, as the fed should raise rates at least once more.

Note the key 10MA, currently at 2321, and rising by around 25pts a month. Unless we see a monthly settlement under that, equity bears (especially the crash-calling type) need to stay mute.
-- 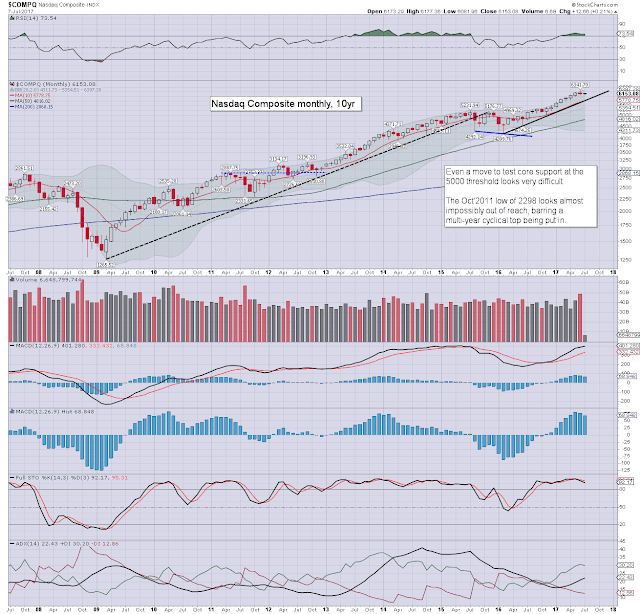 The Nasdaq saw a new historic high of 6341 in June, which is a monstrous gain of 50.6% since the Feb'2016 low of 4209. At the current rate, the Nasdaq comp' will be around 10k by late 2018. Near term is a touch weak, not least after the strong intraday downward swing of June 9th. Underlying MACD is ticking lower, but a bearish cross looks very unlikely before year end. Indeed, the 7000s seem a valid target, so long as earnings and econ-data continue to come in reasonable. 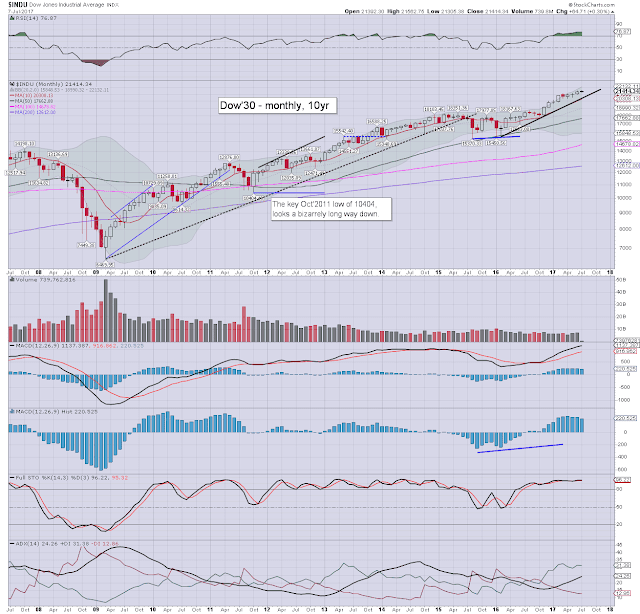 The mighty Dow is broadly super strong, and its notable we have recently seen a new historic high of 21562. The key 10MA is now above the giant psy' level of 20k, in the 20300s. By Sept' it will offer strong support around 21k.
Upper bollinger is offering the 22100s for July/August earnings. If by some miracle the market breaks support, then first target would the lower bollinger.. currently around 16k, and that is a clear 5000pts lower. 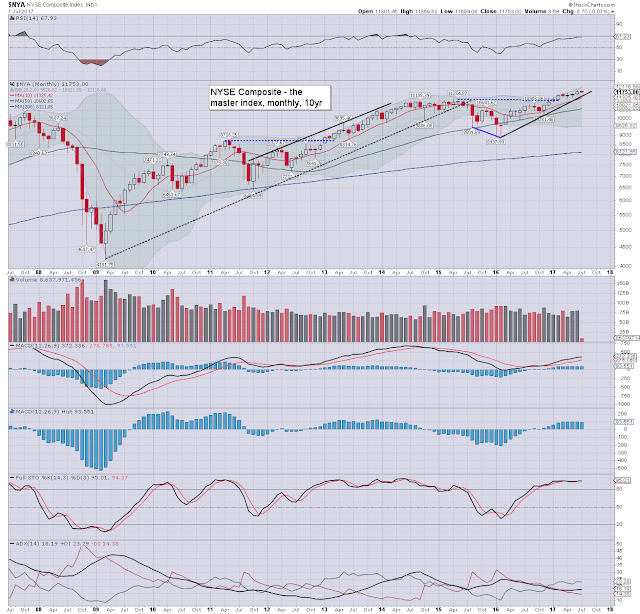 The master index is broadly climbing, having broken a new historic high of 11869. The 10MA is now in the 11300s, which look out of range in the near term. A move into the 12000s seems a given this summer. 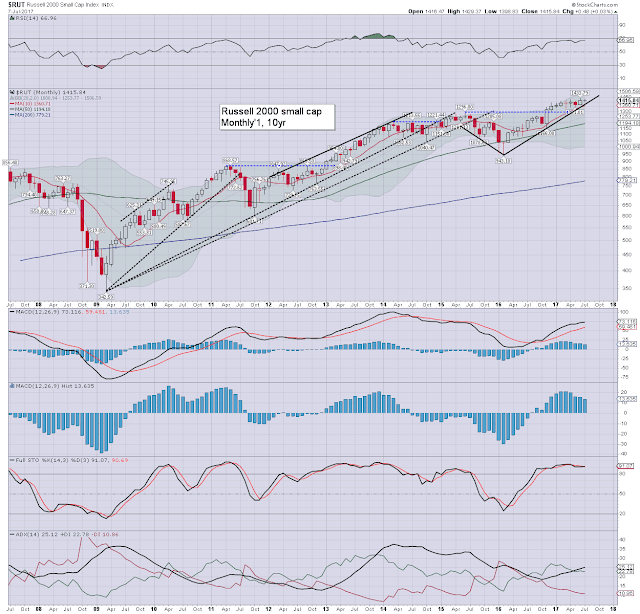 The second market leader - R2K, came very close this week to breaking a new historic high. There is threat of near term weakness, but nothing more than 3-4%. Mid term trend looks comfortably secure. Just consider that the R2K has climbed a monstrous 52.1% since the Feb'2016 low. Upper bollinger is offering the 1500s in the near term. 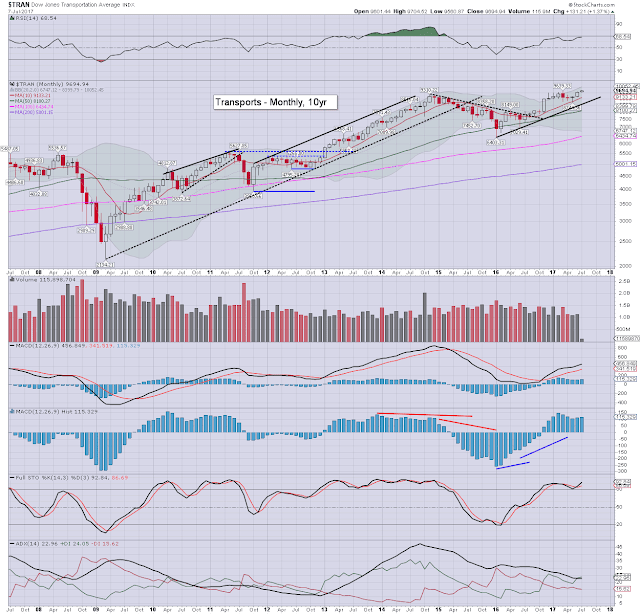 The 'old leader' - Transports, ended this week on the ultimate bullish note, with a new historic high of 9704. Clearly, mid term subdued WTIC/fuel prices will especially help the transportation stocks. The key 10MA is in the 9100s, and unless that is broken and settled under, the equity bulls have nothing to be concerned about. The giant 10k threshold does look highly probable by mid September.
--

All US equity indexes remain within their mid term upward trends from early 2016.

The Nasdaq is generally leading the market, both to the upside.. and recently, the downside.

Most indexes have around 5% of downside buffer before core trend is tested.
--

A busy week is ahead. There is some key econ-data, and we have Fed chair Yellen making two appearances, which will no doubt receive considerable media coverage.

*in addition to Yellen, there are six scheduled appearances from other fed officials, notably George (Wed'), who will be discussing the economic outlook and the fed's balance sheet.

*the next post on this page will likely appear 6pm EST on Monday.
--


This is monstrously long, but its high quality and valid analysis.

Yours truly has thought about making some chart-videos lately, but I'm already putting in 45/55 hour weeks, and I'm frankly... too gods damn tired to do much more.
Posted by Trading Sunset at 17:00:00
Email ThisBlogThis!Share to TwitterShare to FacebookShare to Pinterest
Newer Posts Older Posts Home
Subscribe to: Posts (Atom)