The US equity market began the week with a rather significant fall, but the remainder of the week was mostly sideways chop. Equity bears remain largely powerless, and there looks to be further upside of 5-7% for most indexes by the late spring.


Lets take a look at six of the US indexes 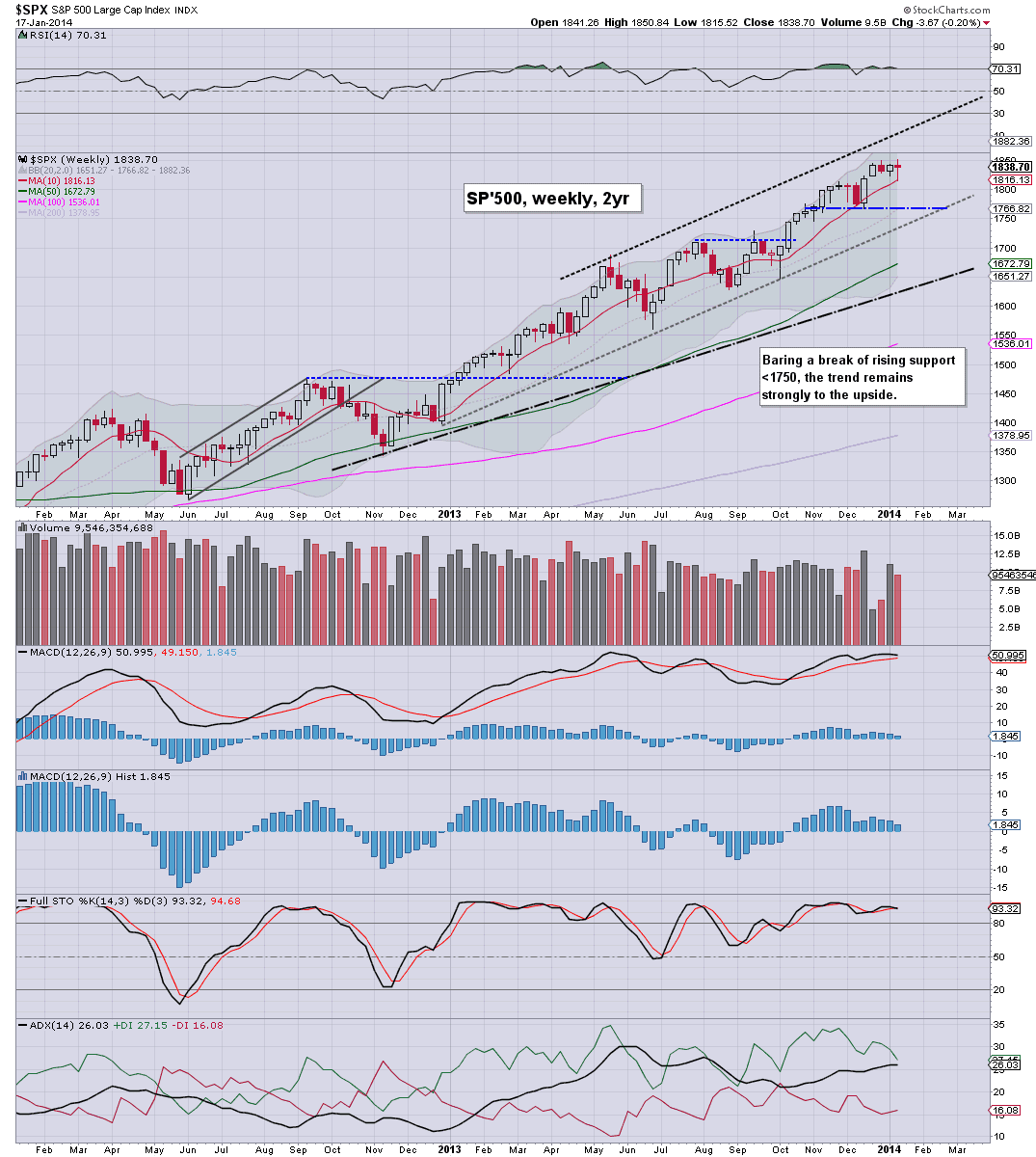 Despite the significant decline on Monday, the net weekly decline was only -0.2%. Indeed, the 10MA is holding as support, and the sp' looks set for the 1860/80 zone by end month. Underlying MACD (blue bar histogram) ticked lower for a third week..and is currently set to go negative cycle within the next 1-2 weeks.

So..we do have a small warning sign of underlying rally exhaustion, but whilst prices are holding the 10MA...- with 1815 the new floor, the equity bears can't be the least bit confident of a multi-month top...yet. 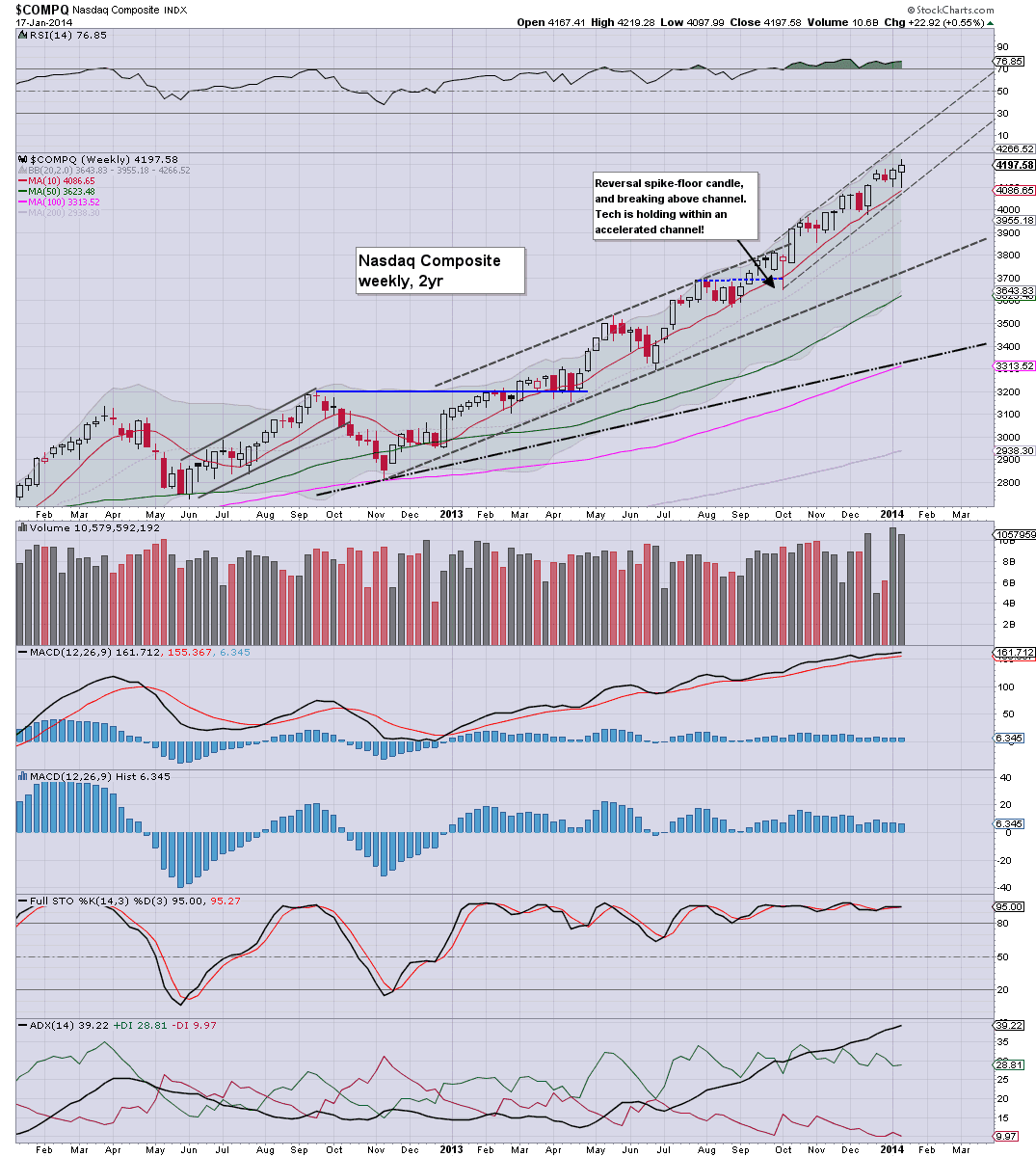 The tech' managed a very impressive gain of 0.5% this week, and is on track for the 4300s into February.  Underlying MACD (blue bar histogram) ticked a little lower, but still...prices are broadly rising, with good support at the 10MA. I do not expect a new historic high (>5132, March 2000), until next year. 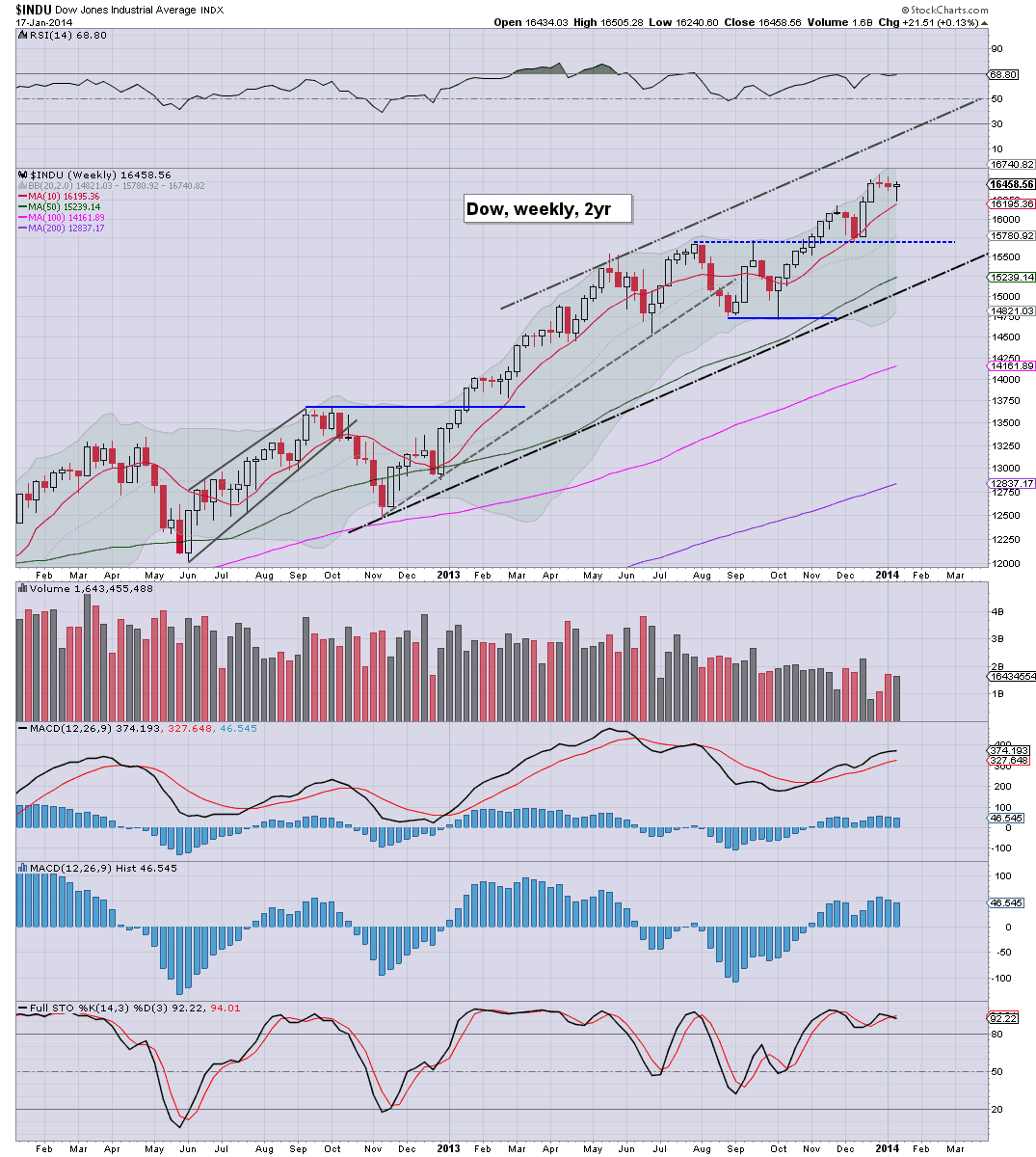 The mighty Dow clawed a net weekly gain of 21pts this week, and looks to have a baby bull flag on the weekly cycle. There looks to be comfortable upside to the 16700/800s in the next few weeks. The 17000s look very viable by late spring. 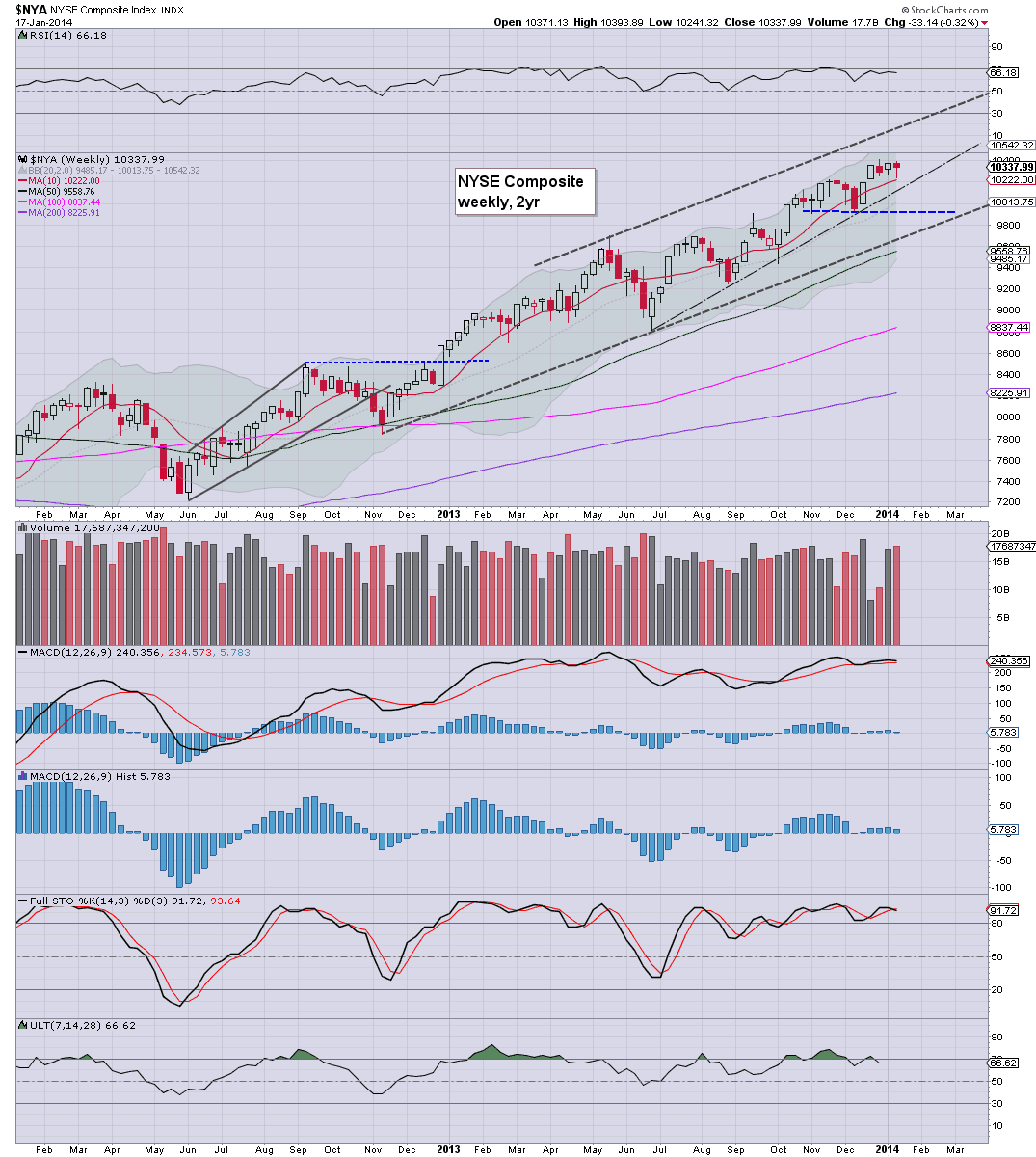 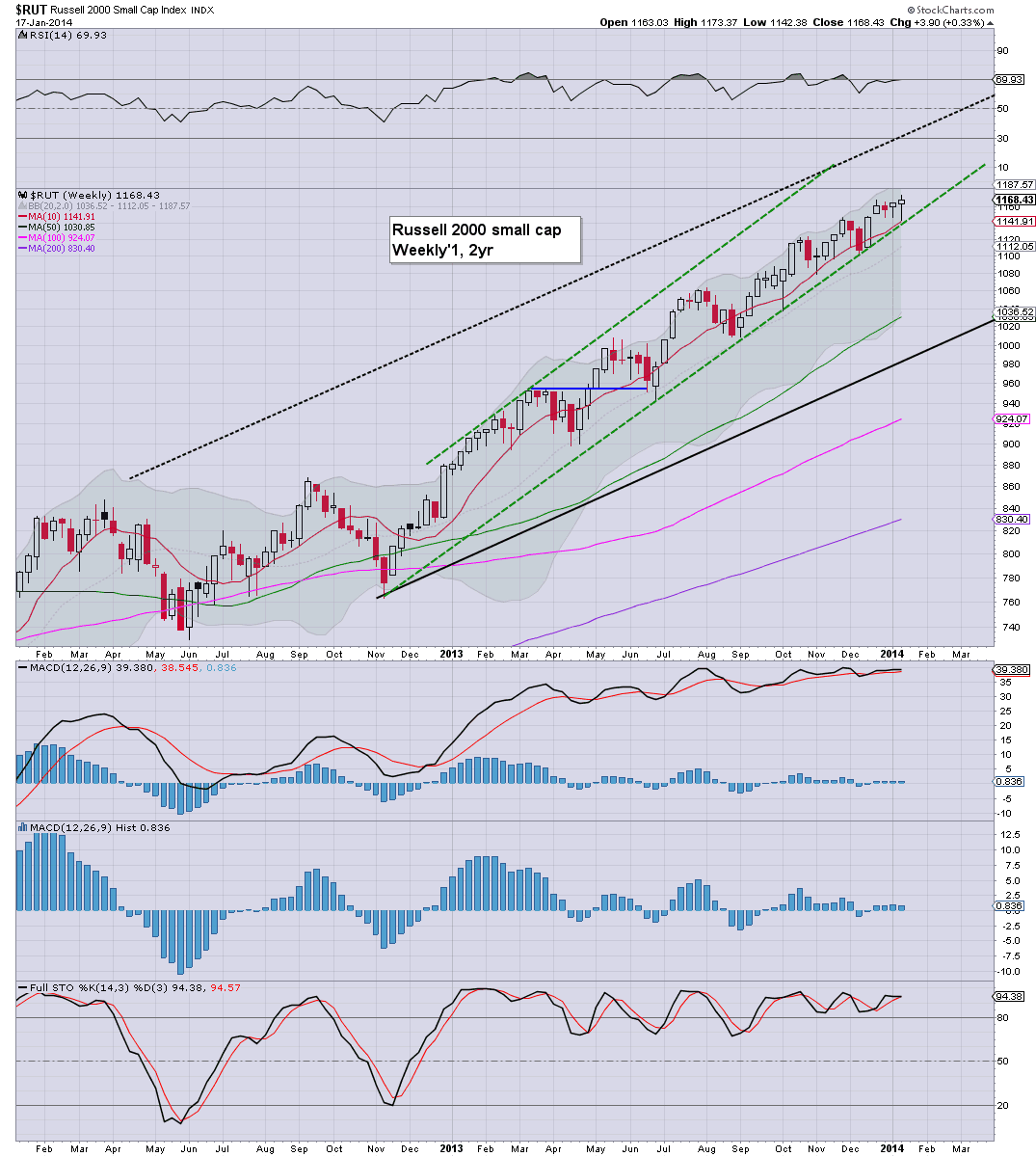 The second market leader climbed a very impressive 0.3% this week, and looks set for the 1200s in Feb/March. The broader up trend from Nov'2012 continues to hold, and this remains a remarkably bullish index. There is absolutely nothing bearish here, and the 1300s look just about viable by late spring..before an intermediate top. 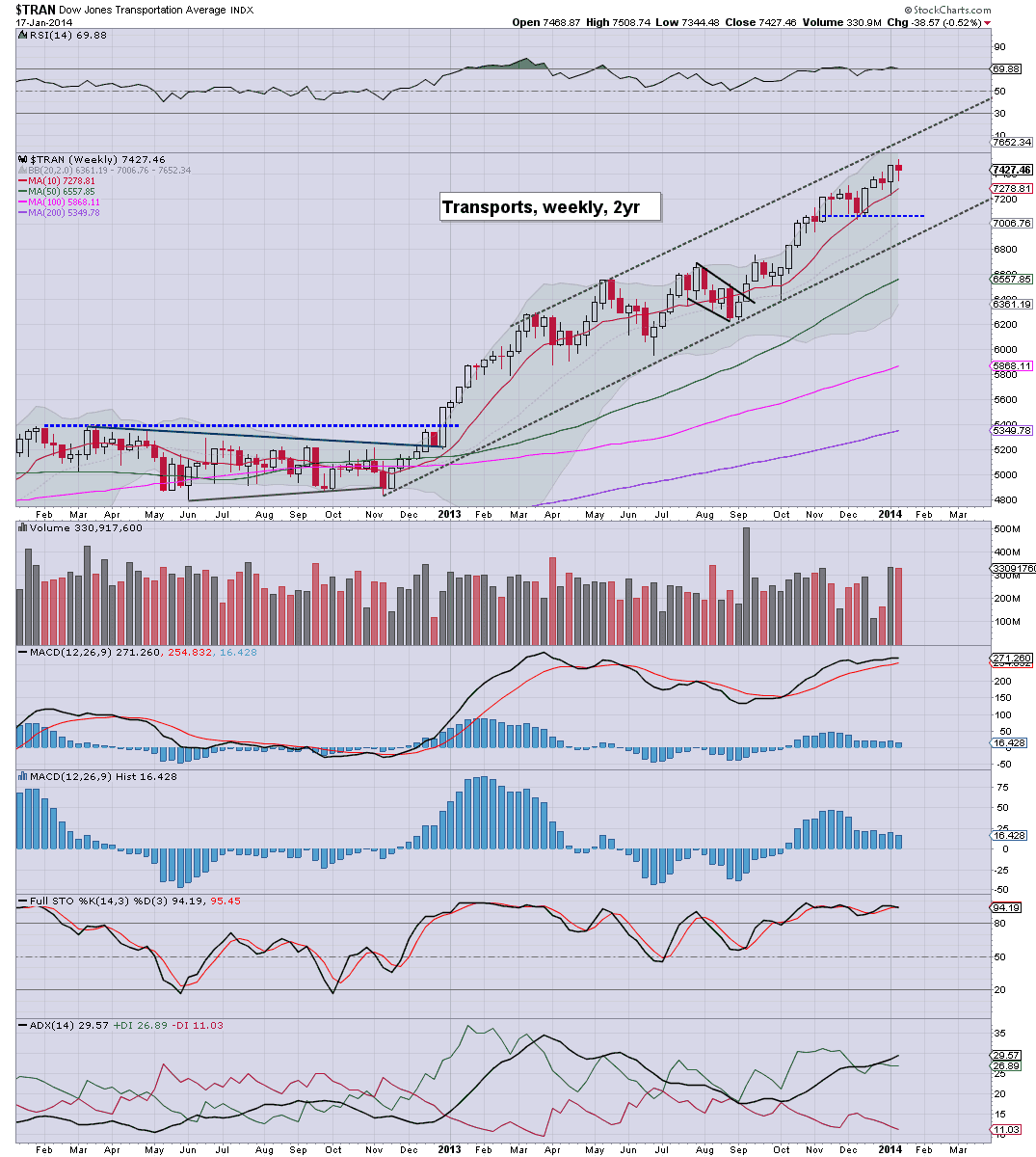 The old leader slipped -0.5% this week, but did break a new historic high of 7508 - which is 50% higher than a year ago...incredible! The upper bollinger will be offering the 7700s in a few weeks, and the only issue now is whether Trans can hit 8000s..before the next intermediate correction.

The significant declines of Monday were largely negated for most indexes, and all things considered, the bears had another chance to break the market..and dismally failed. The weekly 10MA continues to act as good support for most indexes.

Yes, the underlying price momentum is weaker than it was, but prices are still generally rising, and there looks to be another 5-7% higher for most indexes by late spring.

It will be a shortened week, with the US market CLOSED on Monday.

The rest of the week is very much empty of anything major. Only Thursday will see the weekly jobs data, home sales, and leading indicators. Aside from that, there isn't anything of importance, and neither are there any Fed officials on the loose.

There will of course be a truck load of corporate earnings data.

As ever, comments are welcome. I am always looking for new blog/chart links to add, so let me know if you think something should be added.

back on Monday (yes, we're closed then, but there is always something to cover)
Posted by Trading Sunset at 17:00:00
Email ThisBlogThis!Share to TwitterShare to FacebookShare to Pinterest

Dwelling on the moon

The week began with a brief...but significant down wave, yet, as has generally been the case for the last few years, the market recovered most of the declines the very next day. Regardless of the near term...the bigger issue remains..just how high can this madness go? 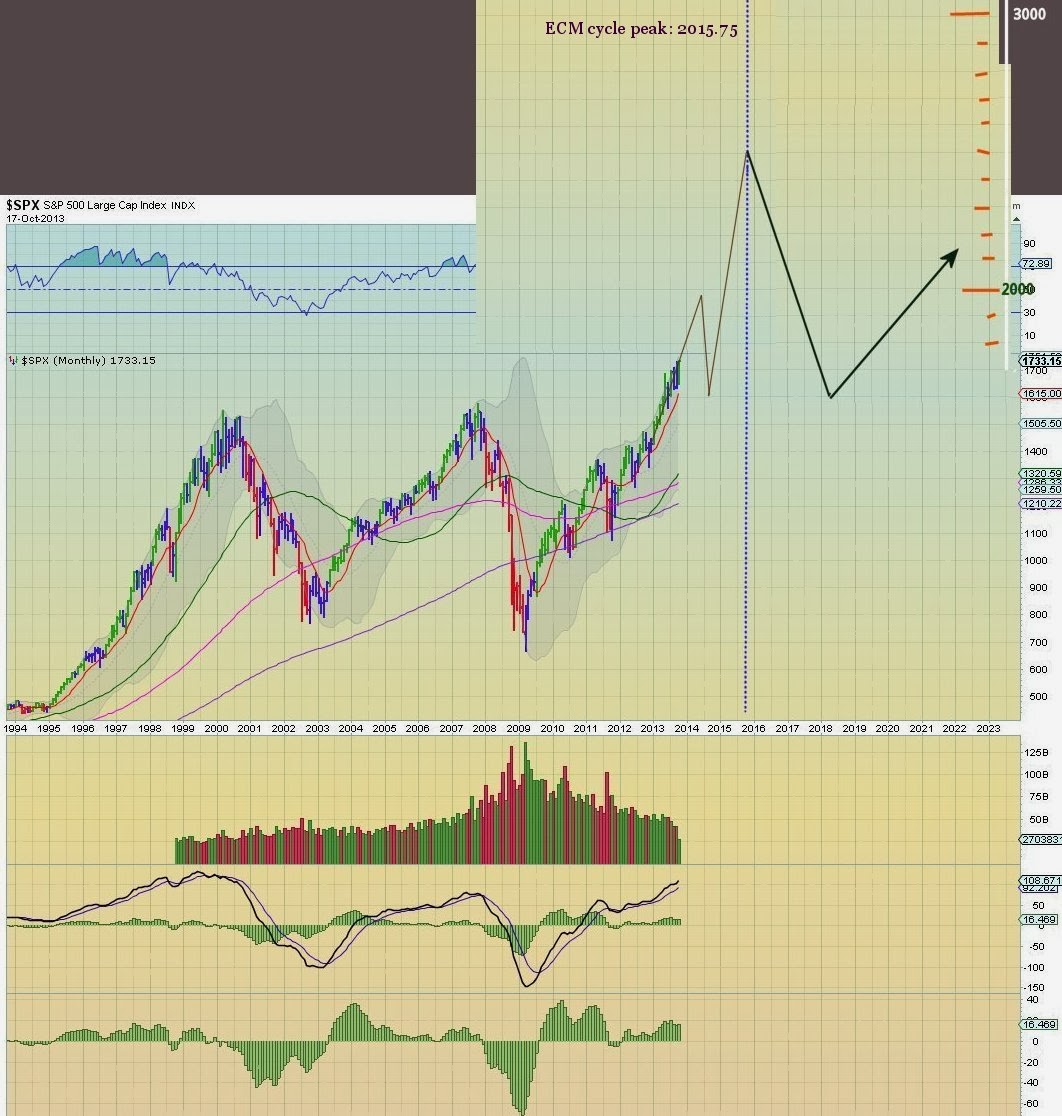 I think the above chart will suffice to close the week.

I first posted the 'moon madness' chart three months ago. Since then, we're around 100pts higher, and I'd guess we have another 125pts or so to go..across the next 3/4 months. That is only another 7% higher, so its not exactly the most bold of upside targets.
--

Frankly, it remains my 'best guess' for the mid term, as disturbing as it might look.

Goodnight from London
-
*the weekend post - late Saturday, will be on the US weekly indexes
Posted by Trading Sunset at 04:00:00
Email ThisBlogThis!Share to TwitterShare to FacebookShare to Pinterest 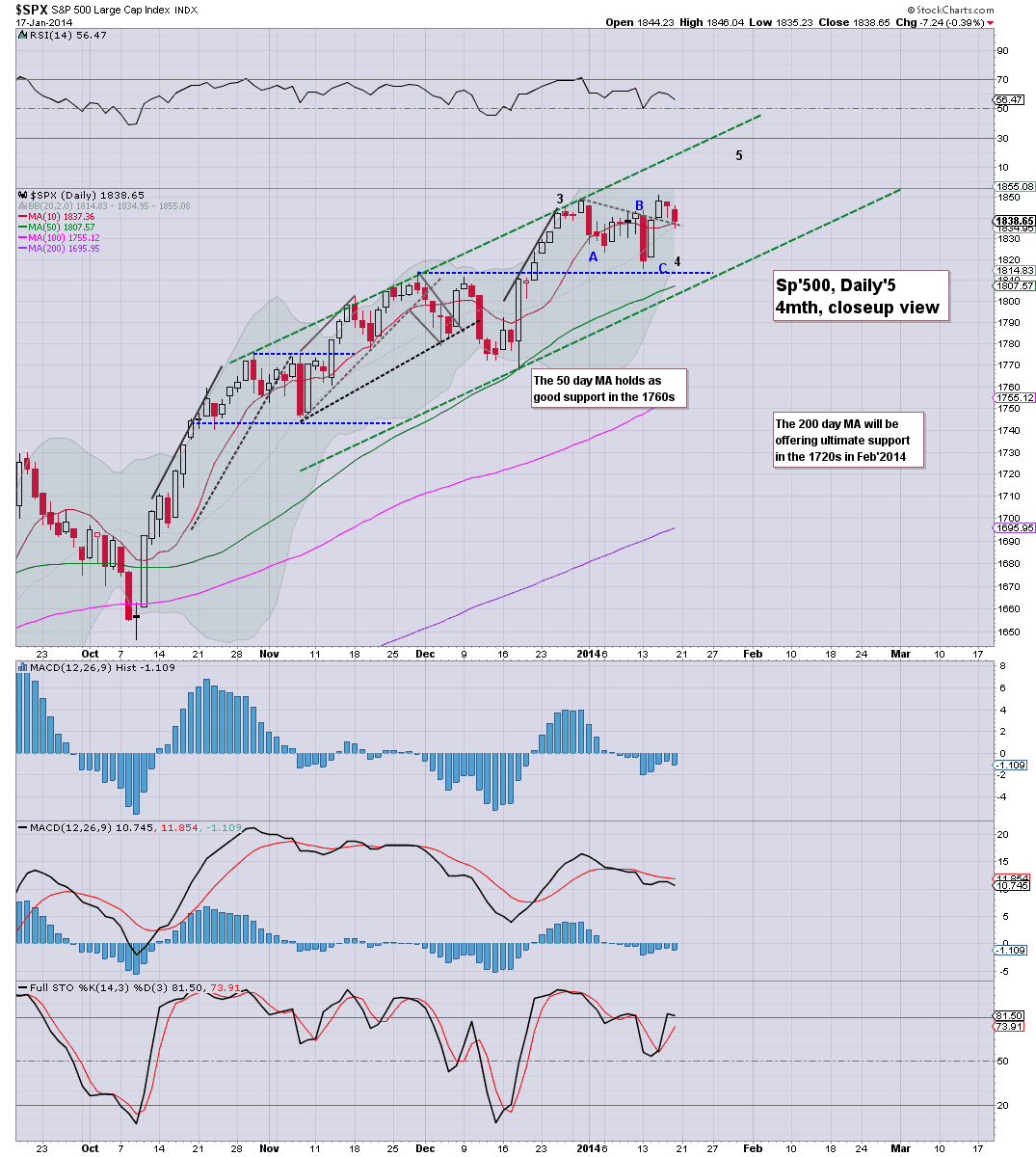 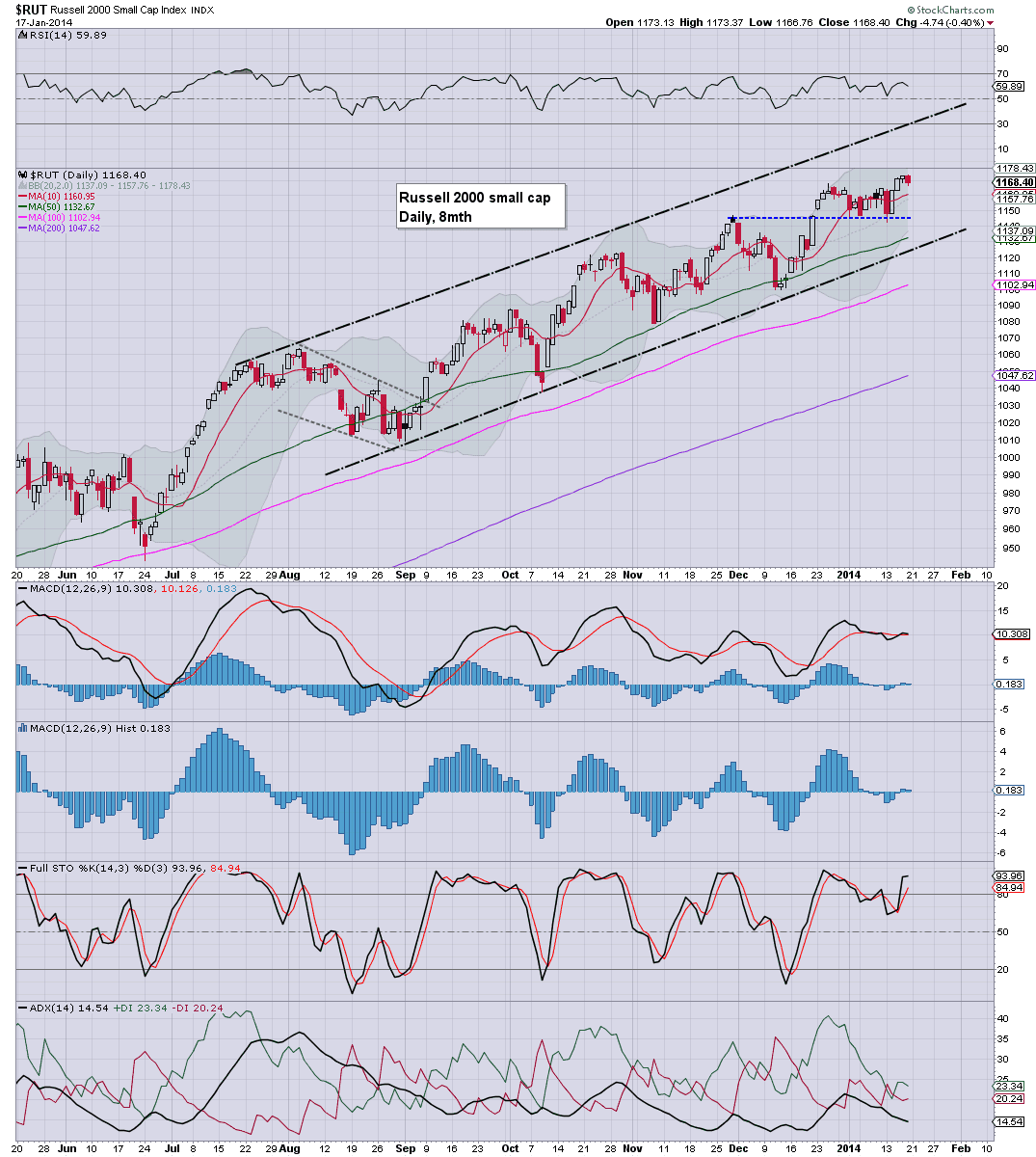 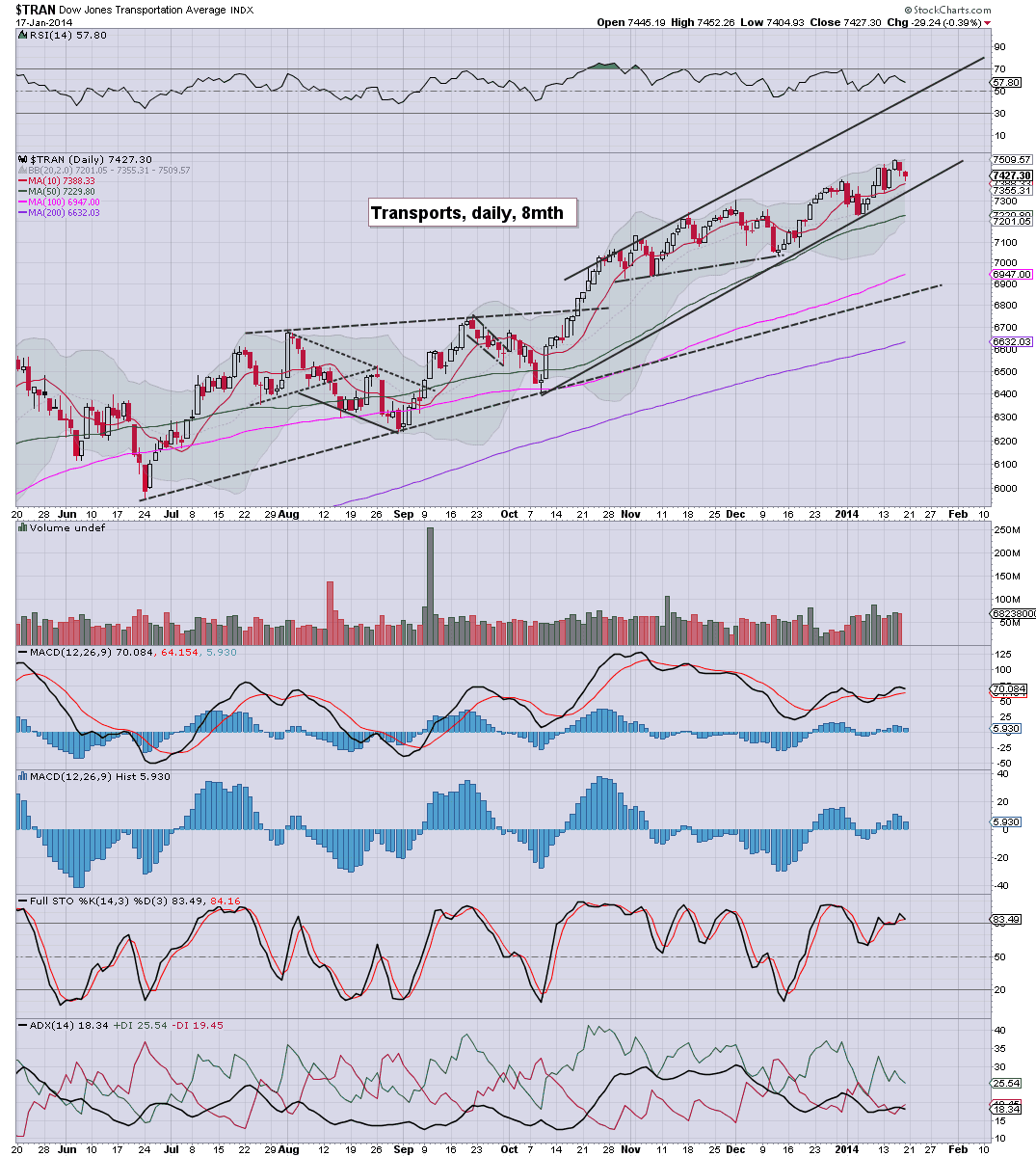 It has been a choppy few weeks for US equities. Crucially, the bears are still unable to string together a few significant consecutive down days. This is likely just consolidation across time before the next lurch into the sp'1860/80 zone..by end month.

In some ways, the real question is when will the sp'1900s be hit? That seems a given..the only issue is whether its before the next moderate down cycle - which I'm guessing will be around 3-4%...no later than mid February.

The big picture remains unchanged. General upside into the late spring..before the opportunity of a major correction. We're sure due one.