The US equity market saw its first significant downside action of the year, with the main indexes falling between 1.7 and 3.2%. The initial weakness that appeared a few weeks ago has been confirmed, and there is now a high probability of much lower levels across the next few weeks. 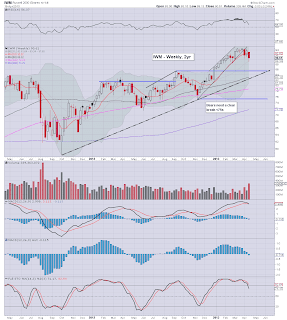 The second market leading index saw the worse declines of 3.2%. Clearly the weekly fall is still not 'that bad', since it barely dents the huge rally so far this year. Yet, the declines seen this week showed some real power on the downside.

The R2K is now negative cycle on the MACD (blue bar histogram), and there is an easy 4-6 weeks viable to the downside, without any concerns of a new multi-month up wave. Bears should be seeking 85/84 in the immediate time frame. Whether we can break under the Nov' low of 75s, that is the big unknown. 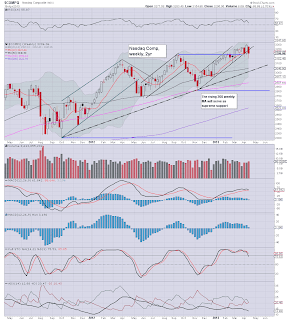 The laggy tech sector weakened by 2.7%, but did at least hold above what used to be a key resistance high in the 3200s.  The Nasdaq Composite looks set to go negative cycle on the MACD next week. Primary target will be the psy level of 3000, that's only 6-7% lower. 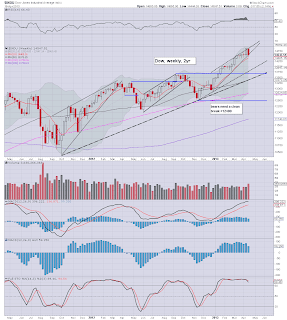 The mighty Dow index remains one very resilient index. Interestingly though, with IBM failing badly on Q1 revenue expectations, the Dow was actually the laggard on Friday.

Primary downside target is 14000. If we can break that, which I believe is very likely, then 13k will be viable by late May. So, in general, I'm seeking a 10% fall for the Dow, before the next 'big bounce' into June/July. 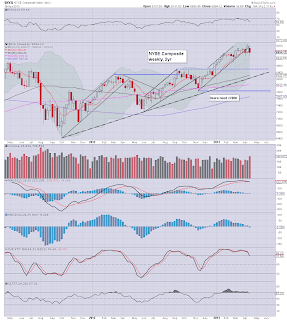 The master index slipped just over 2% this week, and it has seen the MACD cycle go negative - just like the R2K. Near term trend is seeking the old resistance high in the 8500s, that's around 5-6% lower. 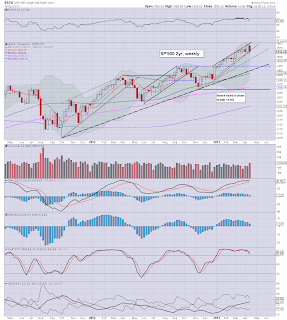 Its just 7 trading days since the 1597 high, and it IS now surely the case that the 'high is in' for this multi-month wave. It appears we've just seen the first initial wave'1 down this week, and we're on day'1 of a small wave'2 bounce - that looks set to complete in just a few more days.

Primary downside target is around the old resistance/highs of Sept'2012 in the 1480/70s. It remains important to note the rising weekly lower bollinger band - currently @ 1396. That will probably continue to rise across the next few weeks, and it will be VERY hard to be trading any lower than 1440/30 by late May.

Underlying MACD cycle is still another week or two from going negative, but the trend is very bearish into May. 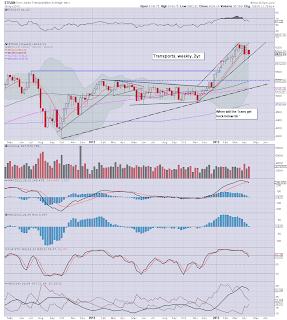 The old leader saw some very strong moves in the week, with a 4% decline on Wednesday, before rallying into the weekend.

Tranny looks set to go negative MACD cycle this coming week, and there is good downside to the old breakout level in the 5400s, that is a good 10% lower. The lower bol' band is in the 5100s, but its rising fast, and it will be real difficult for the bears to trade <5400 in this down cycle. What I am pretty sure of, no one matter how strong the bears push lower in May, Transports will surely hold the big psy' level of 5000.

So, some interesting declines for the US market. Certainly its nothing significant yet, but the signs ARE there of some real downside ahead.

Baring a break above the recent sp'1597 high - with confirming new highs on the Transports and R2K, I will have no concern about 'shorting..and re-shorting' this market into the latter part of May. 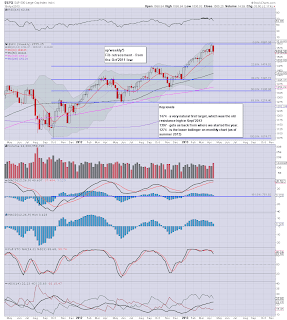 The above is a rather simple Fibonacci chart, but I think its important to keep it in mind across the next few months. Those bears who think a 'grand' multi-year top is in, should be seeking a break under the 38% fib @ 1397, and preferably breaking the Nov' low of sp'1343. The latter seems very unlikely any time soon though.

The more 'realistic' doomer bears should first merely be seeking a hit on the weekly lower bollinger, currently 1396 - but still rising. A major bounce from such a hit, would then be a near certainty for 'easy money' on the upside. 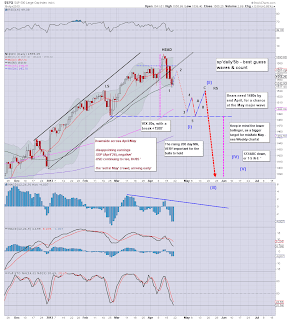 The above outlook is predicated on the notion that 1597 was the high, and that we've just seen a wave'1 lower. A wave'2 shouldn't last more than 2-3 days, since wave'1 itself only took 5-6 days to complete.

The 1480s are the old February low, and they are also around key daily Fib' retracement levels - from the November low. As things are, the conservative outlook is for a 'swift move' to the 1490/80s, before a minor bounce into mid May - which might go as high as the 1530/40s.

Were things to go in that manner, then what comes next would be the 'main event'. However, one day at a time. Lets see if we can break <1500 before April concludes.

There is a sprinkling of econ-data next week. Personally, I will look for weakness in Wednesdays durable goods orders, and also via the EIA Oil report. However, the big data point of the week is the Q1 GDP first 'guess'- due this Friday.

I am seeking a major re-short in the low sp'1570s - with VIX 14/13s. Right now, it'd seem that is more likely late Tuesday, but I will be keeping a broad eye on many other indicators, such as the VIX, USD, and even the Oil price.

I will be looking at shorting the indexes, long VIX, and also short Oil (via USO)

Mon/Tue - re-shorting
Wed - initial small wave'1 of 3
Thur - small bounce, 2 of 3
Fri - very significant 3 down wave, which should be stronger than the down wave seen this past Wednesday. I'd be seeking an sp -35/45pts day, with VIX in the low 20s.

In theory, there should also be a minor 4, and a 5. With the next FOMC due April'30-May'1, its going to get real messy as we move into May.

*considering there is still a very strong medium term 'buy the dip' mentality out there, the bears should probably 'cash in' at the end of any major daily decline. As we've just seen, the bounces are usually pretty strong.
--

Next week will probably be a busy one. I'm going to try and get some rest.

Here is one video from the weekend - by 'oldschoolchartist', whom interestingly does a summary of what I am seeking across the next month or so.

*I usually refrain from highlighting anything from subscription based sites, but I think if you give it 5-10 mins, its essentially an exact version of my outlook. It did amuse me, seeing it.

After a very turbulent week, the indexes closed the week with a rally. Most indexes closed around 1% higher, although the Dow was effectively flat, with IBM holding it back. Near term trend looks like another day or two of upside, before some severe declines within 5-7 days. 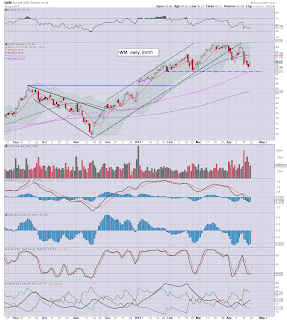 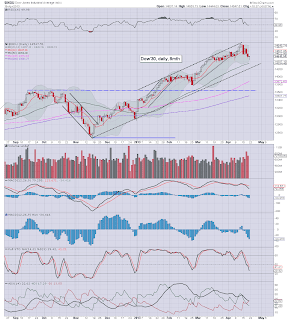 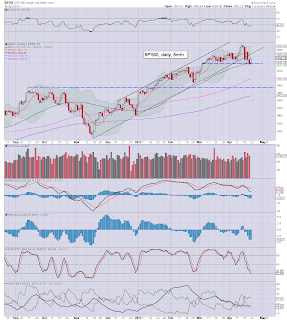 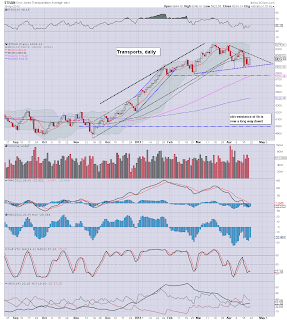 Well, it was certainly a good week for the bears, and especially those who are seeking a multi-month cyclical top.

It is now looking like we have had a very clean 5 little waves to the downside - forming a 1, and now we're seeing a 2-3 day bounce.

So long as the bears can contain the bounce below the previous high of 1597, then the market looks set for what could be a rather exciting wave'3 down.

My best guess is that we'll simply form a RS in the low sp'1570s next week, but as ever, it will be important to keep an open mind, and watch those hourly charts - including the VIX.

I am patiently on the sidelines, and seeking a major re-short next Tuesday afternoon.

That's all for today, have a good weekend :)
--
*next main posting, late Saturday, on the US weekly index charts.
Posted by Trading Sunset at 01:00:00
Email ThisBlogThis!Share to TwitterShare to FacebookShare to Pinterest
Newer Posts Older Posts Home
Subscribe to: Posts (Atom)