With the jobs data coming in above consensus, the main indexes opened higher..and despite a morning fail..the market once again saw a latter day recovery rally. The VIX was weak across the day, closing -3.6%  @ 12.59. Across the week, the VIX lost 18% 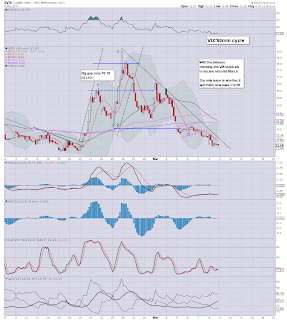 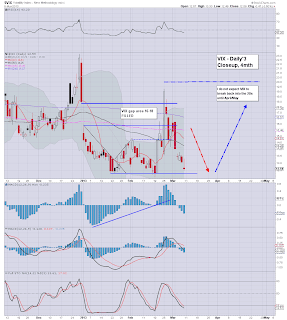 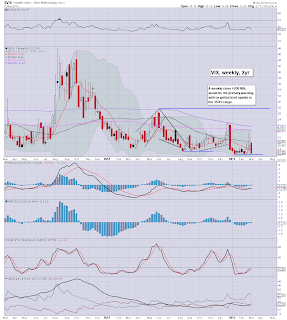 The hourly charts show very consistent weakness in the VIX. This matches the relentless climb in the main equity indexes.

A break into the VIX 11s is very viable next week..although I believe it'll mark the low..perhaps 'THE low' of this grand cycle. Impossible to know right now.

What is clear..if the equity indexes do rollover into April/May, -with sp' in the low 1400s..the VIX is going to bust over the big 20 threshold.


*as things are, there is no hurry for bears to be re-shorting the indexes..or long VIX..yet.  I'm considering next Tue/Wed..but would actually think after March opex (Fri' 15'th) is the much more sensible idea.

Today was the sixth consecutive higher close for the sp'500. A four month major wave higher - from the November sp'1343 low, looks to be in its last few days. However, there is absolutely NO clear turn..or levelling phase yet. We could easily take a few weeks to churn out a top. 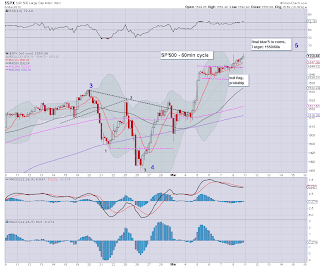 A close in the sp'1550s certainly looks super bullish. The headline jobs data looks good (well, to those who don't read beyond the main numbers)...and the mainstream are filled with hope for a 'rally without end'.

I am looking forward to seeing the next down wave. I don't expect more than 7-9%..but it should be tradeable across the early spring.
--

The usual bits and pieces to wrap up the week, across the evening...

Have a good weekend :)

--
*next main post, late Saturday, on the US monthly indexes
Posted by Trading Sunset at 21:00:00
Email ThisBlogThis!Share to TwitterShare to FacebookShare to Pinterest

Low volume algo-bot melt continues. A close in the sp'1550s looks likely..and that opens up a little last-gasp climb to the 1560s next week. The monthly charts offer 1570, but that will be difficult...as the weekly cycle already looks toppy. 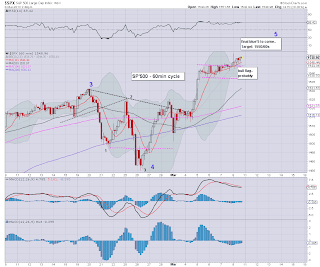 A long week, but its gone broadly as expected..and its always good to at least see an outlook work out.

In fact, many chartists correctly have been seeking this fifth minor wave higher.

Not that the mainstream...not least CNBC have the slightest clue. I can only imagine their horror if we are trading back in the low 1400s by May.

*doesn't look like SLV will do much in the closing hour. I will close the week..very pleased...and holding no positions over the weekend.

Not much going on after the morning action. Most significant remains the strength in the USD. VIX remains weak, -3%. A spike lower into the 11s is viable at any point, and does seem quite likely if the market can hold these levels into the middle of next week. 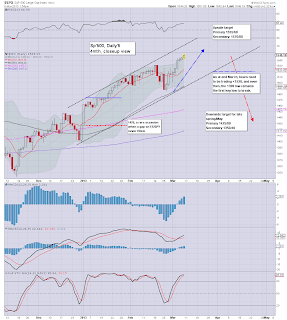 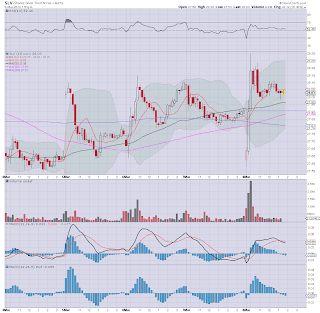 Not much to say, its just the usual case of seeing how much the algo-bots can melt it higher, maybe a few points. Sp'1550s is viable.
--

back at 3pm...I guess.
Posted by Trading Sunset at 18:55:00
Email ThisBlogThis!Share to TwitterShare to FacebookShare to Pinterest

12pm update - melting into the weekend

A bit of a choppy morning. Initial gains did significantly fail..but with no power on the bearish side (yet), the bulls are very likely going to simply melt this market higher into the weekend. The USD is very strong @ 82.78...the monthly charts are offering 83.50. VIX is naturally weak, -4% 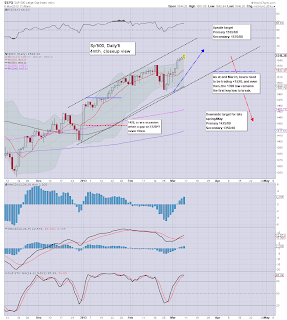 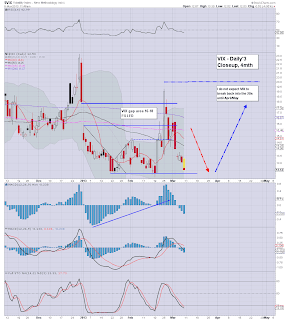 Yes, the jobs data remains DIRE - if you read behind the headline numbers, but hey..the mainstream are still largely falling for it.

Underlying MACD cycle on both the indexes and VIX remain consistant. Its going to be at least the middle of next week until there is any sign of this levelling out. Next Friday is opex...maybe the market makers will want to pin everything around sp'1550 ?

I remain open to starting a re-short of the indexes in the sp'1560s..but not for at least a few more days.


back at 2pm
Posted by Trading Sunset at 16:54:00
Email ThisBlogThis!Share to TwitterShare to FacebookShare to Pinterest

Good morning. With the jobs data coming in much better than the crowd expected, we indeed have jumped higher straight into the 1550s.The Rus'2000 index is suggesting this opening rally is already failing. Dollar is significantly higher, metals were whacked lower in pre-market. 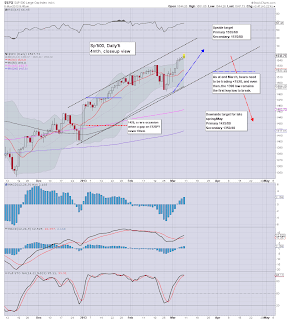 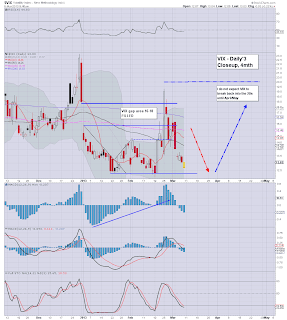 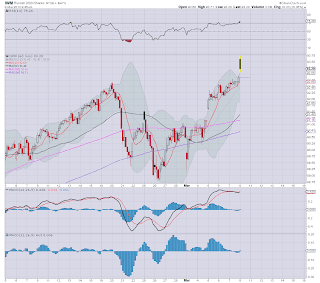 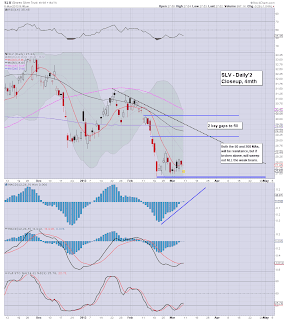 I'm adding at that level, the 29s remain the target.

--
There is no hurry, and I sure won't be shorting the market into the weekend.

I'm actually kinda amazed at the power of the reversal in the metals. 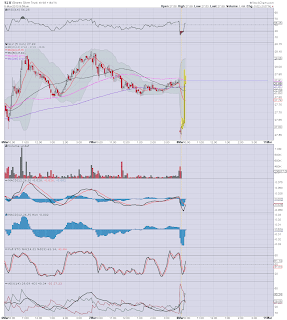 I'll look to close out later in the day.. 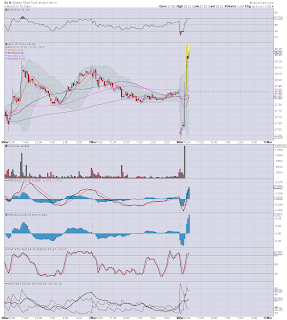 underlying daily trend is STILL upward though, so I'm guessing we melt higher into the close.
-- 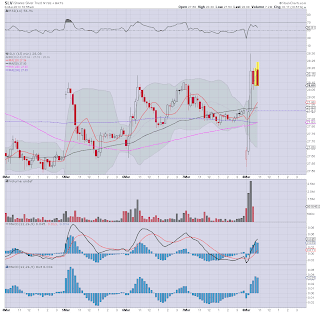 Anything in the 27.80s...would be awfully tempting
Posted by Trading Sunset at 14:48:00
Email ThisBlogThis!Share to TwitterShare to FacebookShare to Pinterest

Seeking a near term top

A quiet day in market land. Everyone seems resigned to another 1-2% higher in the sp'500 to 1550/60, before there is the opportunity of a moderate wave lower. As ever, even if there is a down wave this spring, I would have to assume the market will merely put in yet another higher low. 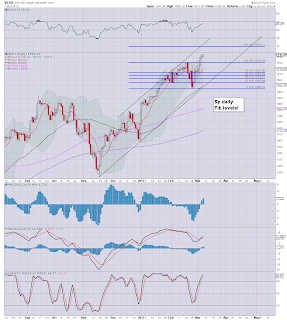 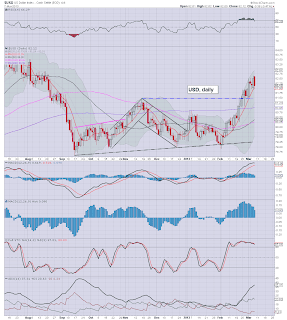 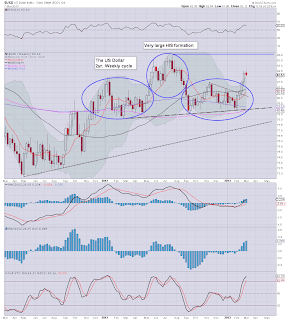 Both the daily and monthly fib charts suggest sp'1550/60s as a very valid target for this cycle. The monthly upper bollinger is now offering 1570s.

One thing in the bulls favour though is the USD. Now, the trend is clearly UP - which is bearish for equities, but we're arguably overbought. USD could easily cycle lower for a week or two.

Perhaps the market will put in a choppy top lasting into the second half of March..before seeing the a wave lower?
-- 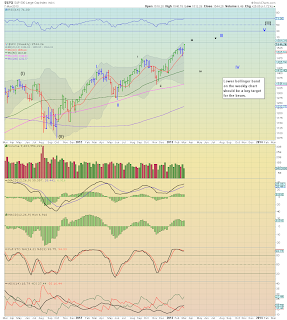 The chart above is part of a hyper-bullish scenario that I am trying to keep in mind. I've actually seen the same kinda outlook mentioned by a few others lately.

The key issue I would like to highlight is the next wave lower. On any basis, the most natural target would be the lower bollinger band (weekly cycle) - which itself will be turning upward in the next week or two.

By April/early May, we're probably looking at the market getting stuck around 1425/00, that remains my best guess. On any basis, we'll then likely cycle back higher again..perhaps completing a larger wave'3 (blue) around August/Sept' in the mid 1600s

At this point though..its merely 'academic interest'. First...we'll need to see if the market can break under the lower channel (see daily charts), which by end March is sp'1520)
--

Regardless of all the other variables out there - such as Merkel getting the kick this Autumn, until the Fed end the QE-POMO, I find it difficult to imagine this market seeing a sequence of down cycles into 2014.

Friday will be all about what the headline jobs data is. Anything >180k is very likely to satisfy the bull maniacs, and would offer a potential gap right into the mid 1550s, even 1560s.

Regardless of price action tomorrow, I won't be shorting into the weekend, no point, not least for the option players.

That's all for today!

A very quiet day in the US markets. As usual, a little latter day melt higher, with most indexes closing slightly higher. The notable exception was the transports which declined for the second consecutive day by 0.5%  The lower VIX confirmed the continued underlying upward trend. 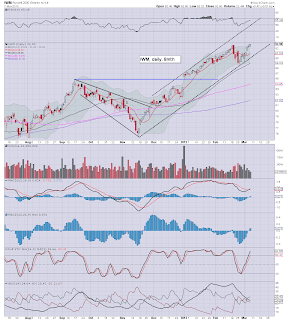 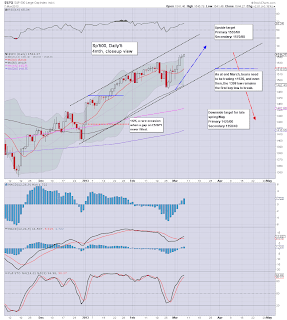 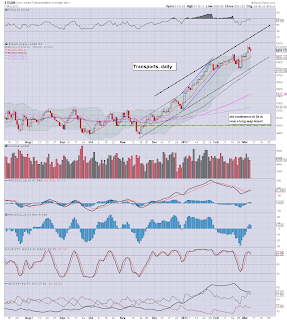 From a MACD (blue bar histogram) cycle perspective, today was day'7 UP. Thats getting a little over-stretched, perhaps there will be another 2-3 days..but then this cycle will VERY likely be complete.

In the bigger picture..that'd complete a wave that began last November @ sp'1343.

As ever..the only issue is then..how far can we drop.

Considering the last four years, you'd have to assume we'll merely put in yet another higher low..somewhere in the sp'1425/00.