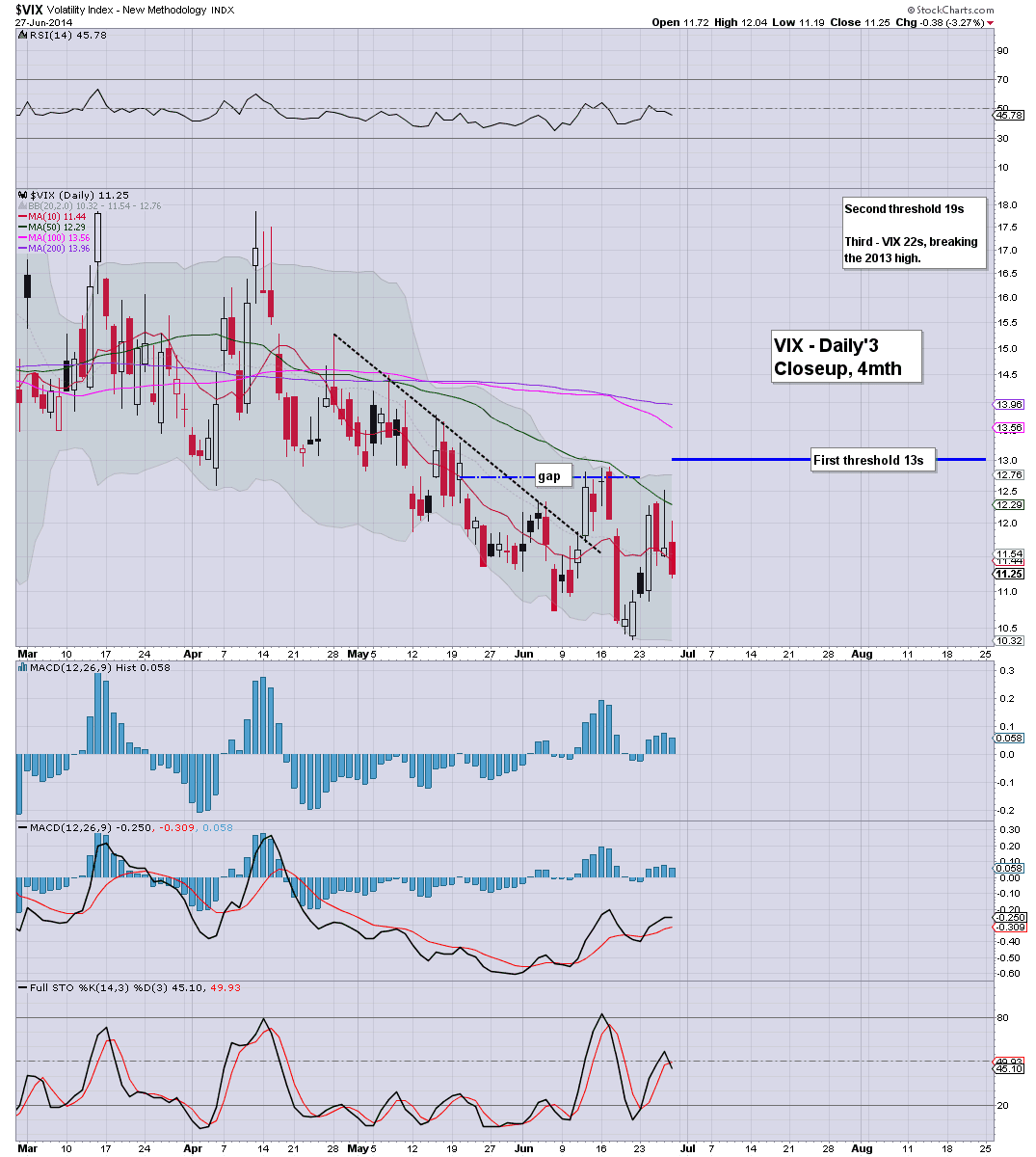 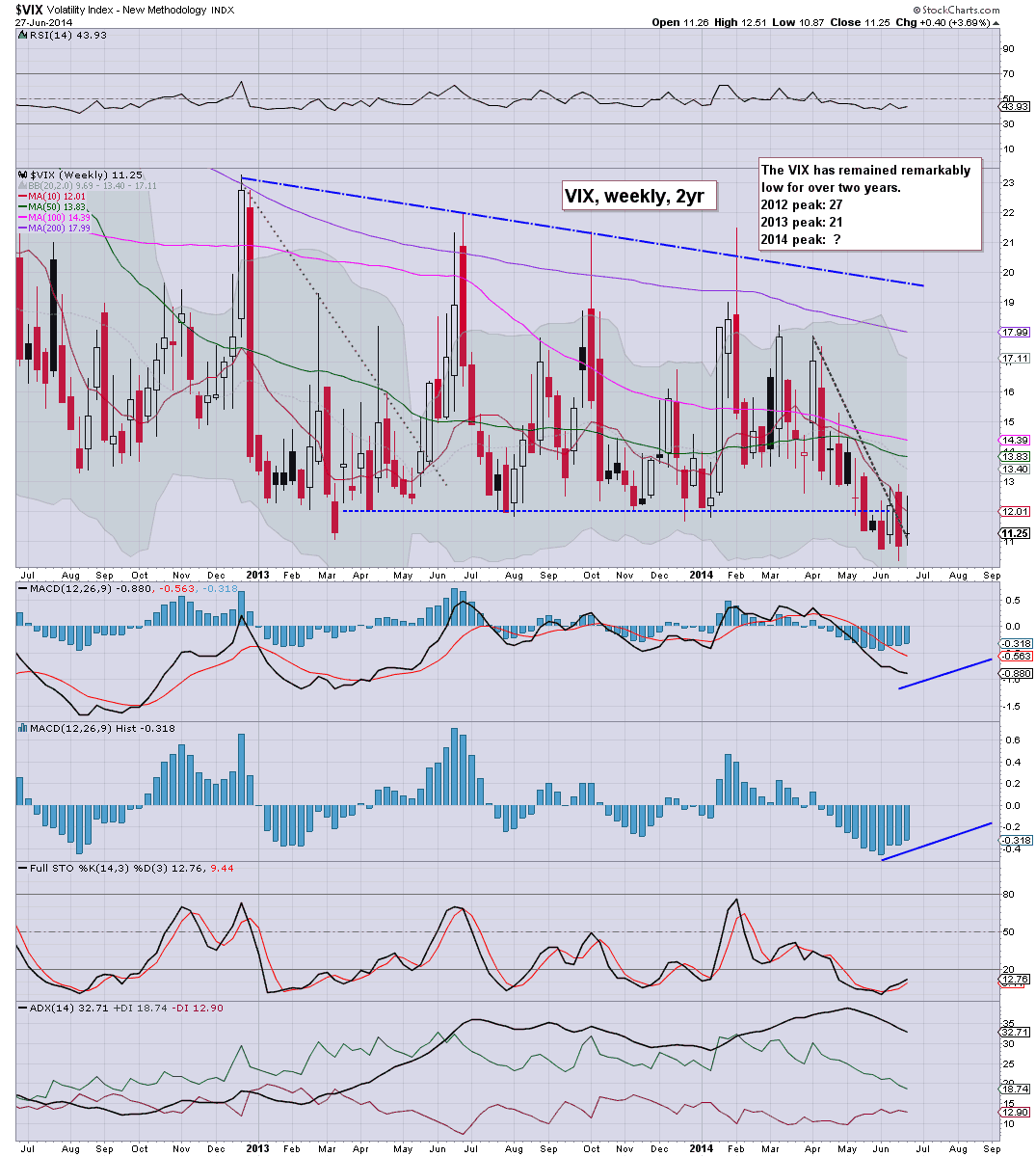 Suffice to say, VIX remains low, even the mid teens look out of range until late July.

The bigger question is can the VIX break into the 20s by late summer? VIX 22s would break last years high (21.90s), and would be highly suggestive of 'something new' in terms of downside equity price action.

For the moment, I've zero interest in picking up any VIX long positions...at least until mid July.
- 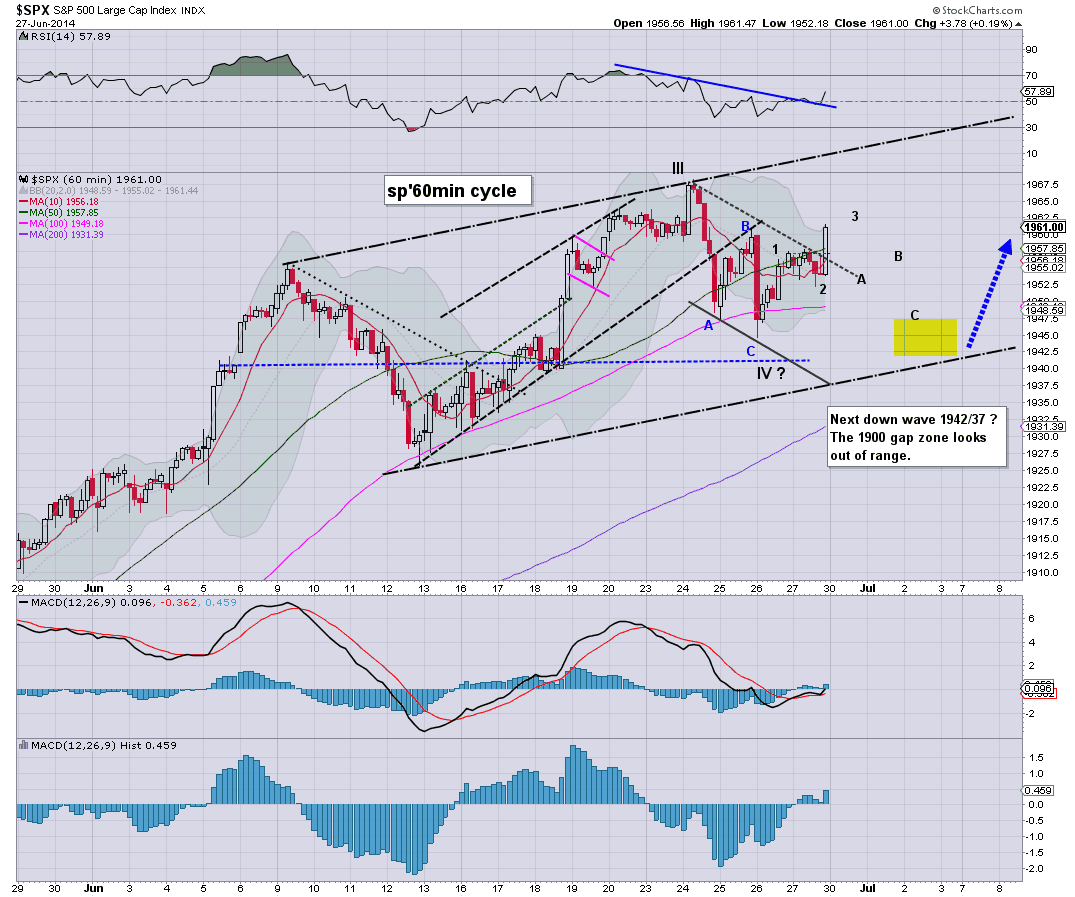 I'm somewhat dismissive of my own vain attempt at counting this nonsense......regardless.. the broader trend remains UP.
--

Thanks to all those who said hello this week :)

*The usual bits and pieces across the evening.. to wrap up the trading day.
-

**the weekend update will be on the US weekly indexes
Posted by Trading Sunset at 21:03:00
Email ThisBlogThis!Share to TwitterShare to FacebookShare to Pinterest

3pm update - time for a rebalancing

US indexes look set for minor chop, with perhaps a touch of weakness into the Friday close. There is a notable rebalancing of three of the Russell indexes..and that will likely result in huge trading vol' near the close (or shortly after). 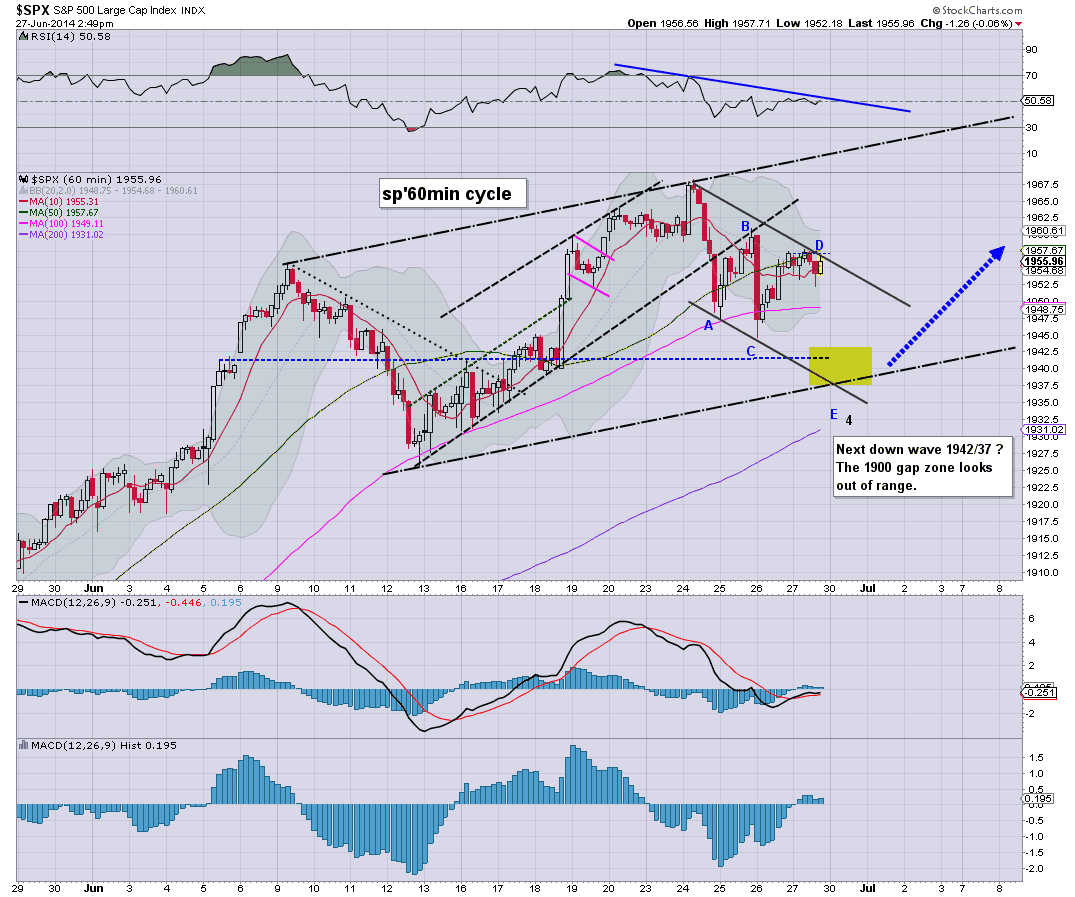 *For details on the R2K rebalancing.. see HERE
--

In the scheme of things, a relatively dull week.

Next week will likely be...more dull.

A 4 day week.. and actually, next Thursday the market closes at 1pm.. so its really only a 3.5 day week.

I will be looking for a touch of minor weakness next Monday, and then melt to the Thursday close..with natural weakness in the VIX.

back at the close...
Posted by Trading Sunset at 19:51:00
Email ThisBlogThis!Share to TwitterShare to FacebookShare to Pinterest

It remains a messy day of not much. US indexes are vulnerable to minor weakness into the close - as supported on the hourly/daily cycles. Primary 'best bear case' downside is a refined sp'1942/37..which seems viable next Monday. VIX is creeping higher in the low 12s. 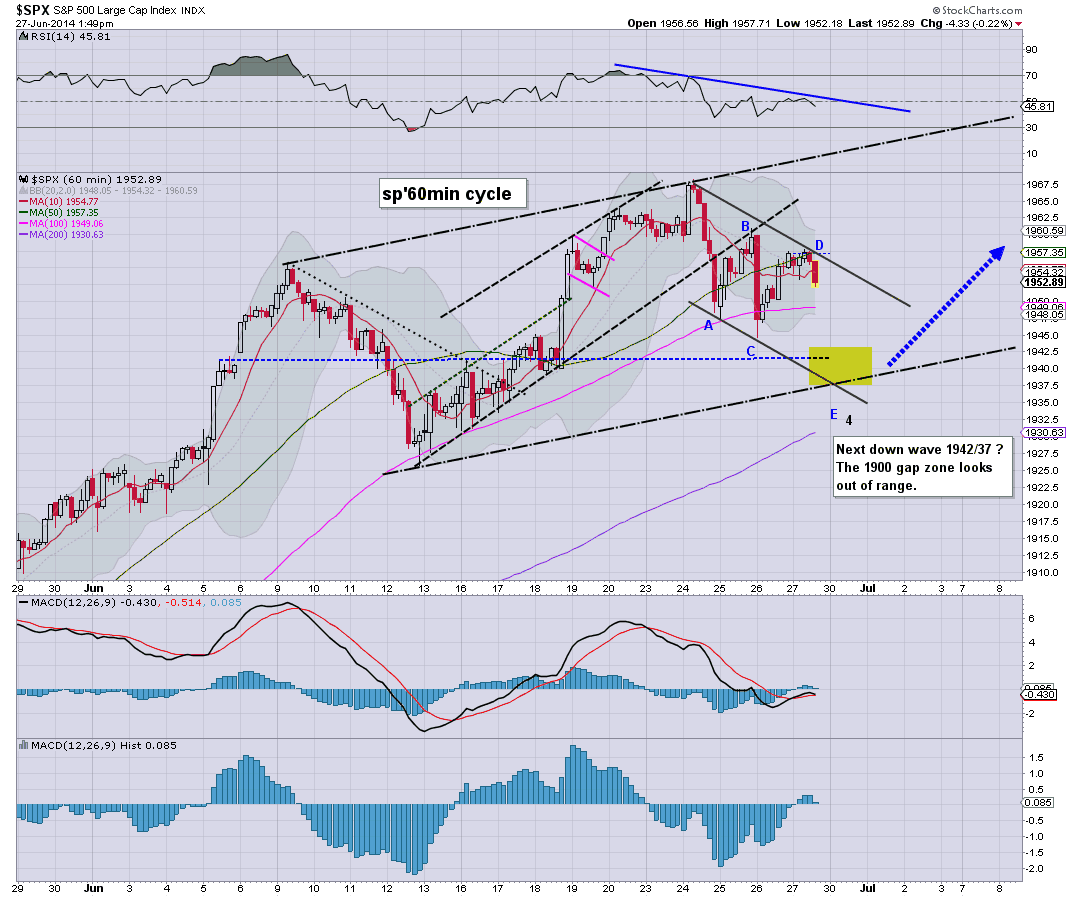 *I've marginally redrawn the down channel on the hourly.

From there, upside into the July'4 weekend..and probably into the week of July 14-18.
Posted by Trading Sunset at 18:50:00
Email ThisBlogThis!Share to TwitterShare to FacebookShare to Pinterest

It remains a day of subdued mild chop in the US equity market. Price structure on the hourly chart remains a rather clear bear flag, with what is a fractionally lower high from late Wed'. There is moderate possibility of latter day weakness. 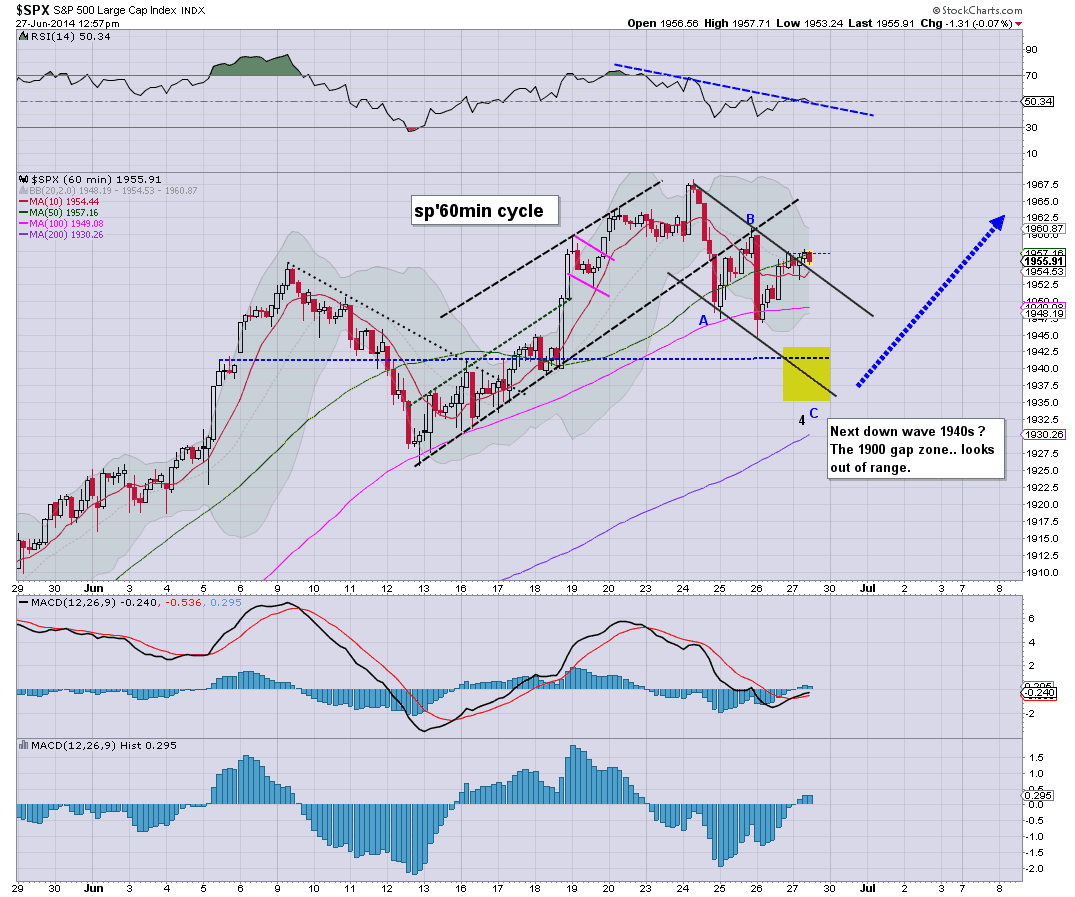 To be clear, even if I was open to picking up another position, I'd not want to trade the short side.

Price structure is a bear flag, but price action doesn't much favour the bears.

--
Regardless... 'moderate' chance of weakness this afternoon, but I sure don't think its worth bothering with... even if we are in the 1940/35 zone on Monday.


1.22pm.. and there goes the morning low. Hourly cycle will be bearish into the close..unless another stupid micro ramp appears out of nowhere.

Could do with the 1940s..just to keep me awake.
Posted by Trading Sunset at 17:58:00
Email ThisBlogThis!Share to TwitterShare to FacebookShare to Pinterest

US indexes continue to see minor chop, and with equity bears failing to show any power, market is in micro melt mode. A weekly close in the sp'1955/60 zone still seems likely, Metals are holding minor gains, Gold +$2. 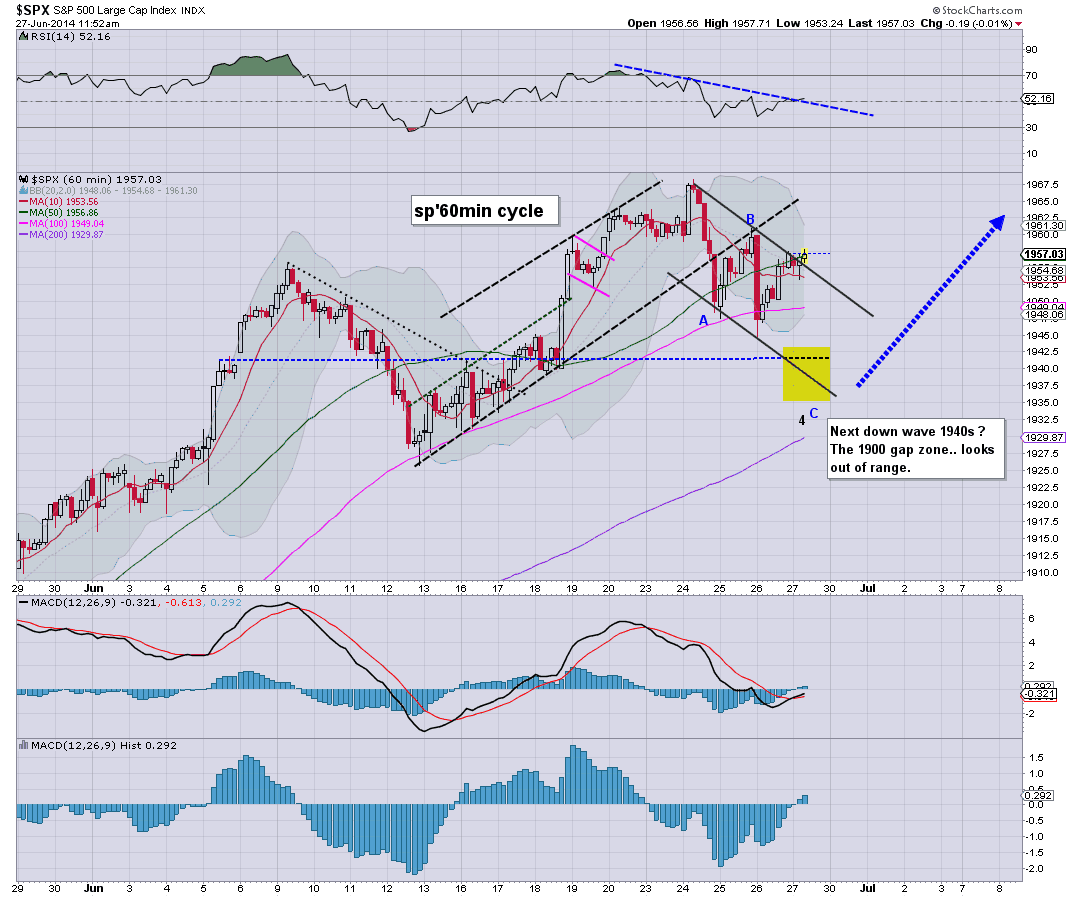 Clearly, the 1940/35 is now off the agenda for today, but the weekly charts would certainly still offer it next Mon/Tuesday.
--

VIX update from Mr P. (I guess Jamie is busy shopping for a new mic).

..with no games today..its kinda empty...

I guess I might see what stocks the clowns on CNBC are trying to pump today.
-
time for lunch
Posted by Trading Sunset at 16:54:00
Email ThisBlogThis!Share to TwitterShare to FacebookShare to Pinterest

The earlier moderate declines have failed even quicker than yesterday. Market appears stuck in the sp'1960/55 zone..and that will likely be the weekly close. Metals are holding slight gains, Gold +$2, whilst Oil is flat. 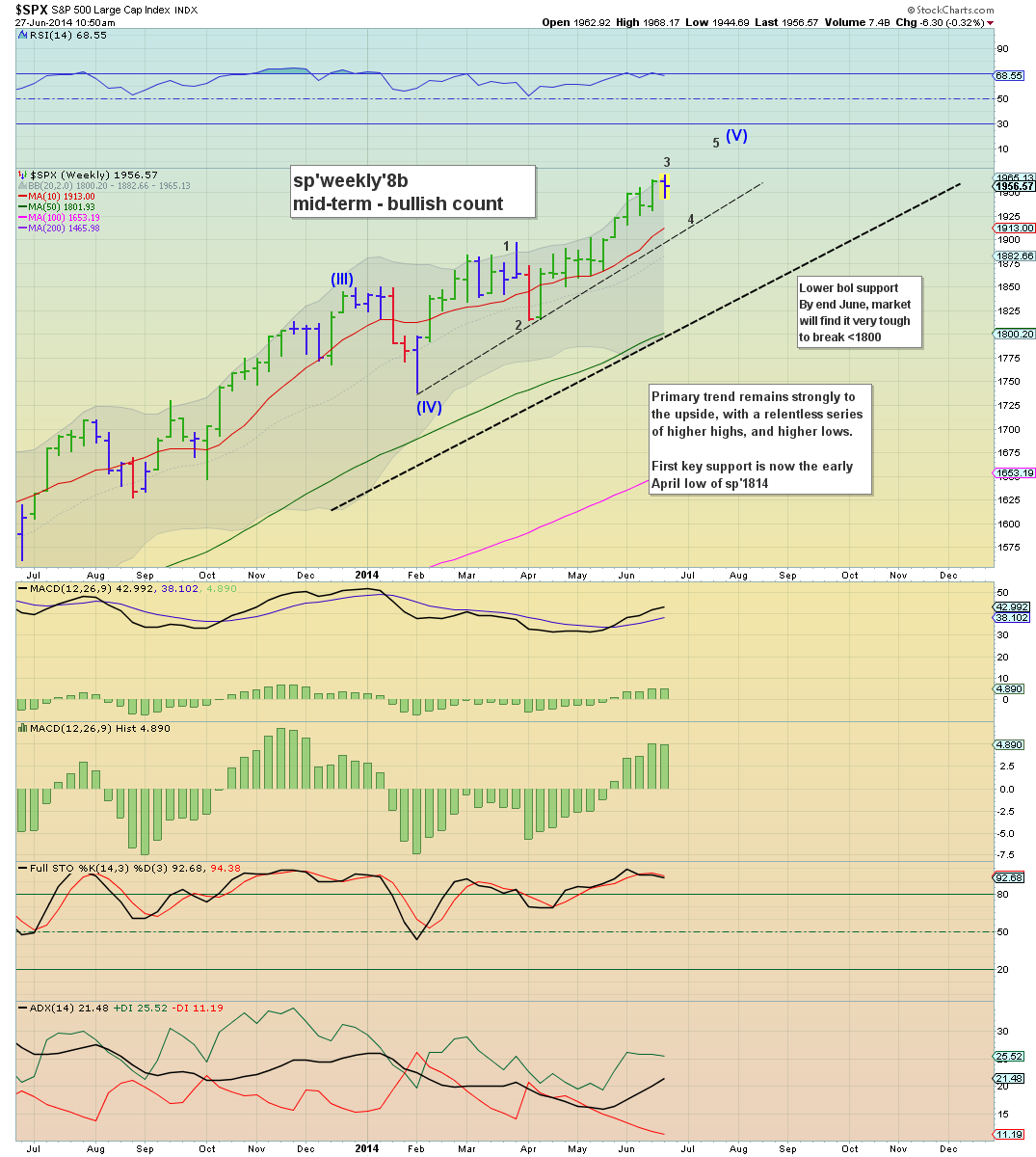 *I'm still looking at the recent action as a sub'4, as seen on the weekly chart.

Now, its entirely possible..if not somewhat likely, we'll see a further minor wave lower early next Mon/Tuesday, before pushing back upward into Thursday July'3 - for the 3 day holiday weekend.
-

Mid July is still lining up to offer a possible intermediate top.

As ever..one day at a time, but for now...I ain't shorting anything for another 3 full weeks.
-

Naturally, WFM is making new multi-week lows..so...that makes for another pointless trading week in my world.
Posted by Trading Sunset at 15:52:00
Email ThisBlogThis!Share to TwitterShare to FacebookShare to Pinterest

US indexes open a little lower, but have already rebounded to flat. Daily charts look somewhat weak, and the hourly charts are still suggestive that the sp'1940/35 zone is viable. Equity bulls can easily sustain a weekly close in the 1940s without doing any sig' damage to the primary trend. 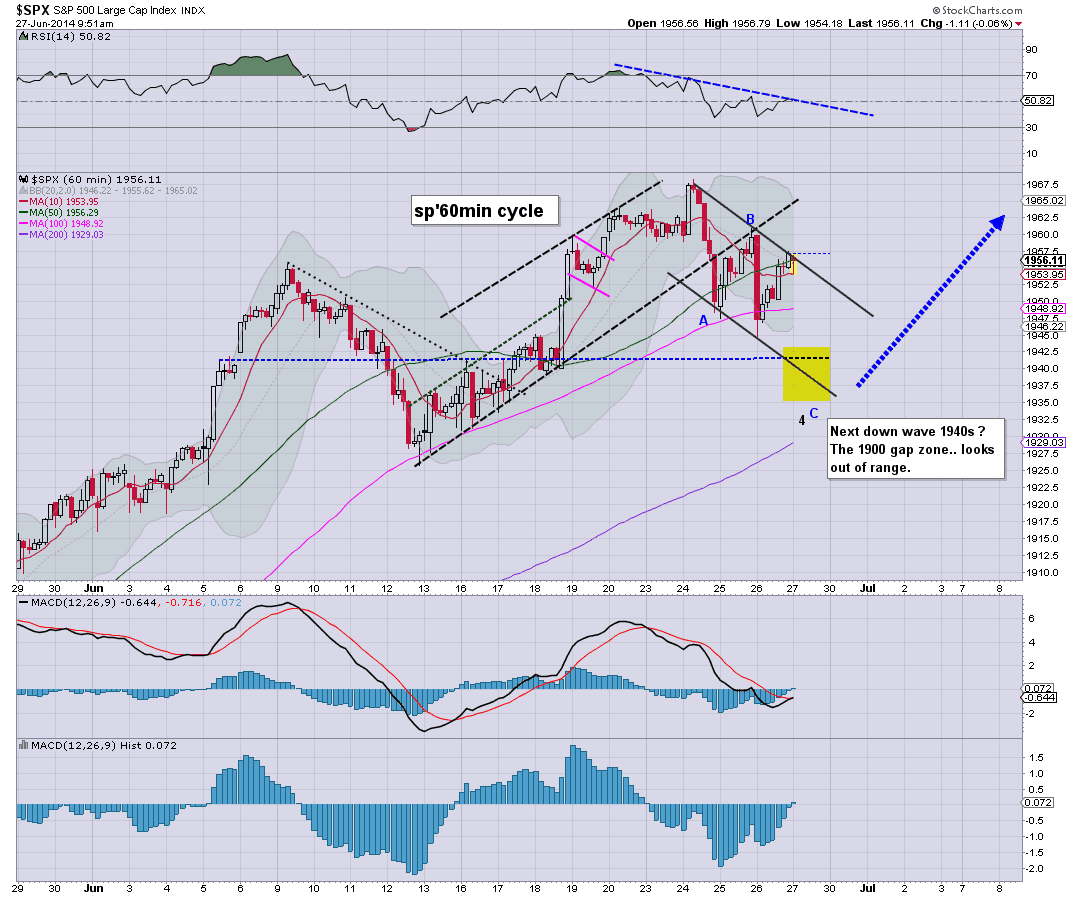 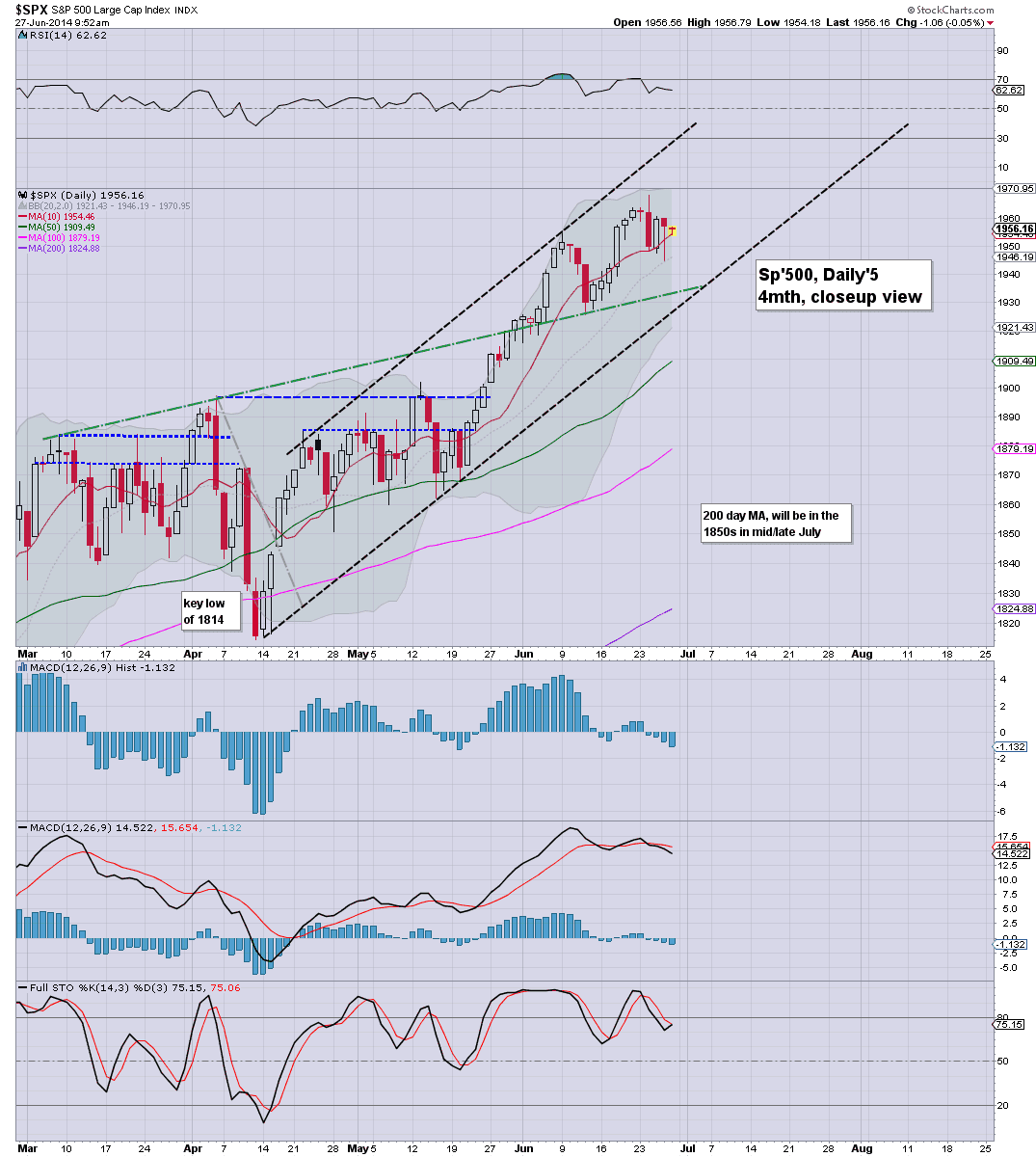 So...is that it for the downside..or another wave?

As it is, I won't try to short this nonsense...the declines remain minor..and never last long.. as we've seen this week.
-

Oh well, I ain't short anyway, none of it matters.

Notable weakness, TWTR -1.6%, but already 1% off the low, and still looks set for much higher levels in July.
Posted by Trading Sunset at 14:54:00
Email ThisBlogThis!Share to TwitterShare to FacebookShare to Pinterest

Good morning. Futures are moderately lower, sp -4pts, we're set to open at 1953. Metals are fractionally weak, Gold -$1. Mr Market looks set for another minor down wave today, there is viable downside to 1940/35. 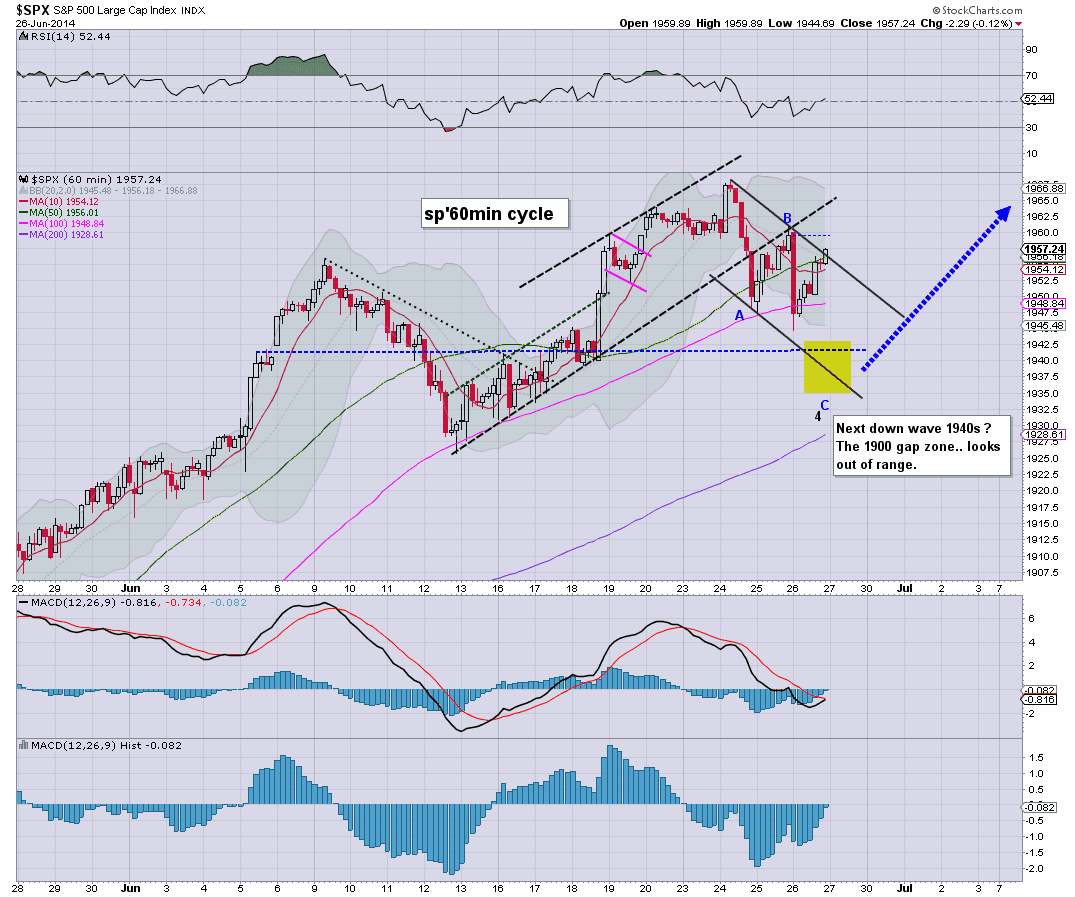 Far more important than the market of course...the world cup...but there are no matches today, the first day in what seems like many weeks :(

The next games are tomorrow, see Schedule @ BBC.

--
Video update from the Permabull


9.03am.. looks like we'll be in the 1940s early this morning....a lower low would make sense...regardless of how you might want to count this nonsense.


9.42am.. looking at the daily index charts, I still think 1940/35 is viable... it'd make for a far better low..and then up.
Posted by Trading Sunset at 13:11:00
Email ThisBlogThis!Share to TwitterShare to FacebookShare to Pinterest

US indexes saw some moderate weakness - much in the style of Tuesday, but it does nothing to dent the current multi-week upward trend. Even the sp'1930s tomorrow.. or early next week, won't do any significant damage to the bullish case, with further upside likely into mid July. 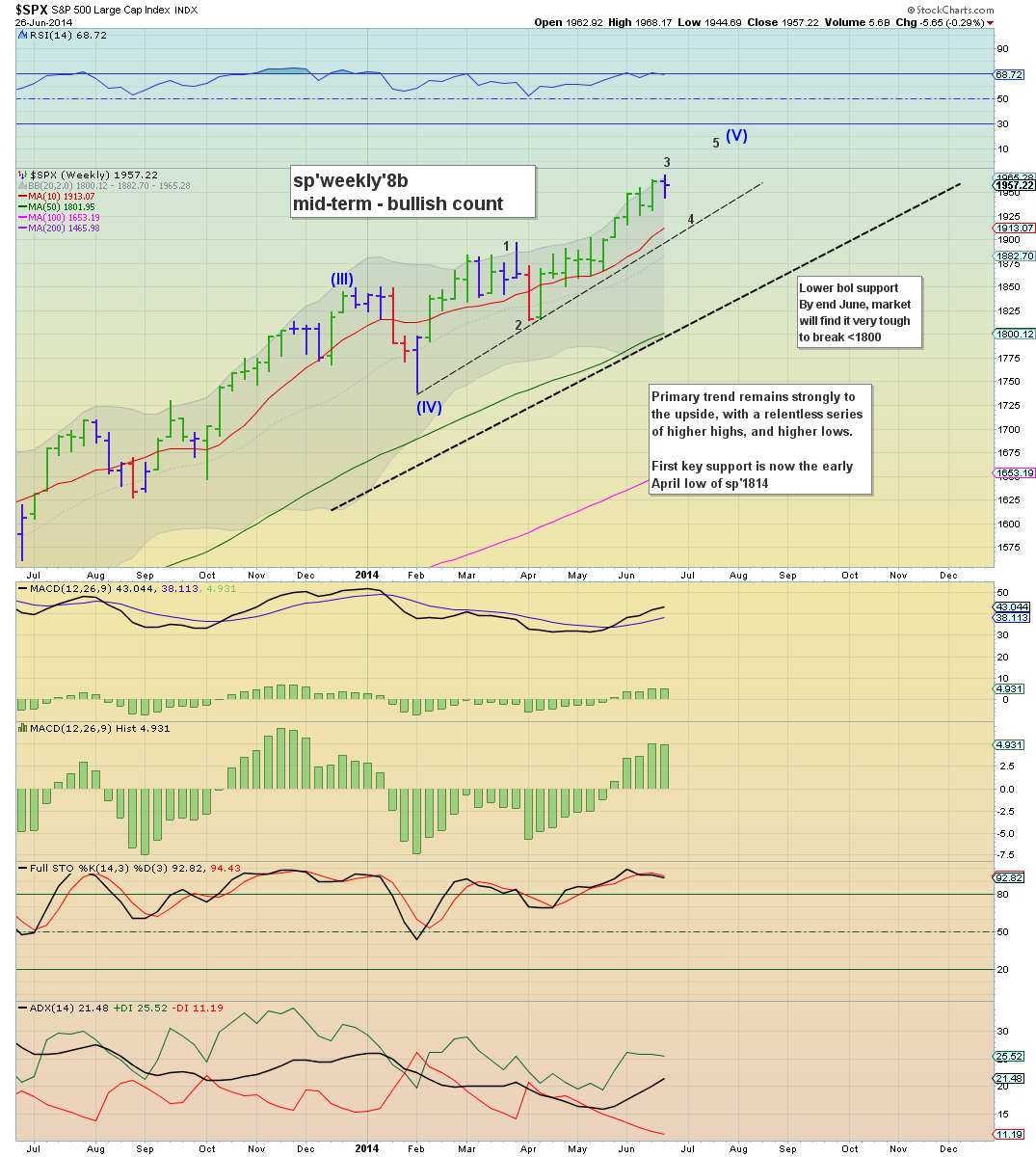 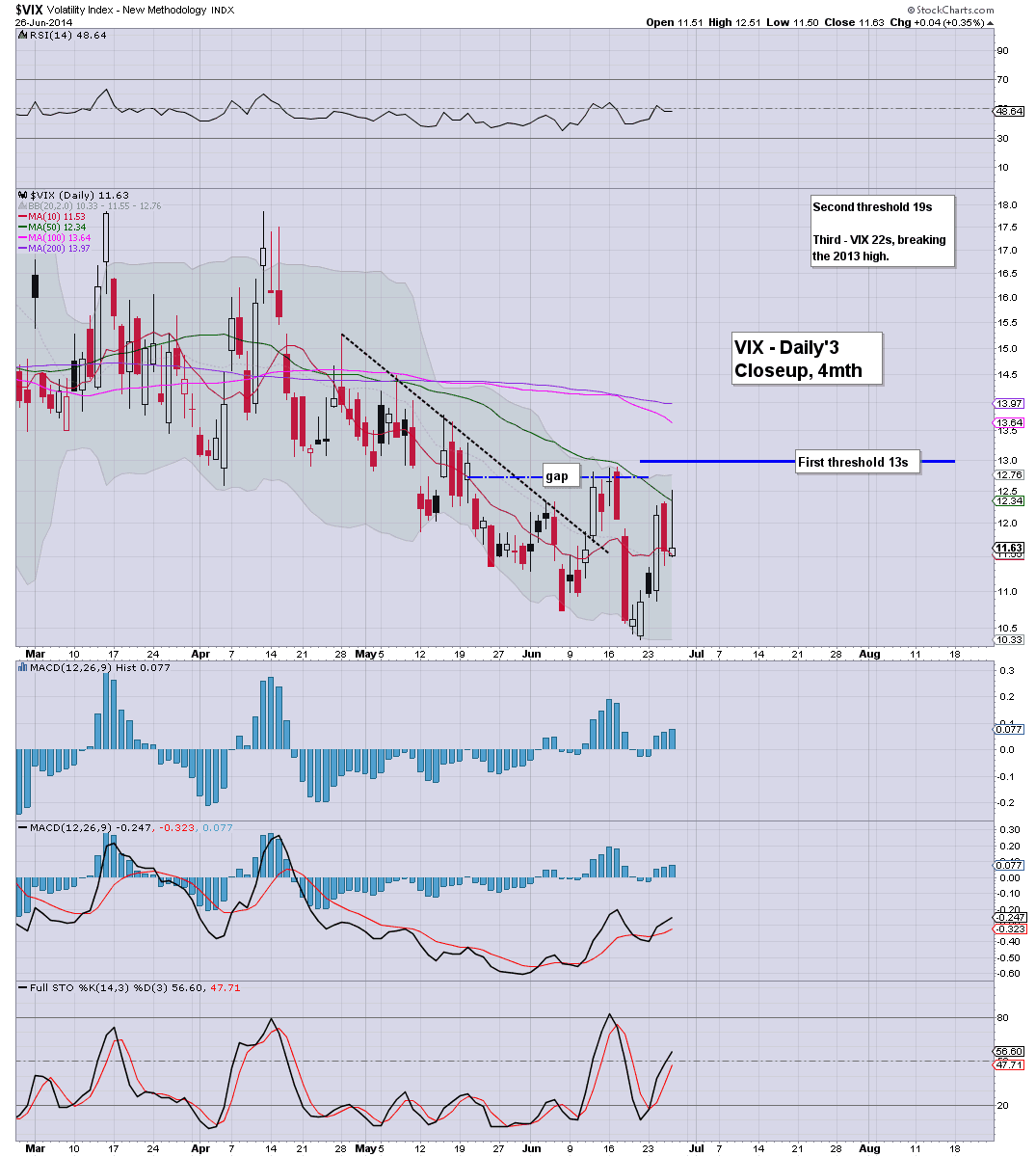 So...minor declines for the indexes, and we have a blue candle on the weekly 'rainbow' chart. As it is, even a weekly closing blue candle will do nothing to dent the primary trend. Early next week, the sp'1935/25 zone would appear to be the very lowest the equity bears could manage, before we resume the upward trend.

Underlying MACD (green bar histogram) cycle is at the upper end of its cycle, and certainly, given another 2-4 weeks, I will be looking for the next multi-week down cycle. As ever though, we might only be looking at a very minor pull back on the order of 4-6%.


The importance of late July

In many ways, the rest of the trading year will be largely dependent on what Q2 GDP comes in at (July'30).... and of course how the market reacts to that.

We are already seeing revised GDP outlooks from some of the big institutions, and in another month, perhaps the market would be content with a number as low as 1% growth - which of course would do little to negate the huge Q1 decline of -2.9%.

Right now, I'm not entirely optimistic - from a bearish perspective. Even a July monthly close <1900 - the first key support, looks to be somewhat difficult.

The only thing of note tomorrow is consumer sentiment data. I suppose if that comes in better than expected it might give the market an excuse to rally into the Friday close..although the sp'1970s look out of range.

There is also the annual re-balancing of the R2K, so expect some high vol' in the late afternoon.

*next sig' QE is not until at least next Tuesday.
-


Stuck in the trenches

Naturally, I'm still focused on WFM, which continues to struggle. Price action remains weak, although at least the daily MACD cycle is offering 'something' positive for next week. 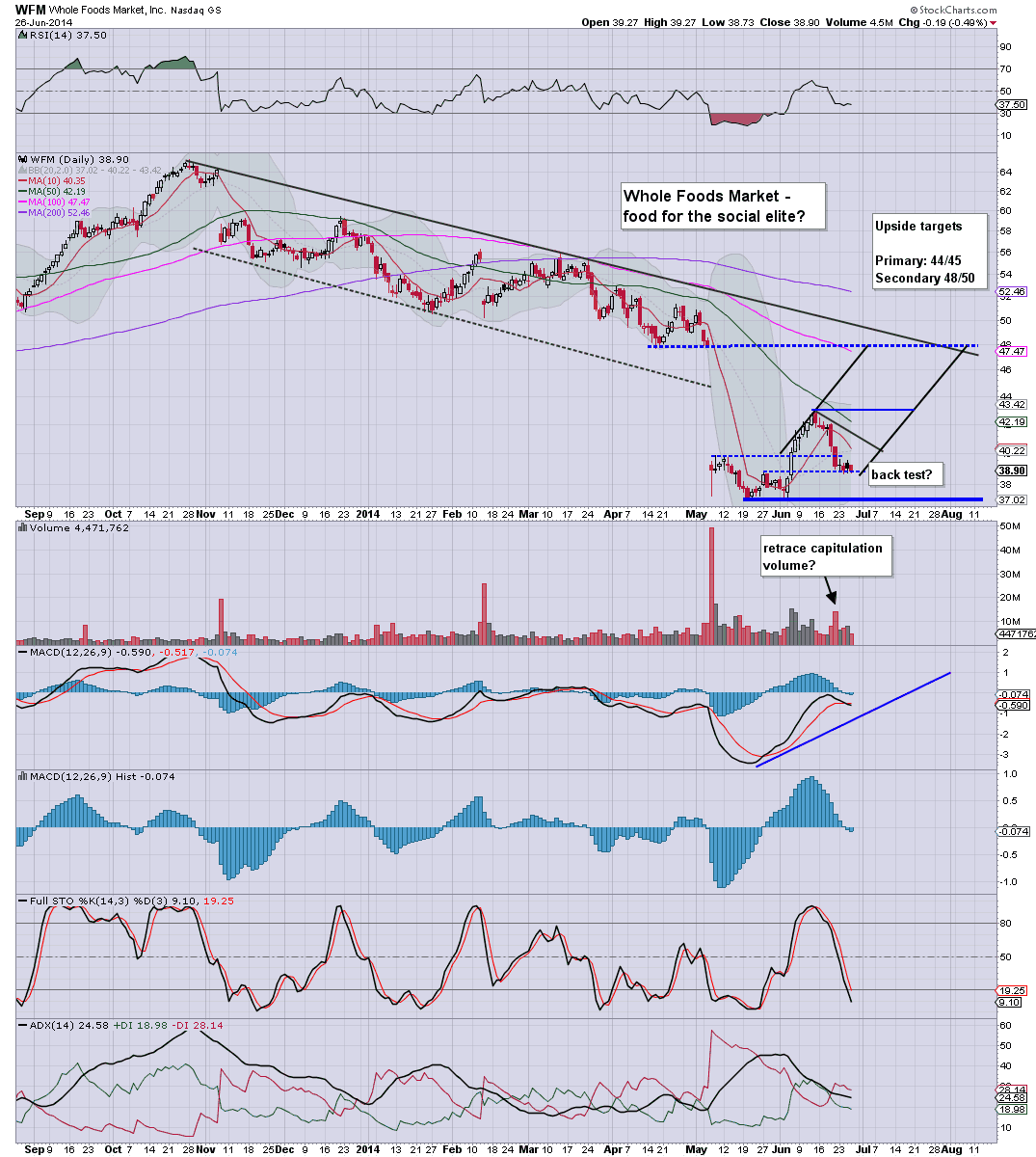 As things are, I'd almost consider picking up an index-long, or even TWTR-long in the immediate term, but...I'm tired.. and until I'm out of WFM, I ain't much interested in adding to my problems.