World equity markets are generally battling higher. Even the PIIGS markets are breaking up and away from the 2008 declining trend. Considering that QE is likely to continue in the months ahead, there is good reason to expect that most indexes will be a further 10-25% higher this summer. 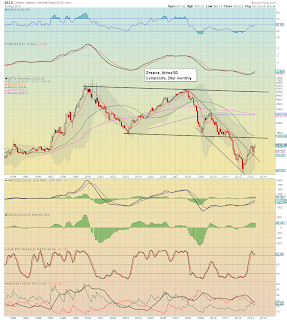 The Greek economy is now beyond 'depression' stage. I suppose you could call it 'third world Europe', but that's probably being overly positive about the conditions there. The Greek people decided to stick with a political leadership that sold itself to the banker elite, and we've now seen the Greek economy already experience what is a system collapse.

The Greek Athex has doubled from its lows of summer 2012, but its still 80% below the highs. Next upside target are the 1300s, which is a good 25% higher. It will be difficult though to break any higher than 1500, even if the other world markets all hold together. 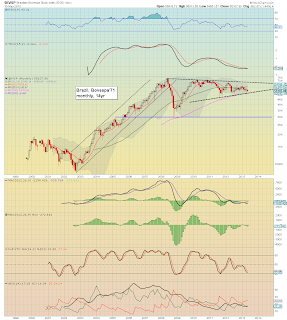 Brazil is failing to ramp like many of the national markets. The Bovespa has been stuck in a somewhat tight range for the last few years. There is a very obvious threshold of 50k, and if that were to fail, it'd open up the 2008 low of 30k. So, its something to watch in the months ahead. 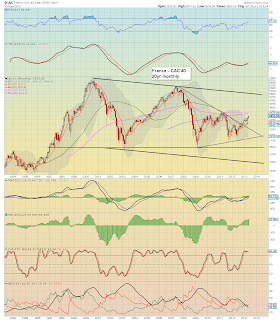 The CAC is in its sixth month above its old declining trend. Next soft resistance is 4000/4250, which is likely to be hit in June. Those seeking further upside across this year should be looking for the big 5000 level, which is a very significant 25% higher. 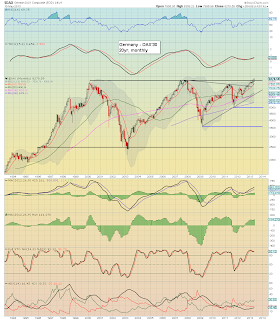 The strongest part of the EU machine is now at all time historic highs. The DAX has broken the double top ceiling of 8100s, and is now on a charge for 9k...but even more importantly, 10k. Underlying momentum is very strong, and is even accelerating.

*I will note for the record, I expect Merkel to get the boot in the early Autumn elections. That in itself has possible massive implications for the EU/Euro, but more on that...nearer the time. 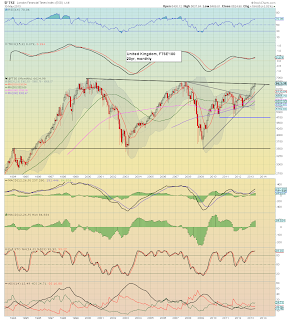 The semi-basket case that is the UK is trying to break trend resistance. The big target is the Dec'1999 high of 6950. That is only 5% higher, and is reachable in June/July. With Carney due to take control of the BoE in July, there will probably be more QE. After all, he has to look as though he is 'doing something productive', right? So, prepare for the UK printers to start spinning up again in mid summer. 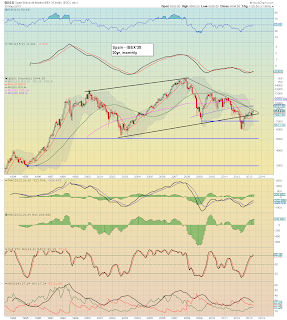 Spain - one of the two biggest PIIGS, is on the same road to ruin as Greece has followed. It remains bizarrely strange how subdued the Spanish people are. After all, there is mass unemployment, and there is zero hope of things getting better for many years. Perhaps the more interesting issue is of Spain itself splintering, with the northern province of Catalonia still looking to breakaway from their southern 'lazy Madridites'.

The IBEX itself is at declining resistance. A monthly close in the 9000s would be enough to confirm another market breaking out of the 2008 down trend. First target would then be the big psy' 10k level, and then the 2009 surge high of 12k.

Considering the underlying economy, 12k does not look viable, no matter how much the ECB tries to paper over the cracks. 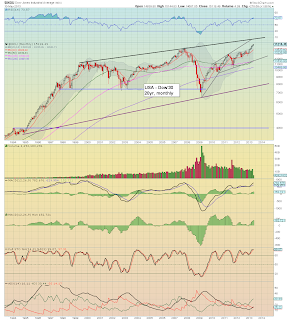 The US market is one, if not, the world leader, and the Dow is indeed in historic territory.. A simple line linking the two tops of 2000 and 2007, would suggest the next soft resistance will be somewhere around 16k/16500. That seems viable by July/August.

Underlying momentum remains strongly to the upside, and there is absolutely nothing bearish here. Trading volume continues to decline, but that's been the case for almost four years. 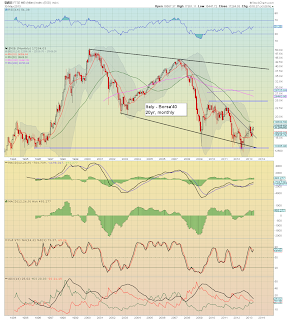 Italy - as the second biggest of the PIIGS, is making another attempt to decisively clear the old declining resistance. It will be important for the Borsa to put in a monthly close in the 18000s. That is only 5% higher, and seems likely this summer. 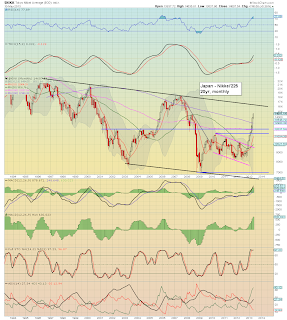 Destruction of a currency leads to at least one thing....rising equity prices! With the JCB deciding to kill the Yen, the Nikkei has soared from the lowly 8000s to 14600 in less than a year. Next target is a very obvious 16k, which is a mere 10% away. That seems extremely likely within the next 2 or 3 months.

No doubt the JCB is very pleased with itself, yet this policy of destroying the domestic currency is a one time trick. As many recognise, Japan will probably be the first modern nation to experience a complete system failure. Maybe China will 'come visit' and mop up the pieces in the 2020s? 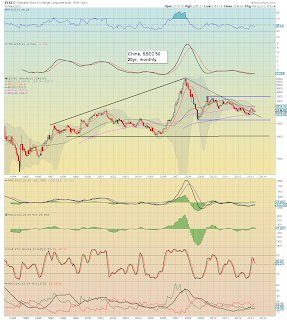 The China market is still kinda struggling, but it has broken out of the major down trend. It even has has a baby bull flag on the monthly chart, a move above 2500 will confirm it. First big target is the 2009 surge high of 3500, but that's a massive 60% higher!

I find it hard to imagine how even the 'cook the books' Chinese leadership are going to kick the market up that amount, even if they are given 2 or 3 years.

We certainly have some indexes moving in historic territory, with the old 2000/2007 ceilings broken through. Yet, many of the weaker nations - not least the PIIGS, are still badly lagging.

QE looks set to continue in the USA, UK, wider EU, and of course, in Japan. For the moment, asset prices are more likely to continue their current trend than start to decline.


US Trend remains to the upside

I wanted to again highlight this. Last weeks 'equity bear failure' was critical, and we've now seen the Transports put in a very clear green bullish confirmation candle on the weekly chart. 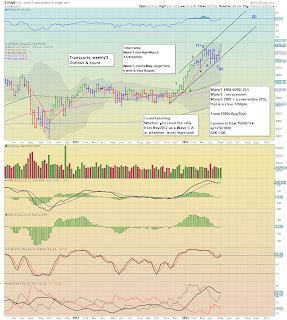 There is literally nothing bearish here, and as noted on the chart, Trans in the 7000s seems likely, which would equate to sp'1800s. Those levels seem viable as early as late July/August.

This coming week will be a lot more active, and those algo-bots will have less control/opportunity to melt everything higher. There is econ-data every day, starting with the April retail sales data. The market is expecting a marginal decline of -0.3%, so anything positive will be an excuse to rally.

There is no QE on Monday, but there are big POMOs on Tuesday and Friday, the latter of which also happens to be opex.

Frankly, I can't stomach going long the indexes, but I can cope with going long via Oil. That worked out well on Friday, and I currently seek to go long again sometime on Monday. 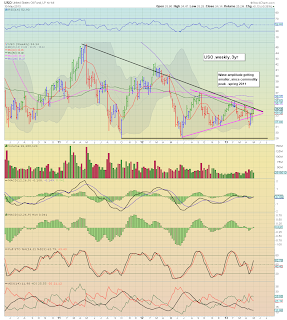 Yes, Oil (and Copper) are still looking vulnerable on the bigger charts, but the immediate pressure is to the upside. Commodity bulls should be seeking a weekly/monthly close in USO >35. If that can be done this May, it opens up the low 40s for July/August - which equate to WTIC Oil in the 110/120s.

Higher gasoline prices, that's going to really be a boost for the US consumer based economy, right? ;)

back on Monday
Posted by Trading Sunset at 18:23:00
Email ThisBlogThis!Share to TwitterShare to FacebookShare to Pinterest

The main indexes all melted moderately higher into the weekend, with the R2K leading with gains of 0.9%. There are possible baby bull flags on a number of indexes, and there is an easy 1% upside across next Mon/Tuesday. For the bears, this is no market to be shorting. 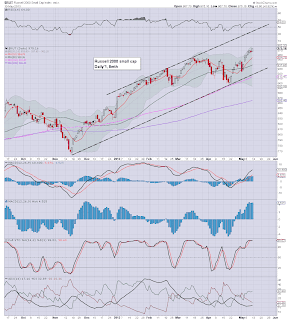 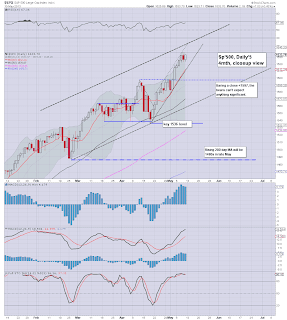 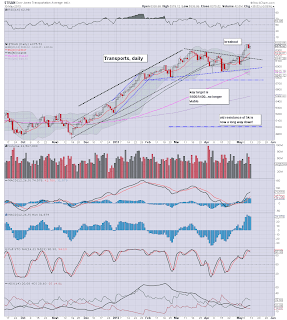 As I expected last weekend, with no significant news, the algo-bots had almost total free reign/control of this low volume market. Essentially, five days of algo-bot melt to the upside.

*I closed out a USO (Oil long) position in the afternoon after a surprising little hyper-ramp, and will seek to go long again next week.

There is at least a 'little news', so price action will be at least a bit more active/volatile, not least since it is opex.