The main indexes bounced 4% higher in a short 3.5 day trading week. That is pretty impressive, but also understandable after the initial decline from sp'1474 to 1343. The bears need to restrict this wave'2 bounce to no higher than the 1420/30s in the coming week.

Lets take a look at those weekly index charts... 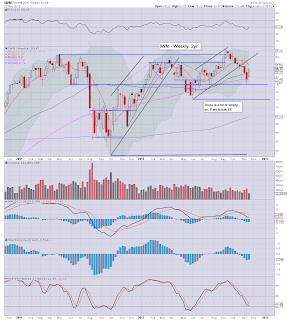 The Rus'2000 (R2K) index confirmed the floor-spike in the previous week, with gains of 4%. The first level of soft resistance is 81/82, where the 10MA is lurking. It will be very difficult to get above 83. Underlying MACD cycle remains in negative territory, but its now starting to tick higher. 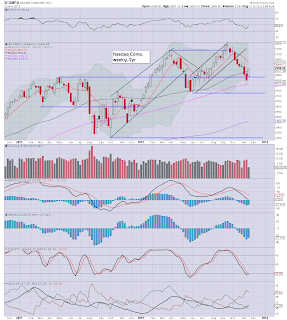 The powerful tech' sector has seemingly found support at the 100 week MA. This weeks 4% gain confirmed the floor-spike, and we're fighting back higher. However, it will be difficult to break above 3000, which is a little over 1% higher.

In terms of the MACD cycle, we're certainly pretty low, so this bounce is very understandable. 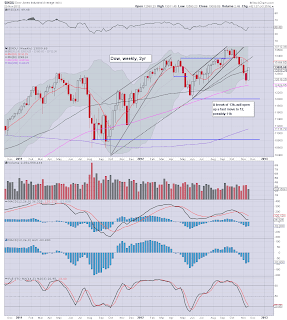 The big Dow'30 managed to claw its way back to close the week over 13k. This is probably the bulls biggest achievement, and the Dow is now set to test the declining 10 MA - which at the Monday open, will probably be around 150pts higher. 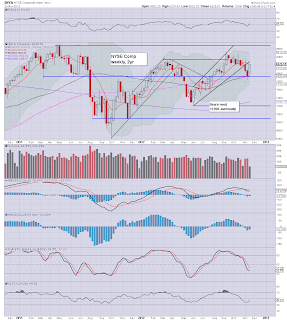 With the near 4% bounce, the master index - having not declined as much as the other indexes in recent weeks, is now already back above the 10 MA.

From a MACD cycle perspective, the NYSE Comp' could even flip to a positive cycle in early December. For the bulls, this is one of the most bullish charts out there. 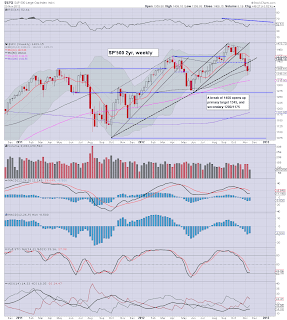 We're now 66pts higher than the low from last Friday. That is certainly a very impressive bounce, and the style in which we closed the week was certainly bullish for early next week.

There is significant resistance, and key Fib' retracement levels around sp'1410/25.

It will be severely difficult for the sp' to put in any closes in the 1430s. Lets be clear, if we do somehow close in the 1440s, it will probably mean the old 'market madness' is back, and we'll break to new index highs.

A break of the 1343 low, would confirm that this bounce was indeed a wave'2, and everything before that was a wave'1. By default, a wave'3 as such should at least test the June 1266 low, if not take it out - as the monthly charts (which are still rolling over) suggest. 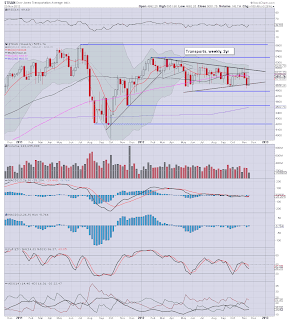 The tranny remains trapped in the twilight zone. We are still waiting for a clear break, whether its down to 4500, or over 5400. It can't stay in the current range forever.

So, last Fridays spiky low - which started with that 11am mini hyper-ramp (remember that?), was confirmed with this weeks 4% gain. Partly, it was enhanced due to the 'holiday reversal' issue, which many have recognised, and certainly, I was very concerned about it, and hence why I sat the entire week out.

The 4% bounce is certainly the kind of thing that has again sent some of the bears into despair, and also some of the permabulls into a new bout of mild hysteria.

I remain holding to all original targets that I set at the end of October. I'm seeking a wave'2 bounce, that will max out somewhere around sp'1410/25. The difficult issue is how long do we churn sideways before the next wave lower. 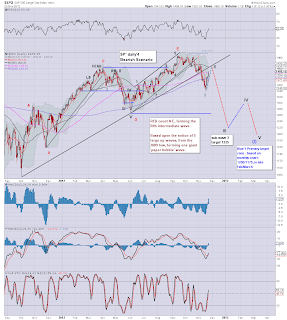 I am uncertain of the time issue. The seasonal 'Santa rally' factor may delay the next wave'3 decline until January, but we have the massive issue of the fiscal cliff, and the underlying econ-data which is generally suggesting the threat of a US recession.

So, I will hold to the original outlook, but as ever, be mindful that even if we are going to get a major move lower into the low 1200s, that Santa may delay it until January. 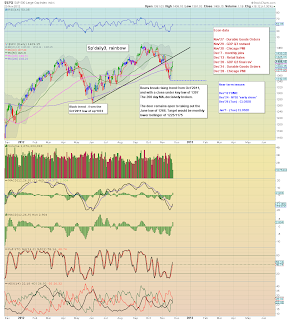 We have just five trading weeks left of the year, I'm sure they will be pretty busy, and hopefully at least reasonably entertaining. I will return on Monday.

Good wishes from a rainy London city.
Posted by Trading Sunset at 18:00:00
Email ThisBlogThis!Share to TwitterShare to FacebookShare to Pinterest

Right on Schedule for sp'1200s

The Sp'500 climbed almost a full fifty points in this shortened 3.5 day trading week. That is very impressive, and doubtless the bulls are now looking forward to a year end rally. However, I am pretty confident that the only presents Santa is bringing this Christmas for Mr Market, will be sticks of lit dynamite. 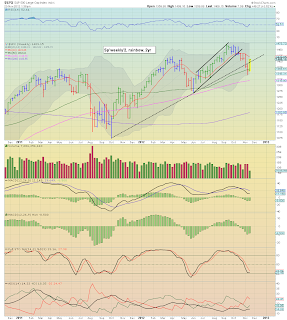 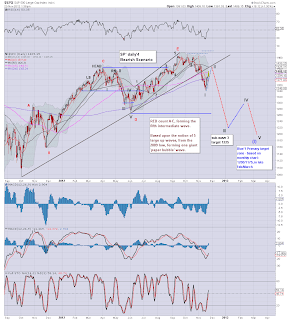 I find it very amusing that the last hour ramp achieved what I was seeking most of all this week - a green candle, on the weekly rainbow chart.

Yes, we have a VERY strong green candle, and its very much in the style I was looking for. As I have referred to a number of times, look back to the price action in late June 2011.

So we've likely seen the majority of the gains in this bounce, with maybe just another 1-1.5% left to go..and then some choppy churn*, and then we go down like a rock, with a target of sp'1225.

It is an issue I do want to note, since it is possible seasonal factors will delay the next decline. Yet, I think that maybe over-thinking things. The sp'daily4 outlook has been right so far, I am trying not to start double-thinking my original outlook.
--

Regardless of my own trading account, and the implications such a fall into the low sp'1200s might mean, I am absolutely fascinated to find out whether this fully plays out as I had originally foreseen.

The main indexes climbed on nothing less than algo-bot low volume melt, and this concluded what was a classic holiday reversal week. The sp' closed less than 1pt away from the base of my re-short target zone of 1410/25. 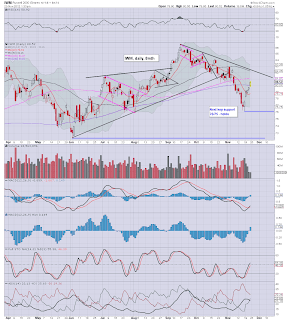 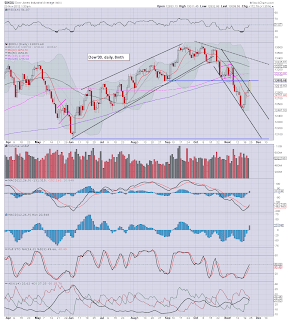 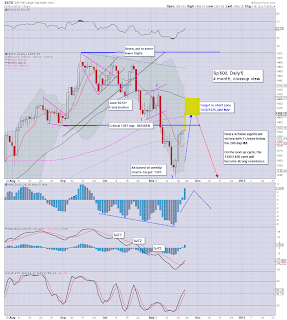 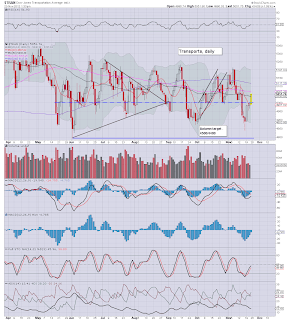 A pretty stupid day it has to be said, in market land. Very light volume, and so the algo-bots were left to it, and merely did their usual nonsense.

From a MACD (blue bar histogram) perspective, we're now storming higher on the SP, Dow, R2k, but we're not even + cycle on the transports. There is a very likely 2-4 days higher yet to come.

Suffice to say, I am glad I decided to sit this week out.  I'll be back hitting buttons next week.

Best guess remains, we'll max out next Thursday, look for a reversal/spiky candle at that time.