The US equity indexes generally saw moderate declines of around 0.8-1.4%. The two exceptions were the Nasdaq and R2K, which both saw fractional gains. The broader mid-term trend remains clearly to the upside. 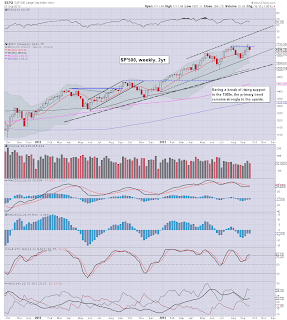 Baring a few daily closes in the 1670s..or lower, equity bears face the broader mid-term trend, which remains starkly to the upside. However you choose to count the waves from the key Oct'2011 low, the trend sure isn't down. Again ,its notable that in the two more recent pull backs, neither hit the lower weekly bollinger. This remains a very strong market.

In terms of upside, the 1800s are viable as early as late October, but far more likely in Nov/Dec. A yearly close in the 1900s is not impossible, but will be difficult - not least if there is another sporadic pull back of 5-7% - which does seem likely before the year concludes. 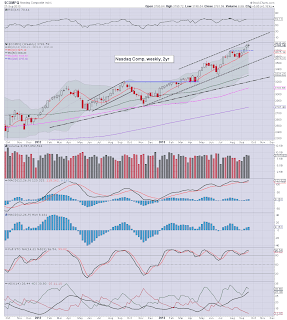 The Nasdaq actually managed fractional gains of 0.2% this week (hey bears, are you listening?). The 3800s look likely within the next week or two..and the big 4000 level remains an obvious psy' level target before the year concludes. 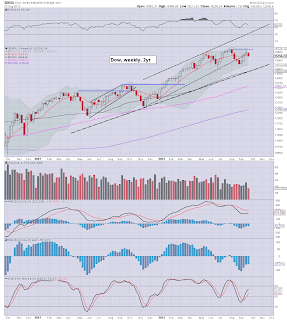 For those bears who are seeking major declines this autumn, the big support/trend to break - as of October, will be in the 14500s. That seems difficult to achieve. On the flip side, first upside target are the 15700s, and then the big 16k level. 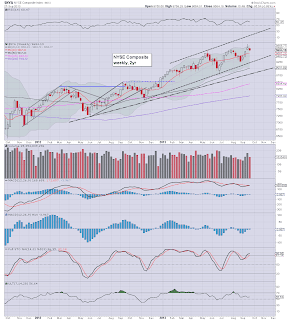 The master index slipped 0.9%, if the main market can resume upward in October, the big 10k is the obvious target. 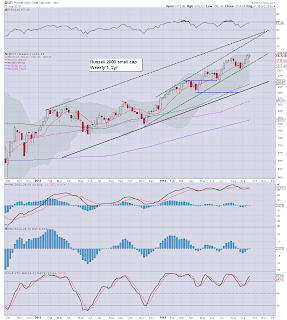 Despite general weakness in the market, the R2K closed fractionally higher. The R2K remains in its accelerated up trend - since last November. Upside target for Q4 is 1150/1200, which seems viable. 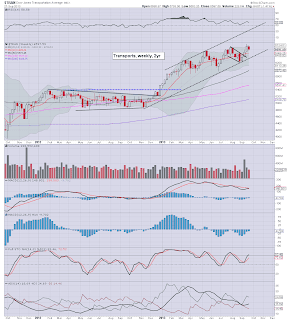 The old leader was especially weak, slipping 1.4%, but is comfortably above the 10MA, and the 7000s really aren't that far away. Despite the declines, underlying MACD cycle ticked higher, although there is no bullish cross yet.

So..a week where the market saw moderate declines, although certainly it is important to note the fractional gains in both the Nasdaq and the R2K.

Primary trend remains bullish (at least for a while)

Despite a moderate decline of just over 1%, the sp' closed the week with a green candle on the 'rainbow' chart. There really isn't anything bearish here. 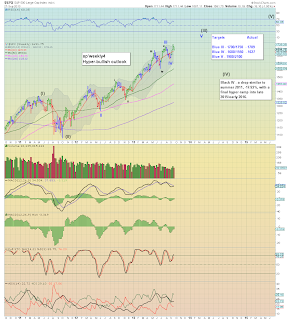 My best guess is that we still have a major wave higher to play out before ANY chance of 'significant' downside. Considering the usual 'santa rally', and then the 'green shoots of spring' rally...this wave could just keep on pushing higher for another six months.

Things are a little uncertain, due to the possible US Govt. (limited/temporary) shutdown. From what I gather, any US (Govt' based) econ-data releases - including the big Friday jobs data, would likely be delayed..

*there is no sig' QE on Monday, the POMO schedule for October will be released Mon'3pm.
--

*I remain long the indexes from a week ago, am underwater, but considering the price action of the last week, I'm not overly concerned.

I will probably be back on Monday
Posted by Trading Sunset at 17:26:00
Email ThisBlogThis!Share to TwitterShare to FacebookShare to Pinterest

Moderate weekly declines for the bears

US equities closed the week on a moderately bearish note, with the sp' managing to hold the 1690s. Across the week, the sp' declined around -1.1%, which is clearly nothing for the doomer bears to get overly excited about. Broader mid-term trend remains outright bullish. 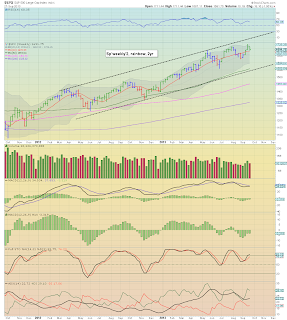 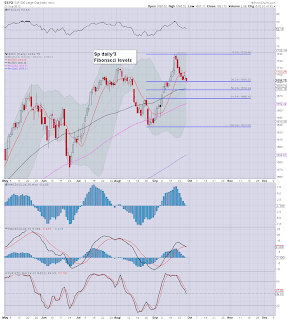 Clearly, a week for the bears, although the declines aren't significant, and this could easily just be a very minor retrace, before the next wave higher.

So, at worse, bulls look vulnerable to a further 1% lower, before renewed upside in October. Considering the style of price action this past week, i just can't see the bears managing any daily closes in the 1670s, never mind taking out the recent key low of 1627.

For the moment, the mid-term trend remains outright bullish. For those who are seeking much lower levels, first target should be a break below the weekly 10MA...into the mid 1670s.

If the market can close in the 1670s next Friday, then I'll be open to a much more bearish outlook this autumn, but really, I find that hard to believe considering the ongoing QE.

Goodnight from London
--
*next main post, late Saturday, which will be covering - in more detail, the US weekly indexes.
Posted by Trading Sunset at 04:00:00
Email ThisBlogThis!Share to TwitterShare to FacebookShare to Pinterest

The main indexes closed moderately weak, with the sp -7pts @ 1691. The two leaders - Trans/R2K, slipped -0.6% and -0.4% respectively. Near term remains weak, but the recent seven trading days could easily be a bull flag, with target upside in October to the 1750/75 zone. 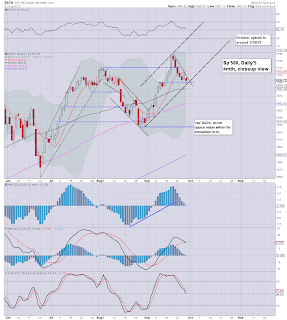 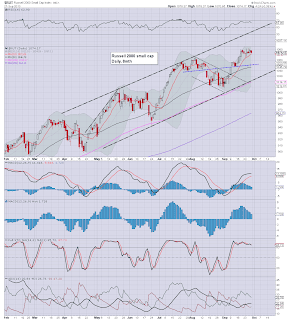 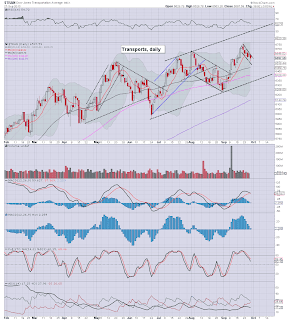 The market closed the week in a relatively quiet state, despite a closing hour appearance by the US President. The market is obviously looking for a resolution to the potential Govt. shutdown.

The primary trends remain to the upside, and based on the past few years of trading action, I have to assume the market will simply break back upward to the upside some time next week.

That is simply not good enough, and once the bulls do manage to turn the market back upward, they'll be more than capable of breaking new index highs.
--

a little more later..to wrap up the week
Posted by Trading Sunset at 01:00:00
Email ThisBlogThis!Share to TwitterShare to FacebookShare to Pinterest
Newer Posts Older Posts Home
Subscribe to: Posts (Atom)