After some weakness earlier in the week, the US indexes are back to outright bullish. Even the Trans/R2K, which closed April slightly lower, are pushing higher. It would appear we will now rally into the summer. The bears arguably need to go back into their caves for another 3-4 months.


Lets take our regular look at the six main US indexes... 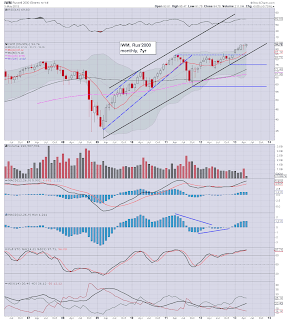 The second market leader - along with Trans, closed April a touch lower, but its right back on track now. The big R2K @ 1000 level is now the obvious target, and then 1100s by late July/August. Baring a break under IWM 90, there is nothing bearish here. 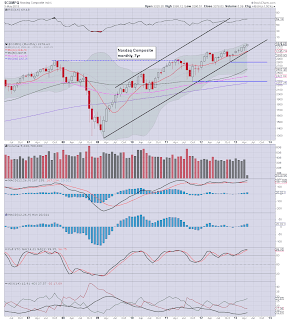 The Nasdaq is already up 1.5% for May, after just 3 trading days. There is nothing bearish here, and the only issue is whether we will see 4k before this post-Oct'2011 wave is complete. The fact that AAPL looks floored on a monthly chart (target is the 200 day MA in the $540s) is also super bullish for the broader tech sector. The mighty Dow hit 15009 on Friday, a new historic high, and this especially saw the cheer leading maniacs on clown finance TV to almost explode with glee. There is literally no ceiling, and a summer run to 16500/17000 now looks pretty reasonable. 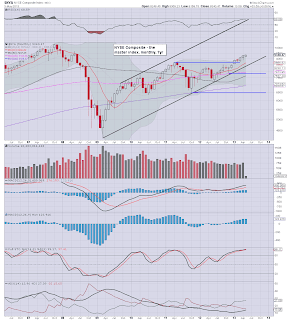 The master index is still significantly below the Oct'2007 highs, but its possible we'll see a challenge of 10,387, in the late summer. Nothing bearish here. 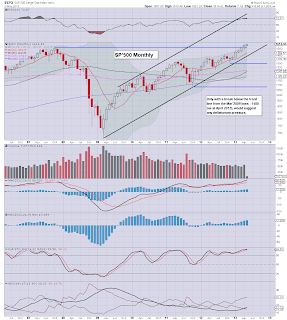 *an incredible fact is that the SP' is now up for 16 of the last 20 months. Of those 4 declines, only 1 ranked as more than 'marginally' lower. 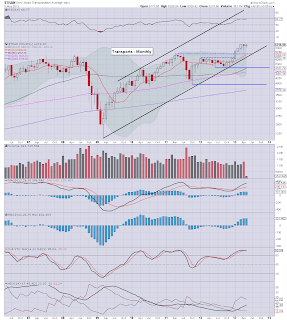 The old leader closed April (along with the R2K) slightly lower, but that small decline has already been largely negated. The Trans now look set for a major wave higher. The 7000s are the next big psy' level.

Baring a break back under 5750, there is simply nothing bearish here anymore. The original hope of a retracement back to the breakout level of 5500/5400, is now thrown out.

It was a tough week for many in market land. We saw the two leaders -Trans/R2K actually close April (Tuesday) a touch lower, suggesting weakness. Wednesday saw very sharp declines of -2.3% for the Trans/R2K, with the headline indexes -1%.

Yet.. Thursday saw a major rebound, with Friday showing what I believe is a clear breakout.

I certainly feel like I've just been spun in a washing machine @ 1200 rpm for the past week. From concerns of a new bullish move, then bearish, and now back to bullish. Its tiring, and for many, its starting to become pretty dispiriting.


Using the transports as a guide

So, having said that, I'm going to look to the old leader as the guide. Trans closed the week with a blue candle on the rainbow chart. Although I should note it was actually green for most of Friday before some of the gains eroded into the close. 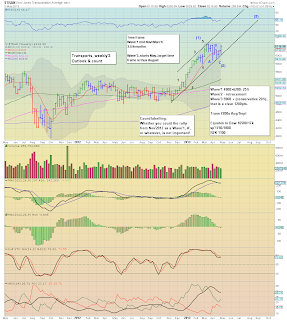 Clearly, the initial breakout was last November. The rainbow chart actually helps to count the smaller waves a little easier in my view. 5 little waves higher, then the recent choppy pullback, and now...UP.

I realise this outlook/count is a bold one - not least coming from yours truly, but hell, its the best I can come up with right now. Everything I saw on Thursday and Friday again reminded me of the sheer underlying strength in this market.

*if you follow Oscar Carboni (see previous post for video), you'll also be aware of his Trans 7000s target - which he noted some months ago. It does look viable this summer.


Bigger picture outlook for the SP'500

Consider the following, and keep in mind the outlook from the Transports listed just above. 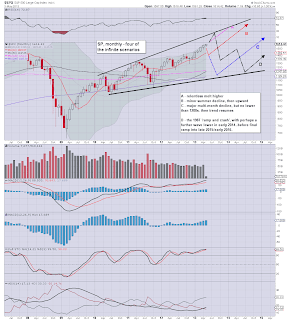 Right now, best guess is now scenario D. I should probably remove the word 'crash' from the notes, but perhaps we're looking at a decline from the sp'1800s to 1400/1300 in the autumn? It was actually one of the main scenarios Marc Faber (Dr Doom) threw out there in January.

The D scenario would be pretty amazing to trade. However, unless the Fed are not doing QE in 2014, you'd have to assume the market will just rally right back, with a further very strong wave across 2015/early 2016.

There is virtually nothing of note in the week ahead. On that basis, with nothing to upset the market, you'd have to assume the algo-bots will be given free reign for the entire week. All else being unchanged, the bots will probably be melting the market into the sp'1630/40s by the end of the week.

I realise my outlook has changed dramatically these past few days, but I'm just calling it the very best that I can. I perceive the market to have broken out, that's how I'm going to trade it, and that's what I will state here in the weeks ahead...unless it changes.

back on Monday
Posted by Trading Sunset at 18:22:00
Email ThisBlogThis!Share to TwitterShare to FacebookShare to Pinterest

With the jobs data coming in better than the mainstream expected, the US market rallied into the weekend with gains of around 1% for the Dow, SP, and Nasdaq, and 1.5% for the Trans/R2K. Today was a very clear bullish breakout after earlier weakness in the week. 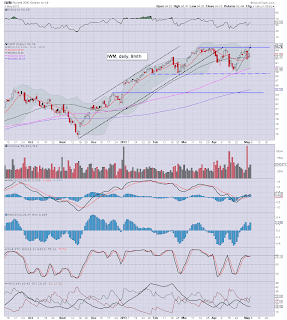 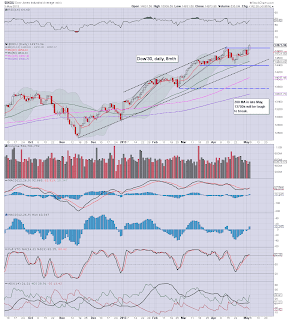 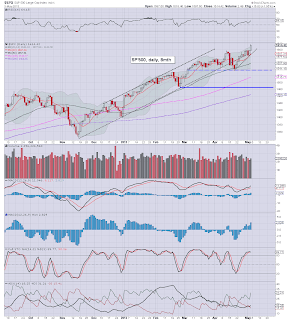 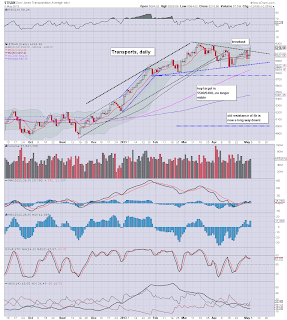 The bears can detail the underlying status of the US employment picture all they like, but it doesn't matter. The market simply does NOT care about the macro-economic picture right now.

The Fed is doing just enough QE to placate the market, and we're now back to cruising steadily higher. So long as the trading volume remains low, the algo-bots are going to be able to melt this market higher across the next 3-4 months.

I am now dismissing all those hopes of downside across May.
--

That's all for today, and the week.

Have a good weekend.
--
*next main post, late Saturday, which will probably be on the US monthly index charts.

--
Bonus video to end the week, from Oscar Carboni...

..just something to think about, especially for Gold/Silver.
Posted by Trading Sunset at 01:00:00
Email ThisBlogThis!Share to TwitterShare to FacebookShare to Pinterest
Newer Posts Older Posts Home
Subscribe to: Posts (Atom)