With US equities closing significantly lower, the VIX opened higher, and held gains into the weekend, settling +9.3% @ 20.70. Despite Thurs/Friday gains, the VIX saw a net weekly decline of -15.1%, as interest rate uncertainty was finally removed. 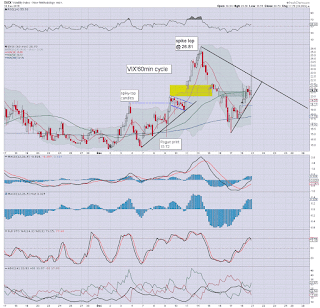 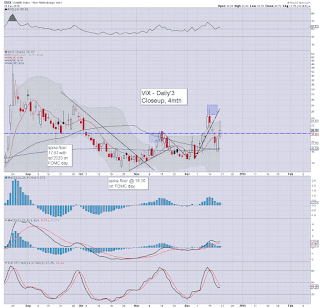 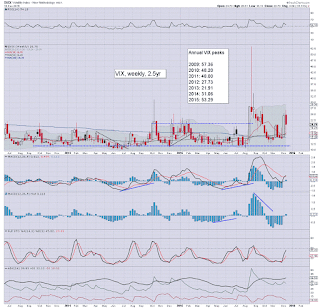 *for those watching the intraday VIX action, there remain sporadic 'rogue prints' as I call them, with one this afternoon to 23.30. This has been a major problem at times, and VIX traders should remember how the VIX didn't even post a print until 9.55am on Aug'24th.
--

So... two consecutive days of gains, but still a net weekly decline. Why?

Well.. with the interest rate issue out of the way, the market has seen one of its long standing aspects of uncertainty removed. Clearly, there will be increasing concern about a second rate hike in the spring, but for now... volatility will be lower than it otherwise would be.

Underlying MACD (blue bar histogram) on the big weekly chart is now positive cycle, but there is high threat of a divergent lower high in the near term.
--

Best guess... renewed cooling to the low teens into early 2016. From there though, unless the equity bulls can push to a new high in at least some indexes, the market is going to see an epic rollover. If that is the case... VIX will push into the 30s in Feb/March.

US equities closed significantly lower, sp -36pts at 2005. The two leaders - Trans/R2K, settled lower by -2.2% and -1.3% respectively. Near term outlook is shaky and borderline, with threat of the 2K threshold breaking. Even a 2-4 week rally of around 4-6% is not going to break new highs. 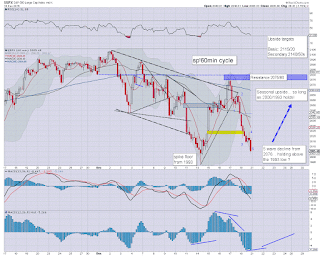 *closing hour action: another wave lower, with a new low. Price action sure was twitchy.. but then it was quad-opex.
--

I do try to refrain from attempting any wave counts these days, but the price structure since Wed' afternoon does offer a rather clear 5 wave decline.

Have a good weekend everyone
--

*the usual bits and pieces across the evening to wrap up day.
Posted by Trading Sunset at 21:01:00
Email ThisBlogThis!Share to TwitterShare to FacebookShare to Pinterest

As things stand, despite significant weakness on Monday, Thursday, and today, the sp'500 is still set for a moderate net weekly gain... somewhere in the range of 0.25-0.75%. Clearly, its not a bullish end to the week, but then.. neither is it the apocalypse as some were recently touting. 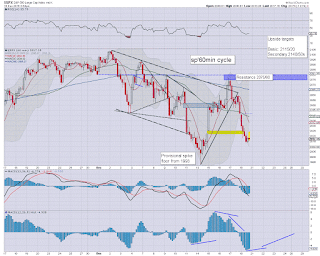 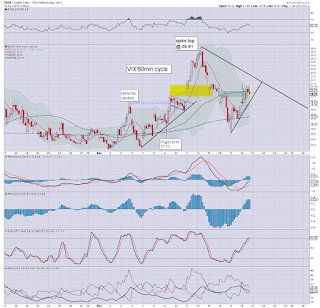 That is some 3% higher though.. and considering next week is just a 3.5 day week... we won't be trading above that until at least the following week.
--

Well, its the last trading hour of the last full trading week of 2015. After today, just 7.5 days to go. 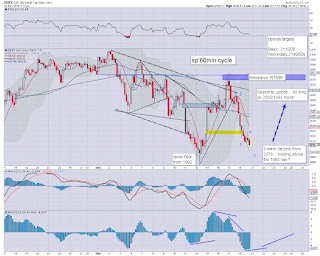 I'm not one for wave counts these days... but the move from 2076 to this afternoon, does look like a nice clean 5 wave retrace.


3.21pm... Equity bears are getting a prime opportunity to exit ahead of holiday week.

From a pure cyclical perspective, the current setup is similar to Monday morning. The probability leans in favour of bulls next week. 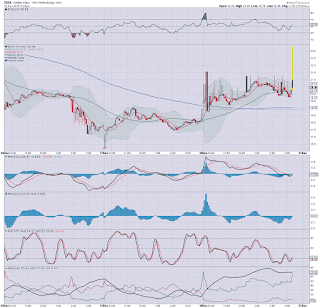 The VIX machine has been twitchy for over a week now... sporadic 'rogue prints'.
- 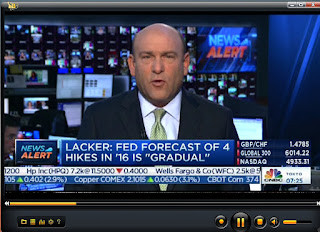 Price action sure feels like its getting exhausted in terms of downside... as the VIX is now in danger of losing the 20 threshold. Bears.....beware!

... back to net weekly gains... which remains a rather bizarre thing to consider.
-

3.51pm.. I'd still argue bears are getting a prime chance to exit into the weekend.

.. back at the close...
Posted by Trading Sunset at 19:57:00
Email ThisBlogThis!Share to TwitterShare to FacebookShare to Pinterest

US equities continue to fight to hold the earlier low of sp'2013. Best case for the equity bulls right now is a weekly close in the sp'2020s, which would probably equate to VIX cooling back under the key 20 threshold. Metals are holding strong gains, Gold +$15, whilst Oil continues to swing... now -0.2% in the $35s. 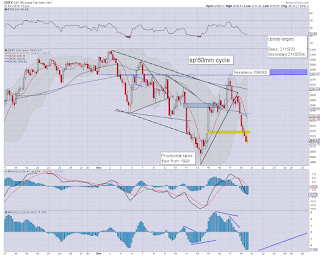 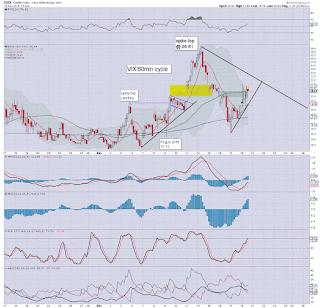 *stockcharts has finally fixed itself, intraday charts are back
-

So.. two hours left of a roller coaster week.

Even if the bulls can hold the market above 2K into the weekend (seemingly probable) there is clearly threat of it happening next Monday.

At least its not boring, right? 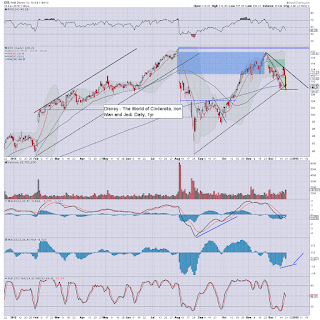 A real mess, having been tainted by a down grade. Even the CNBC host suggested the BTIG analyst had waited for Star Wars day to proclaim a target of $90.
-

Equities break new intraday lows, with the sp' just 13pts from losing the giant psy' level of 2K. Equity bulls face a real problem if 2K is lost.. whether into the weekly close.. or any point ahead. For the moment, VIX is remaining relatively subdued... a weekly close above the 20 threshold is currently borderline. 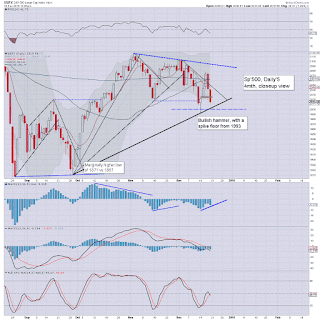 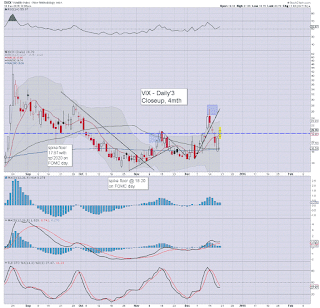 It is notable that right now, we're still net higher on the week, even though it sure doesn't feel like it.

Without question though.. if things get nasty into the close...  well....  the downside targets would be pretty obvious.

Posted by Trading Sunset at 17:57:00
Email ThisBlogThis!Share to TwitterShare to FacebookShare to Pinterest

US equity indexes are battling to build a floor from sp'2018, with VIX spiking to 21.55. Price action remains messy, but then it is quad-opex. So far... there is zero market panic, ahead of Santa next week. As things stand, the sp'500 is still set for a net weekly gain of around 0.5%. 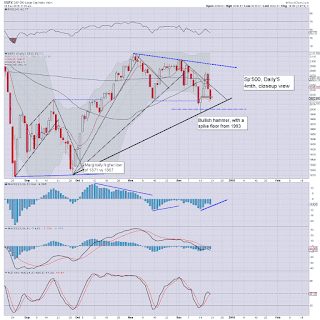 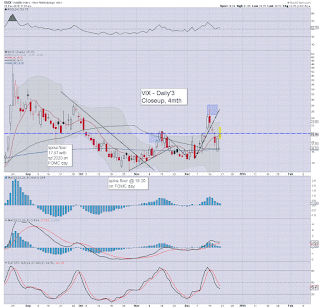 *stockcharts is having continued issues with intraday candles.. so I'll stick with daily charts until that is resolved.
--

Not exactly a crash is it? No doubt those calling for a crash last week will merely push it out to next Monday.. and when that doesn't happen, they'll push it out to late January.

It truly is tiresome reading some of the nonsense out there, but then... I try to read everything I can, even from sources I don't much like.

*as of next Monday, trend support is around sp'2005. ANY price action under 2K would be a surprise, and would raise a legitimate red flag.

Hmm... 16pts away from causing all sorts of trouble.
Posted by Trading Sunset at 16:52:00
Email ThisBlogThis!Share to TwitterShare to FacebookShare to Pinterest 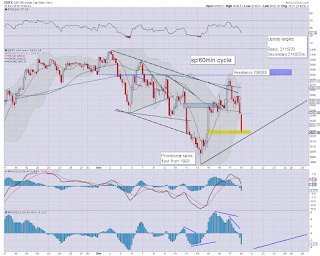 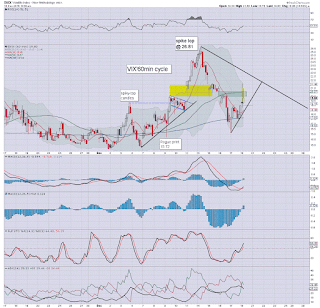 So... a morning washout on what is a pretty dynamic quad-opex. Considering the entire year of price action, a Dec' opex close around 2050 would be the more natural pin level for the market makers.
- 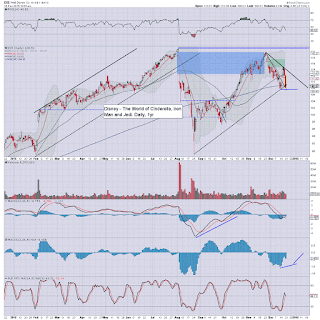 Downgraded by BTIG.. with a target of $90, on the basis that ...  'the outlook for 2017/18 is overly bullish, as impacted by ESPN.' Frankly, its nonsense talk, but Mr Market is clearly spooked, and has whacked the stock significantly lower.. on Star Wars day no less. 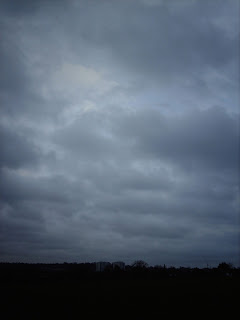 Yet another day of grey gloom... although it sure ain't cold.
--

time to cook
Posted by Trading Sunset at 15:53:00
Email ThisBlogThis!Share to TwitterShare to FacebookShare to Pinterest 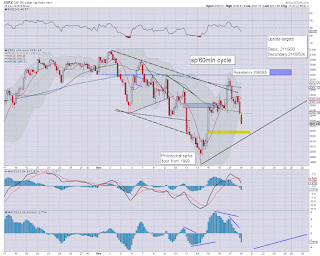 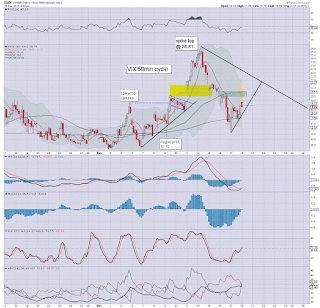 *VIX is very unstable right now... unless its a rogue print or two, someone is heavily shorting volatility in the opening 30minutes.
--

**stockcharts is having tech' issues, as the opening candle was reset, and no longer shows the move to sp'2027.
--

I suppose you could count ongoing price action as an ABC retrace from the Wed' high of sp'2076.

If so.. we should hold the 2020s... and see a rather clear latter day recovery, with net daily gains.

Right now... I'm still leaning bullish, but with each passing day... a new historic high (>2134) looks ever more difficult. Even if we do see a new high into Jan'2016, can the market hold it? A key warning signal would be a Jan' close under the monthly 10MA.

There are notably spiky-top candles in the VIX,  HIGHLY suggestive this morning is a washout.. much as Monday morning (sp'1993) was.

BEARS beware.
--
Posted by Trading Sunset at 14:52:00
Email ThisBlogThis!Share to TwitterShare to FacebookShare to Pinterest

Good morning. US equity futures are broadly weak, sp -15pts, we're set to open around 2026. A morning washout to the 2025/21 gap zone appears inevitable, along with VIX around 20/21. A latter day recovery to 2045/50 should be considered rather important to the equity bulls. 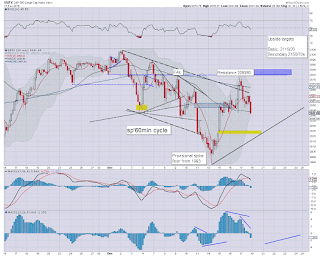 Well, here we go... its quad-opex, and naturally some out there are calling for an imminent crash under sp'2K... and to the 1800s.

I still find such talk as pure nonsense, as the same people were saying there would NEVER be an int' rate rise. Ohh, and they were also the same people relentlessly top calling since 2010/11.

Today will be rather key.

As someone who has followed Oscar for many years, it is very kooky how spooked he is becoming.

I am in full agreement that the current rally MUST break and HOLD new highs, otherwise... we'll have a grand top. If that is the case... first 'soft target' would be the sp'1600/1550 zone.

With 8 trading days left of the year for the Asia markets... neither market looks set to re-take the monthly 10MA.. with price structure... a giant bear multi-month flag.
--

Have a good Friday.
Posted by Trading Sunset at 13:01:00
Email ThisBlogThis!Share to TwitterShare to FacebookShare to Pinterest

Despite a rather significant net daily decline of -31pts to sp'2041, the sp' is still net higher on the week by 29pts (1.5%). Even a brief gap fill to the 2025/21 zone early Friday will not do any real damage to the market. Considering rates have now been raised, the US equity market is holding together rather well. 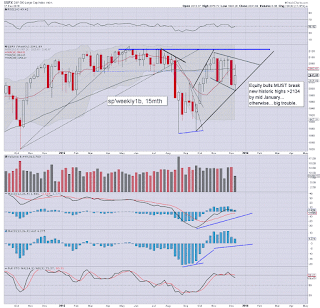 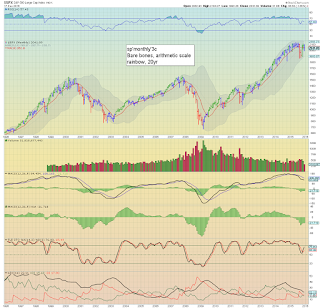 With the market losing the Wed' gains, the monthly 'rainbow' candle has flipped from green to blue. As things are, I'm still expecting the 2100s before year end (if not next week).

Unless the equity bears can manage a Dec' close under the monthly 10MA (2052)... the default trade remains to the long side.

More importantly... it will be QUAD-opex, with price action inclined to be a little more twitchy-wild. From what I see, a Friday close around 2050 would be the most natural level for the market to settle at.

*Fed official Lacker will be speaking on the economy in the 12pm hour.
-- 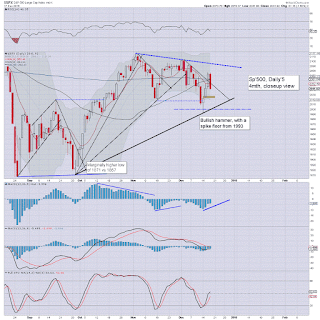 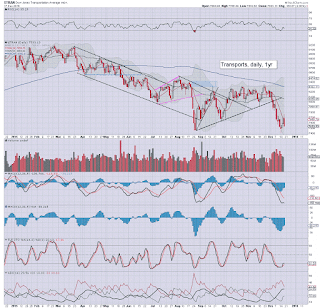 Most notable.. bearish engulfing candles on a number of indexes, as opening gains quickly failed to hold.. with increasing weakness.. especially into the close.

It would seem the Tuesday opening gap of sp'2025/21 will be filled early Friday.. before equity bulls can push for a sustained rally into year end.