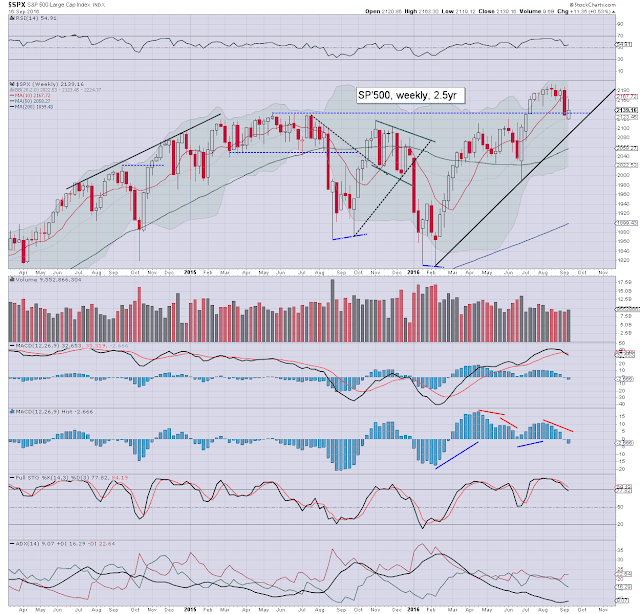 Any sustained price action in the 2050s or lower, would bode EXTREMELY bearish, as other indexes would also be breaking their respective rising trends and multiple aspects of support.

Best guess: no rate hike until the Dec' FOMC, with equities rising into end month... and broadly all the way into spring 2017.

Equity bears can not justifiably get confident, unless the market puts in a few daily closes in the 2050s or lower. If that happens, then talk of 'autumnal/winter' upset to the 1600/1500s would become a valid scenario.
-- 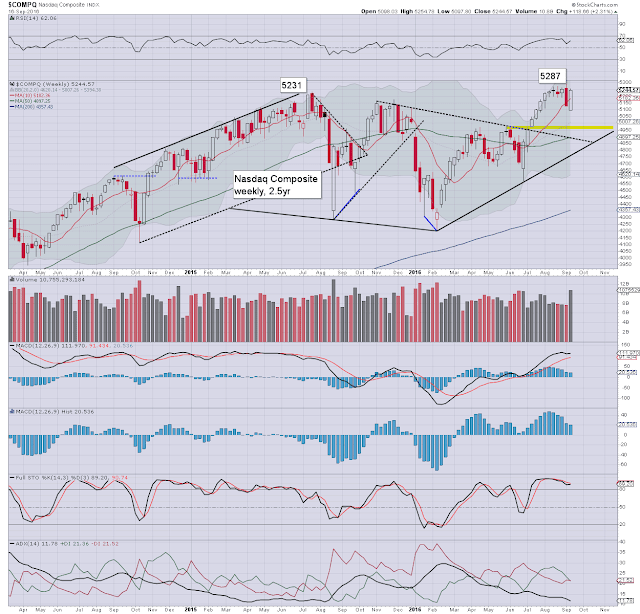 It was the best week for tech since late June, with the Nasdaq settling +2.3% @ 5244, a mere 43pts shy of the recent historic high. The upper bollinger will be offering the 5400s into end month. Any Sept' or Oct' close in the 5300s should be enough to begin awakening the mainstream to the notion that the 6000s are a valid target for late spring/early summer 2017.

Equity bears need to see a break below the 5000/4950 support zone, to become confident that the market will unravel this autumn. Right now, that seems extremely unlikely, as Q3 earnings will likely come in at least 'reasonable'. This week's very significant gains in tech behemoths - AAPL and INTC, of 11.4% and 6.3% respectively, bode well for the broader market. 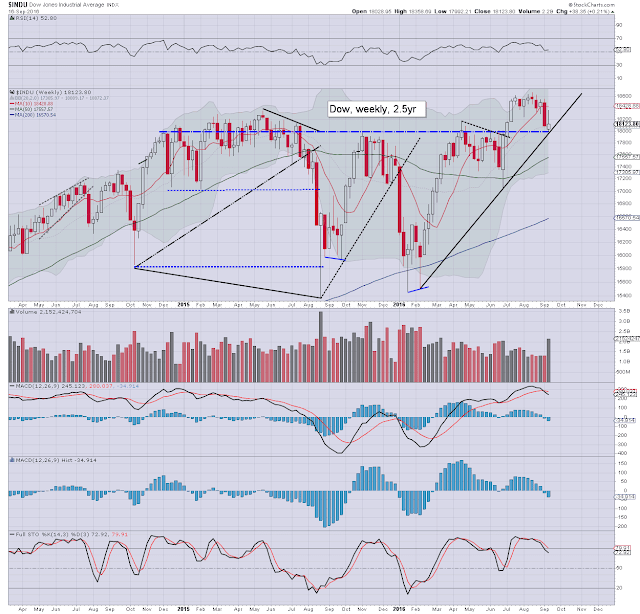 The mighty Dow saw a minor net weekly gain of 0.2%, again settling above the key threshold of 18k. As of next week, rising trend will be around 18k. If there is a failure, first downside target would be the 17500/400 zone. The BREXIT low of 17063 looks extremely difficult to reach, even if the fed raise rates. 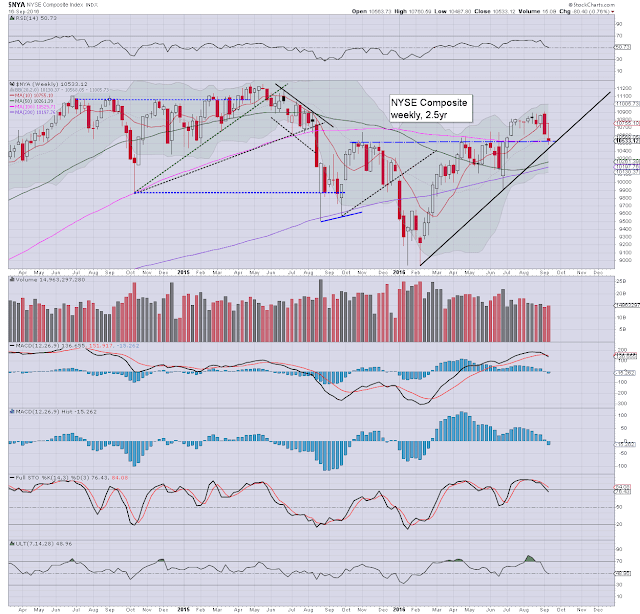 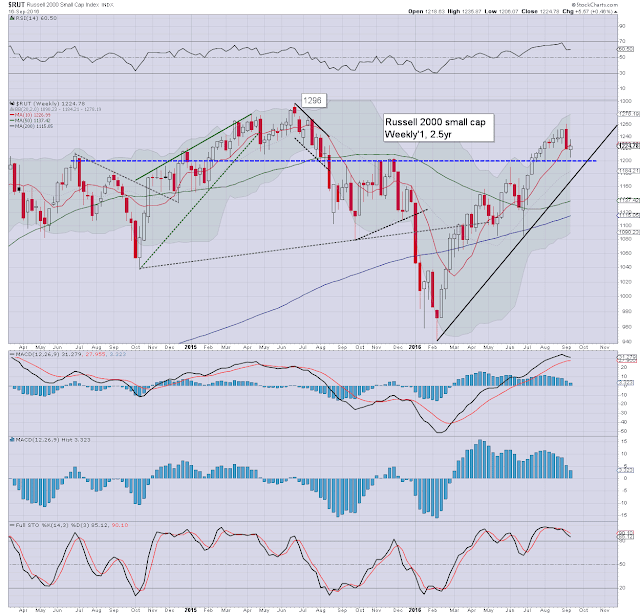 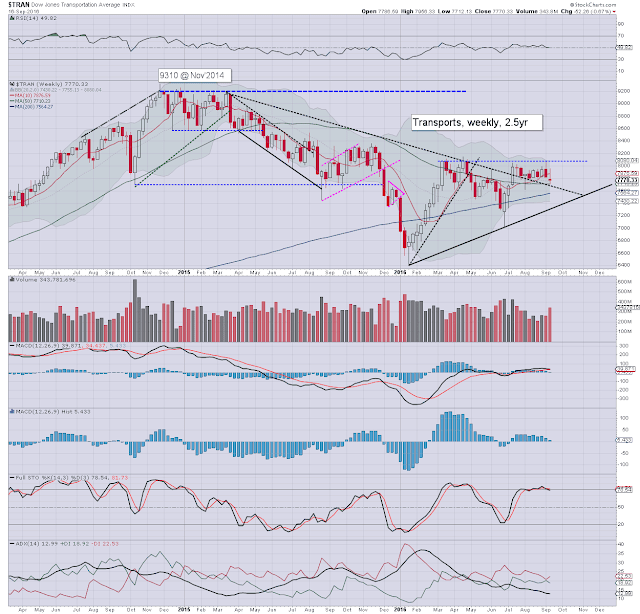 The 'old leader' - Trans, saw a net weekly decline of -0.7%, settling @ 7770. The 8K threshold remains strong resistance. Rising trend will be in the low 7300s next week, and that is around 5% lower. Those equity bulls seeking broader market strength into year end, require a break above the April high of 8149. Based on the past four months of price action, that will not be easy.
--

Despite some ongoing weakness, all US equity indexes are holding rising trend from the Jan/Feb' lows.

Most indexes (Transports is the exception), are broadly building a series of higher highs and higher lows.

The headline indexes - sp/dow/nasdaq, could easily break new historic highs in the near term. The R2K is next to follow.

If rising trend is broken, there is a viable 3-4% downside, before causing any critical technical damage, which would merit 'alarm bells', such as the sp'2050s.
--

FOMC announcement @ 2pm. The market is very mixed about whether the fed will raise rates. On balance, a 'no change' outcome would be a relief to the market, and offer a valid excuse for renewed equity upside.

*there is a fed conf', with Harker, Lockhart, and Mester on Friday @ 12pm. That will no doubt get at least some media attention.
--


If you have valued these ongoing posts since 2012, you can support me via a monthly subscription, which will give you access to my continuing intraday posting @ permabeardoomster.com

*the next post on this page will appear Mon' 7pm EST
Posted by Trading Sunset at 17:00:00
Email ThisBlogThis!Share to TwitterShare to FacebookShare to Pinterest 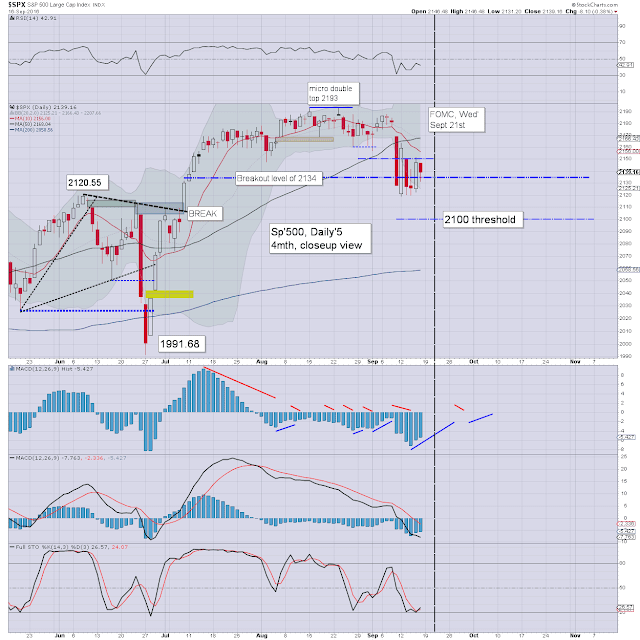 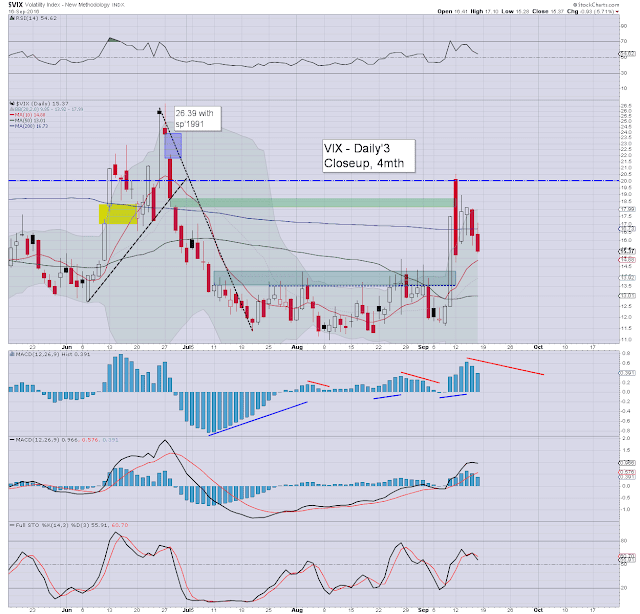 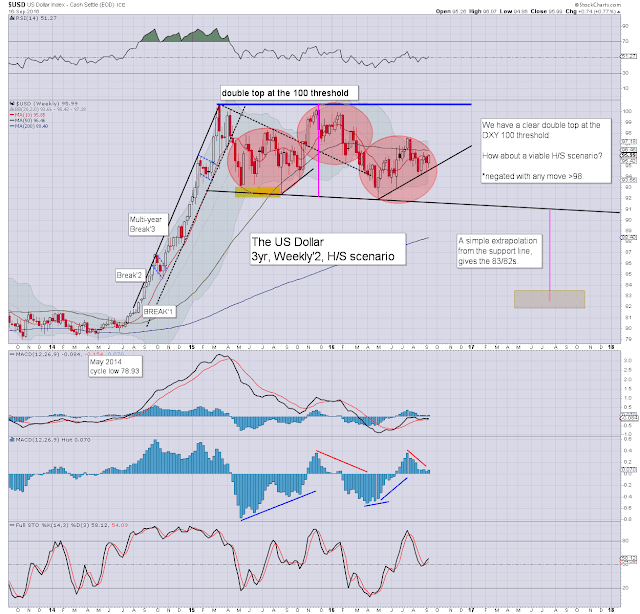