Whilst the main US equity indexes closed mixed, general market volatility continues to slowly decline. The VIX closed -4.5% @ 12.67. This remains a remarkably complacent market, but then..the Fed has the markets back. What is there to fear? 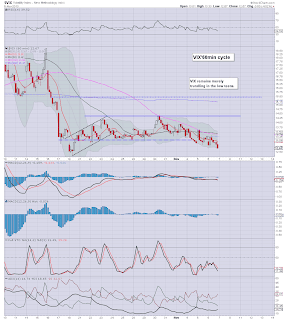 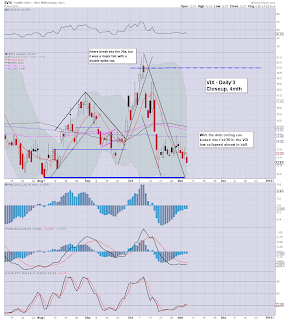 *first..I want to highlight the usual closing minutes action. Often is the case, Mr Market will whack the VIX lower in the last few minutes - or in the 15 mins of AH action. Today was a classic. 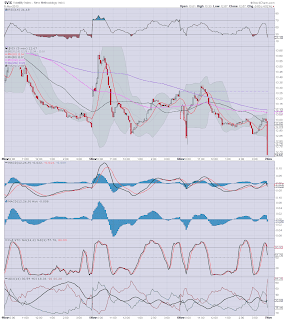 There is little to add. VIX looks set to remain very low for the remainder of the year. Certainly, I do not see VIX 20s until mid/late Jan' 2014.

The main indexes closed rather mixed, with the Dow leading, +128pts @ 15746, whilst the Nasdaq closed -0.2%. The two leaders - Trans/R2K, closed moderately lower, -0.7% and -0.45% respectively. Near term market outlook is for more minor chop/consolidation. 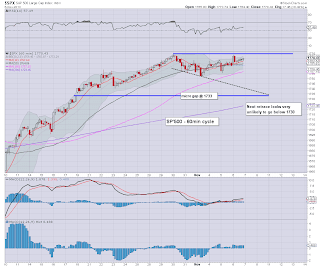 What to say about today?

Without getting wrapped up in the minor noise..the underlying upside pressure is clearly still the case..as especially seen in the Dow.

more later on the VIX
Posted by Trading Sunset at 21:02:00
Email ThisBlogThis!Share to TwitterShare to FacebookShare to Pinterest

All things considered, it will surely be a quiet hour to end the day. The main indexes remain mixed, with a pretty strong Dow, whilst the Nasdaq remains slightly red. VIX is showing a fearless market...in the 12s. Incredible...but then..I'm easily surprised. 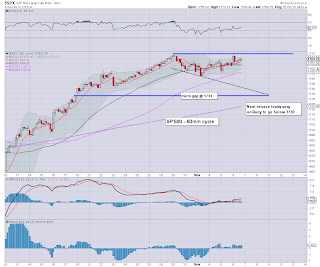 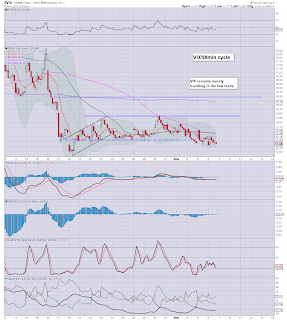 Not much to add..on what is just another kooky day at the worlds most twisted legal casino.
--

3.41pm... dull dull dull.        back at the close..with a summary of today's dullness. Urghhh
Posted by Trading Sunset at 19:52:00
Email ThisBlogThis!Share to TwitterShare to FacebookShare to Pinterest 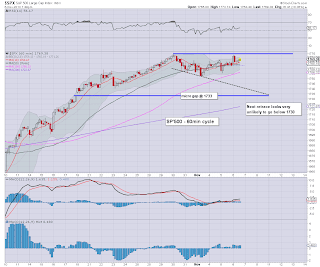 It really is just another typical day in market land.

The sp' hourly chart is starting to look like the VIX - which has now been flat-lining for some weeks.
--

A question the bears need to ask themselves..do you not think the dip buyers will be piling in on any minor wave lower? Hell, even the 1730s look tough to hit within the next 2-4 trading days.
Posted by Trading Sunset at 18:54:00
Email ThisBlogThis!Share to TwitterShare to FacebookShare to Pinterest

Whilst the Dow is holding gains of 100pts or so, the two leaders - Trans/R2K, are both lower by around 0.5%. There is certainly some weakness out there, but equity bears are still lacking any real downside power. Oil continues to build significant gains, +1.8% 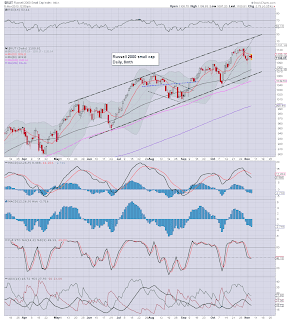 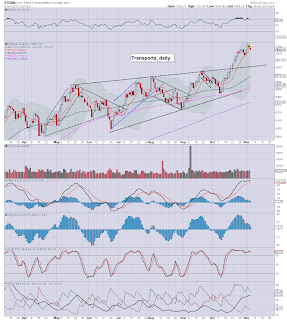 I guess it is somewhat an interesting day.

We have the Dow trying to make a clear break..and hold new historic highs, but there is distinct weakness in the two leaders.

As ever...with sig' QE, bears face the old problem of underlying upward pressure.
Posted by Trading Sunset at 17:54:00
Email ThisBlogThis!Share to TwitterShare to FacebookShare to Pinterest

Equity indexes are pretty mixed. The Dow is +90pts, whilst the Nasdaq, Trans, and R2K are all moderately lower. Metals are starting to look weak, whilst Oil is building gains, +1.7%. Notable mover of the day remains TSLA, -$24 @ $152. 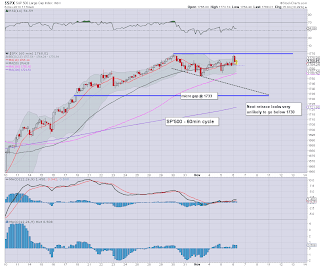 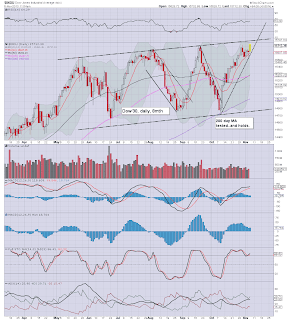 It really is a bit of a mess today.

I think it is fair to say, without the QE (in a normal universe), we'd be seeing some rather significant declines today. Instead of declines though, we have a Dow index that is trying to break..and hold historic highs.

time for lunch!
Posted by Trading Sunset at 16:56:00
Email ThisBlogThis!Share to TwitterShare to FacebookShare to Pinterest

Whilst the main market remains something of a confused mess, there is some notable action in Tesla (TSLA), which has failed to hold the key low of $153. There really isn't any support until the $110/100 level, where the 200 day MA is lurking. 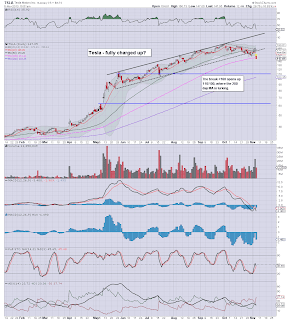 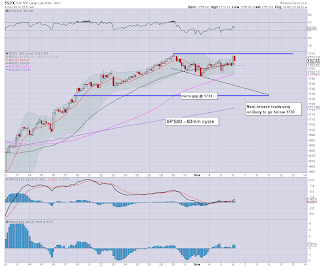 TSLA stockholders have seen the important support fail..and I'd be very surprised if we don't see 110/100 within the near term.

I see many out there with targets of 125/20..but really...why wouldn't Mr Market want to wash out all the momo-chasing maniacs down to the big $100 psy level ?

The TSLA bulls had ample warning...not least via the price action of NFLX and FB, both of which had reasonable earnings, but which the market still sold lower.
- 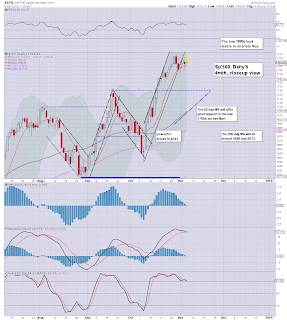 Bears need to get a daily close in the low 1750s...   that'd make for an interesting reversal.
Posted by Trading Sunset at 15:53:00
Email ThisBlogThis!Share to TwitterShare to FacebookShare to Pinterest

The sp'1775 high is still holding, and market remains vulnerable to a moderate down wave. Yet...there is huge QE today, and underlying pressure is clearly still to the upside. Metals and Oil holding moderate gains, whilst the USD is weaker, -0.3%. 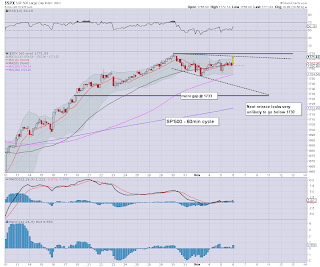 The current price action remains a bit of a mess.

For those with eyes on the bigger picture...its a case of ignore the minor moves..and focus on the broader bullish weekly/monthly cycles.
-- 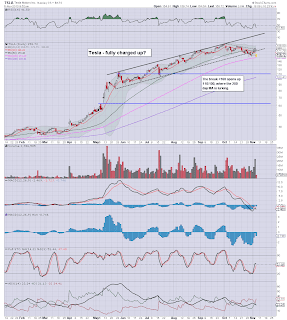 Downside target zone is a rather obvious 110/100...within weeks..perhaps days. 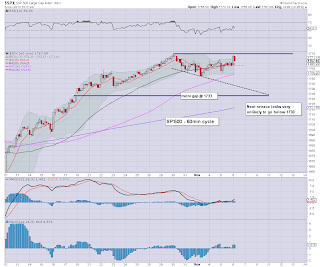 Regardless..underlying pressure is still upward in the weeks ahead.
Posted by Trading Sunset at 14:52:00
Email ThisBlogThis!Share to TwitterShare to FacebookShare to Pinterest 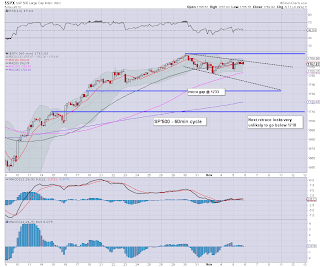 So much for even a move to the sp'1730s. That now seems unlikely, not least if we are trading >1775 sometime today.

For those who were bravely holding short overnight, this is a lousy start to the day.. well, aside from the TSLA shorts.

Not surprisingly, Oscar is looking for Trans 7300, along with further downside in Gold...and I'm in agreement with both.
--

How much higher by year end?

Whilst the equity market chops around in the sp'1760/50s, the bigger question is how much higher can the market climb by year end? Certainly, the low/mid 1800s look likely, but the weekly charts will be pretty over-stretched by early December. Some significant year end profit taking seems likely. 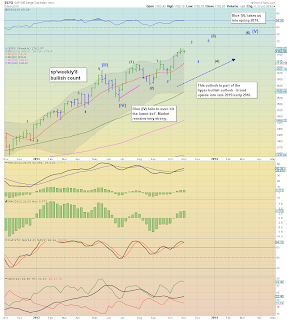 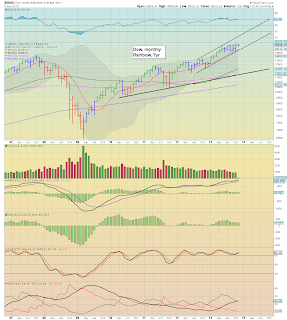 Unquestionably, the primary trend remains to the upside. The Dow monthly chart is pretty clear. Baring a break <15k, the trend is strongly bullish.

We have the fifth green candle on the weekly 'rainbow' chart, and there is simply nothing bearish right now. Indeed, first support is around the 10MA of 1716..but that is rising pretty strongly, and will be 1750 by end Nov.

Upper bol' on the weekly cycle is offering 1776 in the immediate term. However you want to count this nonsense, we sure aren't trending down. I have to say, I'm utterly bemused how anyone could dare call a top right now, not least with the weekly charts still outright bullish.

Maybe if we get 2 or 3 blue candles by early December, then we can see a little down wave, but even then...post Christmas..we'll more than likely surge higher - just like this past January.

I'm holding to the original outlook I posted some months ago...I'm seeking a yearly close..somewhere in the sp'1850/1950 zone.

Certainly, it will be damn difficult to close in the 1900s, not least since there will be a massive likelihood for year end profit taking. Yet...QE continues at $85bn a month, and the market remains powerfully strong.

There is simply nowhere else for the 1trn of 'new money' to go. Never mind the capital inflows from the EU/Asia. The US capital markets are like a giant vacuum, and US equities look to be strong into spring 2014..before some degree of intermediate multi-month correction.

There really isn't much of anything tomorrow, aside from the usual QE nonsense.

A somewhat tiresome Tuesday...so...that is it from me... for today.

The main indexes closed somewhat weak, with the sp -5pts @ 1762 The two leaders - Trans/R2K, both closed lower by around 0.5%. The near term outlook is moderately weak, but a further wave higher across late Nov/early December seems very likely to take the sp' into the low 1800s. 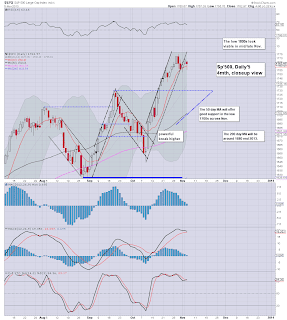 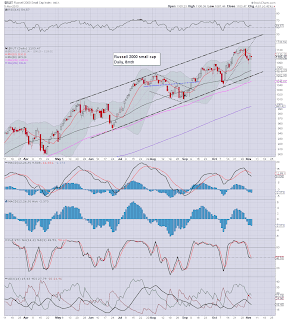 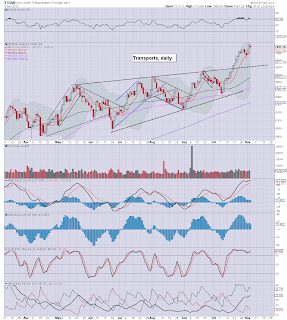 Another frustrating day for the equity bears. Those opening declines were weak, and we even saw the Dow see a 129pt swing to trade moderately higher in the afternoon.

There remains an opportunity for the bears to knock the market lower into the sp'1730s this week, but with heavy QE this Wednesday and Friday, it will be very difficult.