A little bonus for the bears just after the close (VIX trades for 20mins after the 4pm close), VIX closed in the 24s. This is a good significant move higher, with the target for this new wave somewhere in the 27/29 zone - probably within the next 2-4 trading days. 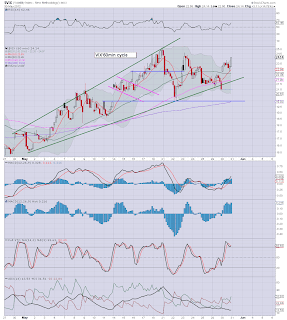 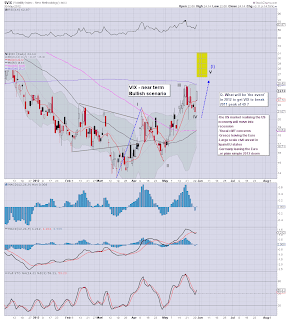 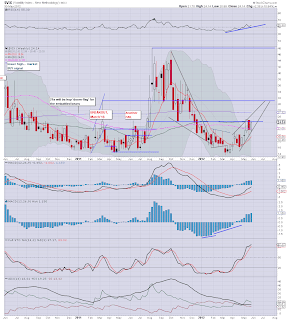 The bulls could not break the VIX below 20 yesterday, and today we've seen a good confirmation for the bears. We have yet to see any major panic/capitutalion day/s in the market...the VIX looks set to jump higher in the coming days.

If Sp' can break below 1270 early next week, then there is the chance VIX could briefly break into the low 30s.

More later...looking at the daily index cycles.
Posted by Trading Sunset at 22:30:00
Email ThisBlogThis!Share to TwitterShare to FacebookShare to Pinterest

Market closed relatively weak, certainly not at the low of the day, but overall...today does indeed completely reverse all of yesterdays nonsense. The VIX gain of over 12% confirms this move lower, and so the bears can feel reasonably confident into the weekend, and perhaps beyond. 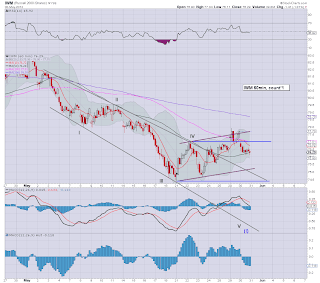 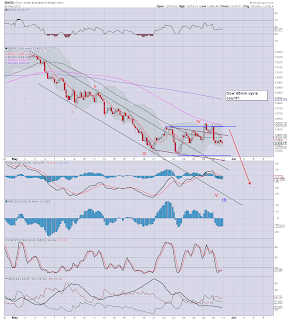 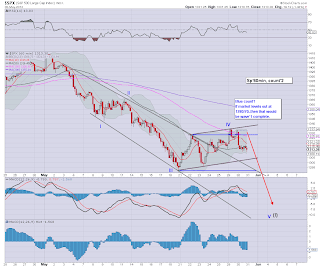 Its looking good for the bears tomorrow and also Friday. We have GDP data and the monthly jobs data tomorrow and Friday respectively - both could easily knock the market down a further 3% - getting us to the sp'1280 level.

The daily cycle is especially warning of major downside,  with target levels under <sp'1280. - more on that later.
Posted by Trading Sunset at 21:03:00
Email ThisBlogThis!Share to TwitterShare to FacebookShare to Pinterest

3pm update - rolling over into the close

The market has seen a bounce - as the 15min cycle displays clearly, and I'm guessing we are going to rollover very nicely into the close. A close under 1315 - last Fridays low, would be useful. A close at the low of day sp<1311 would be very bearish for tomorrow.

As often...look to the VIX, a close in the 24s would be good confirmation for those seeking sp<1300 by the Friday close. 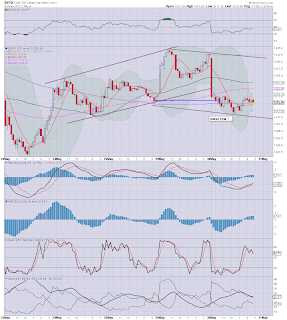 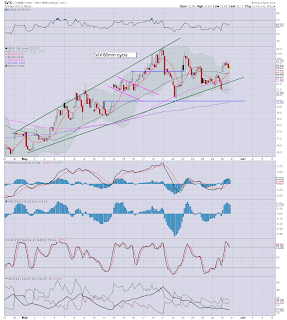 More after the close!
Posted by Trading Sunset at 19:57:00
Email ThisBlogThis!Share to TwitterShare to FacebookShare to Pinterest

A lot of the chess pieces were on the move today, bond yields making new lows..the Euro breaking 1.24, and WTIC' Oil breaking under 90 - down around $3.50 today. Equities 'should' in theory be a lot lower than they currently are, and I will look for them to catch up - with much further declines tomorrow/Friday. 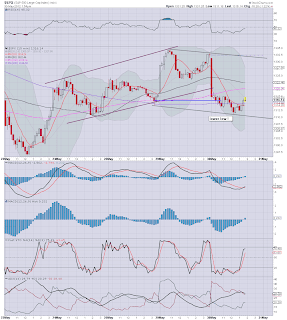 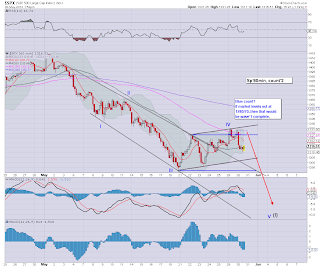 I don't think bears - who took new positions this morning have anything to be concerned about with this minor up move. For the serious money, good stops of course - either at yesterdays high of sp'1335..or tighter..1330/25.

It will be interesting to see how the market closes.Yesterday we saw a mini ramp, can we close today at the low of the day?

Arguably, bears really need a close under the hourly 10MA @ 1321. A close under 1310..would be a real gift for the bears..but that seems unlikely.
Posted by Trading Sunset at 18:58:00
Email ThisBlogThis!Share to TwitterShare to FacebookShare to Pinterest

1pm update - all aboard the bear train

Whilst lightning bolts start to rain down outside (a very appropriate mood setter), I've a screen of red. After yesterdays latest nonsense, once again 'reality' returns to our favourite casino. How long will the break from the delusion that 'everything is fine' last? A day, a week..or even into late June?

The primary monthly cycle target remains sp'1100. In this new wave lower, a move to at least 1280..possibly 1225/00 seems viable - if the market finally gets spooked, so look to the VIX. 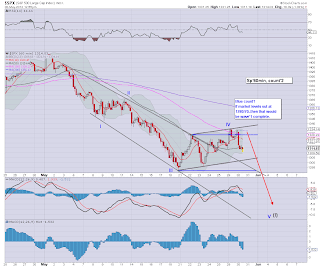 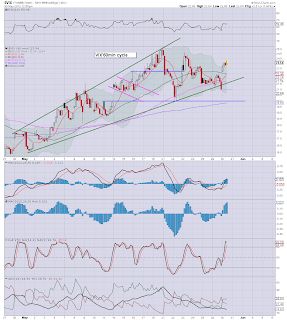 VIX is confirming everything very well, a close in the 24s would easily suffice..and it opens up a jump to the high 20s by the Friday close.

*look to the Sp' breaking 1305 (lower channel of the daily bear flag), and then a fast move under 1300...to confirm both the daily and hourly cycle flags.
--
Much more later...those daily charts will be paramount to focus on after the close.
Posted by Trading Sunset at 17:56:00
Email ThisBlogThis!Share to TwitterShare to FacebookShare to Pinterest

For the bulls, today is probably starting to get really annoying. I'd suggest anyone who is bullish take a look at the daily chart for any of the indexes. An added extra would be if they took a peek at the monthly cycle. 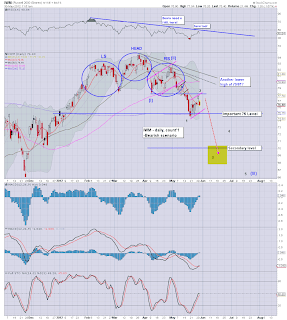 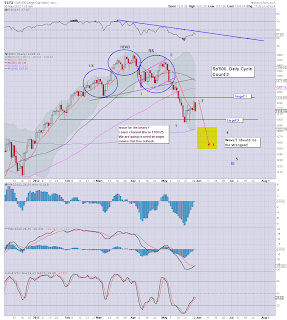 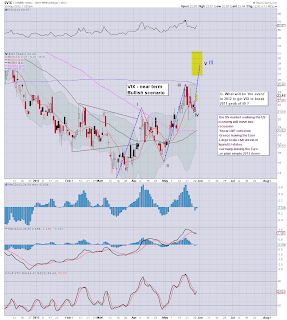 *the count on all of the above charts is not something I am very happy about...but the target zones (yellow boxes) I still hold to.
--
I believe the bear flags on the daily index cycles are going to be confirmed..with the Transports almost having done that already.

Look for major VIX upside all the way into Friday, target range is around 27/29. A brief spike into the low 30s is viable if we break sp'1260 - but that would seem unlikely until next week, if at all.

Time for lunch!
Posted by Trading Sunset at 16:54:00
Email ThisBlogThis!Share to TwitterShare to FacebookShare to Pinterest

The daily cycles are now key to focus on, the 'old leader'...is leading the way lower.... 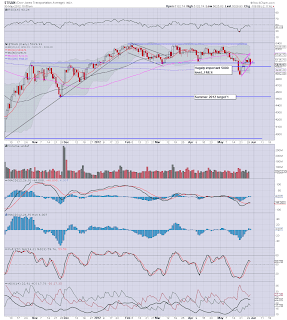 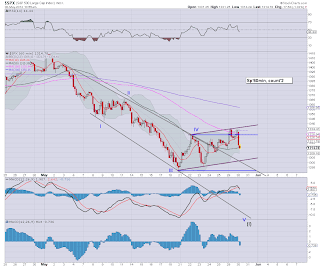 The transports is again leading the way...and its even quite close to breaking the big 5000 level - which I warned about last night. You can see a clear bear flag...and its arguably close/is breaking it already this morning.

I'm guessing we do seem the tranny break 5k...and that in my view means sp'1300 WILL be broken...and then 1291...opening up considerably lower levels.

As was the case since the 16 day down cycle, we've had ZERO panic/capitulation in this market. Perhaps this wave lower..is where we will see it.

I suppose I could label the past week a wave'2...in which case today is the start of a 3 - a severe collapse wave..but for the moment..lets just see if we can first break 1300.

I'm guessing we will...no later than the Friday open.
Posted by Trading Sunset at 15:59:00
Email ThisBlogThis!Share to TwitterShare to FacebookShare to Pinterest

With the market dropping around 1%, things are starting to get real interesting again. The bigger cycles remain bearish of course, so the underlying pressure is ALWAYS downward. So far the VIX is spiking higher...and confirming trouble for the rest of this week - which is filled with key econ-data. 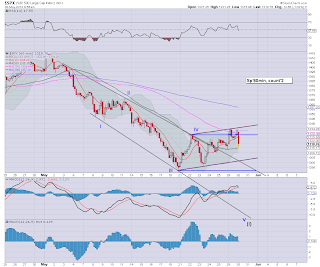 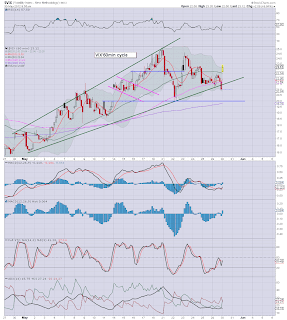 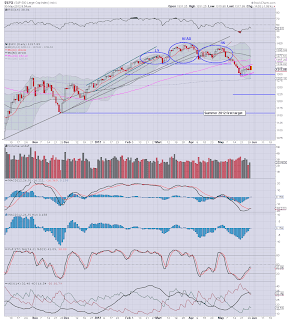 *the big money players will likely pile in on the short side once we break 1300 again.
---

What will be useful in the days ahead, is the speed/style in which we fall. If its just minor moves (and I'd include today's move so far)...then we're likely going to level out around 1270/80. However, if we start falling dow 275pts or more, then maybe a move to sp'1225/00 is viable.

It does look like we have an interesting day ahead.....more later!
Posted by Trading Sunset at 14:56:00
Email ThisBlogThis!Share to TwitterShare to FacebookShare to Pinterest

Good morning! Futures are showing significant losses of around sp-10pts (we were down -14 earlier). I'm not sure what the reason was, but there were some crazy swings to the upside around 7am (See Finviz). The bears will clearly be somewhat delighted to see this opening move lower...will the bulls/algo-bots buy the dip? 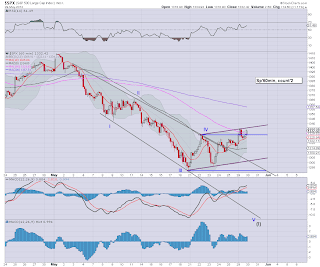 Only with a move under at least 1315 can the bears start to wonder if we are seeing a trend change.

Even more so, only with a break below sp'1300..(32 points away right now!) can the bears seriously consider that the current rally is over.

*It sure does look like a bear flag on that hourly chart..to confirm it..we need a break to a new low sp<1291...41pts lower.  We have GDP and Jobs data Thur/Friday, so there IS the possibility of a major down move.

The bears have an opportunity this morning... will they be able to hold onto such declines...and build on them?

More across the day.
Posted by Trading Sunset at 13:33:00
Email ThisBlogThis!Share to TwitterShare to FacebookShare to Pinterest

A poster pointed out something to me which I've been remiss to note. The trend line from the index lows of March 2009, all the way up to last October'2011..such a trend line (purple) offers a possible market floor of sp'1225/00 by late June/July.  Will that be the low for this year though? 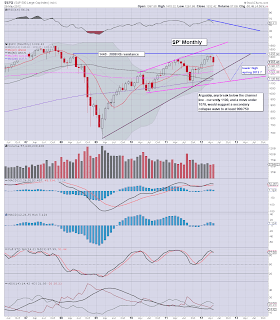 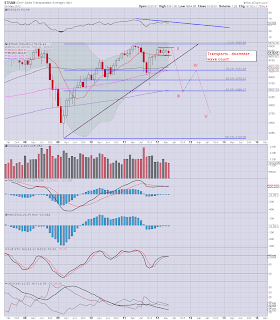 There is no question - as I've noted for the world indexes for 3 months now, that we are rolling over. The issue remains..where is the floor? When will the printing man..aka..the Bernanke appear? The Fed never pre-empts a market fall, so at what level might he step in to announce he is spinning up the printers again?

I have to think that sp'1225/00 will simply not be enough of a down cycle for the Bernanke to appear. The natural level in my view remains sp'1100/25 - no later than October.

Re: the Transports chart....

You can ignore the 'crazy talk' count, I'm not much a fan of it myself, but the key issue is that the 5 month flat top did break below 5000, and we're likely going down to at least 4500. Were there serious social/financial 'issues' this summer in the EU, then trans'4000..if not the natural 3500 Fib zone area appears still very viable.

--
**Special note...I do really welcome all comments, especially when it comes to targets for the indexes (stocks, VIX, currencies too!). so if you think I'm failing to note something important, please let me know!
--

As for Wednesday, there is only some housing data to come, doubtless the market will be pulled in both directions by more endless rumours from the EU. The bulls do have the ball right now, but they are facing multiple brick walls of resistance at sp'1340, 50/60 and especially the 1370/80 zone ;)

Goodnight from London City.
Posted by Trading Sunset at 03:00:00
Email ThisBlogThis!Share to TwitterShare to FacebookShare to Pinterest

With the main indexes rising over 1% today, everything is back to risk-on, yes? Err, no. The bigger monthly index cycle can easily dismiss such market action as mere 'noise'. Lets look at a few of the key daily cycle charts... 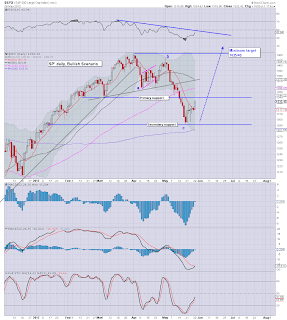 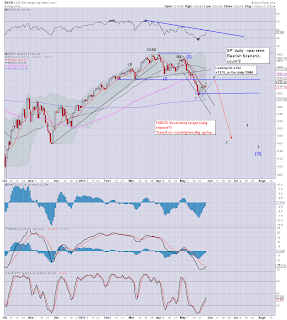 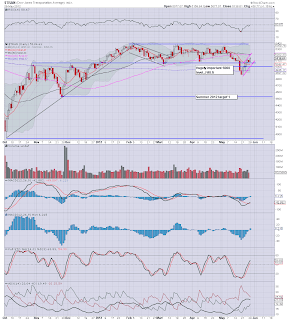 The transports - despite today's rally, remains in a very clear bear flag. There is going to be a real struggle to break above 5200/250 by the end of this week. In fact, I'd be looking for the tranny to break below 5000 in the coming days. If that's the case...then we should look for sp to break under 1291.

My best guess for the mid-term would be something like the second chart - where we level out in this wave'2. These small moves are always a tricky thing to guess, and in the bigger scheme of things, it doesn't matter anyway.

As for the bullish scenario chart, well, I suppose if the Bernanke appeared - overtly hinting at QE3, and if the Greeks formed a cohesive new government in June..maybe then I could envision this market breaking to a new high >sp1422. Yet even then, the econ-data (both within the USA, and worldwide) pretty much sucks, there is an increasing weakness across the world economy. The idea that Sp' can comfortably remain above 1300...no, I don't think so.

Also, considering that the VIX continues to show some underlying strength...I'm still guessing the indexes will be considerably lower in the coming weeks and months.