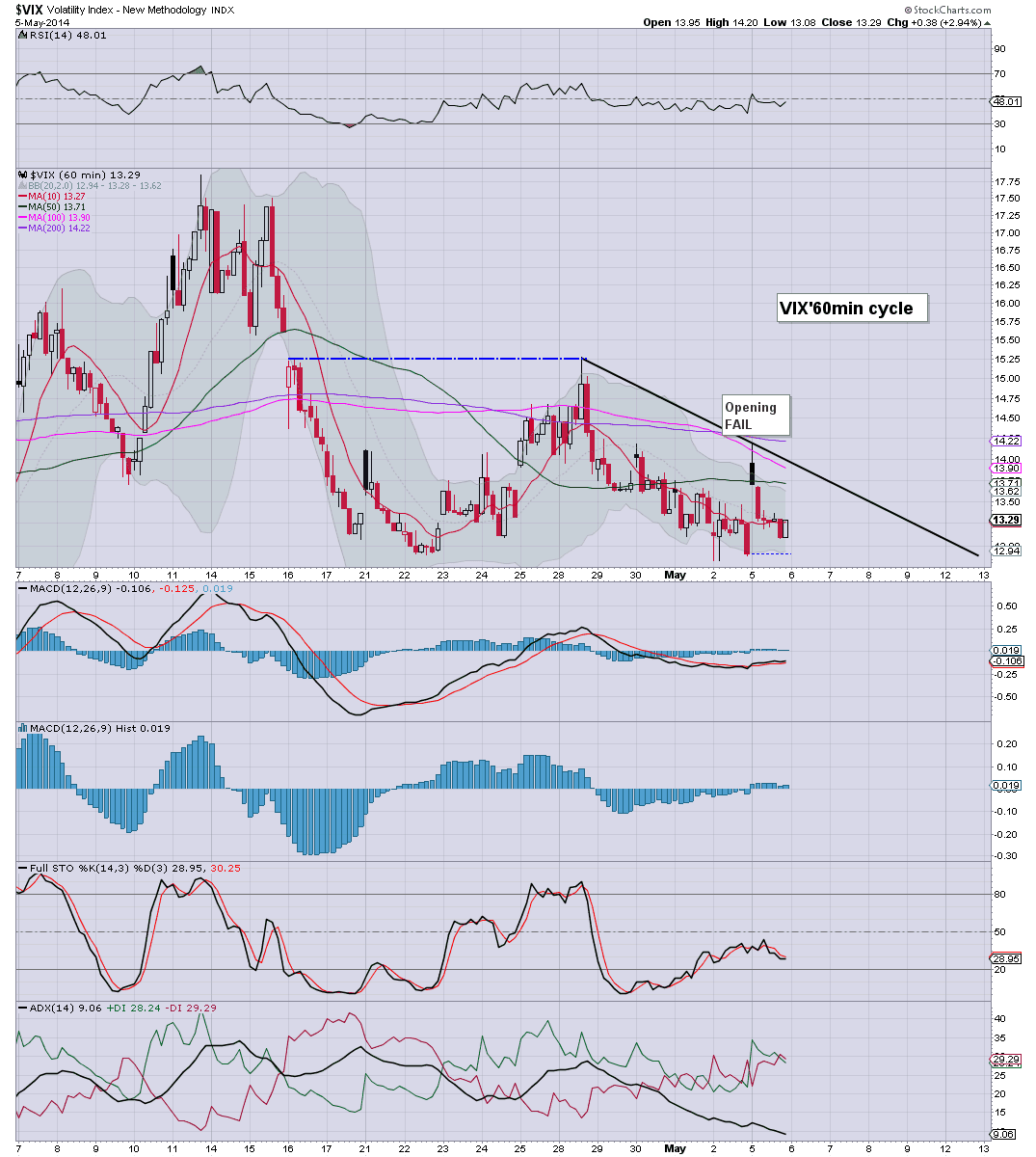 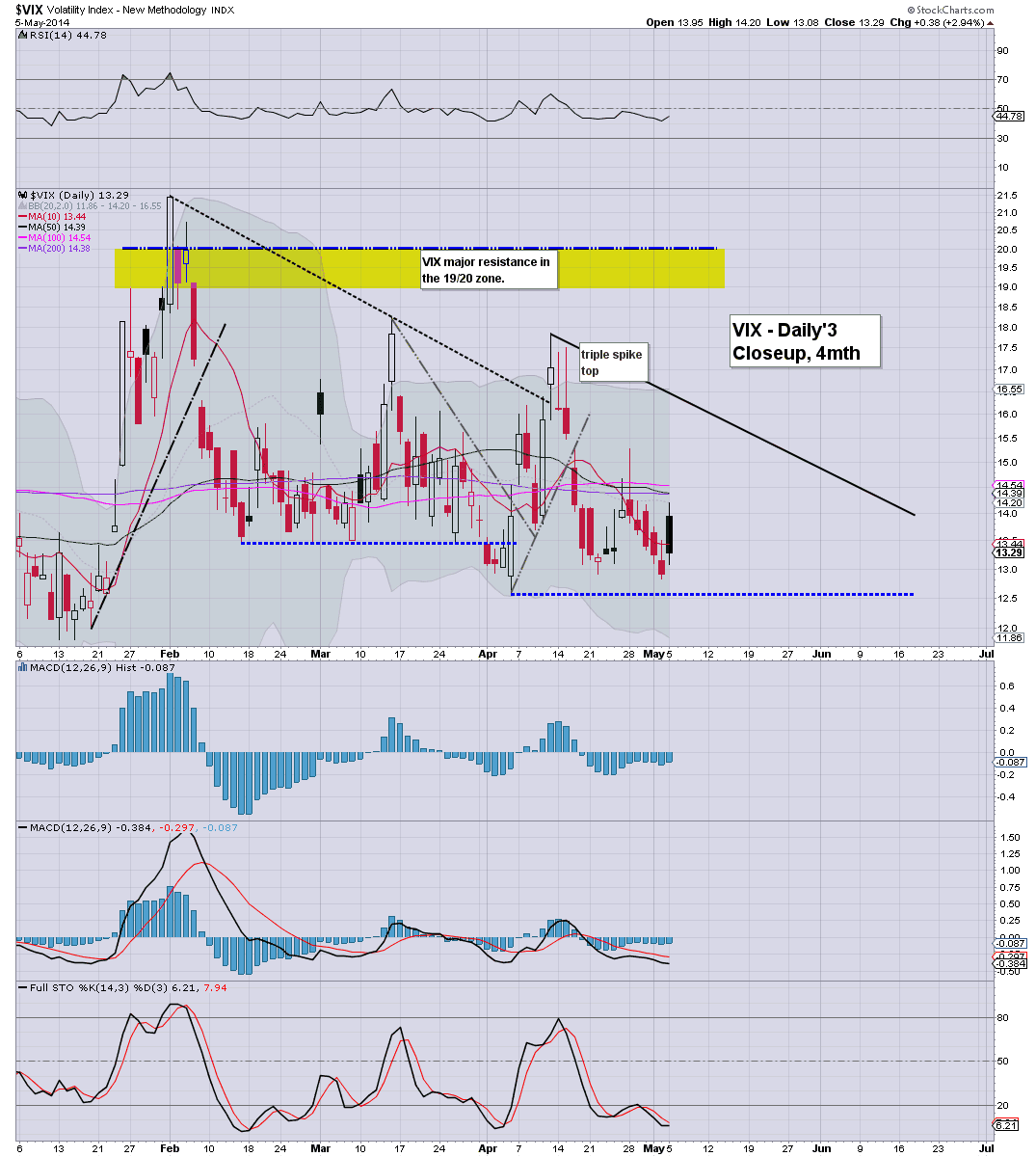 Suffice to say, another day where the opening black hourly candle on the VIX was a key warning to those on the short side.

Equities opened weak, but with the morning reversal holding, most indexes closed in a particularly bullish manner, sp +3pts @ 1884. The two leaders - Trans/R2K, settled -0.3% and -0.2% respectively. Near term outlook remains broadly bullish into the sp'1900s. 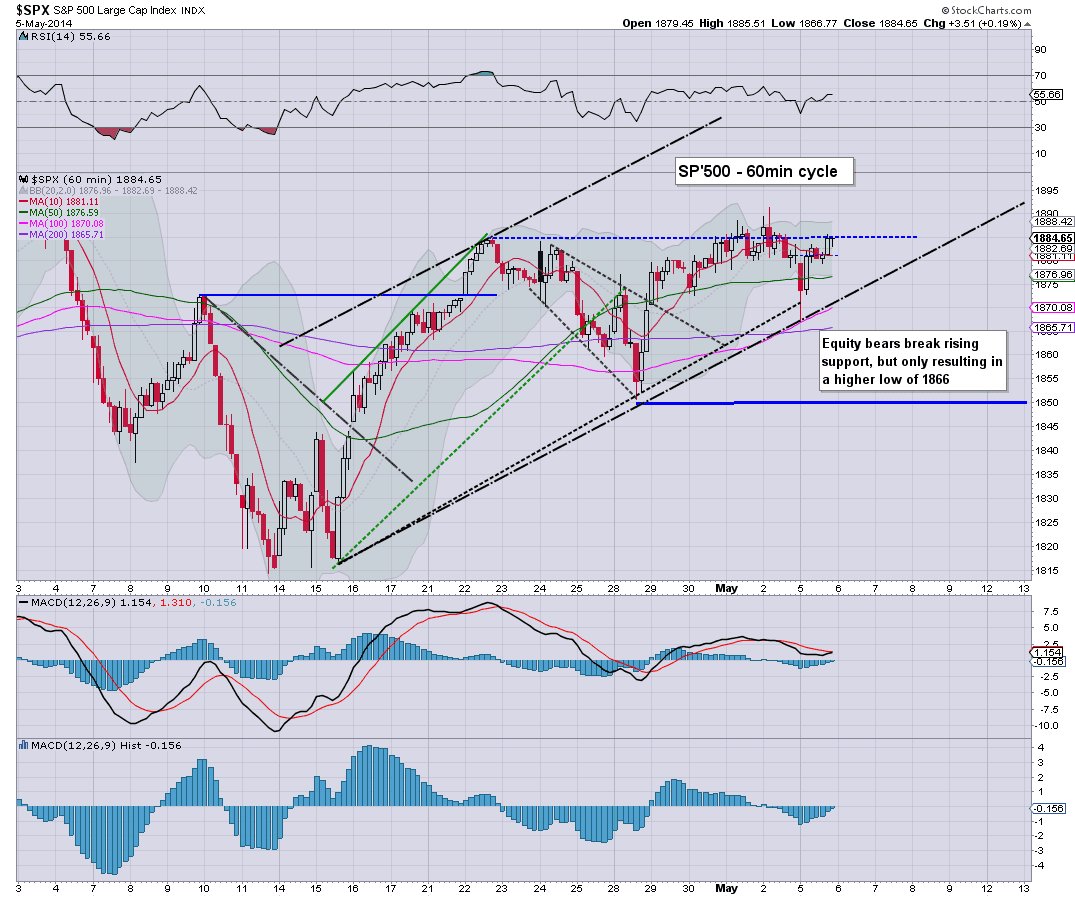 Yes, the Ukraine is a very valid concern, but the US market simply doesn't much care about it.
-
For now, the broader weekly/monthly trends remain to the upside, although yes...underlying price momentum is STILL weakening, and the equity bears do look set for a sig' wave lower..just not..quite.....yet.

For the equity bears, this is perhaps one of the most annoying starts to the week for the year so far. Not only do we have a clear spike-floor - on all daily index charts, but the market is well within range of breaking new historic highs on the Dow/SP/Trans within the next few days. 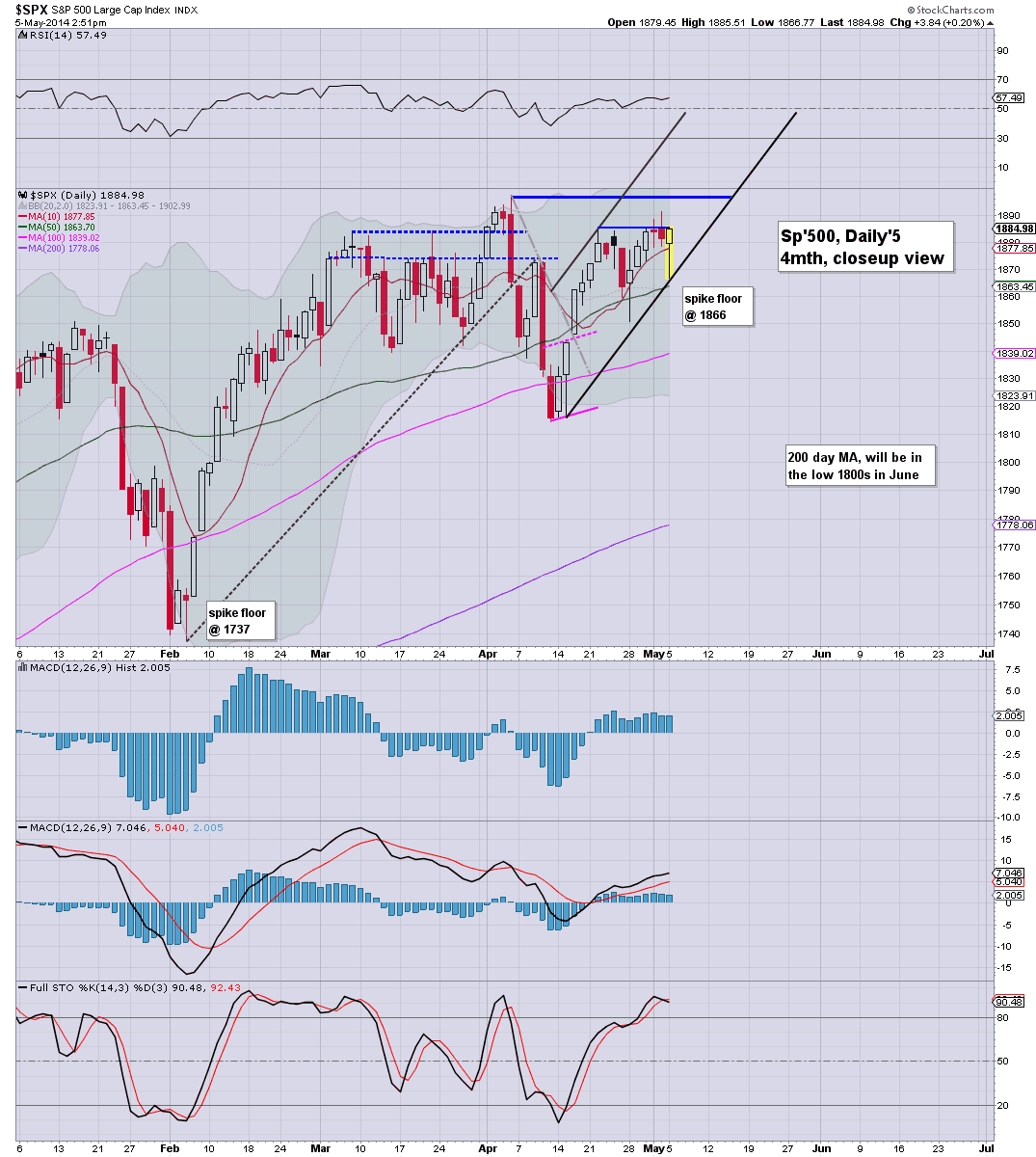 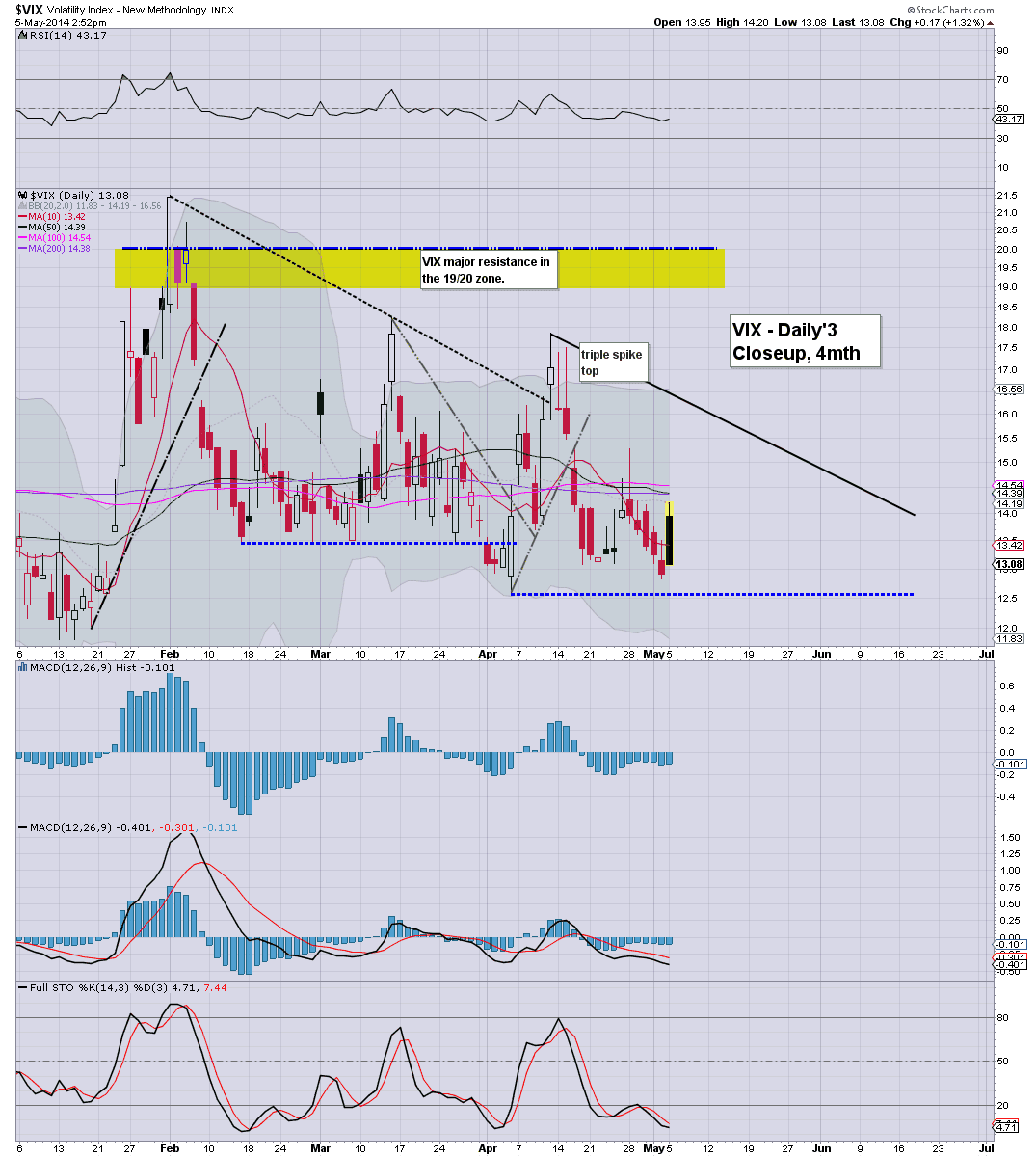 Frankly, the daily index candles are VERY bullish, and as ever..a spike-floor - along with a black-fail candle on the VIX..are never to be dismissed lightly.
-

I remain in a tiresome mood... but I am battling away....here

For the bears out there..the only issue of note this week is the Yellen..due Wed'.. AND Thursday. It won't take much happy talk from her to give the market the excuse to break new highs.
Posted by Trading Sunset at 19:53:00
Email ThisBlogThis!Share to TwitterShare to FacebookShare to Pinterest

More than anything, the daily candles are perhaps even more bullish than last Monday's spike-floor low of sp'1850. Now we have a higher low of 1866, and the market is in a relatively strong position to break into the 1900s later this week - on 'Yellen' comments. 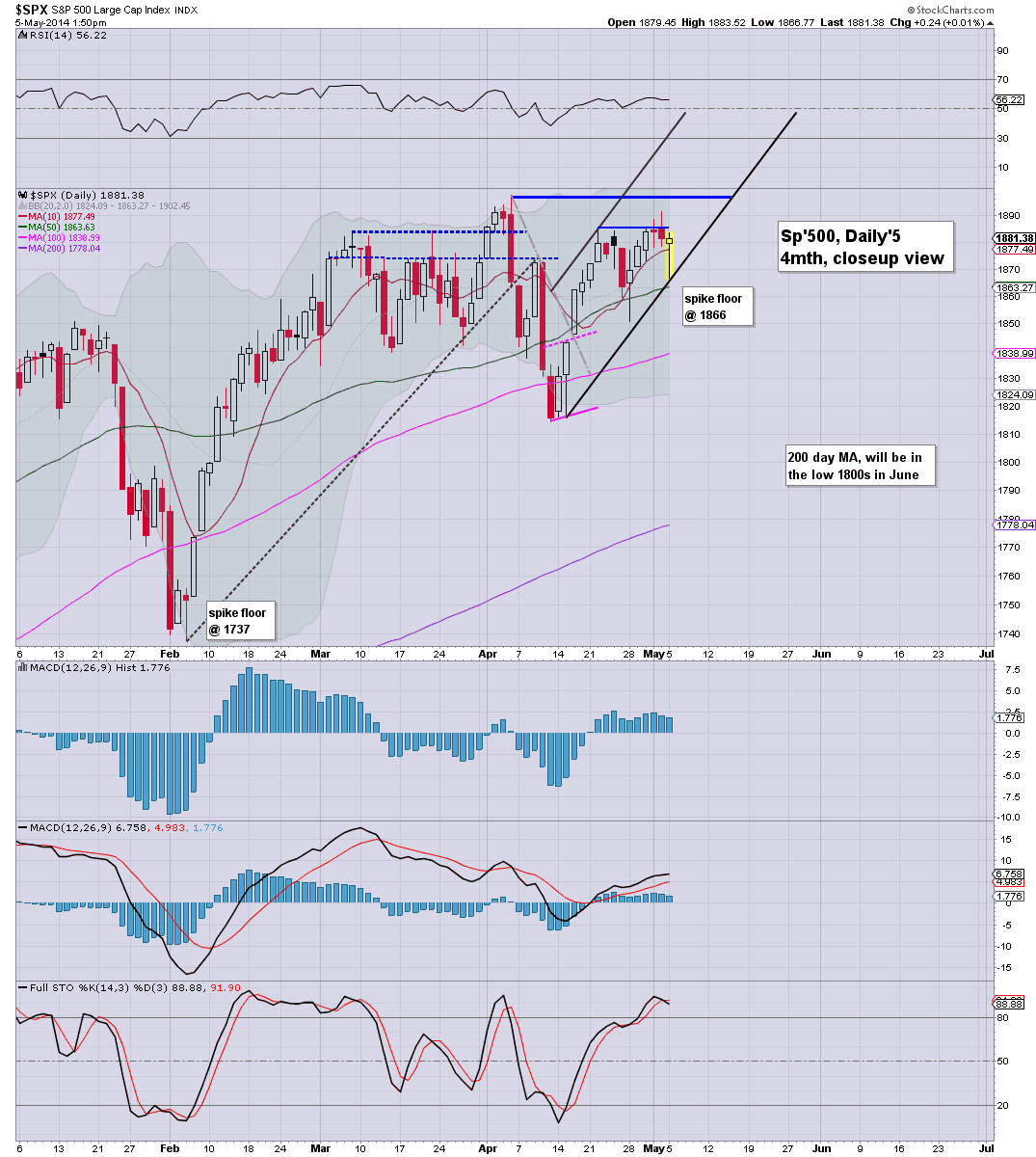 Little to add, on what is just another day of lunacy in the world's more twisted and rigged Casino.

Maybe Affleck should play here instead?
-

Equity bulls should be content with any amount of net daily gains. A close at the high of day would merely be a bonus.

*notable gainer.. AAPL, looking set to break into the $600s late today..or at least 'some time' this week.
Posted by Trading Sunset at 18:54:00
Email ThisBlogThis!Share to TwitterShare to FacebookShare to Pinterest

Equity indexes are holding the sp'1880s, and it is looking like a near exact replay of last Monday. Metals are below their opening gains, Gold +$11, Silver +0.7%, and the daily candle is suggestive of much lower prices as the week proceeds. 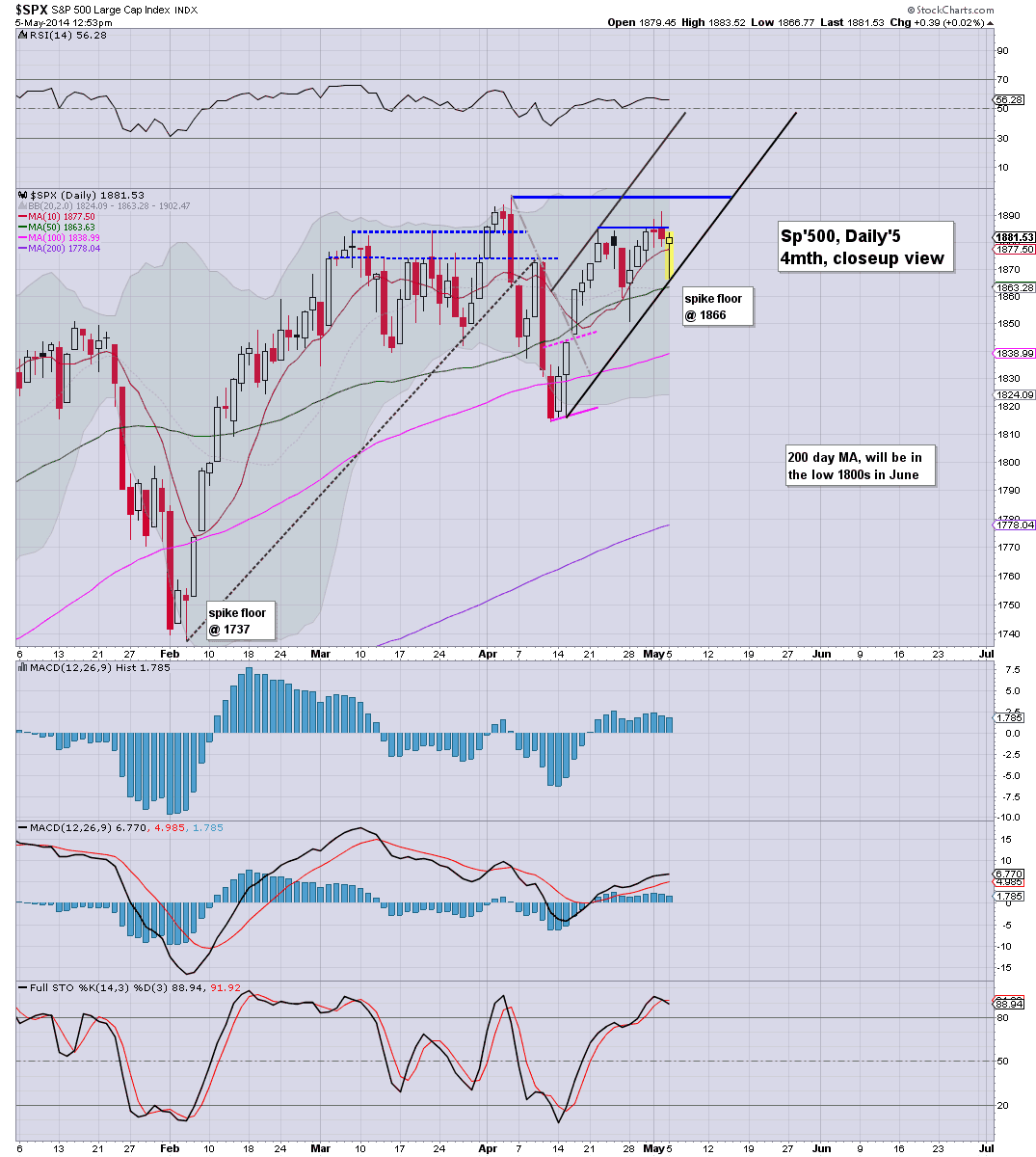 R2K/Nasdaq are still battling to break the overall down trends from March/April, but it won't take more than 1% higher to clarify things.
Posted by Trading Sunset at 17:58:00
Email ThisBlogThis!Share to TwitterShare to FacebookShare to Pinterest

The opening black-fail VIX candle was indeed another early warning that the equity bears are still lacking consistent downside power. Metals are cooling, Gold +$10. Equity bulls should be content with any marginally daily net gains. 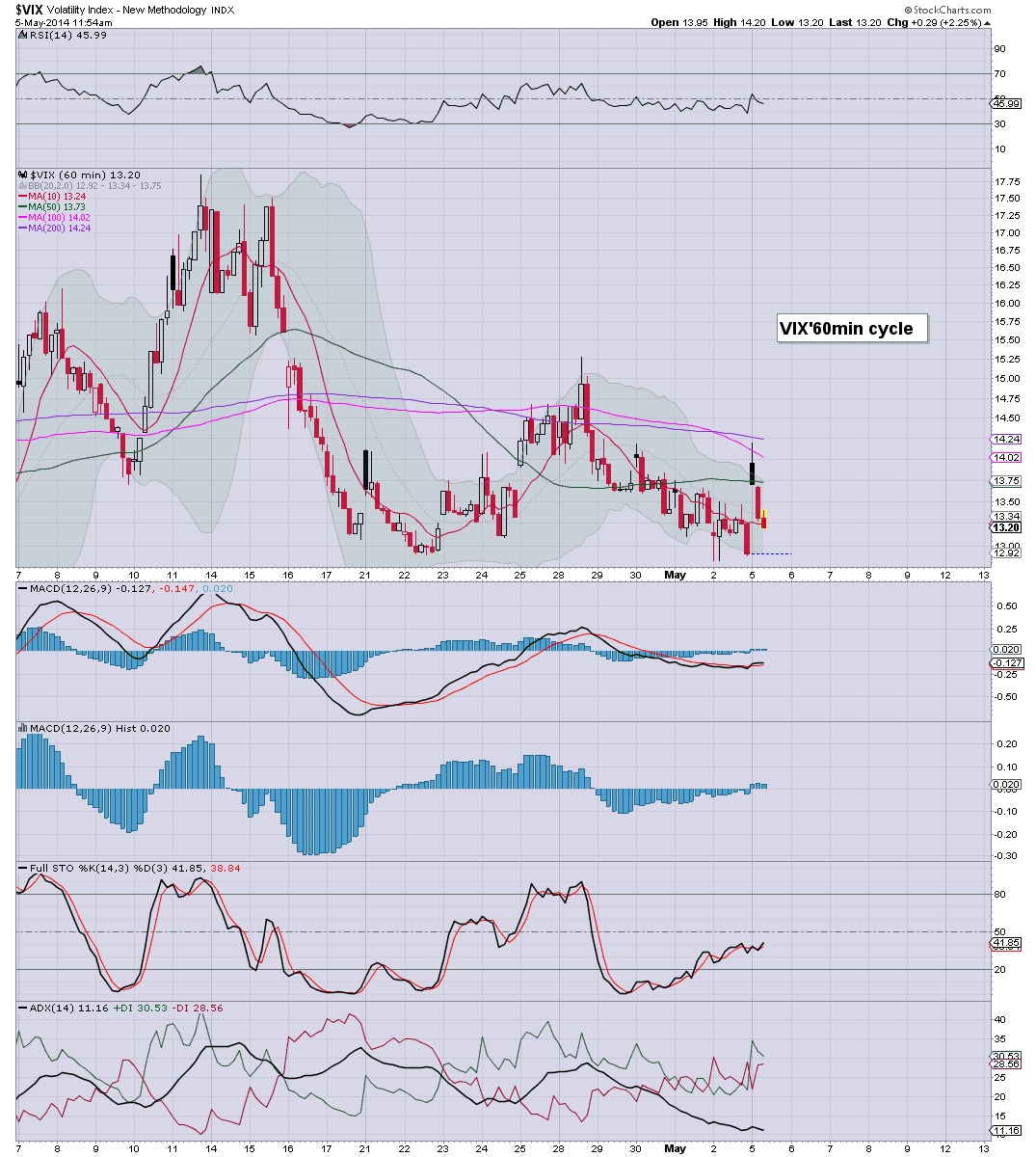 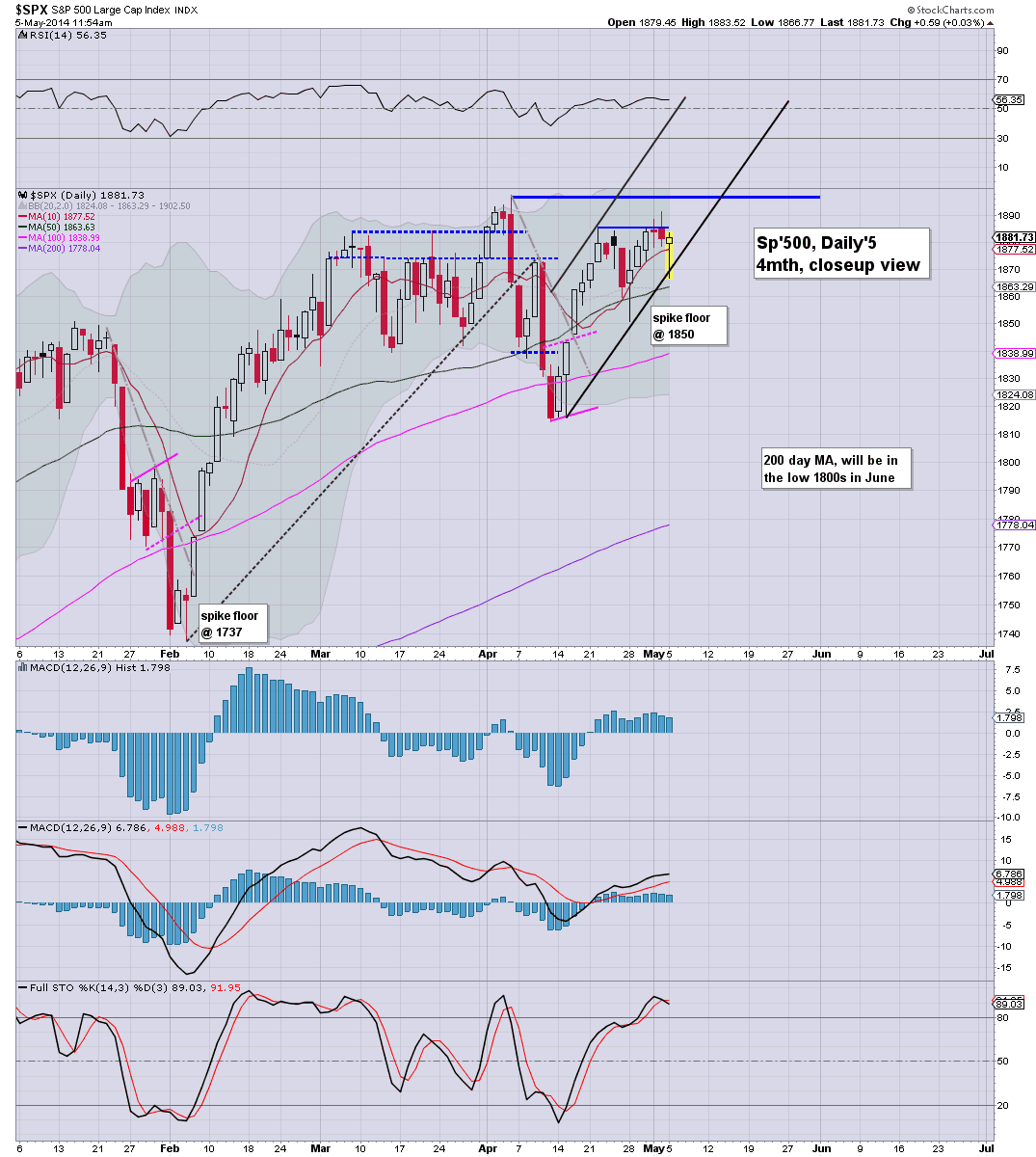 *no doubt, many bears are already in a lousy mood after the opening tease...
-

time to cook...
Posted by Trading Sunset at 16:56:00
Email ThisBlogThis!Share to TwitterShare to FacebookShare to Pinterest

10am update - the week begins with a break

Equity bears break rising support, and the door is open to an attempt on last Monday's spike floor of sp'1850. If the bulls can't hold there...its likely over, as many this past weekend have speculated. Metals are holding significant gains, Gold +$15. 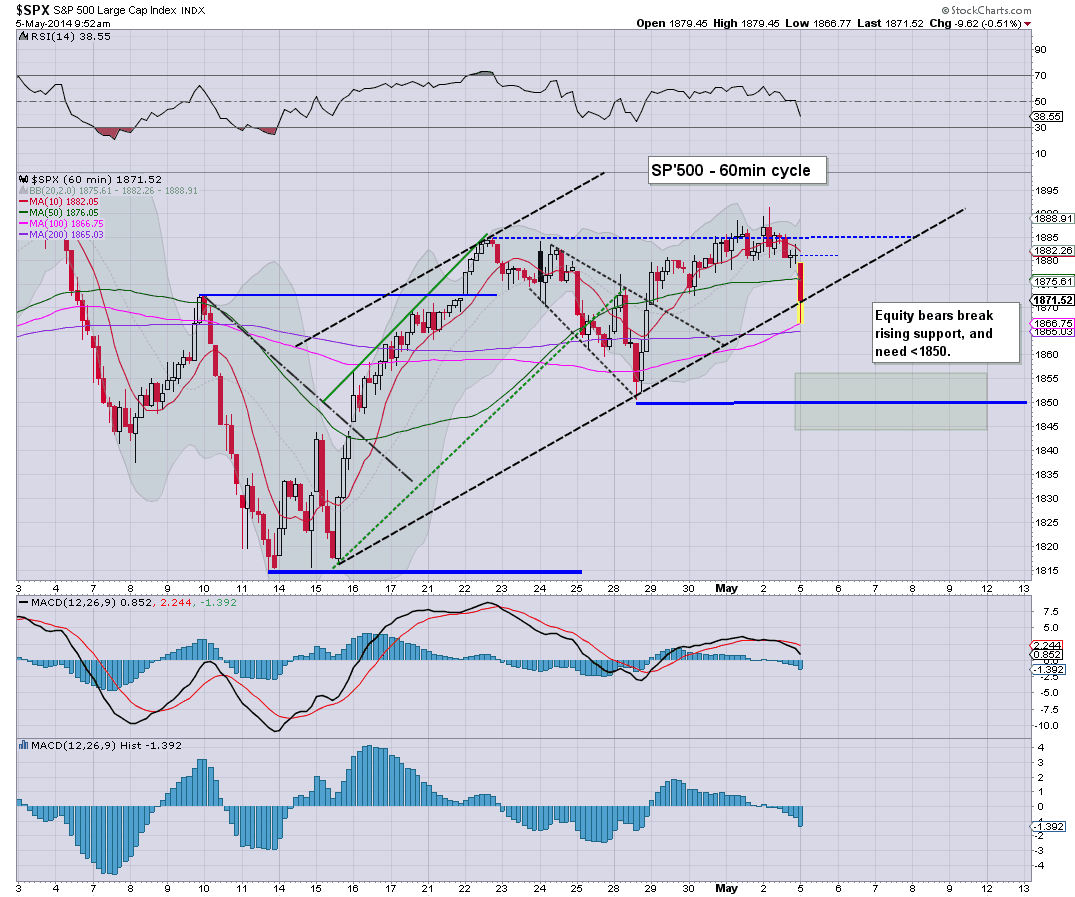 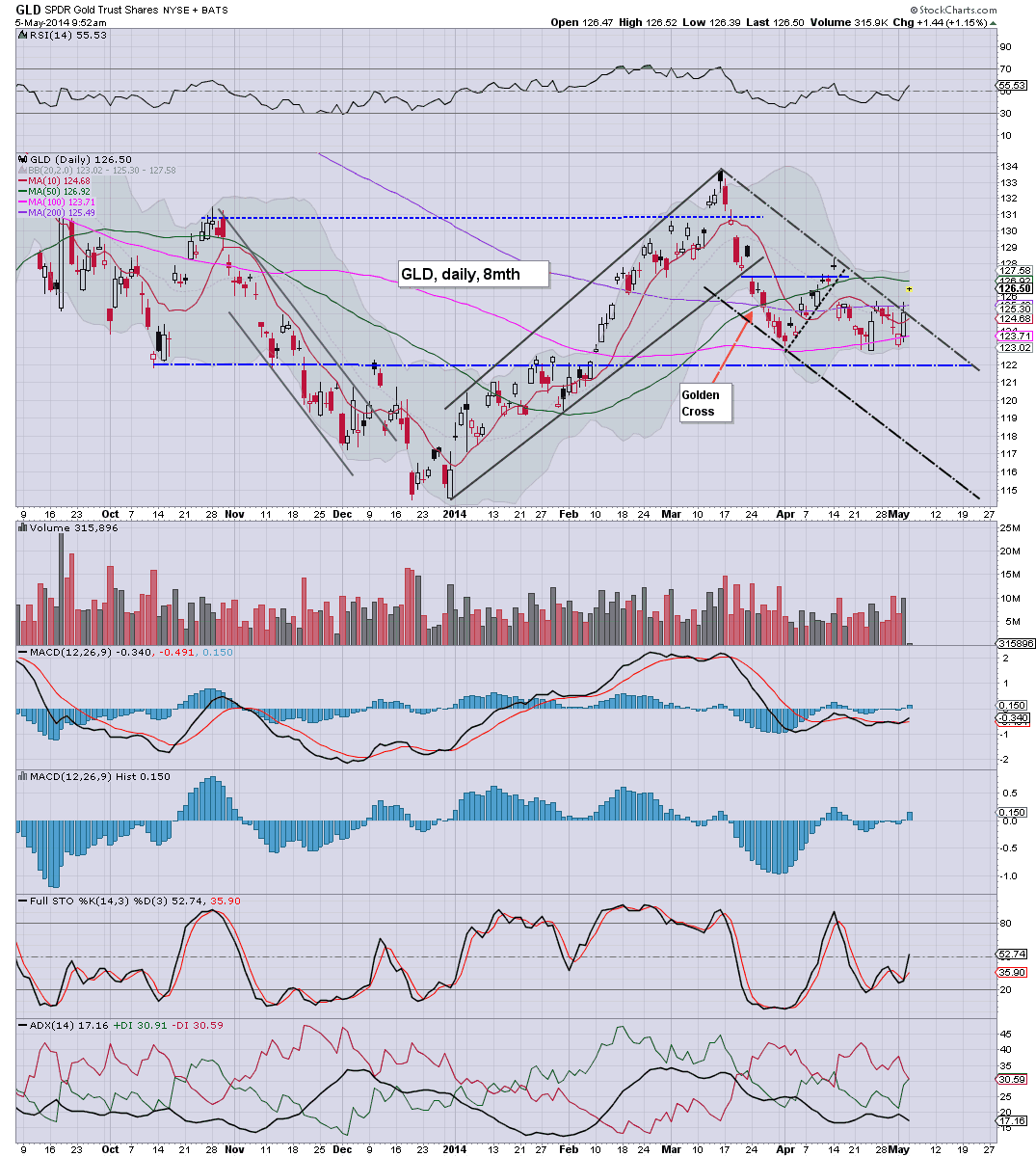 From how I see it, bulls need to hold sp'1850, or the bigger weekly cycles will be flashing 'oh noes' warnings for the rest of this week..and month.

Yellen is speaking later this week, and frankly, that seems the 'last hope' bulls have of turning this around.
--

Opening black-fail candle on the VIX 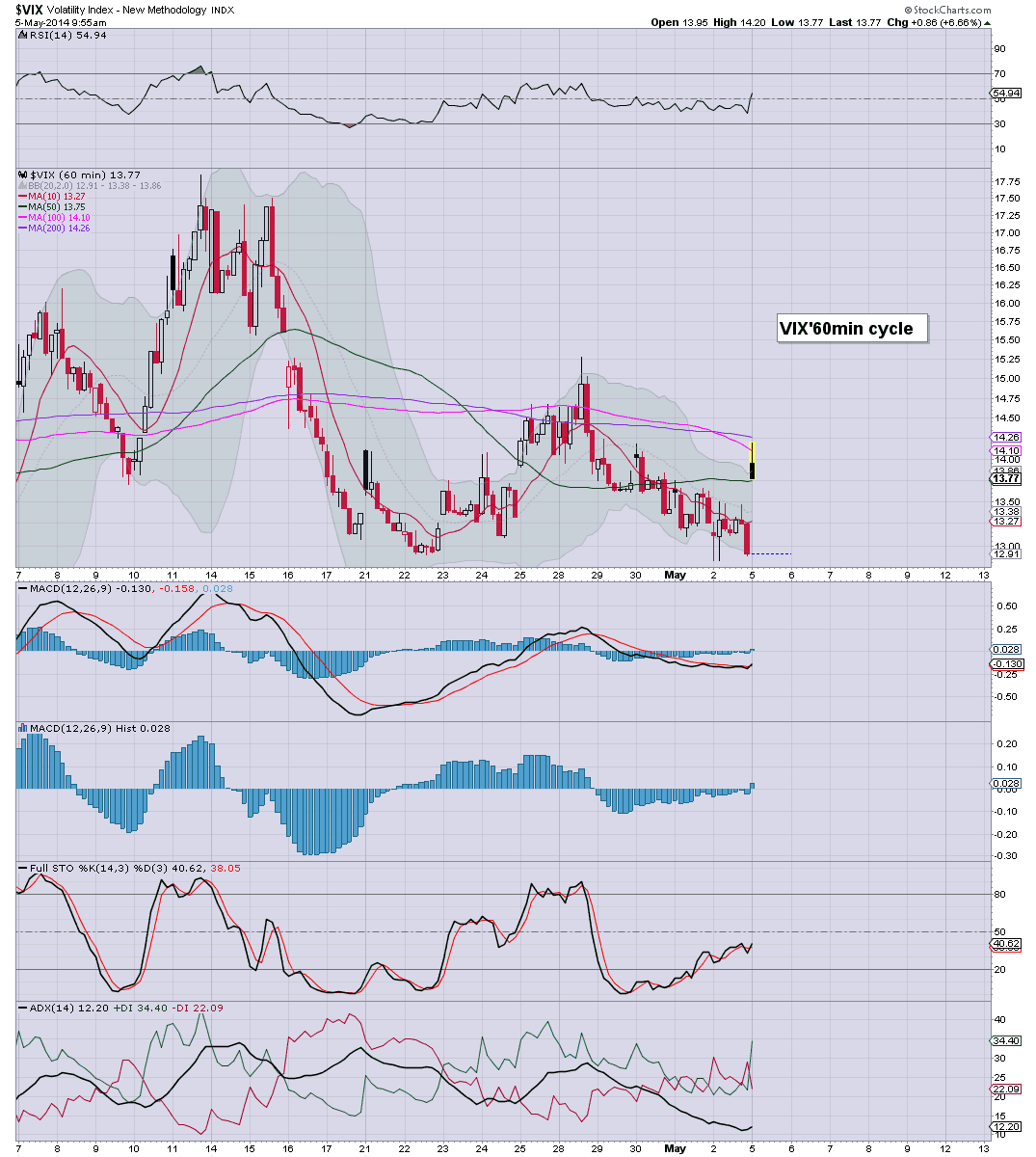 Well, make of that..what you will.
--
back 'some time later'.
Posted by Trading Sunset at 14:53:00
Email ThisBlogThis!Share to TwitterShare to FacebookShare to Pinterest

Good morning. Futures are moderately lower, sp -7pts, we're set to open around 1874. Metals are higher, Gold +$10, with Silver +0.8%. Equity bears need to break <sp'1850 to have any real hope that the broader up trend is breaking. As many recognise, a minor pull back to the 1875/60 zone would do nothing to break the broader up trend. Will today be much like last Monday?  Probably.
-

Have a good week!
Posted by Trading Sunset at 13:38:00
Email ThisBlogThis!Share to TwitterShare to FacebookShare to Pinterest

The broader weekly charts remain outright bullish, with the Dow/SP/Trans set to break new highs in the immediate term. Testimony from CEO of Print Central - Yellen, this coming week will likely be a key determinant for whether the market can break new highs. 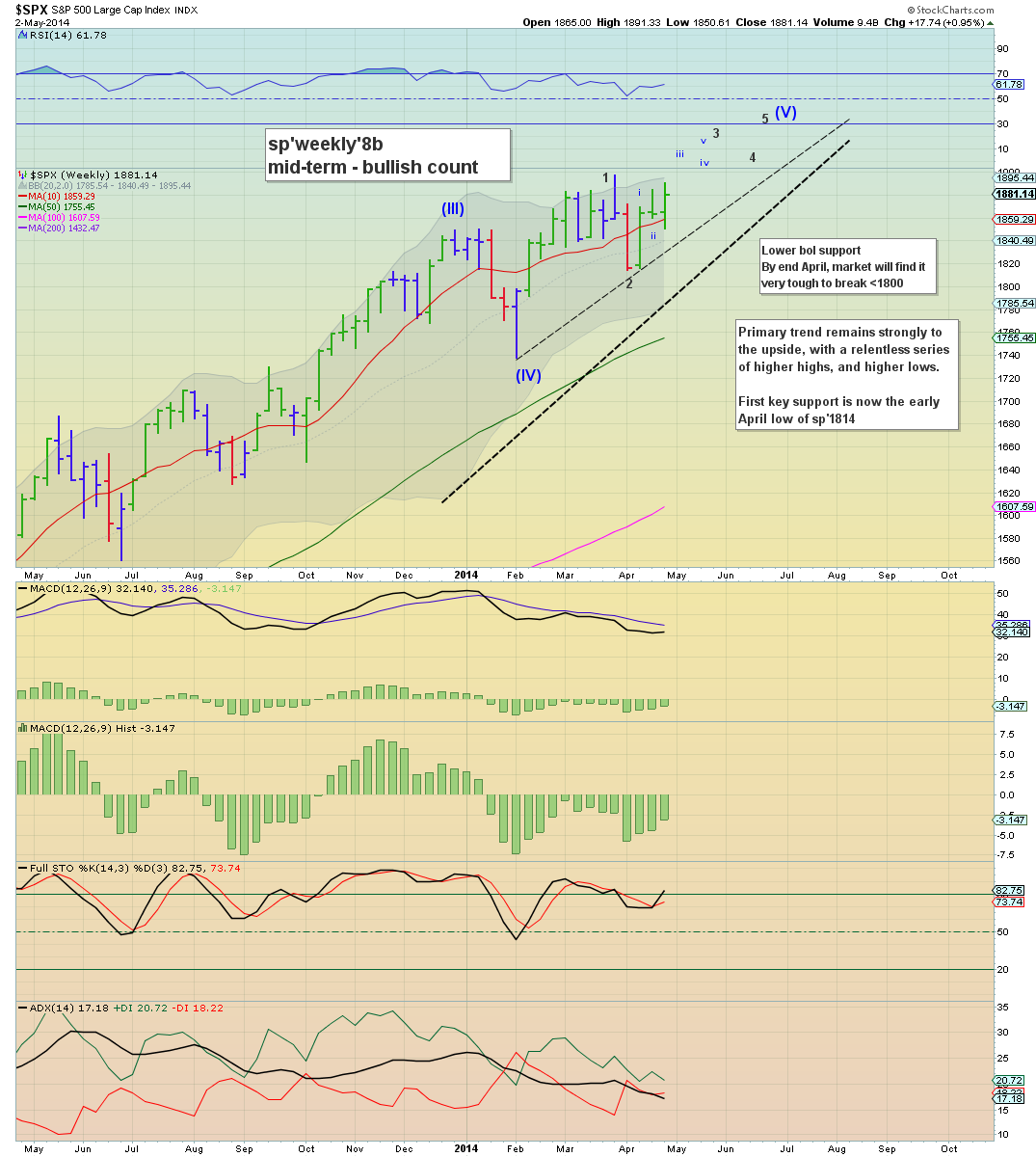 I've nothing else to add on the above chart, that I've not already said a thousand times in the past few weeks.
-

Anyway, the point of this bonus weekend post, is to highlight some videos that caught my attention...

I'm very much in agreement, in that the trend does offer the sp'1920s, if not the 1950s within the relatively near term (mid June at the latest).
--

Once again, Oscar is back on the bear train. He seems spooked by action in bonds..and in the DAX. Yet...the weekly charts ARE bullish, and I'm kinda bemused why he has again flipped bearish, despite there being no real support for that view.

Certainly, I'm also seeking a major 10%+ correction this summer, but not quite yet. Anyway, Mario at SMF is usually worth listening to, and even if he is early by a few weeks..it really makes no difference.
--


Bullish for another week

The fact we hit sp'1891 Friday morning should concern the bears. We're on the edge of breaking new highs on many indexes, and once that occurs, another 20/25pts would be easy to capture, perhaps a fair bit more.

Yours truly is somewhat twitchy, I'm awaiting earnings for two stocks this week...CHK and RIG. The market had better be pleased with both of those, or I'm going to have a somewhat annoying week.