US equity indexes climbed for the fourth consecutive week, with net weekly gains ranging from 3.0% (Nasdaq comp'), 2.1% (sp'500), to 0.3% (R2K). Near term outlook offers first chance of a retrace beginning with the next FOMC/GDP data, but any such retrace will likely be brief and not much below the sp'2K threshold. 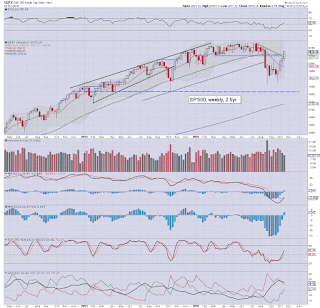 The fourth consecutive net weekly gain, with the sp +42pts (2.1%), with a new cycle high of 2077. The Friday close above the 200dma was a particularly bullish aspect.

Underlying MACD (blue bar histogram) has turned positive (as expected), and there are a viable 2-3 weeks of further upside before a retrace will become due.

Next upside target will be the 2100 threshold, and then the May high of 2134. With momentum as it is.. it would seem new historic highs are likely before year end.

As an aside, what will be even more important is whether the market can attain a monthly close above the 10MA (currently @ 2049). Of course, this does not necessarily have to be achieved in October, but certainly, before year end.
-- 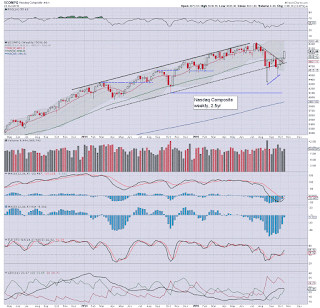 The tech' is leading the way, with a net weekly gain of 3.0%, back above the giant 5K threshold. Underlying MACD cycle is set to turn positive at next Monday's open. In theory, there is a viable 3-4 weeks of further upside. Next upside target is the July historic high of 5231.. a mere 4% higher, and that certainly appears likely before year end. 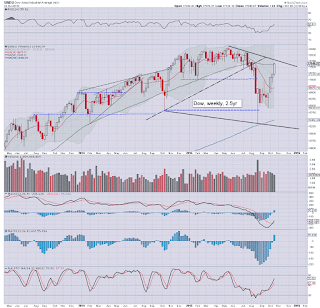 The mighty Dow gained another 430pts (2.5%), settling at 17646. Underlying MACD cycle is now positive, with next soft resistance at the 18k threshold. The May historic high of 18351 now looks within range before year end. 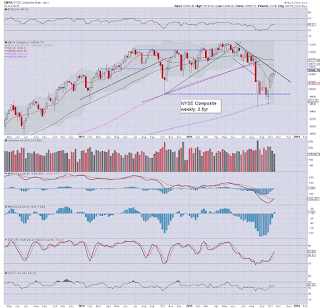 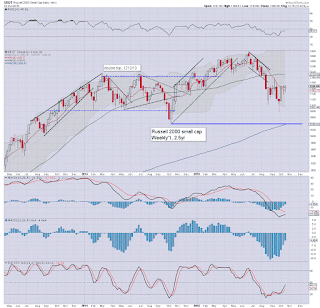 The second market leader was a laggard this week, gaining just 0.3% @ 1166. The weekly candle does sport a floor spike though, and this is bullish for next week.. with resistance at the 1200 threshold. At the current rate, it will be another two weeks before the MACD cycle turns positive. 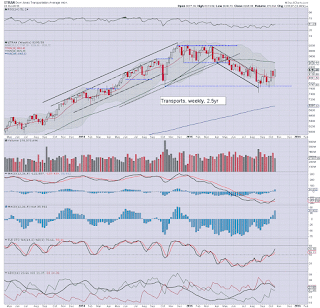 A fourth consecutive week to the upside... and the floor spikes seen in late Sept' were indeed a very important signal of looming upside.

Right now, it would seem most indexes have high potential for further upside next week. Using the Transports as a guide... if the 8500s are hit - 2/3% higher... that might equate to sp'2090/2100.. and then a retrace into November.

Next week will be pretty busy... not least with another FOMC, but more so.. first reading for Q3 GDP.

USD on the edge of a bullish breakout

Whilst equities saw very significant net weekly gains, it was a similarly bullish week for the USD, which saw a net weekly gain of 2.8%, settling @ DXY 97.21. Broader price structure is a giant bull flag, and by definition is offering a break above the key 100 threshold.. and then swiftly onward to the 120s. 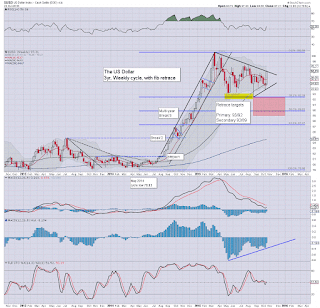 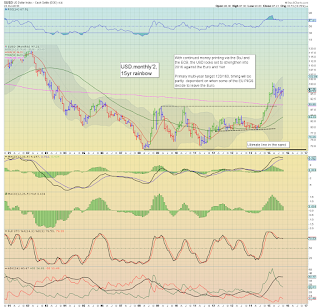 The implications for sustained action >DXY 100 should be clear to most... especially those involved in the precious metals and Oil.

US equities closed significantly higher for the second consecutive day, sp +22pts @ 2075 (intra high 2079). The two leaders - Trans/R2K, settled higher by 0.7% and 0.9% respectively. Near term outlook is for further upside into the next FOMC of Oct'28th, before next opportunity of an equity retrace. 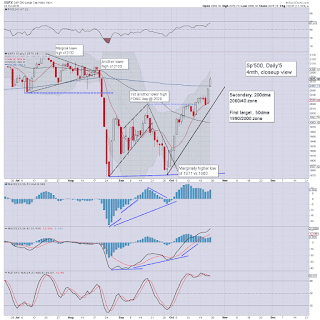 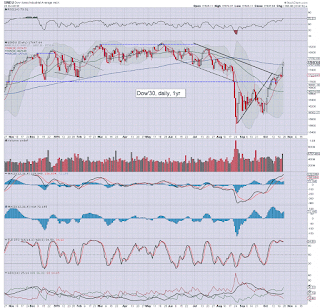 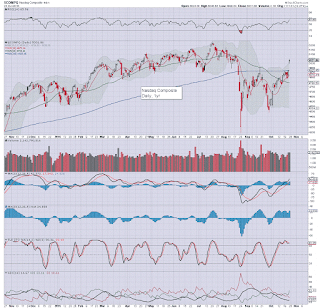 The sp'500, Dow, and Nasdaq, have all seen rather decisive weekly closes above the 200dma... which is unquestionably, a particularly bullish technical signal.
--