With the main indexes opening moderately higher, and continuing to battle upward across the day, the VIX naturally slipped back again, closing -6.5% @ 13.72  There is still some underlying upward pressure on the VIX, but even the lowly 16s still seem light years away. 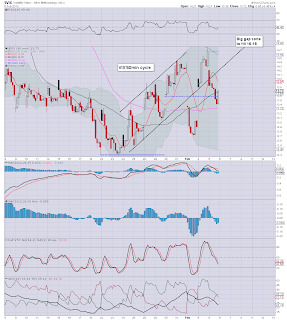 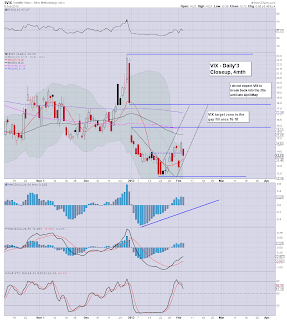 The one 'very minor' discrepancy of today which a few might have noticed was the VIX.

Since today's index gains effectively almost exactly negated yesterdays declines, we can very reasonably compare the movement in the VIX.

Whilst the indexes clawed back ALL the declines, the VIX still held onto around 5% of yesterdays gains. I suppose that amount might only merit as 'noise', but still its perhaps something to recognise.


The problem the bears now have is that we are right back to square one though.

Frankly, even if the market dropped dow 250pts tomorrow, such declines can't be trusted. The question would then be, would the VIX even manage to break into the 16s?

It remains largely a fearless market...driven on mainstream 'everything is going to be okay' hysteria that has now endured for almost four years.

A very contrasting day to Monday. Despite an apparent lack of 'excuses', the market has exceeded the recent index highs. All those seeking some degree of retracement lower are right back to the starting line again. There is still no power on the bearish side. 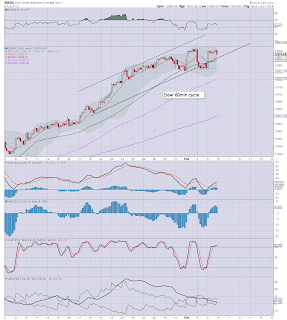 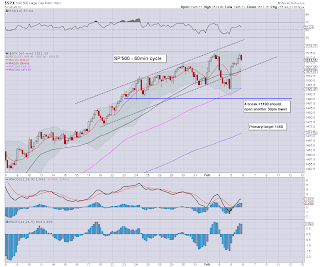 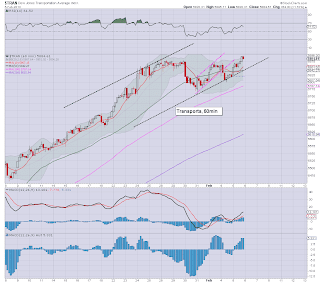 It will be particularly interesting to trawl the financial news/blogs this evening. Yesterday we saw a fair bit of bearish hysteria - after what were just 'moderate' declines of barely 1%.

As has been the case since mid January, even a retracement down to the 1450s will do absolutely no damage to the mid..or long term bullish trends.
--

I will merely note that I find it strange so few are extrapolating forward.

After all, whats hard about that to at least...'consider' ?

...and its this lack of consideration for what might be the biggest rally in market history that I find surprising. I find it even more surprising than the delusion 'everything is fine with the economy' that is inherent in the cheer leading maniacs on clown finance TV.
Posted by Trading Sunset at 21:01:00
Email ThisBlogThis!Share to TwitterShare to FacebookShare to Pinterest

Today's price action has to be seen as utterly hillarious from the bullish perspective. There is no real news out there, it is merely the underlying strength being seen today. With the market now taking out the recent highs, normal service has indeed resumed 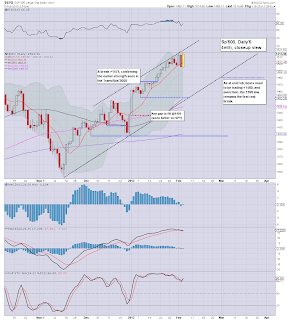 What is there to say, other than congratulations to all those dip buyers!

Its worked since spring 2009, and its STILL working.
-

What remains laughable is the notion that it will end, whilst the Fed is throwing 45bn to the primary dealers each month, and whilst those HFT algo-bots remain plugged in.

Until those two issues change..the primary trend will remain the same.

It really IS that simple.
--

Or you could still believe in the 'wedge of doom'.
Posted by Trading Sunset at 19:53:00
Email ThisBlogThis!Share to TwitterShare to FacebookShare to Pinterest

Yet again, the bulls have the right to laugh themselves silly. Bears can't even string together two moderate daily declines in a row, but then..what else is new? Dollar is now a touch red after earlier gains, with the VIX -6% 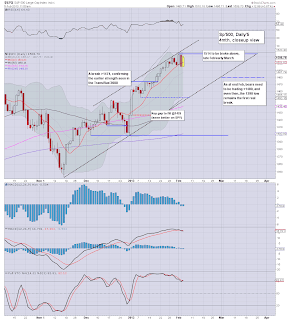 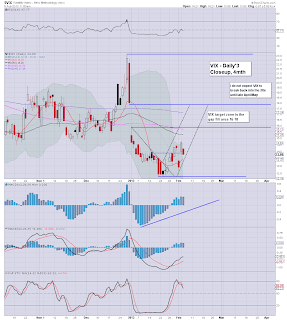 If these levels of gains hold, then it will be yet another total shameful embarrassment for the bears. Its still viable we rollover, but really..its going to difficult just to close flat.
-- 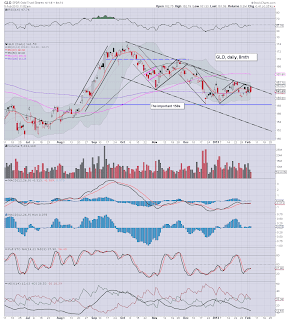 back later
Posted by Trading Sunset at 16:53:00
Email ThisBlogThis!Share to TwitterShare to FacebookShare to Pinterest

Another lousy morning so far. Yesterday's declines almost entirely negated, and its not even lunchtime. The underlying strength of this market..yet again showing itself. VIX is -5%, so far, its not a smack down, but...it sure ain't higher. 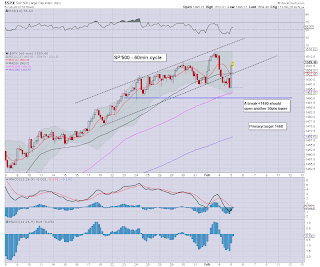 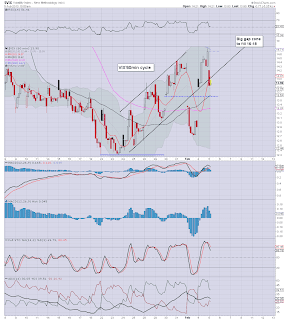 So much for all the bearish 'giant wedge of doom' hysteria talk that is still out there.Just what the hell are these people going to say when we're trading at sp'1550, 70, and in the 1600s?

Ohh, I'm guessing they'll still be touting a wedge then too.
--

Bears face the 24/7 threat of POMO, HFT algo-bots..and a media that will be cheer leading this market for years..regardless of the reality.
-


Posted by Trading Sunset at 15:52:00
Email ThisBlogThis!Share to TwitterShare to FacebookShare to Pinterest

Good morning. The market opens moderately higher, and we're back in the sp'1500s. I'm guessing this rally won't hold long though, and we'll close at least moderately red. The dollar is noticeably higher for a second day, although the metals are seeing slight gains. 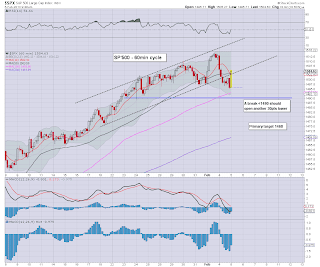 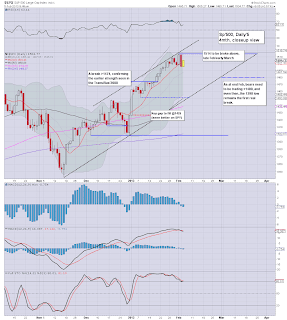 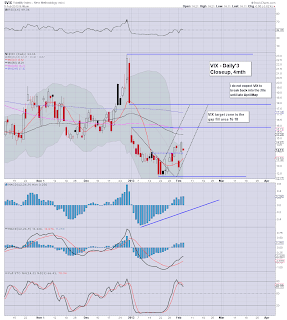 It had better, or the bears face the humiliation once again of seeing a 1 or 2 day pull back..only to result in the rally restarting yet again.

Give it a few hours to fail.

Bears dearly need a close in the sp'1480s, with VIX in the 15s.
Posted by Trading Sunset at 14:50:00
Email ThisBlogThis!Share to TwitterShare to FacebookShare to Pinterest

Its just another tease

With the market starting the week with the biggest daily declines since Dec'28th, a little bearish hysteria is returning. After all, the top is in now, right? We've been here so many times though, not least a mere five weeks ago. Oh how quickly the bears forget. 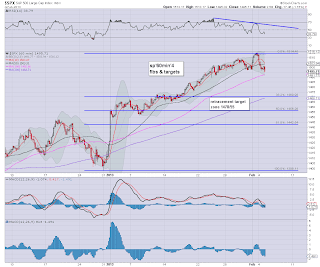 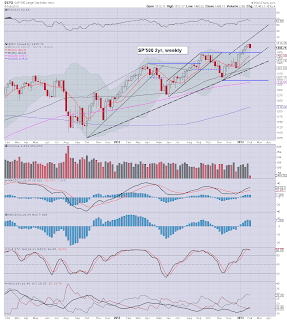 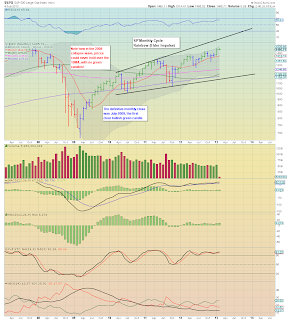 The fib' levels offer a possible floor, somewhere in the 1470/55 zone. The daily chart would also be strongly suggestive that we won't go below the 1450s. 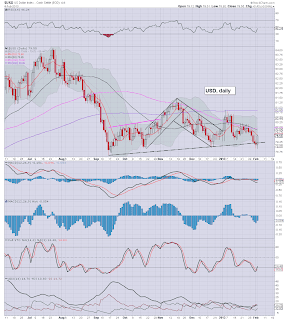 I have to think that the bears will be lucky just to see the 1460s in this down cycle. There will be a LOT of people who missed the ramp from 1398>1514, who are no doubt looking to get on board this POMO fuelled freight train.

I am short...and indeed looking for an exit later this week (preferably with VIX 17/18) and then look to go heavy long into the spring. A very valid target will be a trade from sp'1460, with an exit around 1550/70 by early April.

The main market closed moderately lower, with the largest closing declines since Friday Dec'28th. Despite the near 1% declines, we remain within the accelerated up trends, and all those touting a major top are likely to be proved grossly wrong once we move into March. The primary trend remains powerfully higher. 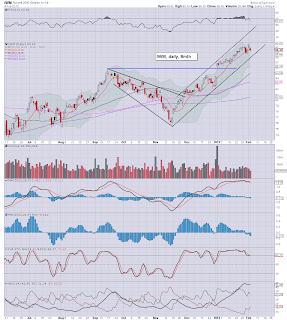 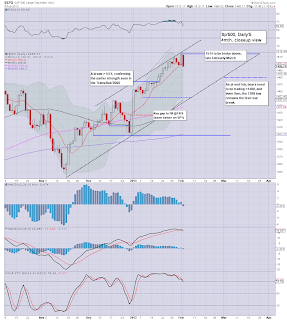 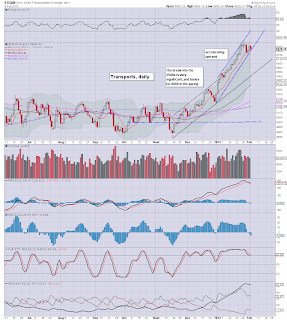 What is especially bad for the bears is that the closer we get to the 1450s there is massive potential for an intra-day swing, putting in a floor, and before you know it, we'll have seen a 2-3% reversal day.

All declines are to be dismissed as entirely unreliable.