September saw the broader market climb a further 2-3%. The anomaly was the 'old leader', the transports slipped a little over 2% lower, closing below the big 5000 level.

Lets take a grand overview of the six main US indexes... 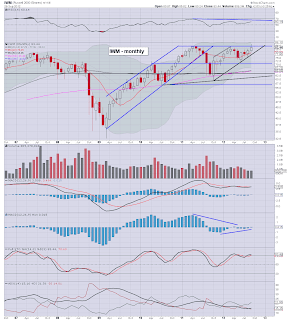 A brief spike to new all time highs for the Rus'2000 small cap.. truly incredible. However, we have some real messy divergences on the underlying MACD (blue bar histogram) cycle. It is very difficult to make any assertions about what remains the most volatile index.

The doomer bears should be seeking a break of the big 80.0 on IWM, and an eventual monthly close <70. Right now, the latter seems extraordinarily unlikely any time soon. 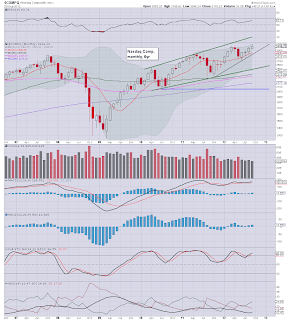 The tech' sector is largely continuing its relentless climb. The big 3000 level is now a key support level, and it sure won't be easy to get a monthly close under it. So long as AAPL can post 'in-line' earnings this October, the Nasdaq should be able to comfortably hold over 3k. 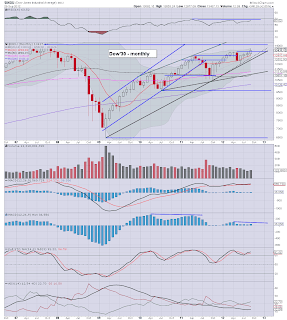 The break to new post 2009 highs, is clearly yet more pain for the bears. Just getting a close below the monthly 10MA of 13k is going to be a real tough task for the bears in October.

Bears really need a break under Dow 12500, until then, the trend remains very much upward. The 'crash' floor would be a very natural 11000, which is around 17% lower from current levels. 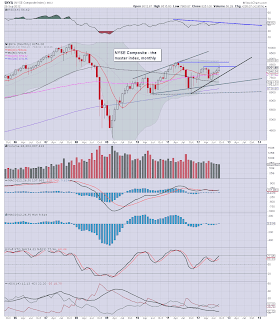 The master index - despite a mid-September surge higher, is still failing to break the May'2011 highs. This should still be one concern for the bull maniacs out there. Yet, only with a break below 7500 could the bears get justifiably excited about a major trend change. 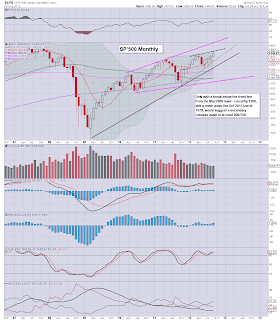 The announcement of QE3 sent the SP' briefly spiking to 1474, but after two trading weeks, the bulls are so far unable to break higher. There is huge support though at the recent cycle low of 1397, and even if that failed, there is massive support around the 1350/1300 zone.

The 'doomer crash floor' would be a very natural 1200/1150. Such lowly levels seem very distant though, and it will take some major market upset just to break back into the lower 1300s. 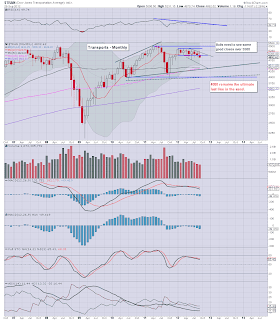 For the first time since Dec'2011, the transports closed the month <5000. That is now a confirmed red warning flag in my opinion. In a way, it is very logical for the first index warning to come from the 'old leader'.

With September being yet another upward month, the bears are without question still fighting against a steam train. However, of the six indexes I regularly cover, we do have one train carriage that has broken away, and is now slipping lower. The transports is warning of underlying macro-economic trouble. Whether you hold to a primarily bullish or bearish outlook, the weakness in the transports index is not to be dismissed lightly.

Clearly, the primary trend for the broader market remains UP.

The bears should look for further declines in the transports this October, with a lower low, and they should also look for weakness to start appearing in at least a few of the other indexes.

Back on Monday :)
Posted by Trading Sunset at 23:00:00
Email ThisBlogThis!Share to TwitterShare to FacebookShare to Pinterest

With September now almost over, its time to reflect on what is ahead in the remaining 3 months of 2012. 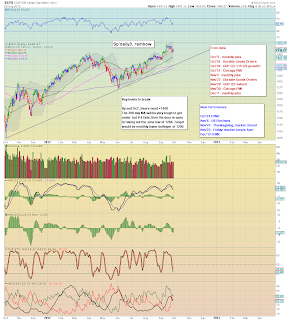 Only with a break below sp'1400 - as at end October, would an initial sign of trouble be apparent.
--

With both GDP and the Chicago PMI both warning of a serious risk of a US recession for the now elapsing Q3, and most definitely for Q4, I am going to keep highlighting these two data points in the months to come.

The good thing, and it IS a good thing - even for the doomer bears out there, with QE3 announced, that great unknown is no longer part of the puzzle. We can focus much more on underlying fundamentals and market price action.

Earnings season is just over a week away, and once again Mr Market is going to have to cope with many companies probably reducing their outlooks for 2013, and highlight their 'serious concerns' about what happens to consumer demand if the US congress does not delay the tax rises/spending cuts.

Right now, I'm assuming his highness, Obama wins a second term. In which case, the republicans - (understandably) sore losers, will refuse to compromise. We only have a post-election 4 week window in which to agree something, and I'm guessing they won't be able to.

The one wild card is if the capital markets get upset at this 'fiscal cliff' terror, and we see a brief - but sharp 15/20% drop late November/early December, and then the US congress quickly rush through an agreement to delay the changes until 2014/15 - much in the style of TARP, September 2008

The market is never one for embracing uncertainty, and we are fast approaching a cliff, which was designed by congress itself. So, its rather ironic that both democrats and republicans are seemingly terrified of what they themselves crafted.
--
Later today, the monthly index cycle update!
Posted by Trading Sunset at 19:01:00
Email ThisBlogThis!Share to TwitterShare to FacebookShare to Pinterest

One Sunday in the future we're going to get a real big surprise from the European side of the Atlantic. Whether its a Greek exit, one of the other PIIGS, or even the more exciting Germany 'we're leaving', its just a matter of when. Regardless, we're currently seeing a moderate pullback in the Euro. 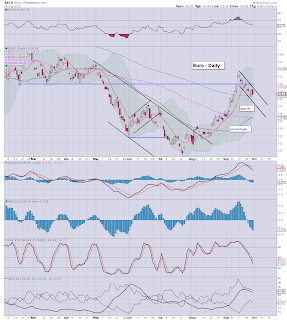 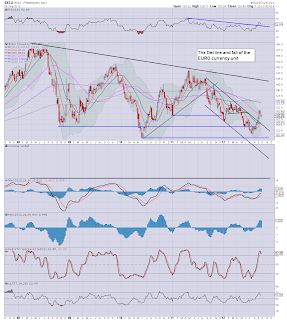 With the break above 1.26 a few weeks ago, the Euro has broken the long standing upper descending channel, that goes all the way back to spring 2011, when the Euro was 1.47

We have a few obvious gaps to the downside in the coming days, 1.27 and 1.24. The latter seems unlikely to be hit in the very near term.

What seems clear is that the Euro is a much dirtier piece of paper compared to the Dollar, which is without question still King in fiat land.

Long term Euro trend still appears likely downward, one Sunday night though, it could all change literally overnight. If one of the PIIGS leaves, the Euro would probably be stronger. What is probably one of the ultimate black swans....a German exit. Right now that seems impossible whilst Merkel is in command, but she won't be there forever.
--

*across the weekend, the important monthly cycle update. Have a good weekend

After yesterdays madness, the broader market closed moderately lower today by around 0.5%. Certainly, only part of Thursdays gains were taken back by the bears, and there remain what could still are probably bull flags on many of the indexes. 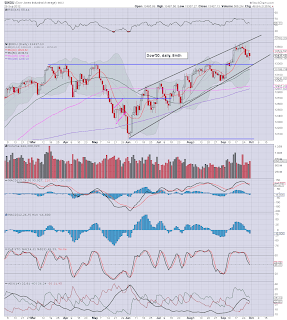 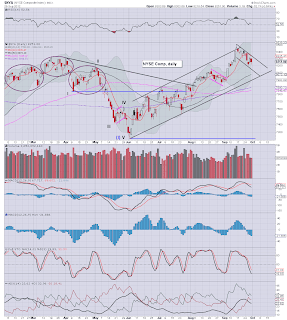 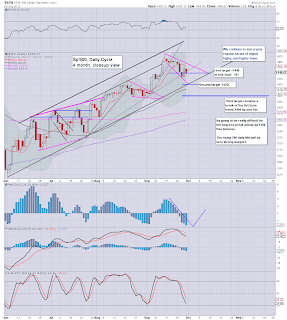 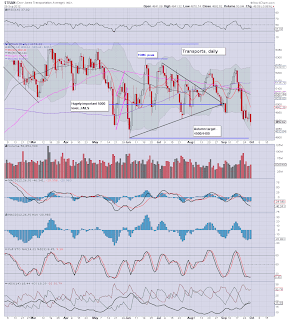 Today's moderate declines offer some renewed hope that the original 1420 target can still be hit.

Considering the MACD (blue bar histogram) cycle, we are now very low, and 1420 looks a very likely near term floor. It would be surprising if somehow we can punch through the recent important 1397 low, before at least one further up cycle.

The doomer bears need to see an overnight gap through the 1420 level, otherwise, I just can't see it in this cycle.

The one particularly bearish aspect to close the week and month was the transports, with a monthly close below the key 5000 level for the first time since December 2011. The 'old leader' is warning of trouble for October, and this warning is not to be dismissed lightly.