With the main indexes relentlessly climbing, the VIX continues to naturally melt lower, settling -4.75% @ 13.84 - the lowest daily close since mid August.  Next support is the 13.50/00 zone, although if sp'1700s, VIX 12s look very viable early next week. 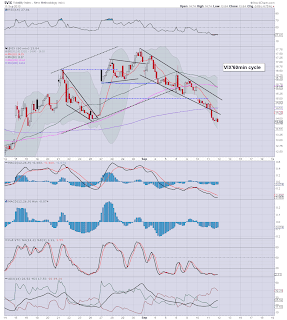 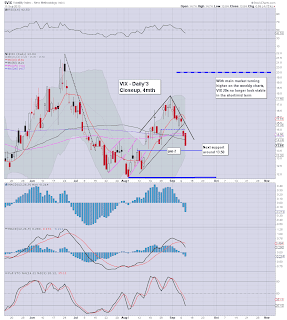 Perhaps even more so than the equity indexes, the VIX is telling the story.

The US markets are back into utter complacency mode, the only issue is whether this is the start of another giant multi-week/month ramp into the autumn..and perhaps even into spring 2014.
--

If the market can cope with QE-taper next Wednesday (if there is any)..then there really is no reason why equities will not just keep battling higher...with a VIX sub-teens.

I think bears had their chance in the past few days...and failed.
-

more later..on those relentlessly strong indexes
Posted by Trading Sunset at 23:00:00
Email ThisBlogThis!Share to TwitterShare to FacebookShare to Pinterest

The main indexes all closed moderately higher, with the sp +5pts @ 1689. The Dow managed more significant gains of around 135pts (0.9%). The near term trend remains to the upside, and a weekly close in the 1690/1700s looks very viable. VIX..naturally melted lower. 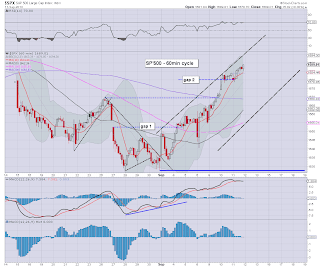 ..and the market rallies into the close.  sigh.
-

I can only note, as a 'permabear', I sure don't see any downside in the immediate term. Worse, I very much am guessing the market will rally on the FOMC.

Those weekly charts should scare the hell out of anyone still short. More on that later.
--

yours...on the sidelines....urghh
Posted by Trading Sunset at 21:01:00
Email ThisBlogThis!Share to TwitterShare to FacebookShare to Pinterest

The market remains pretty subdued, but then, that merely makes it even easier for the algo-bots to melt things higher. Whether the market closes in the 1680s..or 90s seems no longer important. The market appears in outright bullish mode..a 100% fearless one. 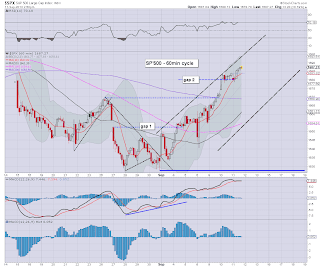 Perhaps I should quit looking at the hourly charts as much, but we're consistently holding the 1680s..and even the 90s look viable for today's close.

Price action is back to the old style of multi-week/month melt. 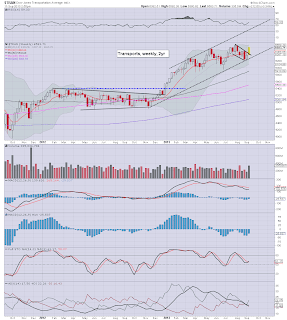 Just look the tranny, nothing bearish there anymore. First target are the 6600s, and then the big 7000 level.  That might equate to sp'1740/60s by late October.
Posted by Trading Sunset at 19:56:00
Email ThisBlogThis!Share to TwitterShare to FacebookShare to Pinterest

The market has slipped into a full on algo-bot driven melt mode. A close in the sp'1690s is now a very valid possibility today. Market volatility has collapsed, with the VIX melting lower into the 13s. If sp'1700s, then VIX 12s look likely next week. 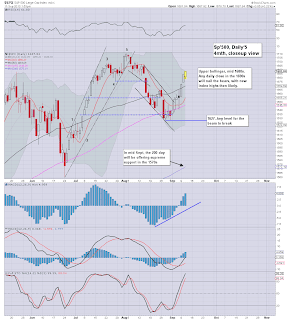 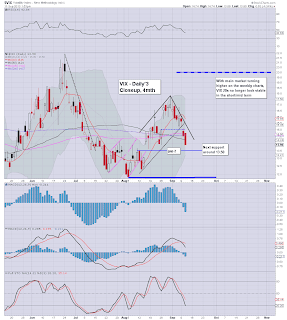 For the big/serious bear money still short the market, I have to imagine a lot of stops are going to be hit across the coming days.

*there seems little point holding out for a renewed down wave, and I waved the white flag some two hours ago.
--

Regardless, I'll still be here.
Posted by Trading Sunset at 18:56:00
Email ThisBlogThis!Share to TwitterShare to FacebookShare to Pinterest

The main indexes are comfortably holding moderate gains, for what is now day'10 of a rally from sp'1627. Bears look completely powerless, and the market is back in algo-bot melt mode, which looks likely to at least continue until the FOMC of next Wednesday. 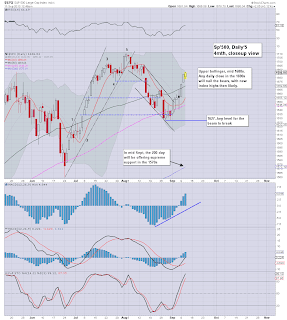 *I exited VIX-long earlier. I suppose some might argue 'we didn't even hit the 1690s yet', but really..price action is what matters..and market appears completely back into the old mode of 'drop a few pts at the open..then melt higher for rest of day'.

I guess some might also argue, that is probably the most bearish contrarian signal of all. It wouldn't be the first time I've nailed the top by exiting short.

As it is, I just don't sense ANY bearish downside momentum. Even worse for the bears..there are two major QEs to end the week.

Ohh, and just look at TVIX, that is -25% in the past 7 trading days...and it sure doesn't show any sign of stopping. 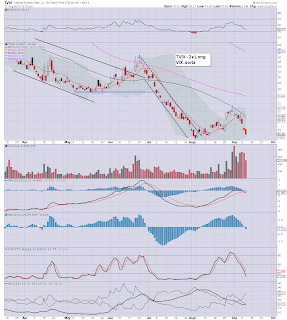 Poster 'What does the golden cross mean on the gap down today on AAPL?'

I think market is completely mis-pricing AAPL. Profits are still HUGE, the company is under-valued - relative to the main market by at least 50/75%.

It remains the case that people are still hung up on the nominal price of the stock, rather than actual relative worth.

The reverse case is true for AMZN.
Posted by Trading Sunset at 17:55:00
Email ThisBlogThis!Share to TwitterShare to FacebookShare to Pinterest

The main indexes are holding moderate gains after an early morning micro down-cycle. Bears appear utterly powerless, and the market is vulnerable to algo-bot melt into next week. A daily close in the 1690s..whether today..tomorrow or early next week..appears more likely than not. 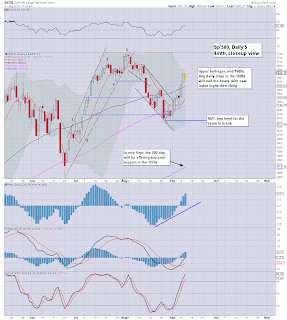 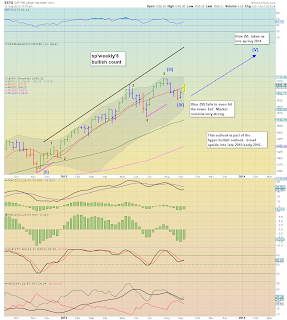 Well, however you want to label it, we ain't trending lower, are we?

Weekly charts could easily ramp for the next 6-10 weeks..and by then..Santa will be near...and we would likely just keep on going into the spring.

Its probably just a matter of when we start putting in a few daily closes in the 1700s.

Indeed, volatility is melting lower, and there is nothing due until next Wednesday.
-
time for lunch

With the weekly charts offering MASSIVE upside now...there is simply no point in holding short..in my view.

yours... waving the white flag of capitulation.
Posted by Trading Sunset at 16:57:00
Email ThisBlogThis!Share to TwitterShare to FacebookShare to Pinterest

Seen on the daily chart, the sp' is obviously stuck at multiple key resistance, including the 1680/85 gap-fill zone and the daily upper bol of 1686. Bears should be desperate for a daily close back under the 50 day MA, currently 1669...which seems highly unlikely today. 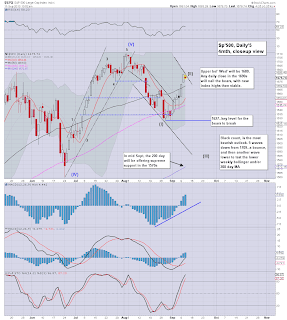 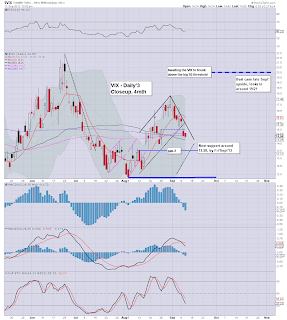 *it should be noted, VIX is showing no clear turn, and is actually still in melt-lower mode.
--

So..a quiet Wednesday, and I'm simply not expecting any clarity from today.

At best..bears will see a fractionally lower close.

*renewed problems for the bears on Thur/Friday...both are significant QE-pomo days.
Posted by Trading Sunset at 15:54:00
Email ThisBlogThis!Share to TwitterShare to FacebookShare to Pinterest

The main indexes open somewhat mixed, with the Dow +33pts, sp -2pts, but Nasdaq moderately lower after AAPL drops 5%. Metals are a touch lower, whilst Oil is slightly higher. 10yr yield is a touch lower at 2.94. Today will most likely be one of..nothing. 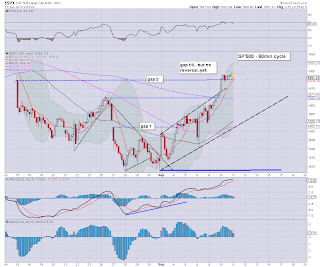 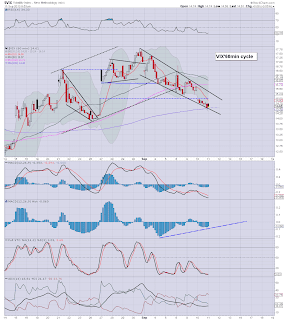 At best...bears should look for a moderately lower close, but even that looks difficult. There simply isn't any power on the downside, and there is no news..no anything to motivate this market lower. 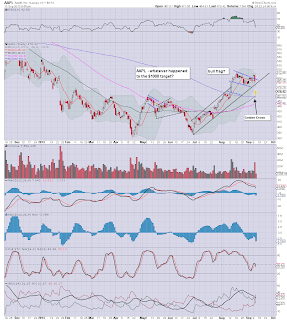 A golden cross, but today's gap lower is a major break..although - like the main indexes, we have an opening reversal candle.

--
I will start to take things seriously if VIX back in mid 15s..with sp <1670..but neither of those look likely today.
Posted by Trading Sunset at 14:57:00
Email ThisBlogThis!Share to TwitterShare to FacebookShare to Pinterest

Good morning. Futures are fractionally lower, sp -1pt, we're set to open at 1682. The bulls merely need to consolidate prices sideways for the rest of the week, whilst bears need to kick the market lower by 35/40pts to close the week marginally lower. 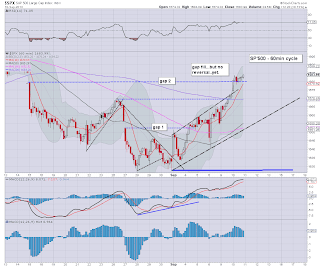 Baring any sporadic news, today is likely to be rather quiet.
-

Actually, in many ways, market is going to be susceptible to algo-bot melt. A close in the upper 1680s is very viable.

The one thing bears do have going for them..the hourly index/VIX charts are ticking lower, and we're set to go negative cycle this afternoon.
--

All things considered though, between now and the FOMC of next Wednesday, we'll more than likely just keep pushing upward.

*Ohh, if I sound a despondent bear...its because I am. I just can't see much chance of significant downside until the FOMC, and even then, why will we not rally on 'taper only 10/15bn?'
Posted by Trading Sunset at 13:40:00
Email ThisBlogThis!Share to TwitterShare to FacebookShare to Pinterest

Which way from here?

The market continues to battle higher, and has now decisively filled the upper gap in the sp'1680s. The big question remains, is this merely a gap-fill, or are we in the early phase of a very significant multi-month hyper-ramp into spring 2014? 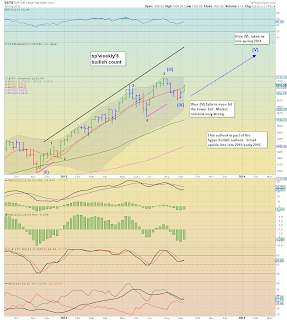 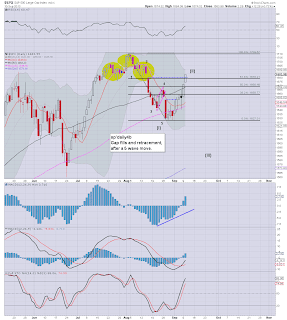 The weekly 'rainbow' chart looks even more disturbing after a second day of rather significant gains.

We've now climbed almost 29pts so far this week, and a break into the 1690s will surely clarify that something 'hyper-bullish' is underway. Anyone who suggest otherwise, I can only refer them to the Nasdaq weekly/monthly charts, which are now very bullish.

There is obviously going to be stiff resistance in the 1680s tomorrow, but frankly..the bulls don't 'have to push any higher this week. They've already accomplished more than enough for this week. It is up to the bears to start selling this market lower.


Which way from here?

Right now..on a sleepy Tuesday evening, my best guess...we just keep on going higher.  The bulls have not only the daily and weekly charts on their side now, but they have the Nasdaq at new highs, and the VIX is back into 'melt lower' mode.

Consensus in the mainstream is for QE to be reduced by 10/15bn next week, so..that's already factored in. Frankly, the only thing that might spook the market (if briefly) is if the Fed raise interest rates by 25bps. That is something to keep in mind for next Wednesday afternoon. 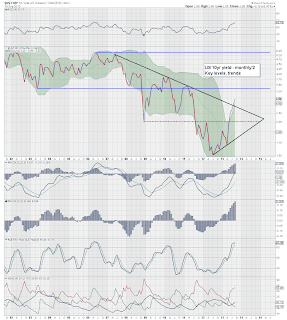 We have a clear breakout, the 3s are a given..and then 3.25. The only issue is how will equities cope when the 10yr yield is consistently putting in daily closes in the low 3s?

There is no major econ-data of note tomorrow. Neither is there any sig' QE-pomo.
--

*I remain long VIX (from 15.50s, so I'm now almost 1 full pt down). If the sp' breaks into the 1690s tomorrow..or later this week...and if the price action shows no sign of an equity down turn..there seems absolutely zero point in holding short the market.

I hope it won't come to that.

The main indexes closed moderately higher, with the sp +0.7% @ 1683. The two leaders - Trans/R2K, continue to accelerate, closing +1.9% and +0.9% respectively. Near term trend clearly remains to the upside, although bulls will have to fight to get a daily close in the sp'1690s. 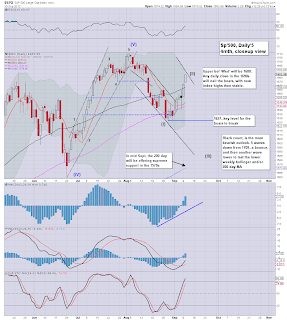 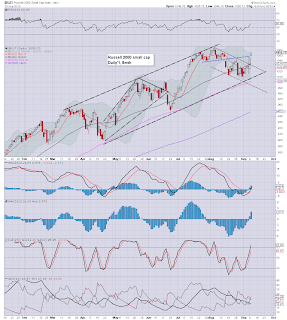 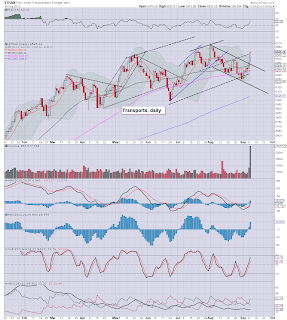 After the opening gap higher, the market effectively flat lined for the entire day.

Dull...dull....dull. If this is the start of a major new multi month rally (into spring 2014), this is exactly the sort of mind numbing price action we're going to have to get used to again.

..and indeed if that if the case, the bears might as well turn off their screens until April/May 2014.
--

With the threat of a US attack on Syria now seemingly off the agenda, market is even more pleased with the world. After all, everything is fine now..right ?

There is clearly nothing to worry about, not least of which is the US federal deficit - and associated deb mountain of 17 trillion.  Further, there is absolutely nothing to be concerned about in terms of those rising bond yields...right?