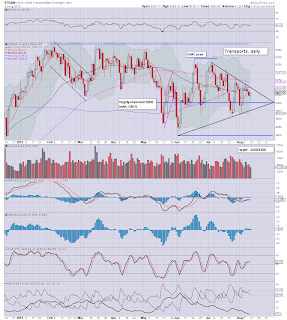 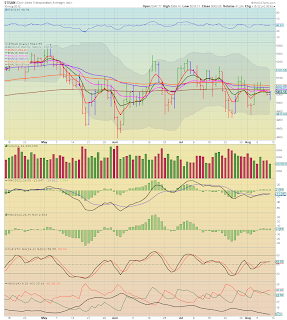 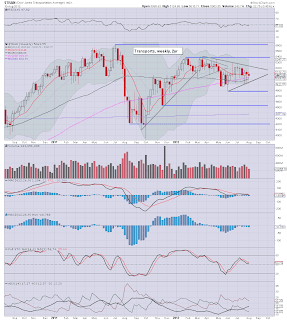 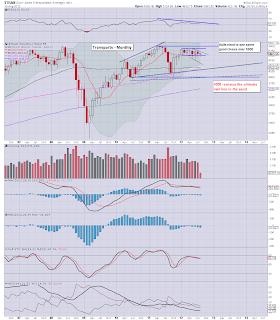 Posted by Trading Sunset at 20:48:00
Email ThisBlogThis!Share to TwitterShare to FacebookShare to Pinterest

A very quiet week for the main markets, but still a net gain of around 1%. The SP'500 is now very close to taking out the April peak of 1422.

Some are calling for a double top..others.. 'a minor fifth wave higher'. Regardless, we've seen one mighty jump off the June low of 1266, and there is currently no sign of it stopping. 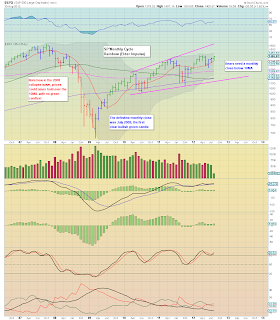 For the bears, this simple rainbow chart has to be painful to look at. The bounce off the 1266 low was - (myself included), expected to get stuck somewhere in the 1350/75 range. Yet, we've now got a weekly closing over 1400, and there is no sign of a turn lower.

I suppose those looking for a second deflationary collapse wave - on the scale of the original financial panic, could argue we are trading similar to Sept/Oct 2007.

If that is the case, we'd need to see an equivalent hit of the lower bollinger band - around sp'1200, by late Oct/November of this year. Its possible I suppose, and I'll certainly keep it in mind.
---

So, here we are, another strange week in market land. Very low volume, virtually no news - Europe seems fast asleep, and it now appears that Mr Market is right back to the infamous low volume melt up.

Have a great weekend

....Goodnight from London.
Posted by Trading Sunset at 04:00:00
Email ThisBlogThis!Share to TwitterShare to FacebookShare to Pinterest

Marginal gains for the main indexes today, with most closing the week around 1% higher. 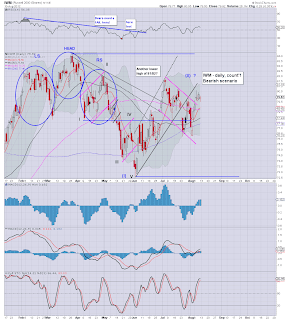 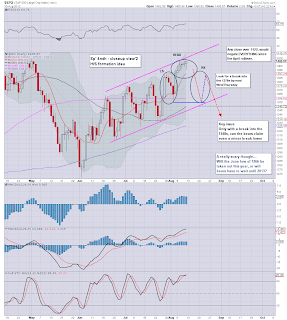 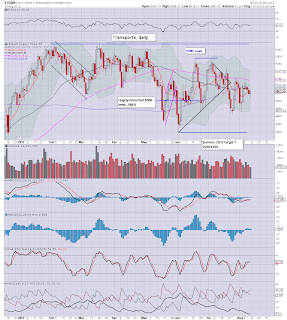 The Rus'2000 and the Transports remain weak, they are certainly not matching the gains seen in the big Sp'500 or the dow'30 these past 5 weeks.

We can be clear about this, there is NO sign of a turn lower yet, although a few indexes are showing signs of levelling out on the MACD (blue bar histogram) cycle.

Even if somehow we do start to cycle lower by the middle of next week, it seems likely we'd get a bounce somewhere in the sp'1360s. Whether that eventually comes to form a H/S formation, we'll just have to see.