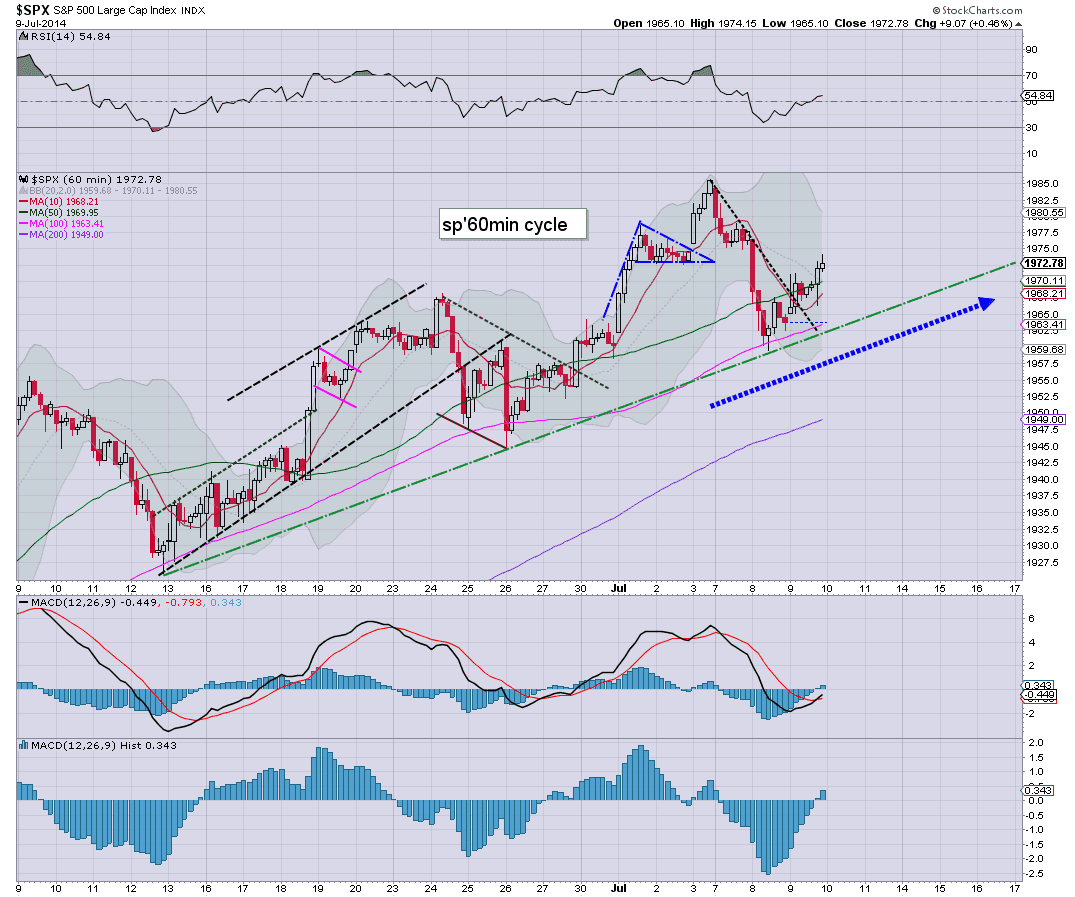 *its time for kick off between Netherlands and Argentina...

--
Thanks to those who said hello today. I'm still somewhat slow to reply, as I am still trying to fully sort out my email client, and other tech' stuff.

-
back later, with a full daily wrap at 8pm EST
Posted by Trading Sunset at 21:01:00
Email ThisBlogThis!Share to TwitterShare to FacebookShare to Pinterest

US equities have pushed a little higher after the algo-bots comfortably cope with the notion that QE will likely be fully terminated in October. Sp'500 looks set for a daily close in the 1970s, which will bring the market within 1% of breaking new historic highs. 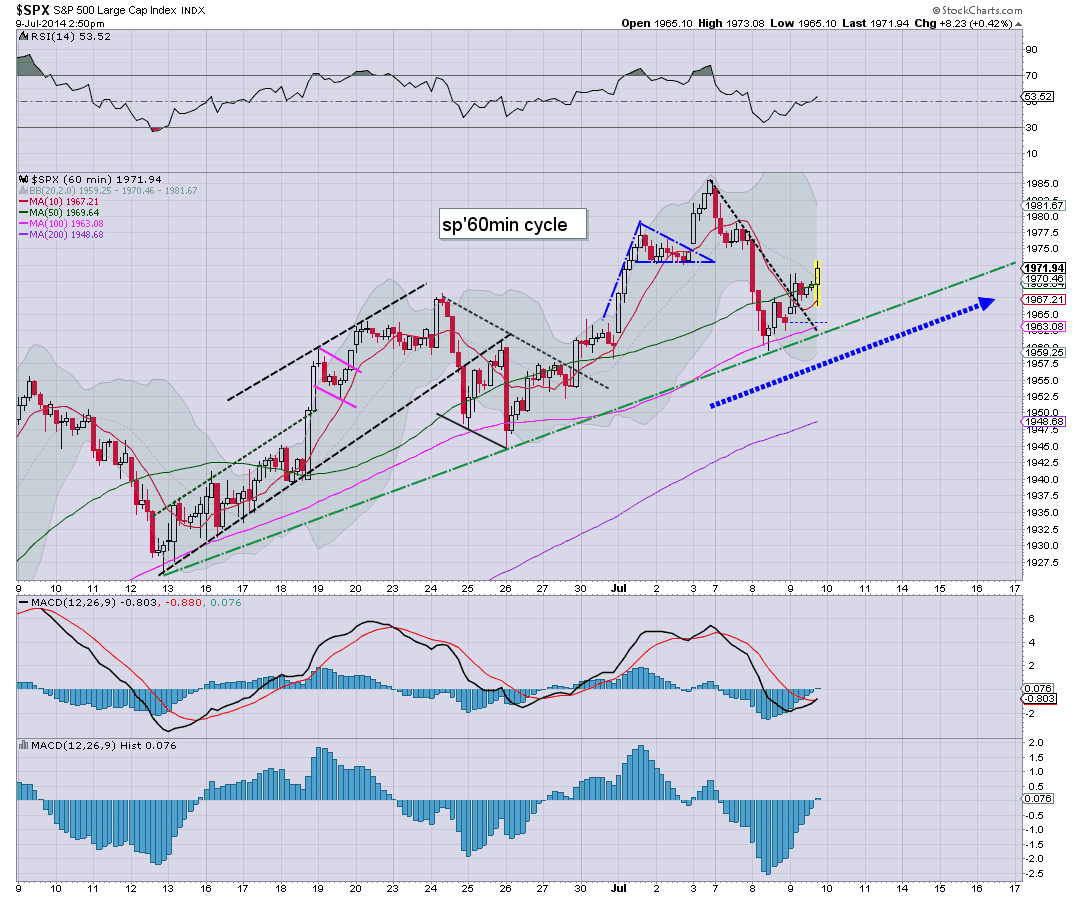 *we have Netherlands vs Argentina at 4pm EST coming up... so I will be keeping things light here.
---

..and what will the usual suspects be saying then? Ohh yeah, they'll be calling another top.
-


3.35pm.. Clown finance TV getting overly concerned about whether the Dow might close today above 17k. Really, it is of no concern.

Equity bulls have held the bears to another 2 day decline...and we look set to push higher from here.

Weekly charts are offering the sp'2050/75 zone by early September.
-

back at the close... briefly... since kick-off is at 4pm!
Posted by Trading Sunset at 19:52:00
Email ThisBlogThis!Share to TwitterShare to FacebookShare to Pinterest

US equities are holding moderate gains ahead of the 2pm FOMC minutes. Hourly index cycles are highly suggestive of a break to the upside, which will offer the 1990s as early as this Friday. VIX remains in melt mode, and a return to the 10s is viable into this weekend. 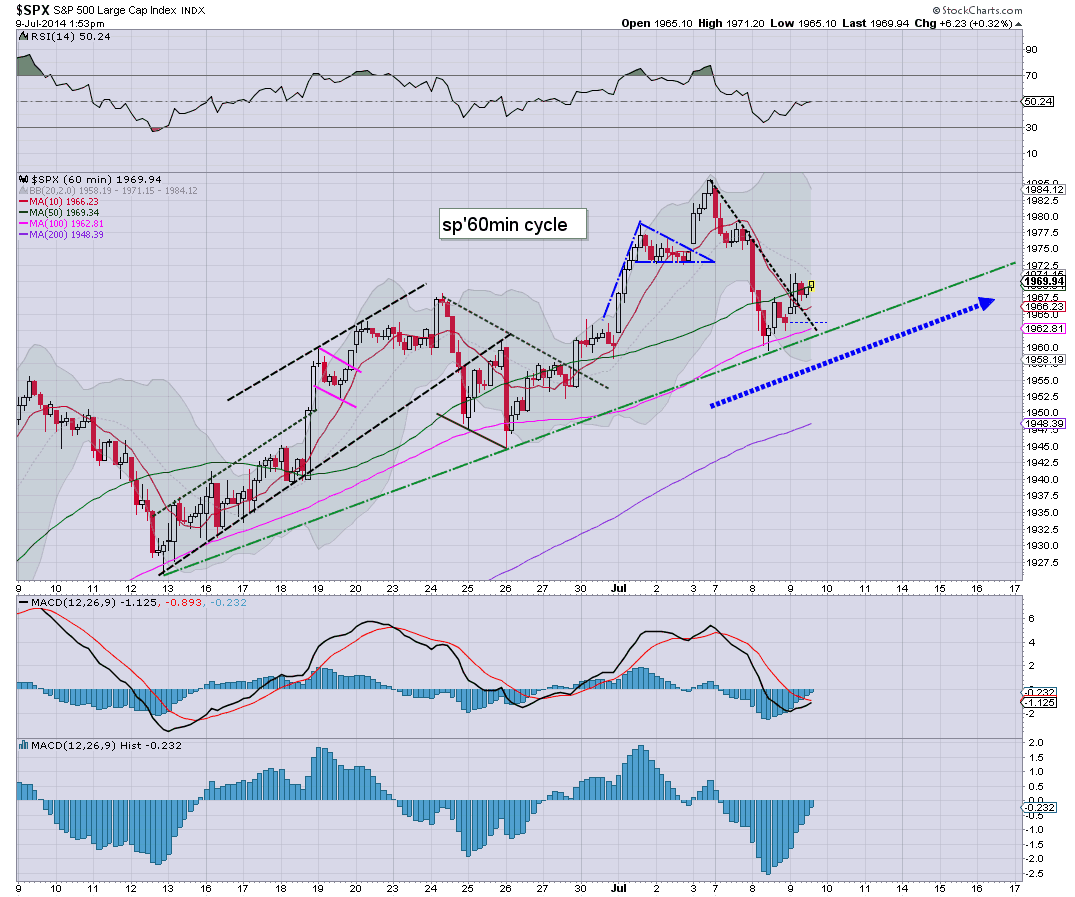 *price structure on the hourly IS a bear flag, but... the bigger weekly/monthly cycles are of course bullish, and thus default view would be in favour to the bulls.
---

So..lets see what the algo-bots make of the fed press release.

I would keep in mind that the equity bears had two days in their favour...and it only took the headline indexes around -1.3% below their historic highs - which was just last Friday!

From a pure chart perspective..we'll surely close today somewhere in the sp'1970/75 zone.
-

In the scheme of things, its minor issue, but what is clear, from November onward.... QE3 will be...concluded.

How the market eventually copes with that.... well, I'd refer anyone to April 2010..and May'2011. Didn't work out so well in either of those cases.

.. just another day in rainbow land.
Posted by Trading Sunset at 18:54:00
Email ThisBlogThis!Share to TwitterShare to FacebookShare to Pinterest

US equities are holding minor gains, although there is a touch of weakness in the more volatile R2K - which is holding just above 'revised' rising trend support. There is sig' weakness in Oil, -1.4%. 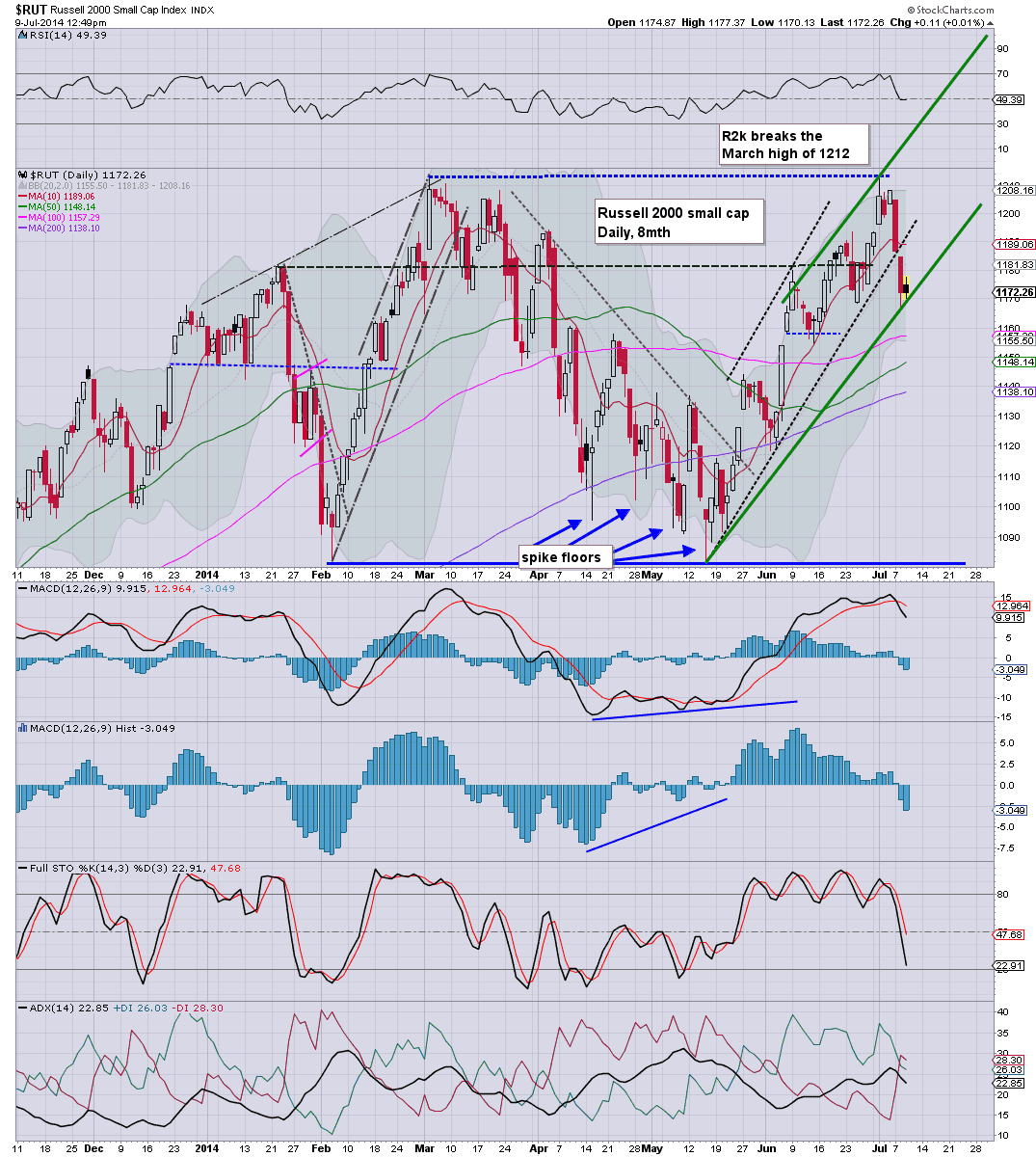 *I've only just noticed the big fall in Oil, did inventories annoy the commodity market?
--

Well, still an hour until the FOMC minutes are released. We should see some kind of move from there. Price action doesn't support the bears today, I'd be very surprised if it all unravels this afternoon.

1.02pm The R2K hourly cycle.. due to go positive into the close... although price structure is a bear flag.

One way or another...we'll surely close somewhere different from where we are right now.

Underlying upside remains.
Posted by Trading Sunset at 17:51:00
Email ThisBlogThis!Share to TwitterShare to FacebookShare to Pinterest

12pm update - chop ahead of the Fed minutes

Mr Market continues to hold moderate gains, with the sp'500 content to trade within the 1965/70 zone. There is a clear absense of any downside pressure, and if the market likes the press release from the Fed this afternoon, a daily close in the 1970s appears assured. 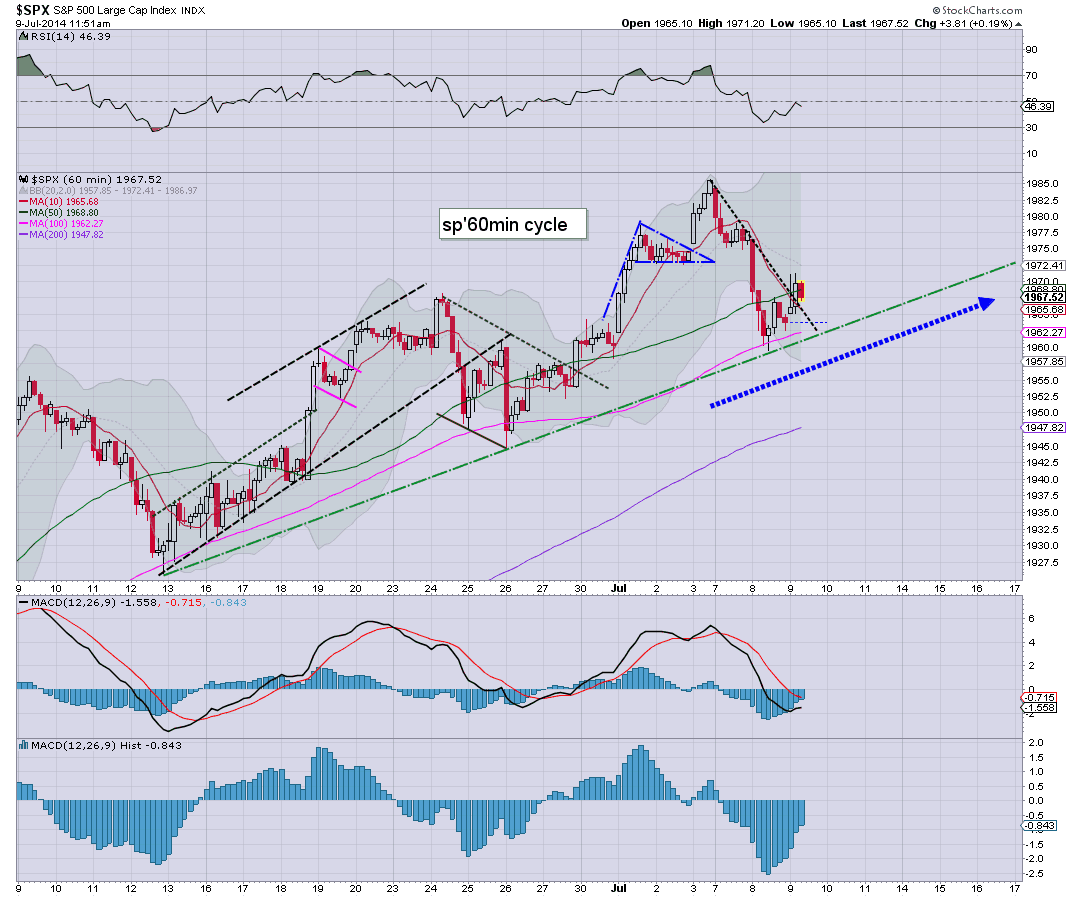 There isn't much to add. It remains a market that is comfortably holding together.


--
time for another icy drink... whilst watching clown finance TV (I try to limit my viewing, but the lunch time show can be kinda useful to watch), if only to see what stocks they are trying to pump!
-

comments are welcome.
Posted by Trading Sunset at 16:51:00
Email ThisBlogThis!Share to TwitterShare to FacebookShare to Pinterest

11am update - the bears are absent 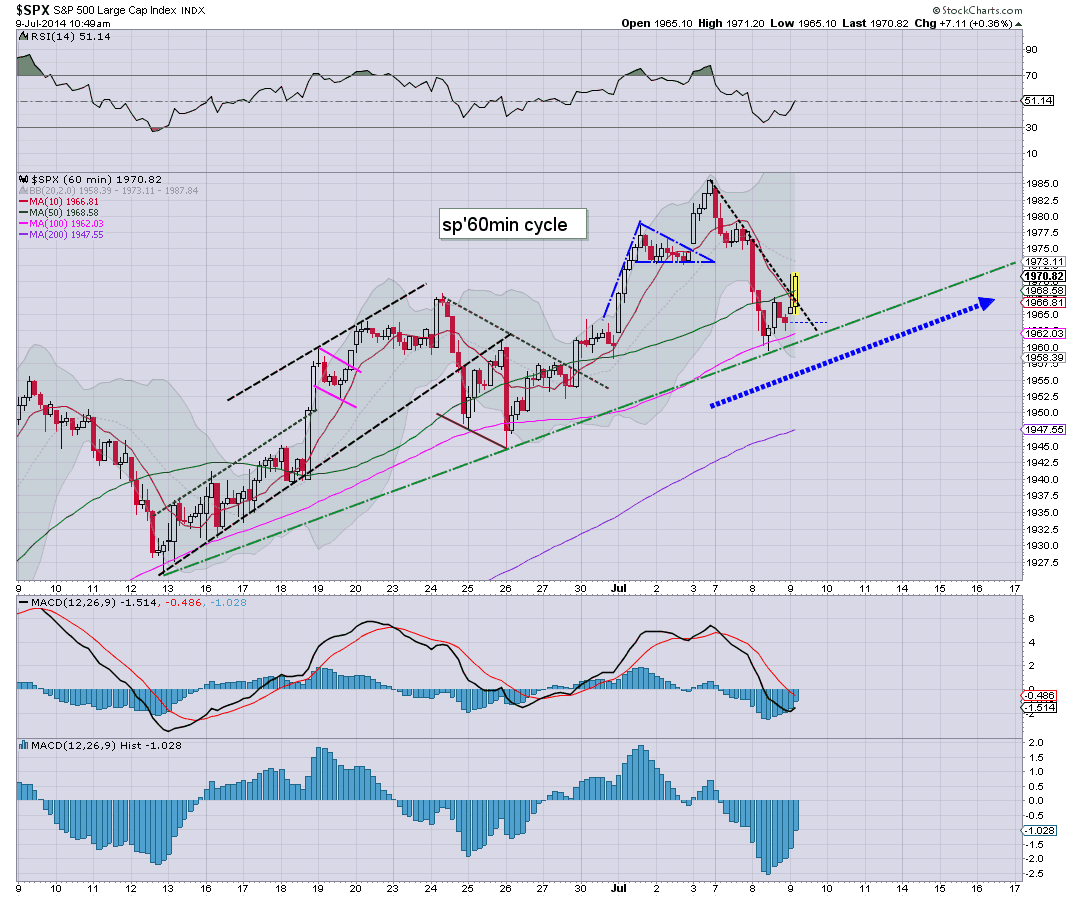 ...back from the mall (picked up an AMZN delivery, via one of their locker boxes, kinda good service. AMZN lose money on just about every sale, and I'm fine with that.
--

So...we're flirting with the sp'1970 threshold, and is indeed less than 1% from breaking a new high.

All those maniacs getting overly excited about a 2 day decline....sigh.

Airline stocks encountering some chop... and UAL is almost back to flat, after gains of 3%. I'd still expect the airlines to power higher though, not least if the broader market is in the 2000s later this month.

SDRL with notable gains of 2.5%.. after the big -5% Tuesday drop.
-
time for an early lunch...back at 12pm
Posted by Trading Sunset at 15:51:00
Email ThisBlogThis!Share to TwitterShare to FacebookShare to Pinterest

US equities open moderately higher, and there looks to be high probability of a daily close in the sp'1970s. There is notable strength in the Transports, especially the airlines, with AA, DAL, and UAL all seeing very significant gains. 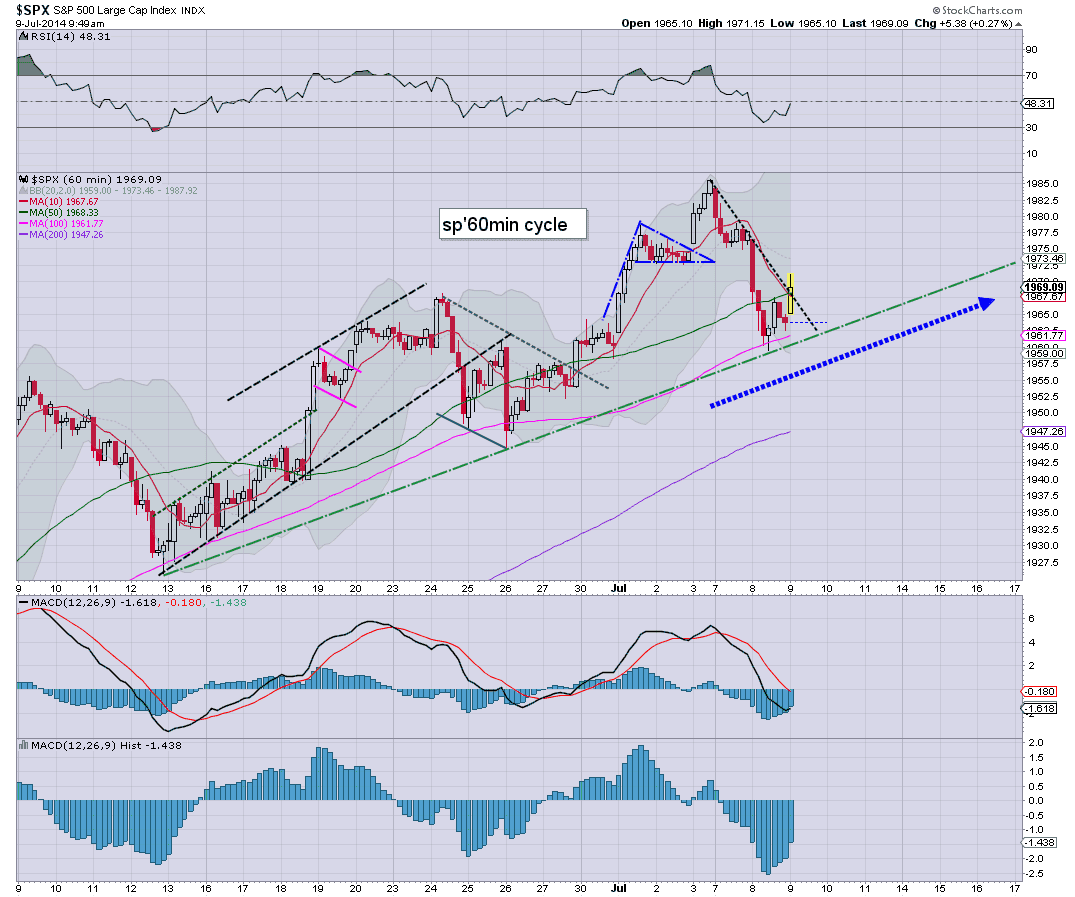 So...we're higher, with the hourly cycles all ticking higher...and offering upside across the rest of the week.

--
Airlines are continuing to gain after yesterdays sharp morning reversal... 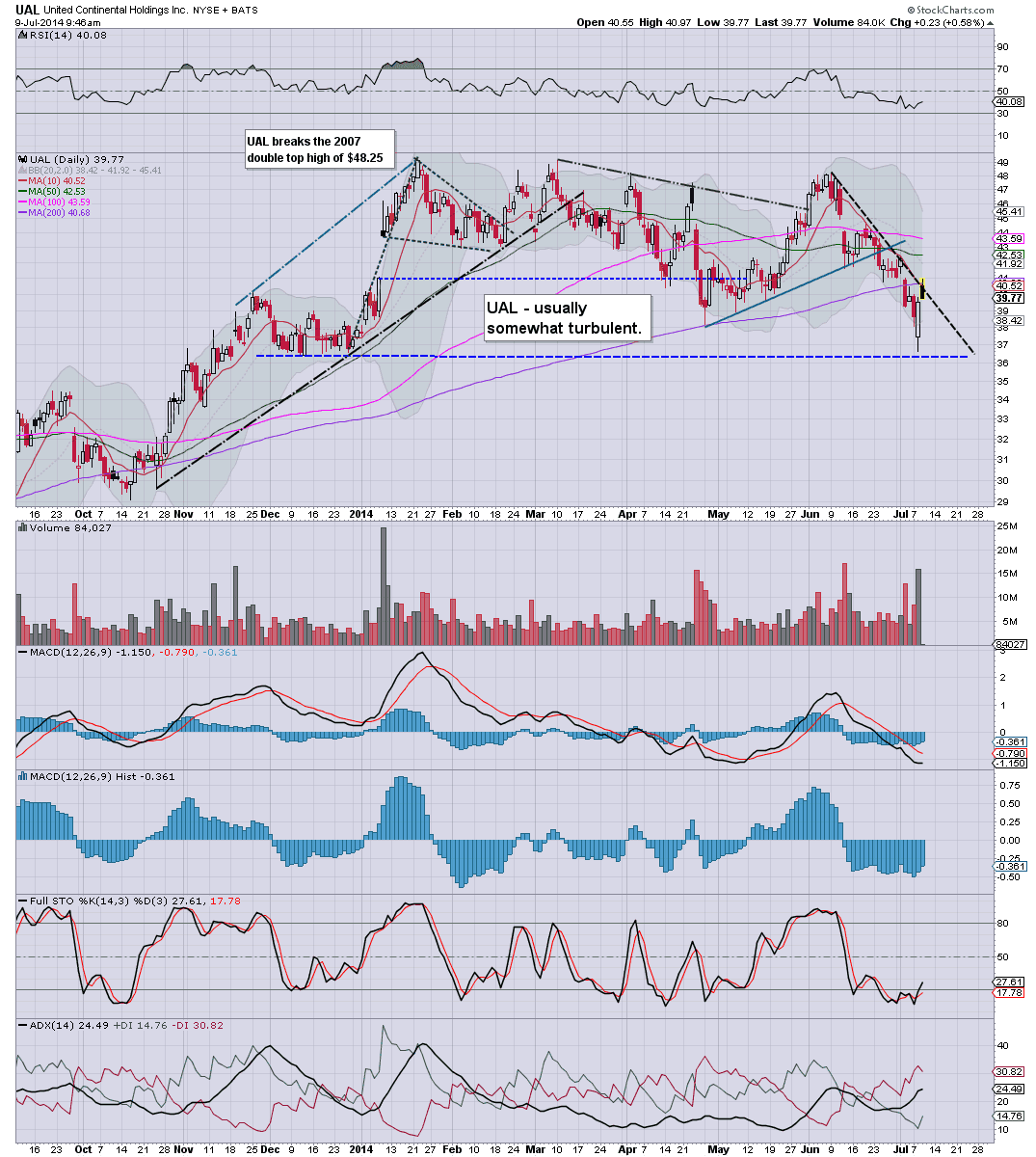 Upside for DAL and UAL both looks to be $50 (on a 6-9 month basis). Go look at the balance sheets.
-
Notable weakness, GRMN, -4%, but there is nothing much wrong with that company..as far as I know.


time to pick up a delivery...back soon .
Posted by Trading Sunset at 14:52:00
Email ThisBlogThis!Share to TwitterShare to FacebookShare to Pinterest

Good morning. Futures are moderately higher, sp +6pts, we're set to open around 1969. Precious metals are higher, Gold +$4. Mr Market will be quietly waiting for the FOMC minutes - due at 2pm, for an excuse to climb across the remainder of the week. 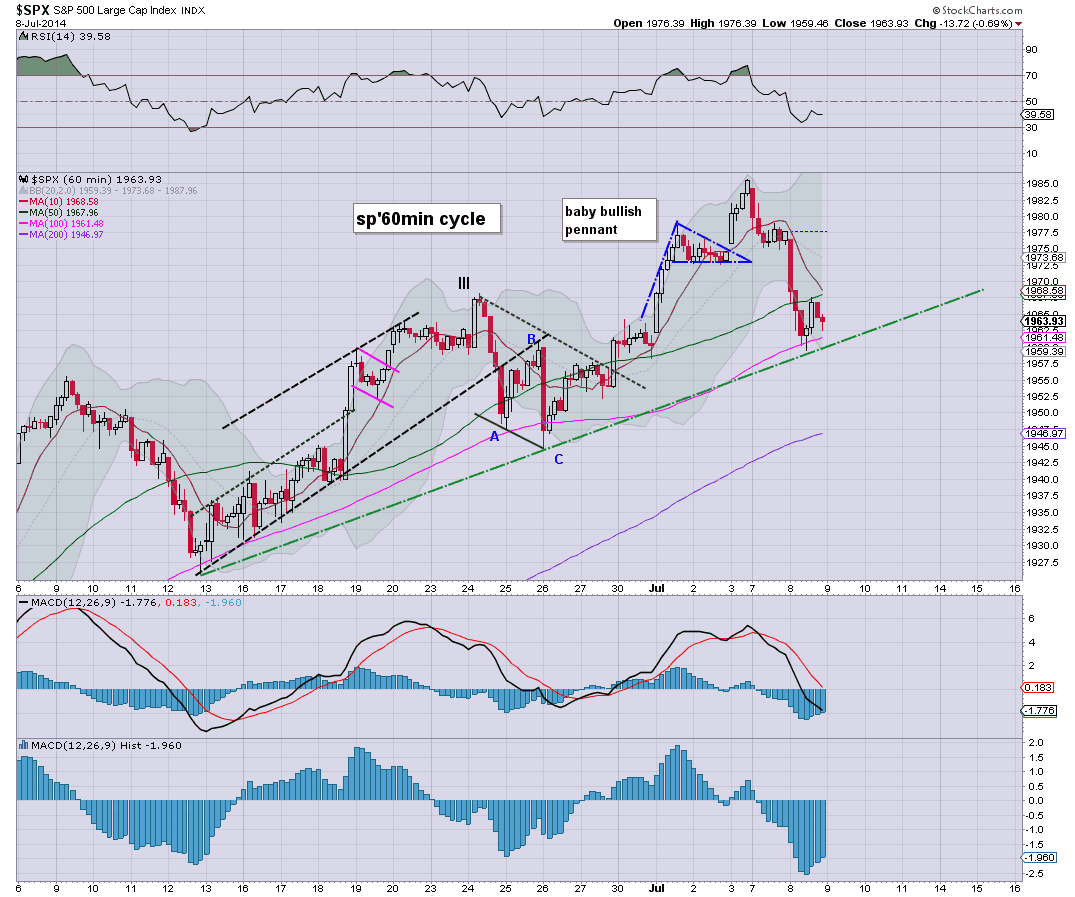 So... the day after the 'horror show' of Brazil/Germany, and Mr Market looks set to at least open somewhat higher.

*I will be keeping a close eye on the airlines today, they were leading the reversal yesterday.


9.34am... and here we are.. back in the 1970s. Airline stocks...flying....lead by AA.
Posted by Trading Sunset at 13:32:00
Email ThisBlogThis!Share to TwitterShare to FacebookShare to Pinterest

US equities saw a second consecutive day of declines. Again, there was particularly significant weakness in the R2K, which by late morning had built declines of around -3.5% across just 9 trading hours. Regardless, the primary bullish trend remains... intact. 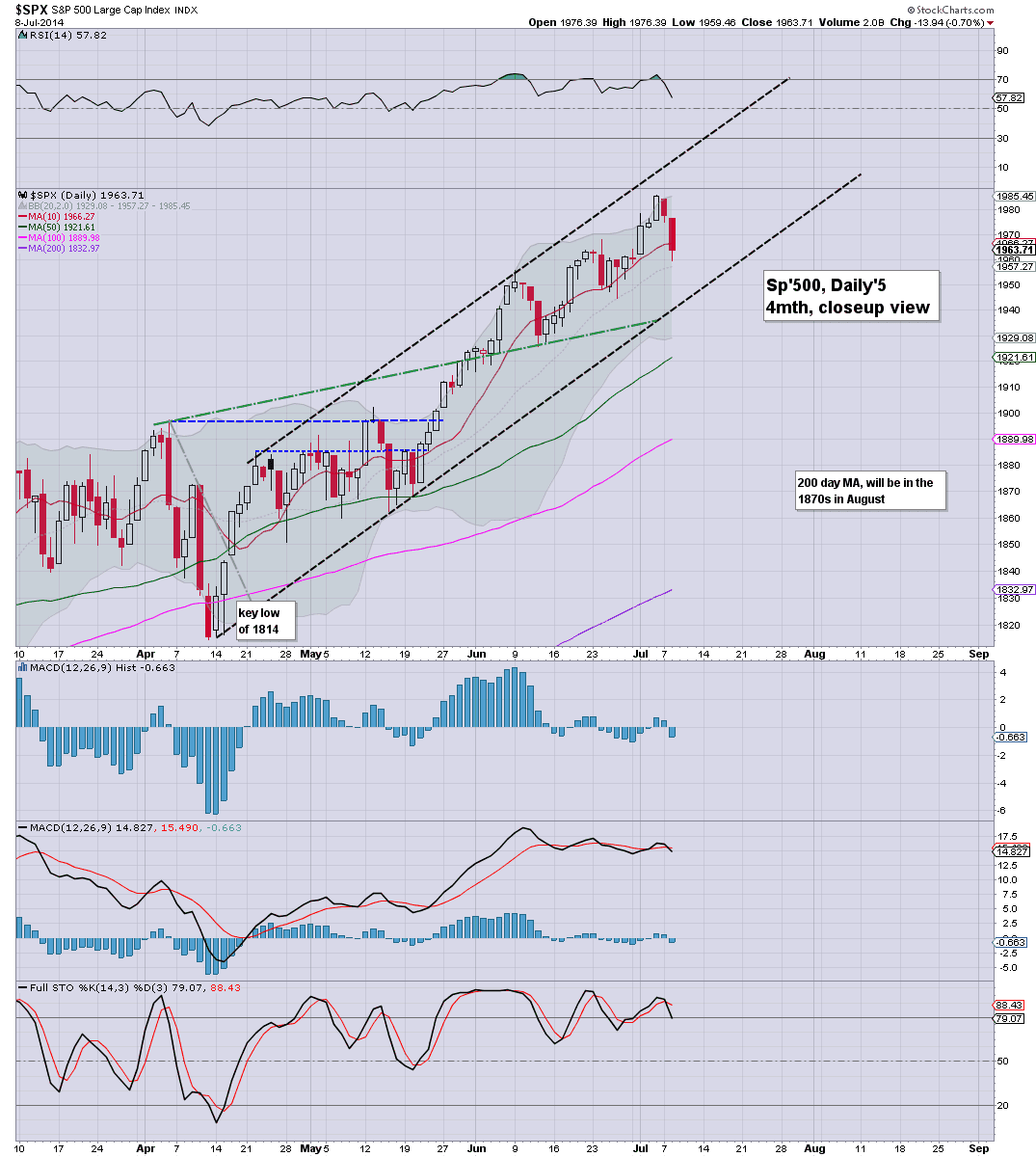 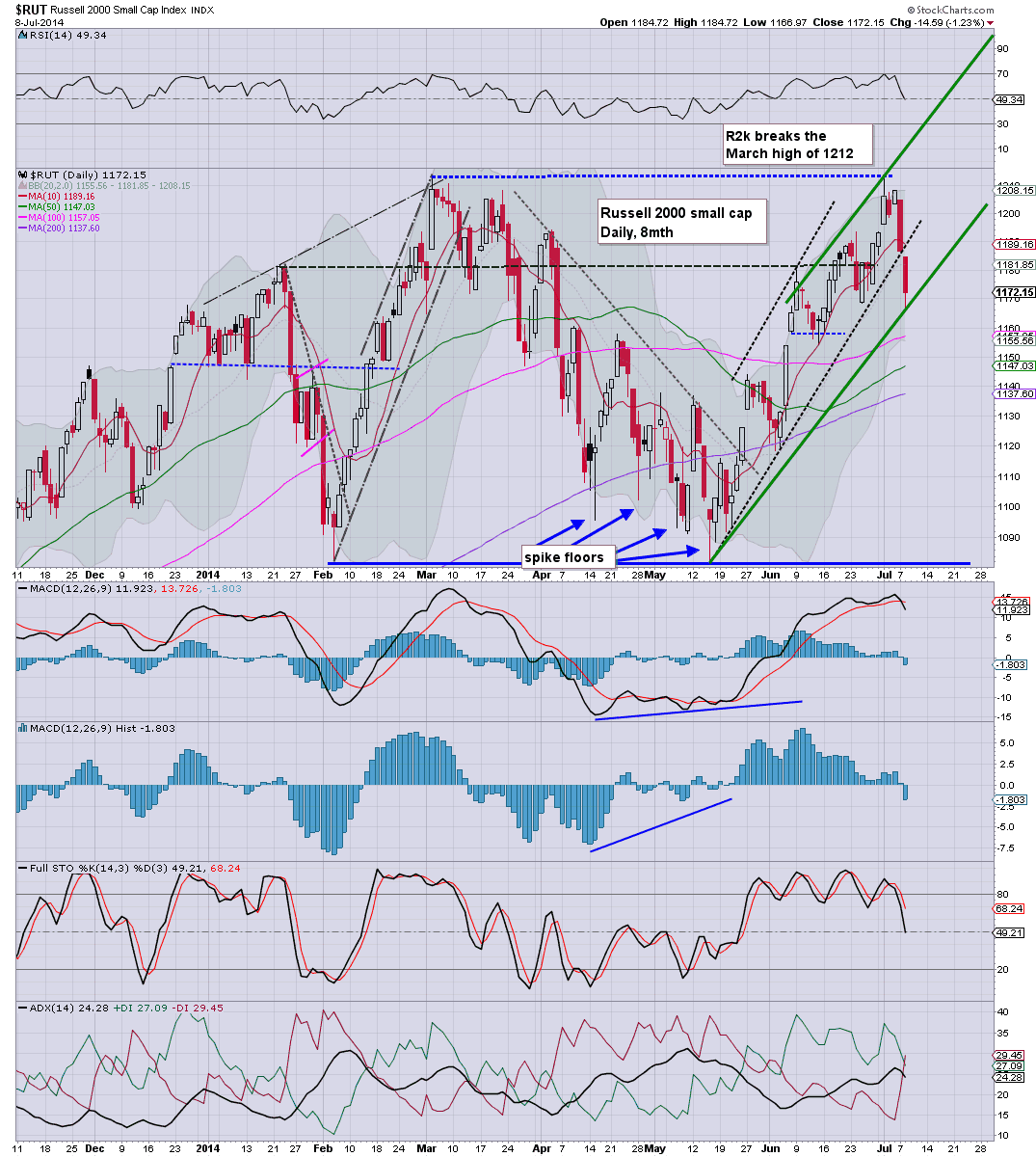 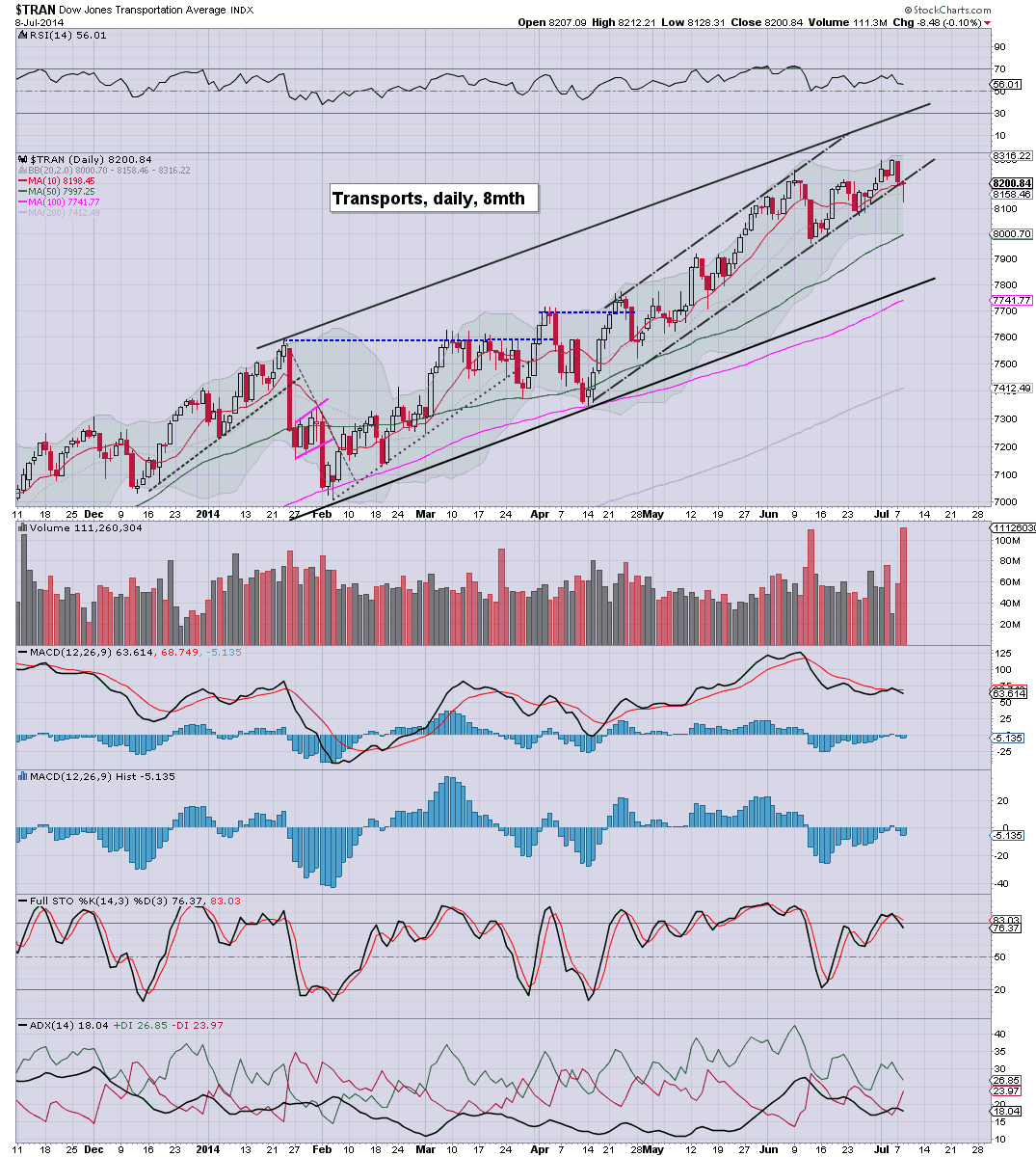 I can understand how those who are more focused on the R2K were pretty impressed by the further declines this morning. Certainly, it feels like a fair while since we've seen such persistent weakness. The R2K has broken the rising channel - from the 1080 lows, but on any basis, I can't see it much below the 50 day - which later this week, will be around 1150.

In the scheme of things, a two day pull back is entirely natural. When you consider the broader market - not least the 'old leader' Transports, the market actually held up pretty well today. Indeed, there were notable reversals on a great many individual stocks, all suggestive that a short term low has already been put in.

Personally, I will be somewhat surprised if we see the sp'500 take out today's low of 1959, but even if we do... we'd still level out somewhere not too much lower.

With the market brushing sp'1960/59 today, the VIX was in the mid 12s, but only managed to close with gains of 5% in the upper 11s. Even the low teens still seem out of reach. 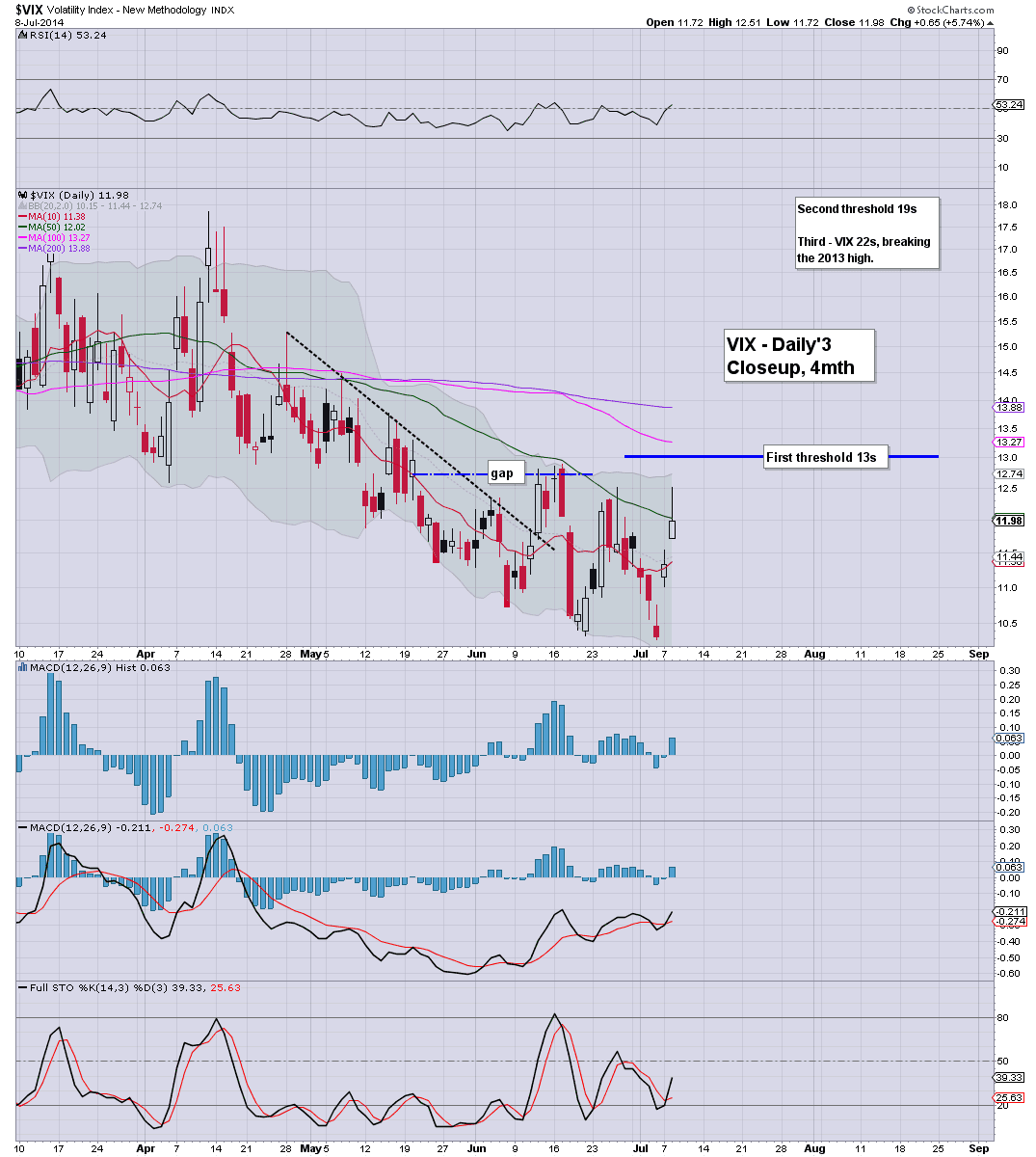 Right now, the upper teens/20s look entirely out of range, even if the market fell all the way to test the big sp'1900 threshold.

I certainly have zero intention of being long VIX for at least some months, and if we are to see the sp'2100s, then I won't be meddling in the VIX until spring 2015, which is a pretty depressing thought.

The only thing of significance tomorrow are the FOMC minutes (2pm). No doubt the algo-bots will be playing their word count games, seeking reassurance of 'extended low rates', etc.

*next sig' QE is not until next Thursday
--

Tonight's semi-final of Brazil vs Germany was nothing less than a sporting horror show. I think many watching are still asking themselves 'did we really just see Brazil lose 7-1' ? I've never seen a game like it, and doubt I ever will again. Watching the host nation get systematically dismantled across 90 minutes... was an utterly bizarre TV spectacle.

I can only imagine the upset and dismay across Brazil this evening. No doubt though, they will bounce back. Brazil will actually play again in the competition this Saturday, in a 3rd/4th place play off, probably against the Netherlands. Perhaps a win, or at least some semblance of 'quality play' will help to soothe against a defeat that for those watching... will never forget.

I will now hope for an Argentinian win tomorrow, only to then get beaten 100-0 by the might of Germany in the Sunday final.