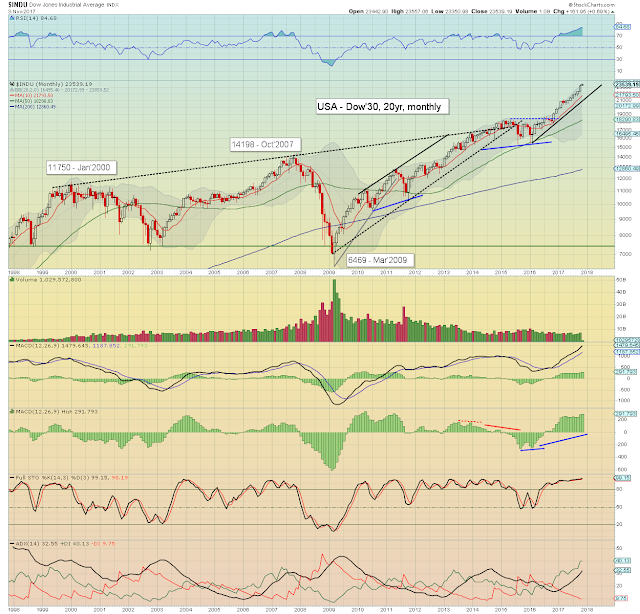 Q3 earnings have come in broadly fine, and in some cases (such as INTC, MU, MSFT, AAPL) outright superb. Many companies have raised their outlook for 2018, as they see an acceleration in the economy. The econ-data is supportive of such a view, especially GDP, Chicago PMI, and various sentiment surveys.

Equity bears have nothing to tout unless a bearish monthly close. For me, that would constitute a close under the monthly 10MA. I do not anticipate such a monthly close for a very considerable time to come.
-- 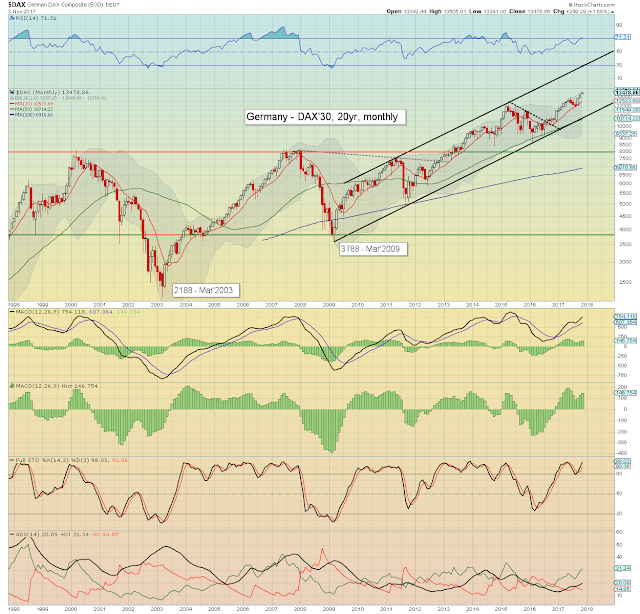 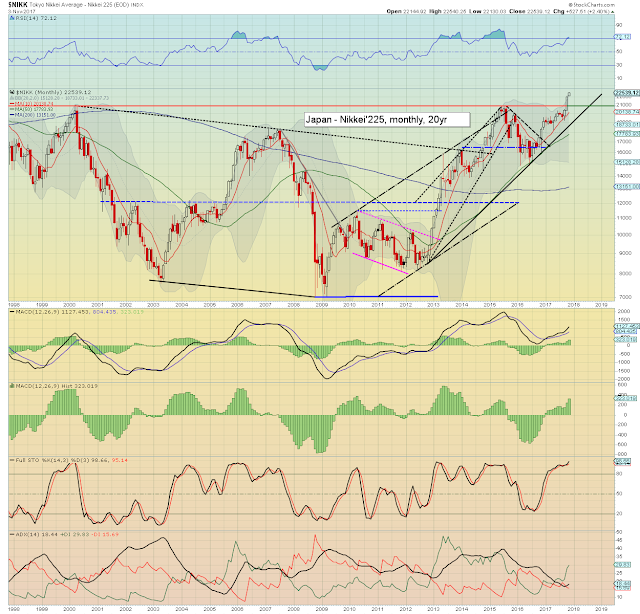 The BoJ fuelled Nikkei soared 1655pts (8.1%) to 22011, the highest close since June 1996. Indeed, the Oct' gain is very important when seen on a multi-decade chart. It is a massively important breakout, and offers vastly higher levels. Next key threshold is 26k, then the Jan'1990 high of 38915.80. I recognise the secondary target will be seen as outrageously bullish, but the Oct' breakout is suggestive of it within 2-3 years. 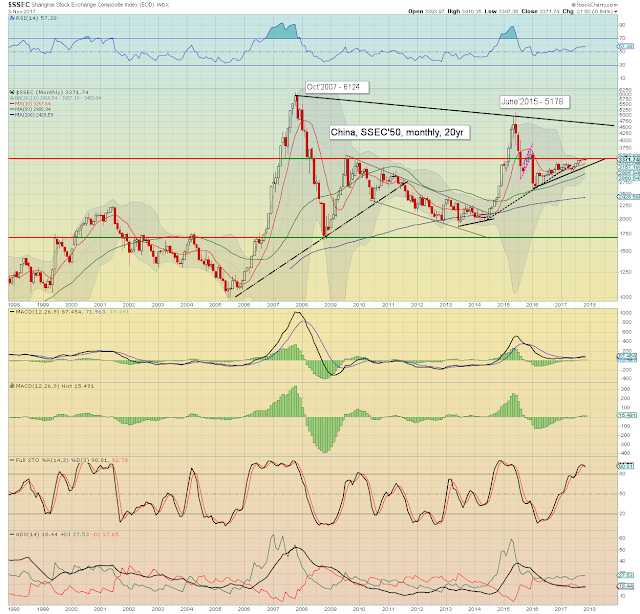 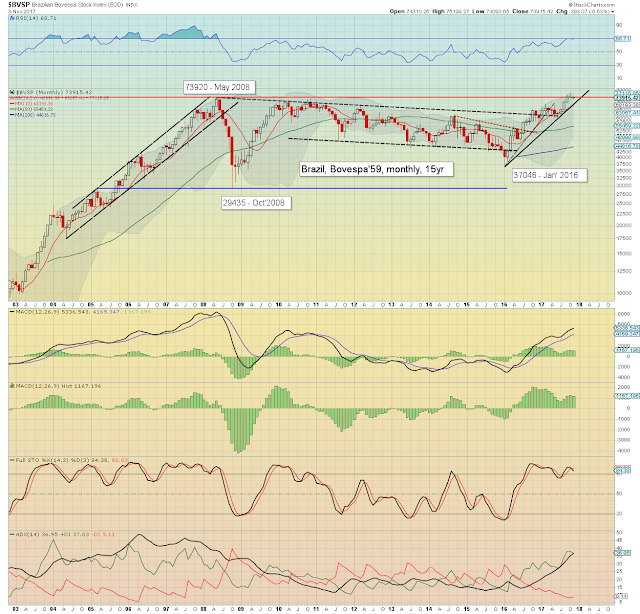 It was a mixed month for Brazilian equities, with the Bovespa breaking a new historic high of 78024, but settling +14.98pts (0.02%) at 74308. Even though Oct' closed effectively flat, the fact the 2008 historic high has been decisively exceeded is massively important for the mid term.

Just consider that the Bovespa managed to break a new high, even though commodity prices are still broadly subdued. Soft target is a monthly close above the Oct' high, and from there, a grander target of 100k by late 2019. Eyes on the CRB, a monthly close >197 would be decisive, and suggestive of at least another 10% by mid 2018, which should equate to BVSP around 85k. 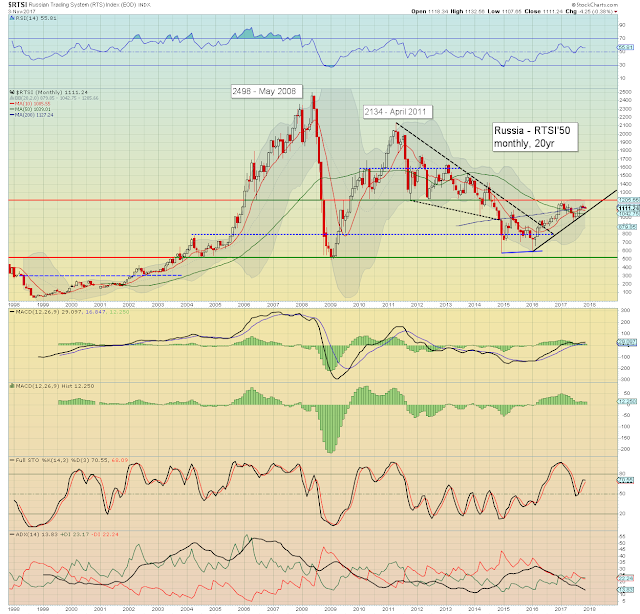 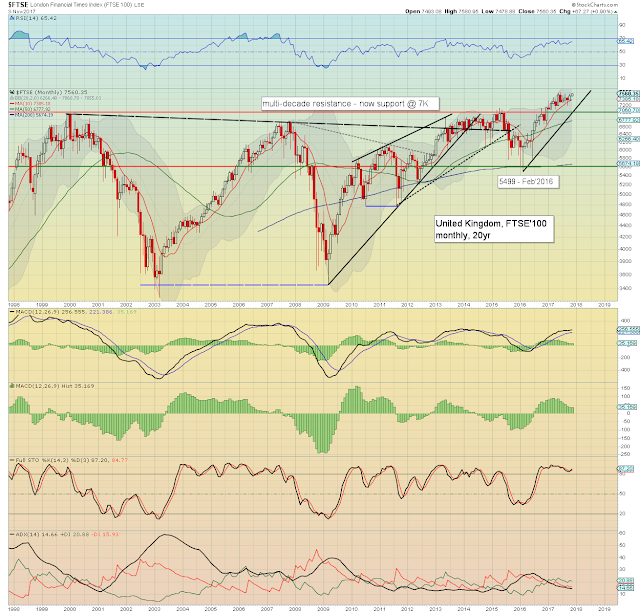 The UK market climbed 120pts (1.6%) to 7493, and is currently very close to breaking a new historic high. Most important to keep in mind is the monthly close >7k, as achieved in Dec'2016. Since then, price action has been rather choppy, but 7k is holding as new core support. By definition, the break >7k offers grander upside to around 10k. Clearly that is going to take some time, but it looks just about viable by end 2018.

I shall add, the UK political scene remains 'unstable'. PM May will very likely quit (or be kicked) by her own (Conservative) party within a year. As things are, Labour leader Corbyn, would likely sweep to power. Corbyn is an outright communist, and it'll be fascinating to see how the UK capital markets cope with such a leadership. When the next recession hits, how many hours would need to elapse before Corbyn is dialling the BoE to initiate 'QE for the people'? 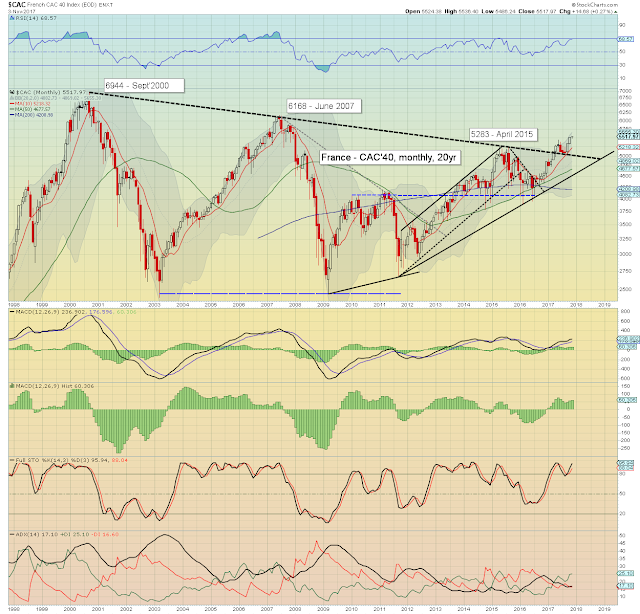 French equities gained a very significant 173pts (3.2%) to 5503. Technically, the French market has classic price structure. We have a breakout in March, then a back test across the summer, and we're now pushing to new multi-year highs. Next soft target is the 2007 high of 6168, which is currently another 16.7% higher. That is most certainly viable by late summer 2018. 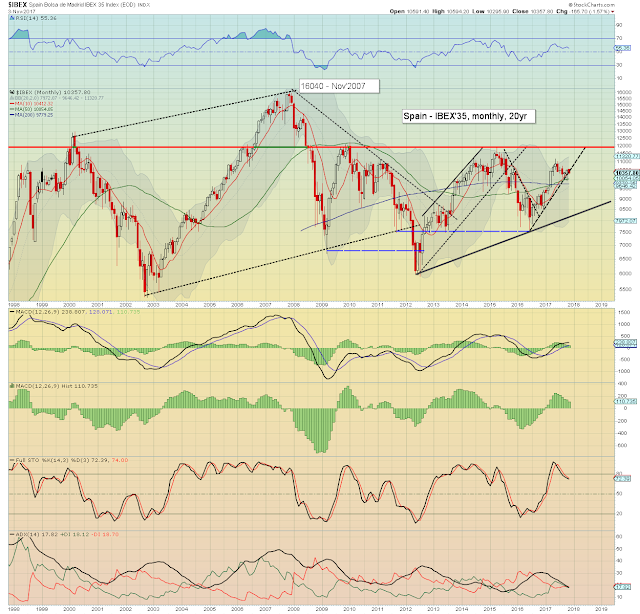 The Spanish market saw a very mixed month, settling +142pts (1.4%) to 10523. The intra month low of 9922 was of course due to the Spain/Catalan dispute. Its pretty incredible that the market recovered, even settling sig' higher. Short/mid term outlook remains bullish, so long as the 10k threshold holds. The 12k threshold is obviously critical. A challenge of that seems probable by summer 2018. Any monthly close >12k will offer next target of 15k, and then the hist' high of 16040. It could be argued price structure from May has formed a large bull flag, which would be confirmed with any price action >11k 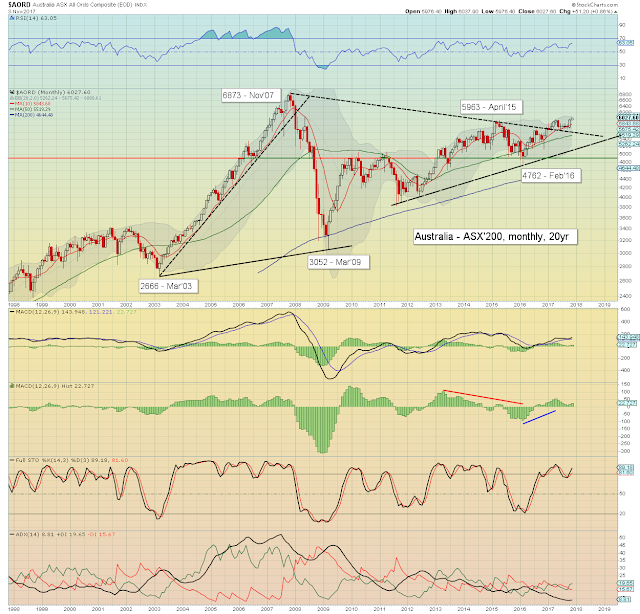 Most world equity markets continue to power upward, broadly lead by the US, Germany, and Japan.

Russia and China are lagging, but both are very close to key breakout thresholds.

Commodities appear poised for broad upside in 2018. If correct, it will be especially bullish for the BRICs, but all markets would benefit to some degree.
-- 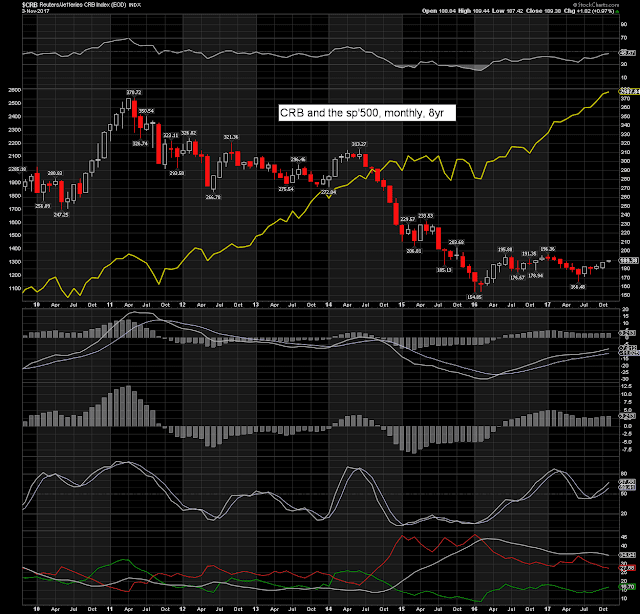 The CRB is currently net higher for a third consecutive month, +1.0% at 189.38. The 195/96s are key. To be decisive, a monthly close >197s, will offer confidence of upside to around 230 by late summer 2018. If correct, that would have massive bullish implications for world equities, and see the current upward trend - from early 2016, accelerate.
--

There are still a fair few corp' earnings to appear, but it will be a somewhat lighter week in terms of data.

*the only fed official scheduled is Dudley on Monday - who will be speaking on 'Lessons from the Financial Crisis', which might garner some media attention.

**US clocks change in the early hours of Sunday Nov'5th. Yours truly will be glad to return to the normal 5hr difference.
--

If you value my work, and think I'm worth around $1 per trading day, subscribe to me.

--
Extra charts in AH (usually around 7pm EST) @ https://twitter.com/permabear_uk
--
*the next post on this page will likely appear 6pm EST on Monday.
Posted by Trading Sunset at 16:00:00
Email ThisBlogThis!Share to TwitterShare to FacebookShare to Pinterest
Newer Posts Older Posts Home
Subscribe to: Posts (Atom)