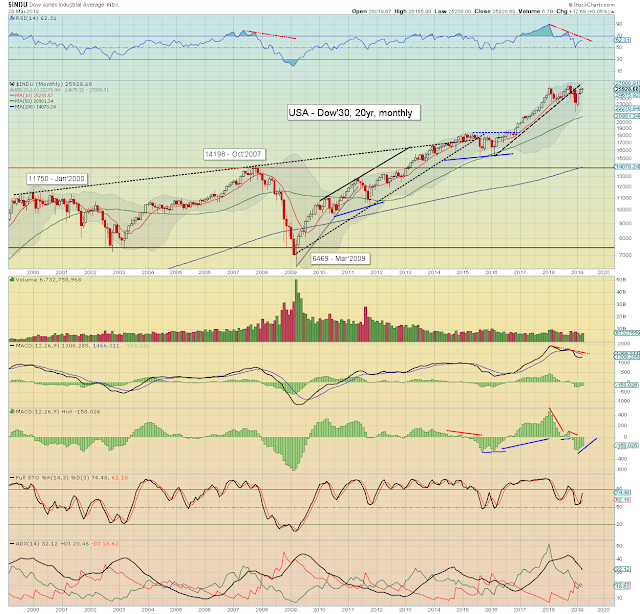 The mighty Dow climbed for a third consecutive month, settling +12pts (0.1%) at 25928. Note the monthly 10MA at 25293, which was comfortably held above, and makes for an outright bullish March settlement.

Underlying MACD (green bar histogram) cycle ticked higher for a second month, as price momentum is slowing swinging back toward the bulls. At the current rate, a bullish cross is due June/July.

It is realistic to see equities battle upward until the fed cut rates. Right now, that appears likely no earlier than the FOMC of Oct'30th or Dec'11th.
-- 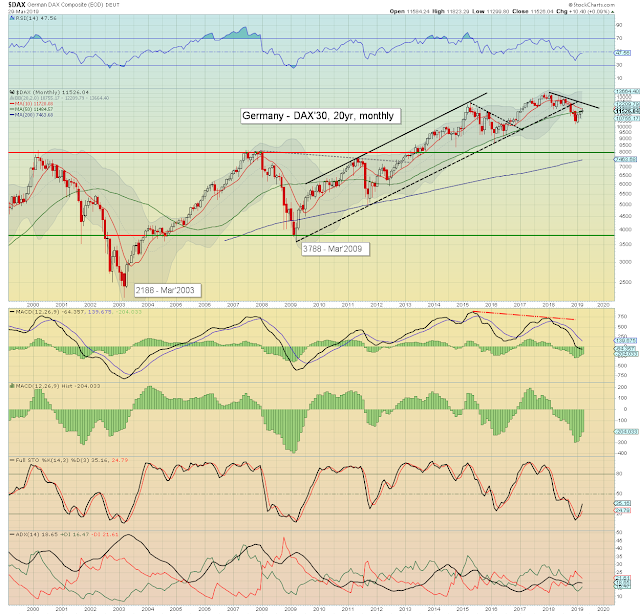 The economic powerhouse of the EU - Germany, saw equities climb for a third month, +10pts (0.1%) to 11526. The key 10MA is 11720, which was briefly crossed over this month. Price momentum still favours the bears. There remains a stark divergence between price/momentum stretching from April 2015>Jan'2018.

The German economy continues to weaken, as Q4 GDP is flat-lining at 0.0%. The ECB's NIRP is not helping, with the derivatives time-bomb of Deutsche Bank ticking toward zero.
-- 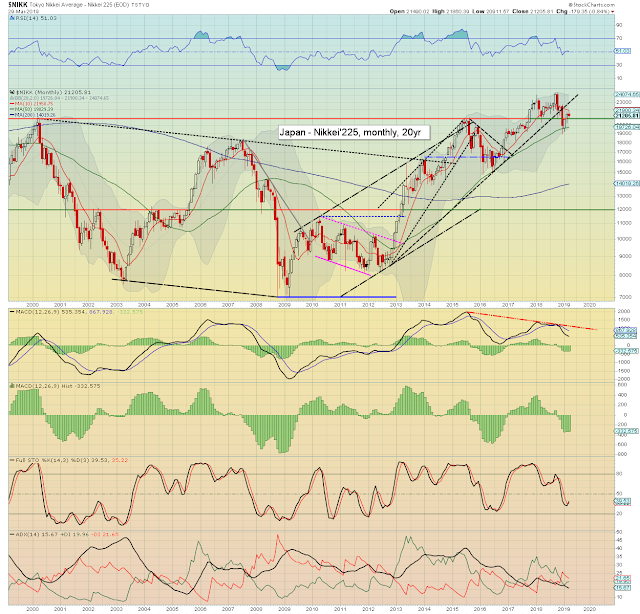 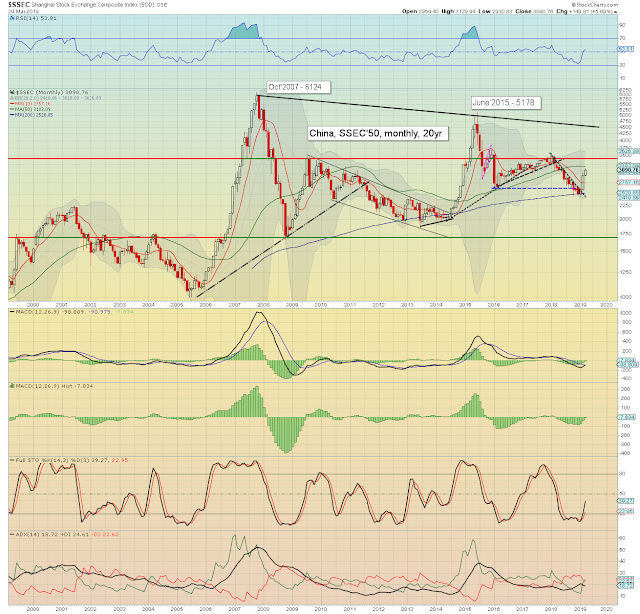 Chinese equities climbed for a third month, with the Shanghai comp' settling +149pts (5.1%) to 3090. Technically, its open air to the 3400s, which are around 10% higher. Price momentum is set to turn positive at the April'1st open. No doubt, the communists at the PBOC are continuing to meddle. In theory, the China bulls should control things at least into mid year. 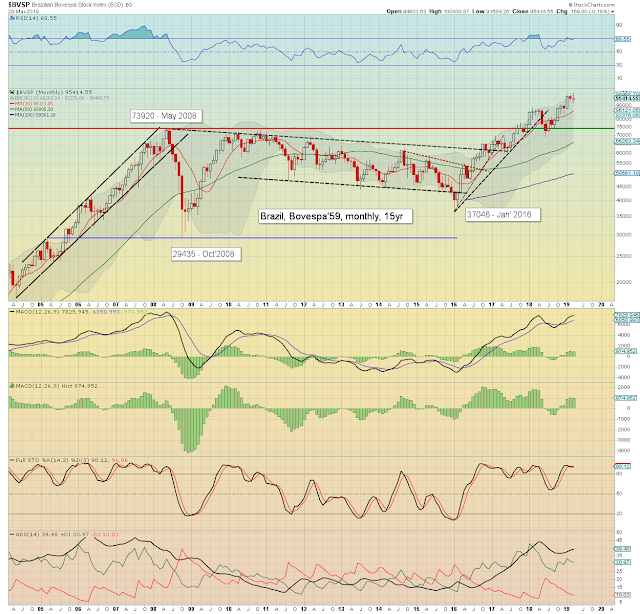 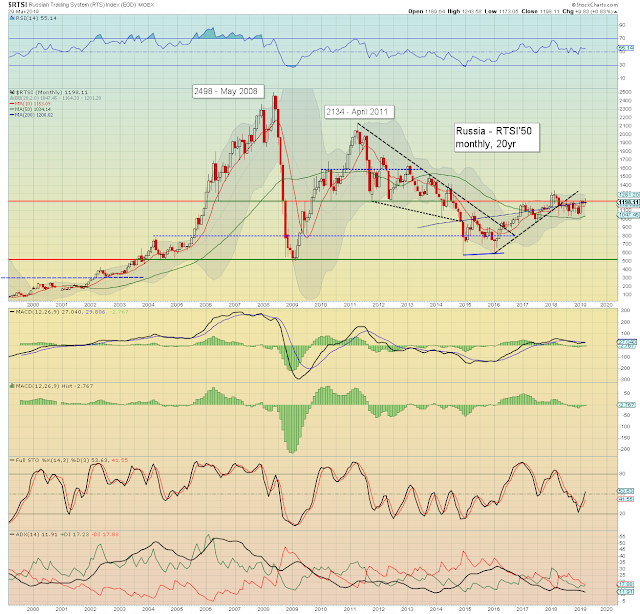 Russian equities saw a choppy March, settling +9pts (0.8%) to 1198. The 1200 threshold remains powerful resistance. A monthly settlement >1200 would offer a run to the 1500s by late summer. Higher energy prices would really help this market/economy. 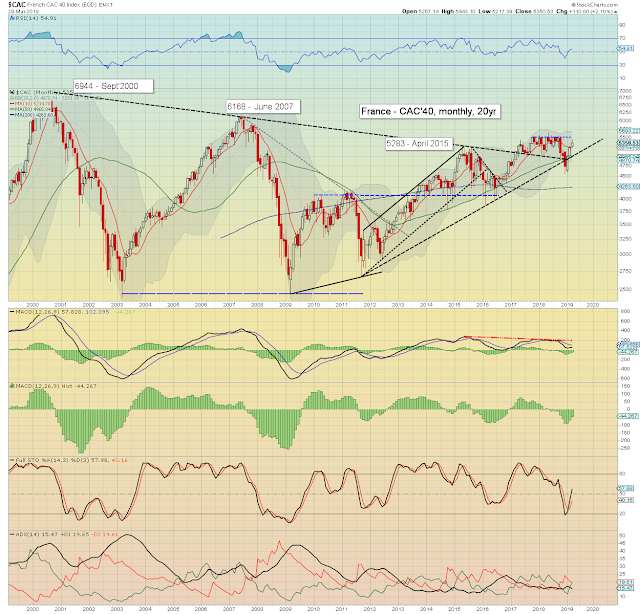 French equities climbed for a third month, settling +110pts (2.1%) to 5350. Whilst March price action was rather choppy, it was a clear settlement above the key 10MA. Things would turn very bullish >5500. No comment on the yellow vests. 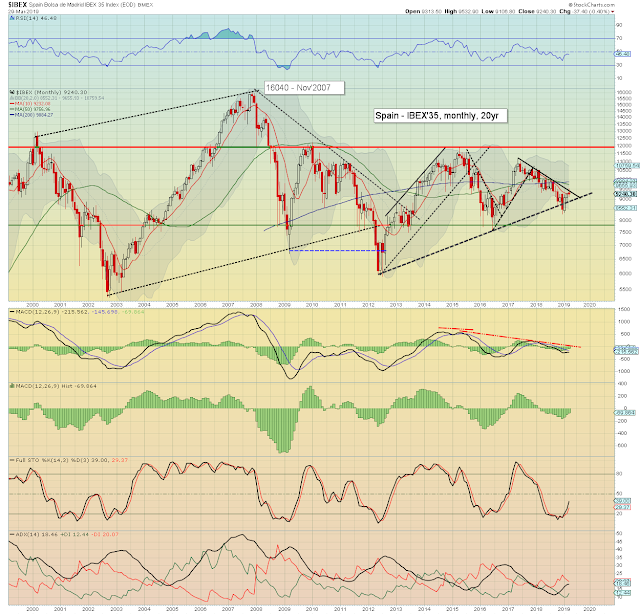 Spanish equities saw a failed attempt to break above m/t declining trend, settling -37pts (0.4%) to 9240, although this was a monthly settlement above the key 10MA. 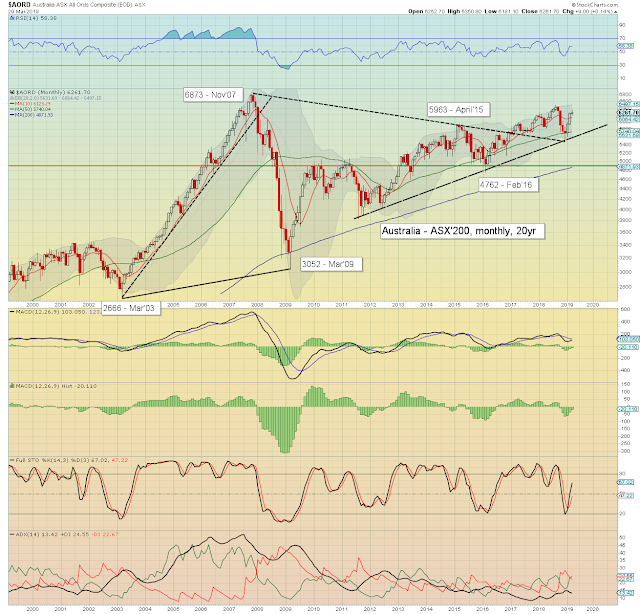 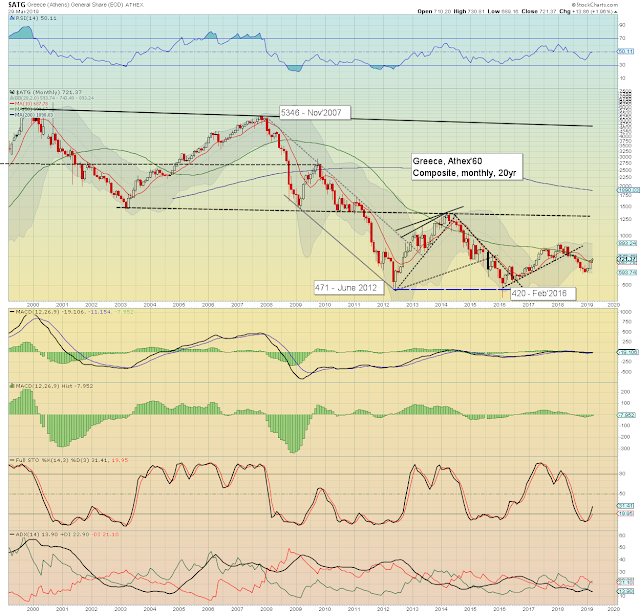 Seven markets were net higher, whilst three were net lower.

China and France lead the way upward, whilst Spain and Japan were lagging.

Eight markets settled above their monthly 10MA, the exceptions being Germany and Japan.
--

**there are a few fed officials scheduled next week, and Mr Market will be looking for any further rate comments.

***The BREXIT drama continues, with further Parliamentary 'indicative votes' due. As things are, the UK is scheduled for a no-deal/hard exit April 12th. However, there is increasing support for a 'People's vote', aka.. second referendum. If such a vote is held, the UK populace would choose to remain within the EU, by a margin of around 53/47.
--

Whilst the equity/econ' bulls can tout a broadly positive March and Q1, there are clearly some major issues out there.

The European economy is falling into recession, not helped via the geo-political BREXIT crisis in the UK. There is global weakening, which has already leaked into the US economy. The central banks are increasingly twitchy. The ECB and BoE have announced rates will not be raised for the remainder of the year. The Fed have announced an end date of September for QT.

World equities have clearly been juiced by increasingly dovish talk from the central banks, with threats of renewed monetary easing. Certainly, the US will fair better than almost anywhere else, but it won't be able to escape the next crisis... whether that is later this year, or more likely within 2020/21.

Yours, awaiting a rate cut... much like Kudlow, and an increasing number of others.
--

If you value my work, subscribe to me.
For details/latest offers: http://permabeardoomster.com/

*the next post on this page will likely appear by 5pm EDT on Monday.
Posted by Trading Sunset at 16:47:00
Email ThisBlogThis!Share to TwitterShare to FacebookShare to Pinterest
Newer Posts Older Posts Home
Subscribe to: Posts (Atom)