It was a mixed week for US equity indexes, with net weekly changes ranging from +1.6% (Transports), +0.6% (R2K), u/c (sp'500), to -0.1% (Dow). Near term outlook offers further chop, but eventual upside into the sp'2200s. More broadly, its a case of whether the market can battle through Sept/Oct' without falling back under the breakout levels. 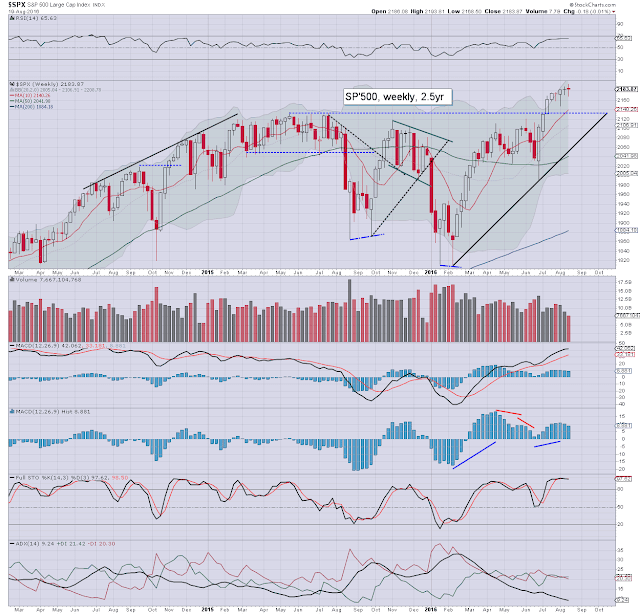 Effectively, a flat close on the week, settling at 2183. However, there was a notable new historic high of 2193, a mere 0.3% shy of the 2200s. Underlying MACD (blue bar histogram) ticked lower for a second week.

The breakout level of 2134 is now going to act as powerful support, and we also have the key 10MA lurking around the 2140s.

Equity bears have nothing to tout unless a break <2134, and more so... rising trend, which in early October will be around 2120. 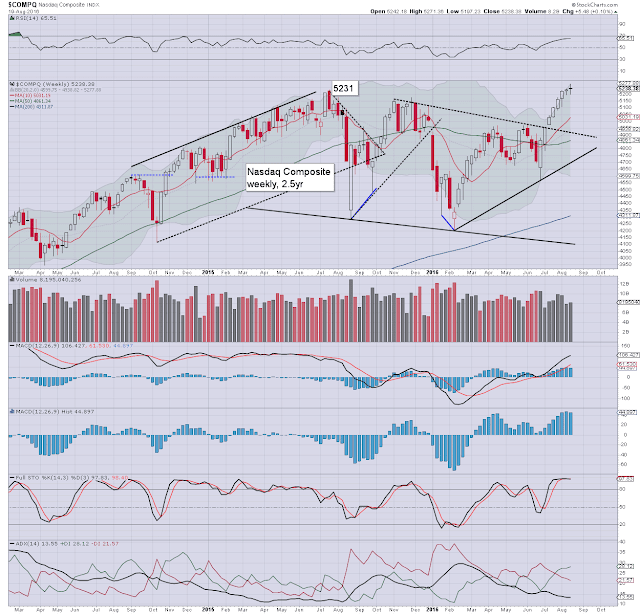 An eighth consecutive net weekly gain for the tech - the best run since spring 2010, having broken a new historic high of 5271. Core support is the 5000/4950 zone. The upper weekly bollinger will soon be offering the 5300s. Any monthly close - whether Aug/Sept/Oct in the 5300s will provisionally open the door to the 6000s by late spring 2017. Things only turn decisively bearish on any close <4900, and frankly, that looks extremely unlikely any time soon. 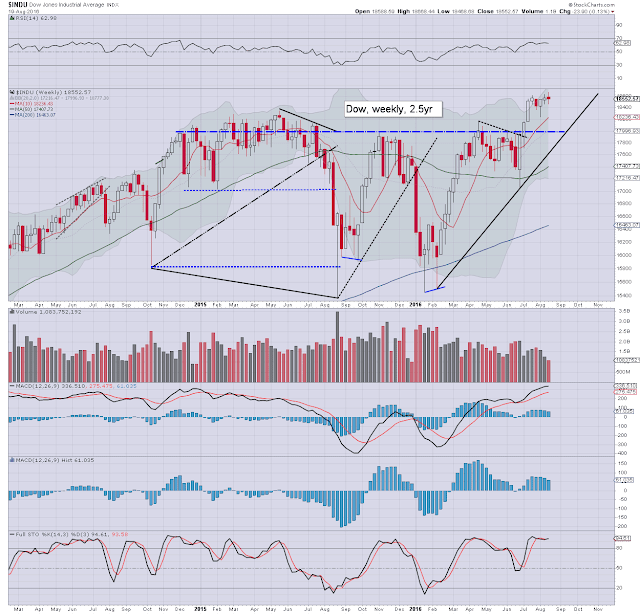 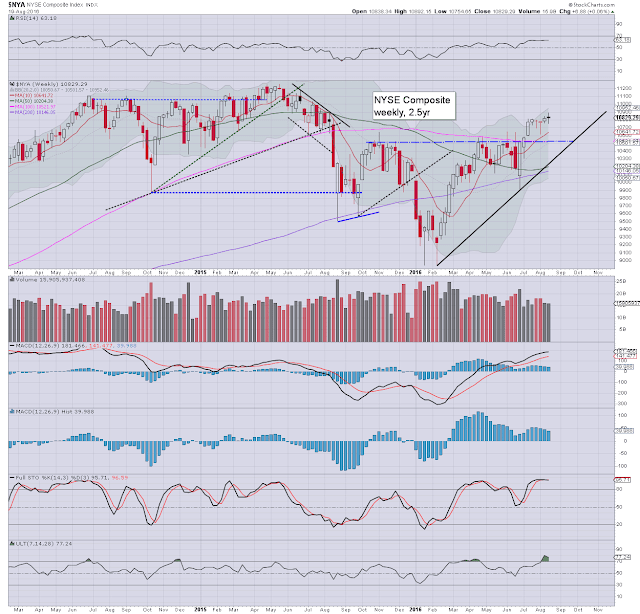 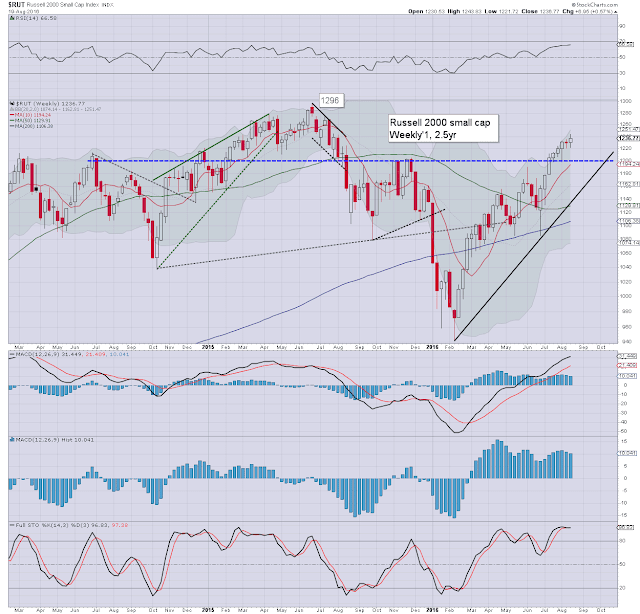 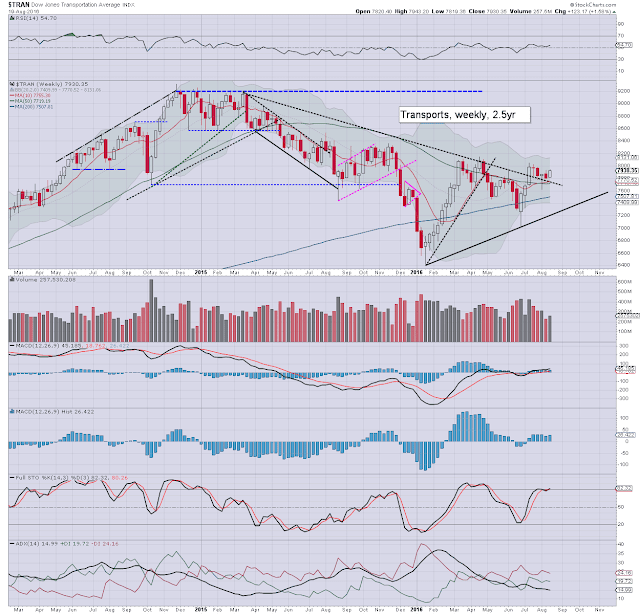 The 'old leader' - Trans, saw a sig' net weekly gain of 1.6%, settling at 7930. 8k remains strong resistance, but looks set to be broken.. and held above... by early September. From there, the 8300/400s. Even if the main market can remain broadly intact across the tricky Sept-Oct trading period, it will likely take the Transports another 5-6 months to challenge the Nov'2014 high of 9310.
--

A week of choppy price action, but with notable new historic highs for the sp'500, dow, and nasdaq.

*There will be a Monetary policy symposium at Jackson Hole in Wyoming. That will span across Thurs-Friday, with Yellen set to speak Fri' 11am.
--

If you have valued my postings across the last four years, please support me via a monthly subscription. That will give you access to my continuing intraday posts at my home of permabeardoomster.com 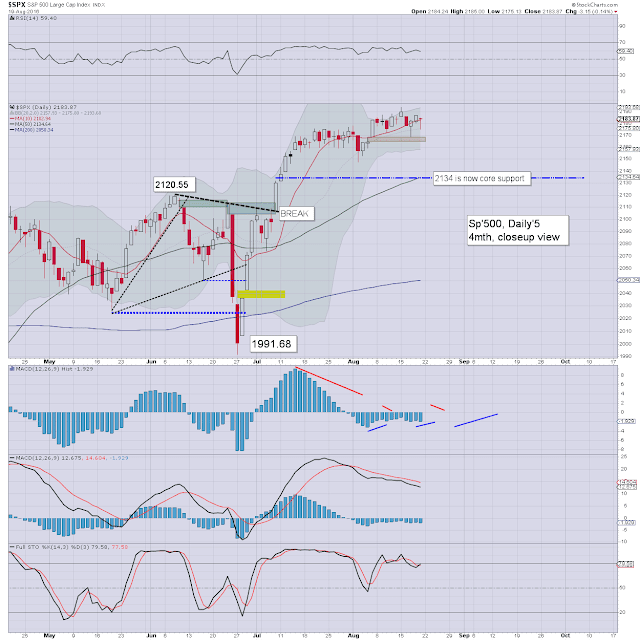 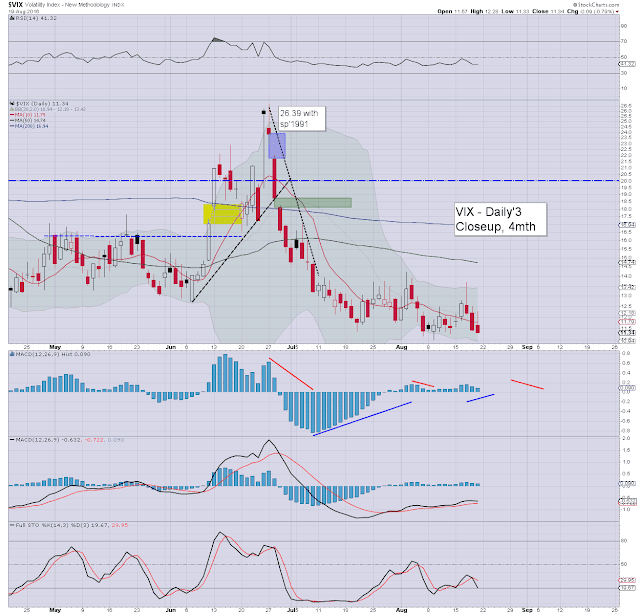 Opening moderate weakness... but as usual... the market saw some degree of latter day recovery. 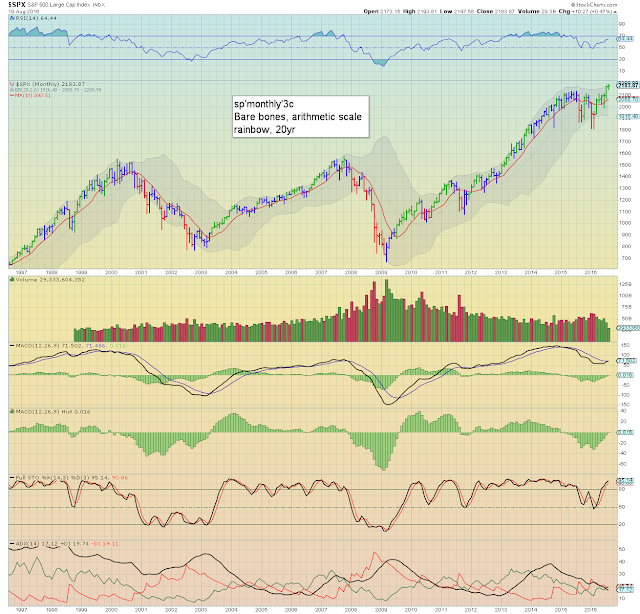 As things are, Aug' looks set to close bullish, with a sixth consecutive monthly green candle. Underlying MACD (green bar histogram) cycle is now positive, and could easily continue ticking higher all the way into spring 2017.

What should be clear, this market has very powerful underlying upside. There remain an increasing number of huge societal/economic problems, but hey... when hasn't that been the case on this third rock from the sun?

*the weekend post will appear Sat' 12pm, and will detail the US weekly indexes.
Posted by Trading Sunset at 00:00:00
Email ThisBlogThis!Share to TwitterShare to FacebookShare to Pinterest
Newer Posts Older Posts Home
Subscribe to: Posts (Atom)