Lets take our monthly look at ten of the world equity markets, with an emphasis at looking at the net yearly changes for 2014. 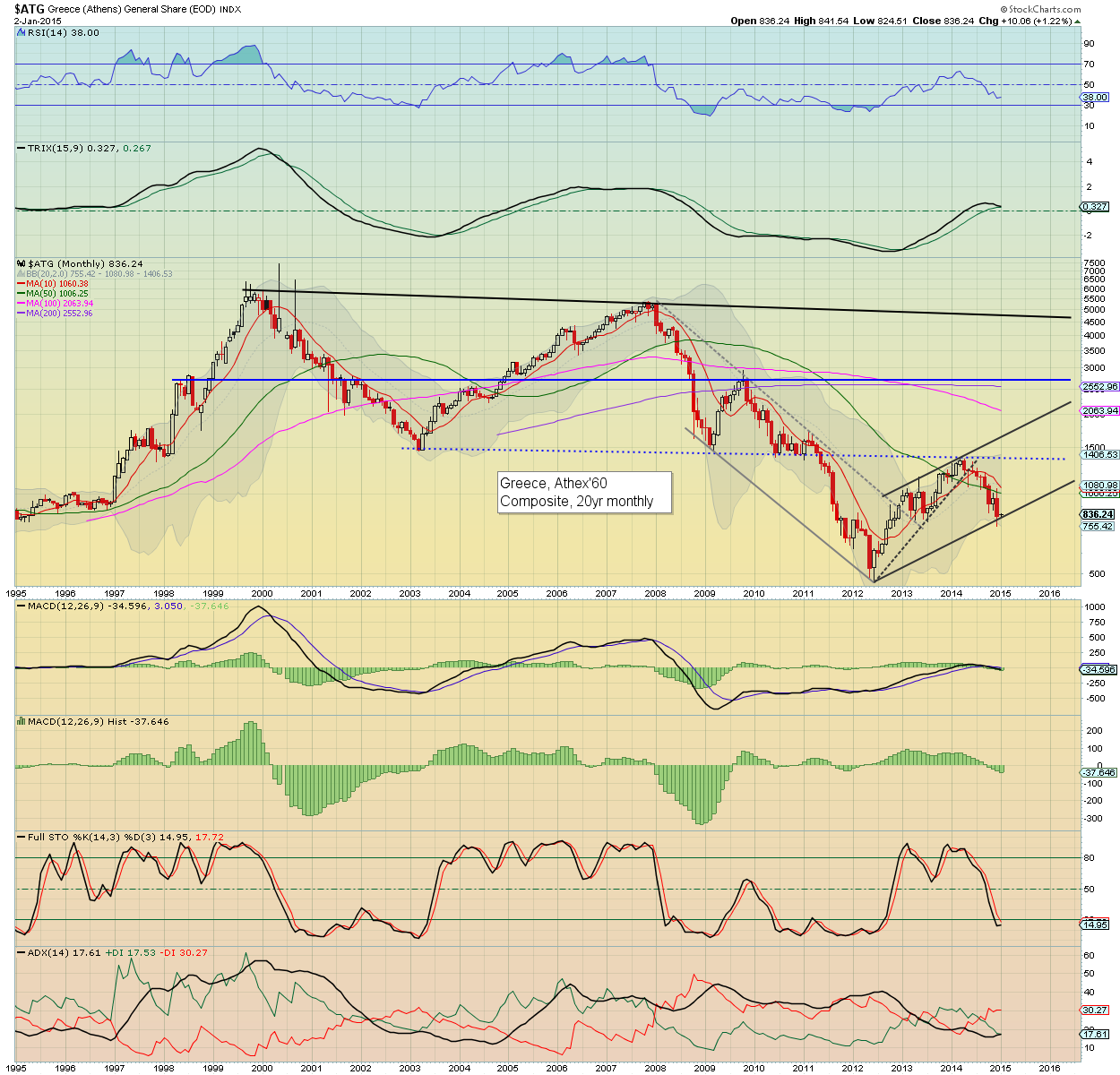 The Greek market saw a rather severe net yearly decline of -28.9%, and currently remains in a steep down trend since last spring. The 1400s remain key resistance. Best case for the Greek market is probably 2500, but with elections due in January.. there is high uncertainty. At some point the Greek govt will quit the Euro - via a classic 'Sunday night surprise' announcement. From there.. the Spanish, Portuguese, and perhaps even the Italians will follow, but that is probably a few years away. 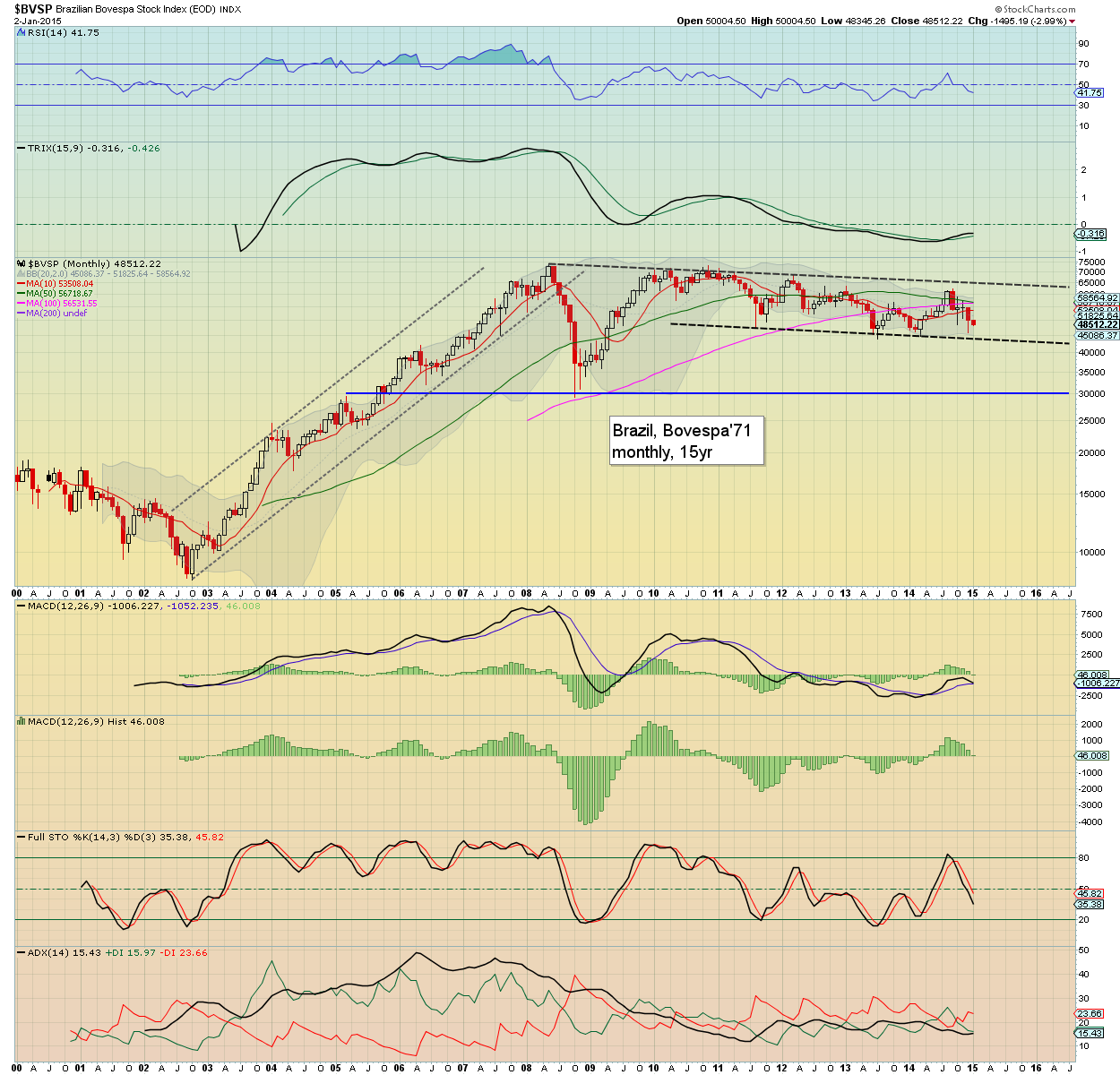 With weak commodity prices, the Brazilian market saw a net yearly decline of -2.9%. The Bovespa has now traded sideways for a full five years. Considering the other world markets.. a break to the upside seems more likely than down. 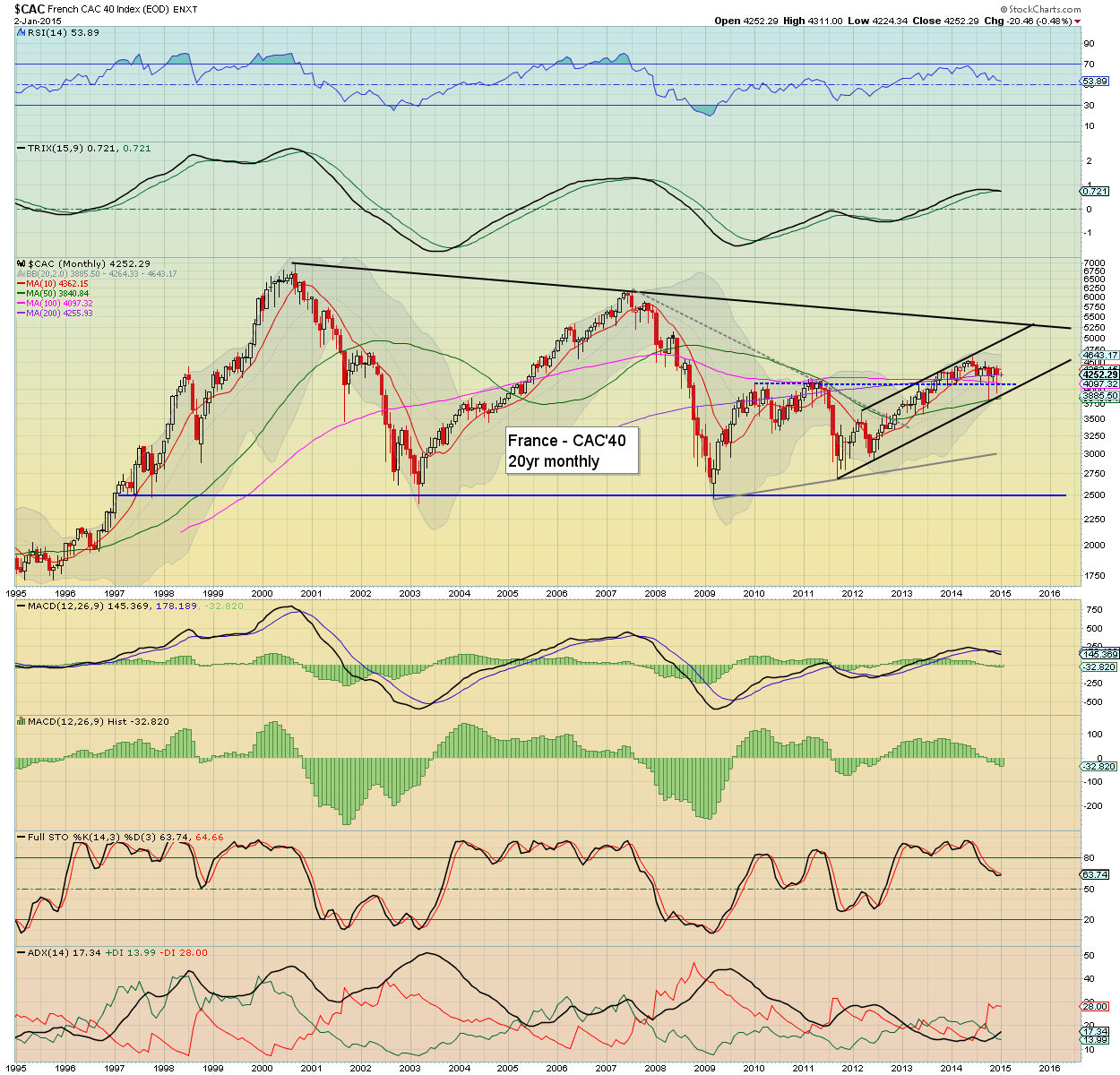 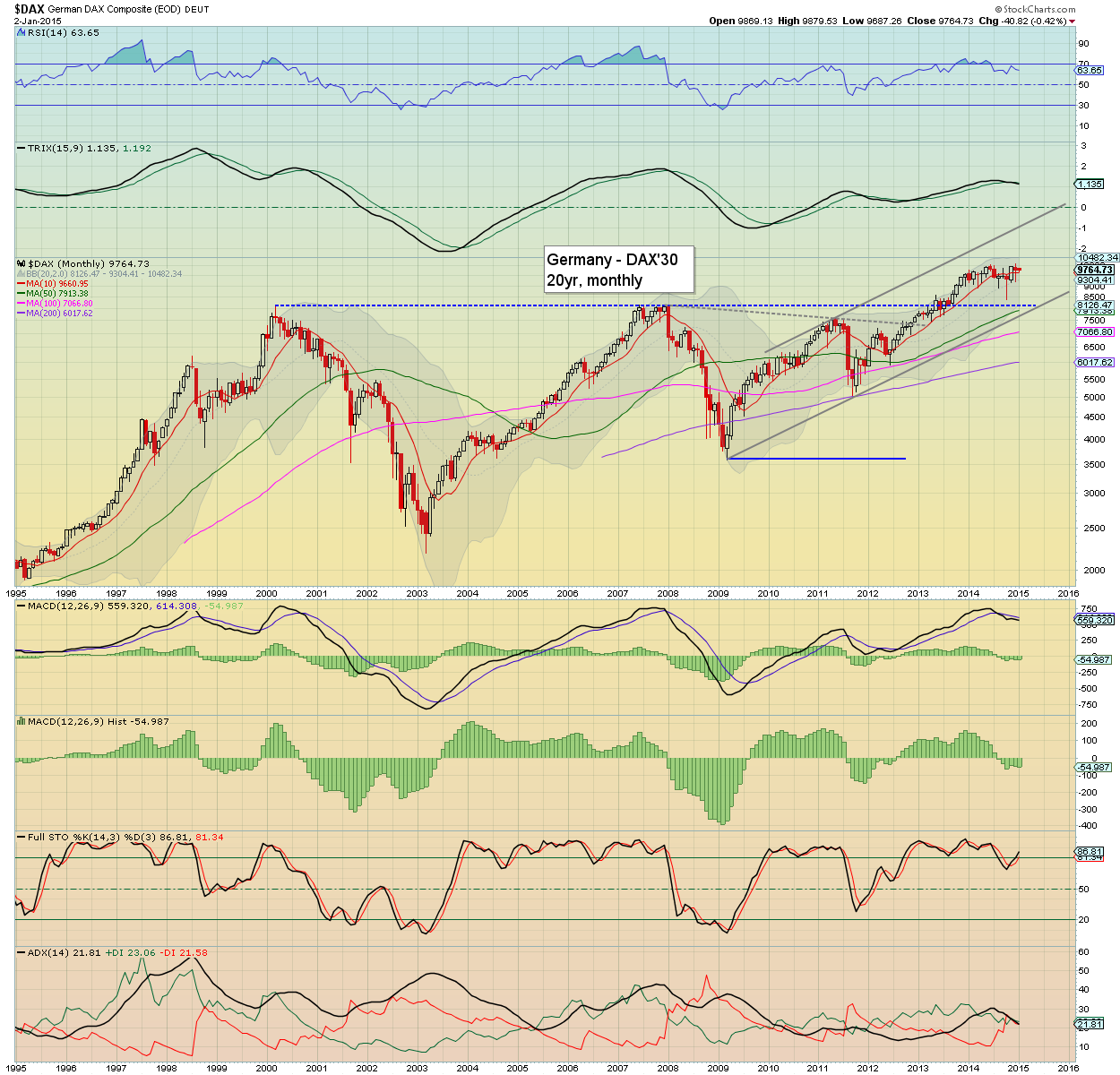 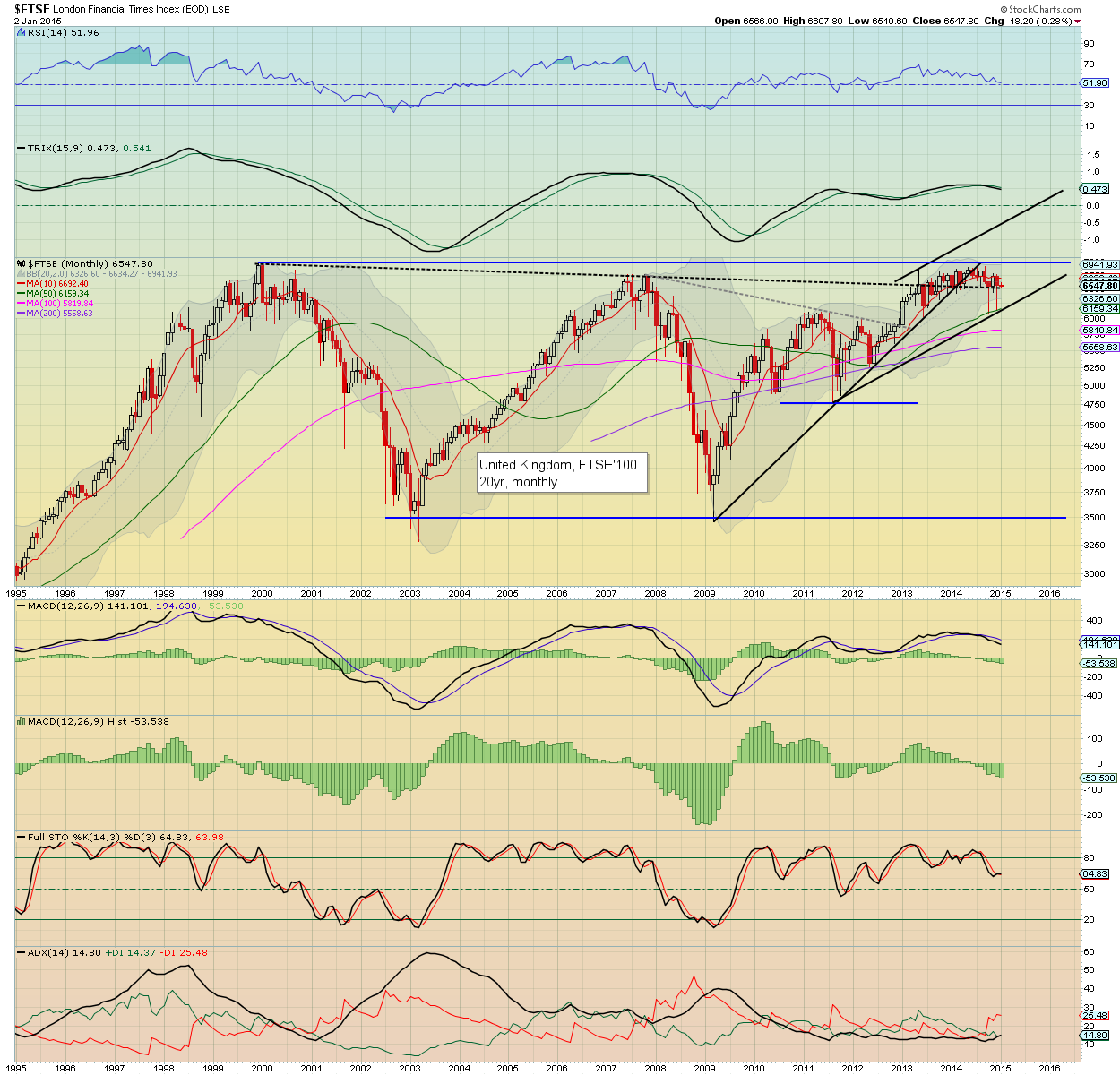 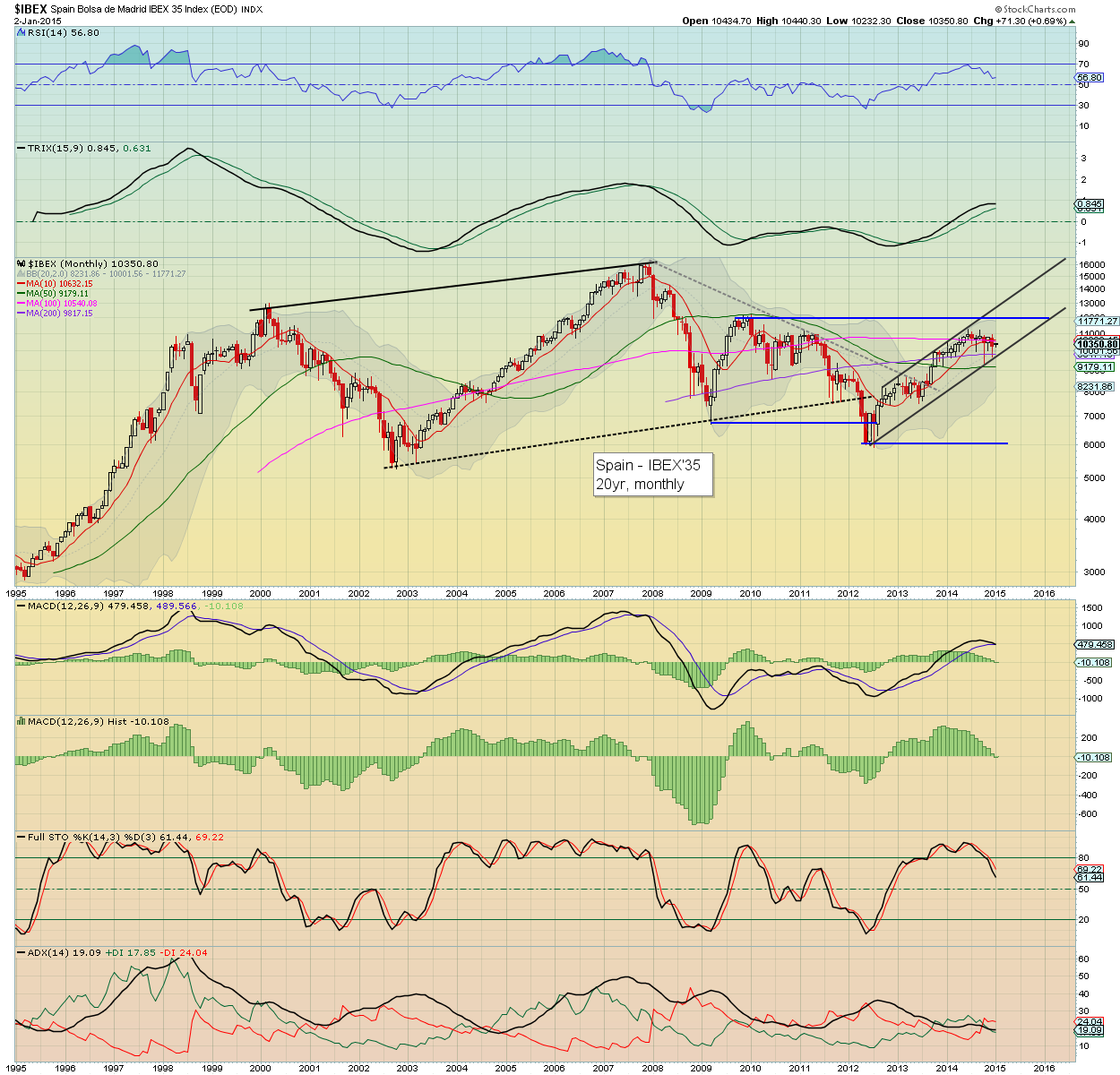 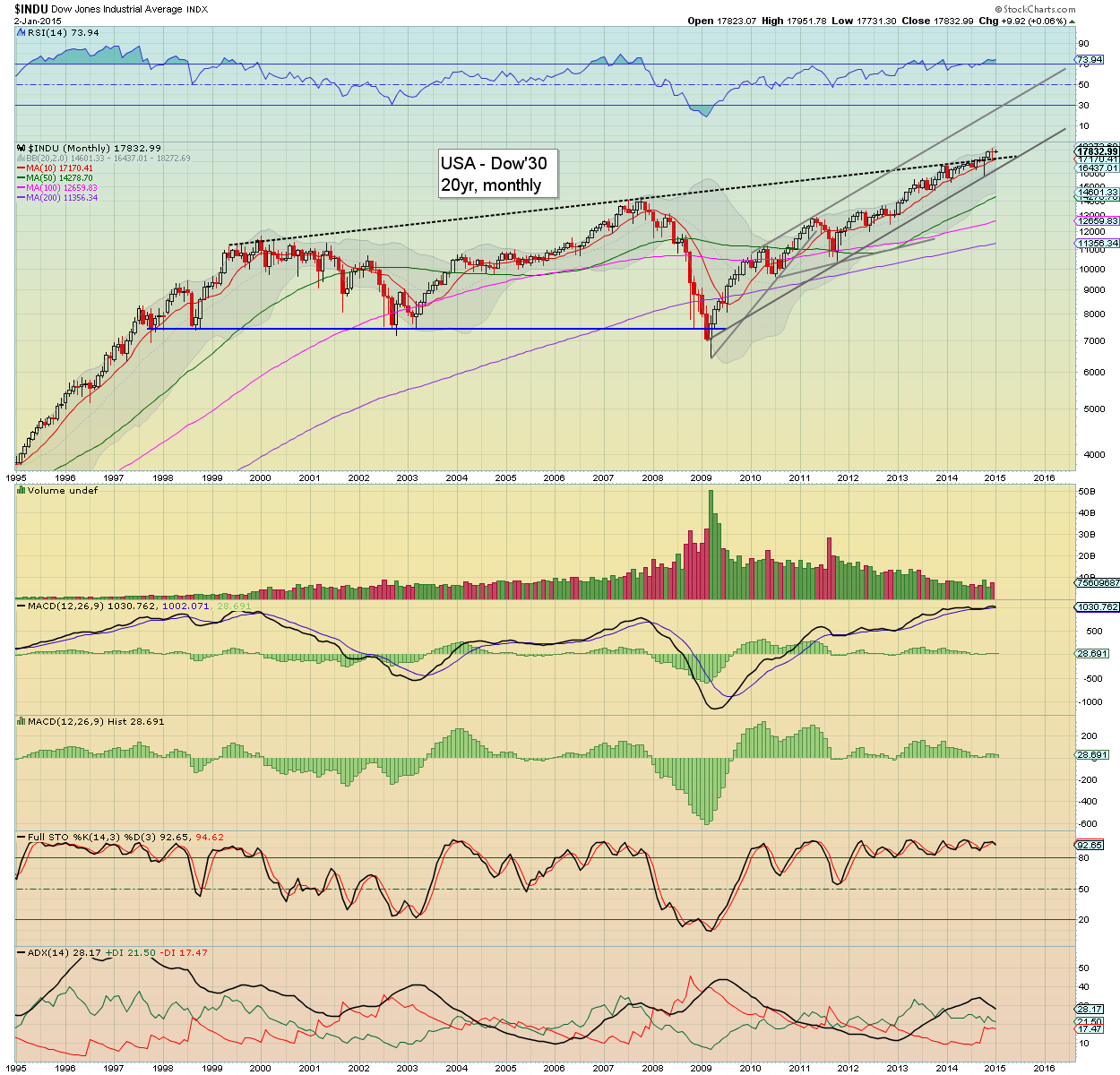 The mighty Dow saw a net yearly gain of 7.5%, a reasonable gain considering the previous five years. With the Dow recently breaking into the low 18000s, the next key level is the Fibonacci extrap' of 18974. After that... 20k... which seems viable by late spring.. along with sp'2300s.

Underlying MACD (green bar histogram) cycle remains only marginally positive, but then... it has been one hell of a rally since Oct'2011.. and it is entirely natural to see momentum turn broadly flat for some months. Dow 17k remains key support, as was again seen in mid December. On a giant multi-year perspective, the Dow is in the process of breaking 'up and away' to new historic highs... just like the German market. 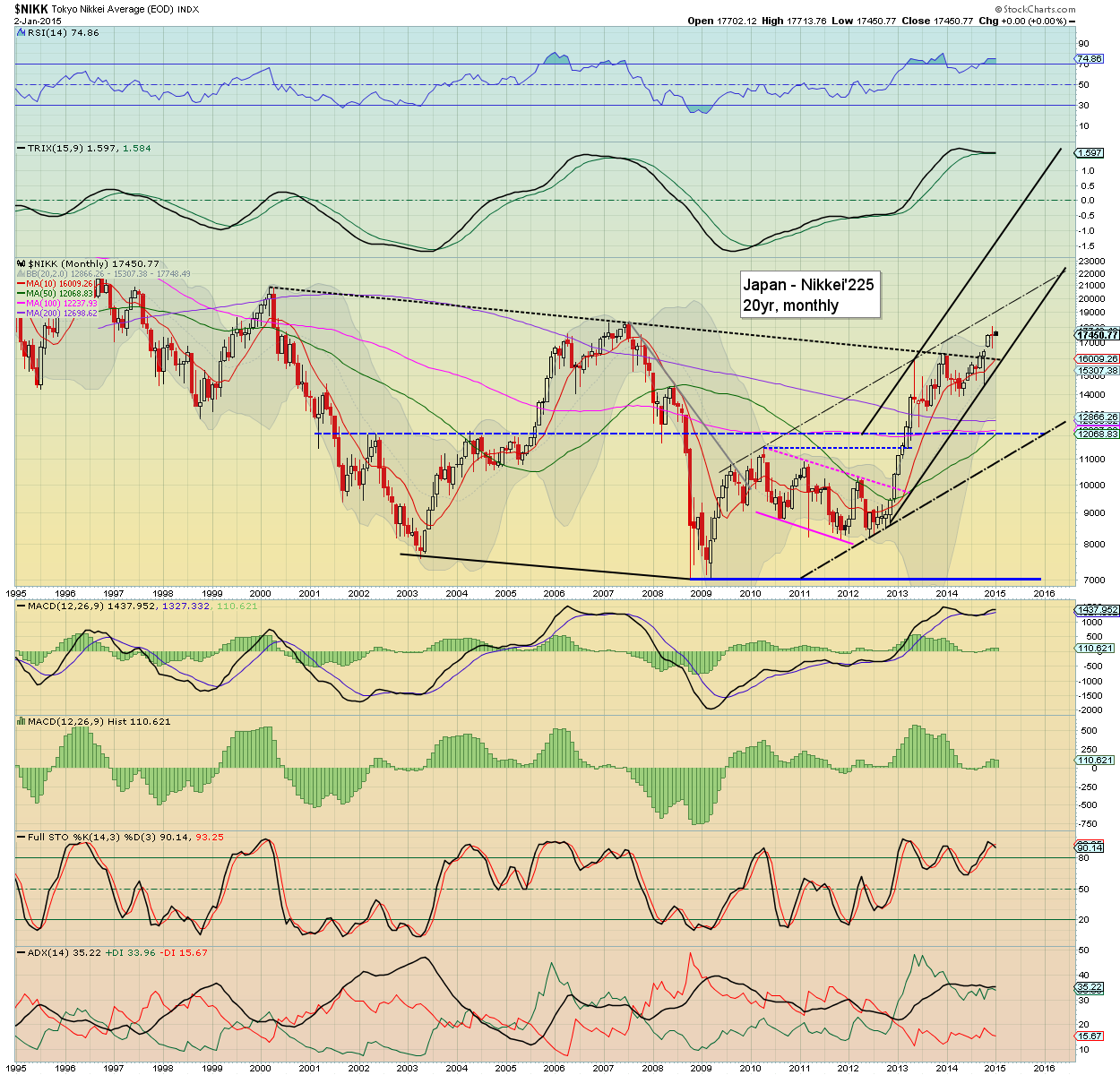 With the BoJ having a buy order for just about everything (even physical Gold?), the Nikkei managed a moderate yearly gain of 7.1%. There looks to be upside to the 20k level by mid 2015. An accelerated trend will offer 30k into early 2016. 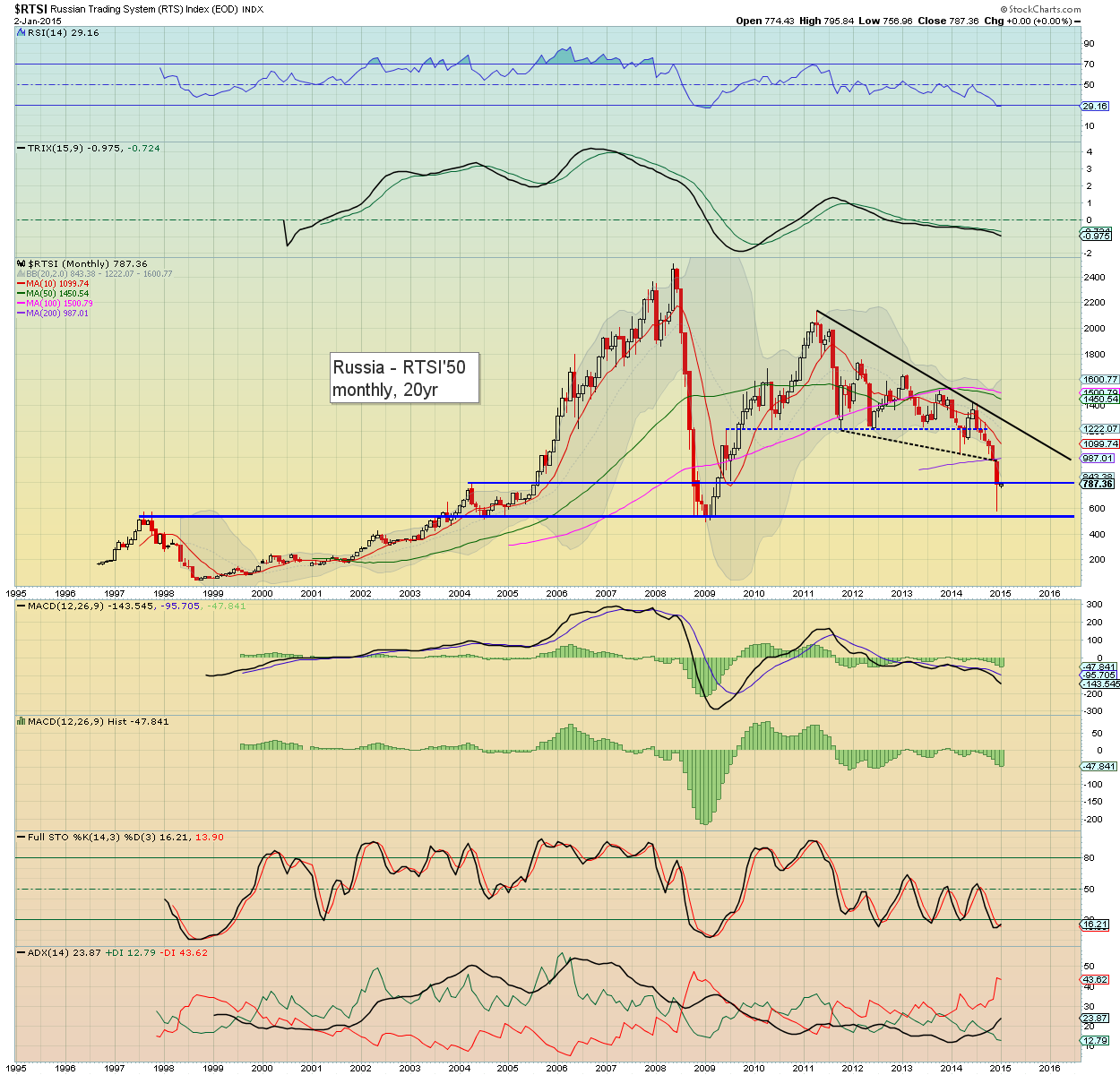 The Russian market remains in a broad downtrend from 2011. With energy prices having collapsed since the summer, the Russian market saw a net yearly decline of an extreme -45.4%. The recent spike low of 578 remains a viable key multi-year floor, but with Oil set to slip into the $40s.. or even 30s... there is a high chance that the mid 500s will be tested a few more times into the summer. 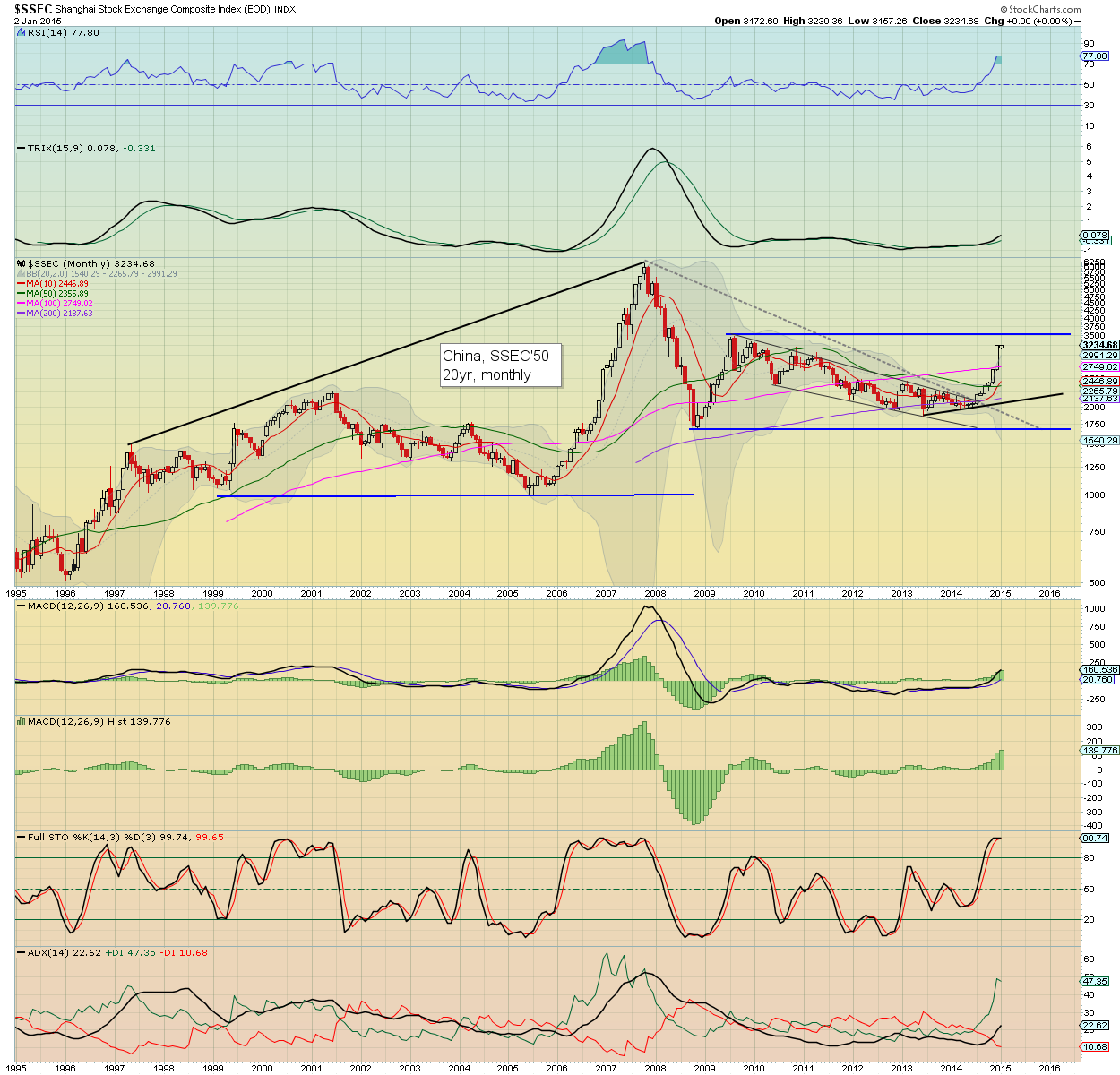 The Shanghai Comp' managed a monstrous yearly gain of 52.9%.. and is now very close to the first key level of 3500. Any monthly close in the 3600s will open up 5k.. which seems a very reasonable target by late 2016. Despite the periodic doom talk that China growth is slowing, the Chinese market is showing no such concern.

Without question, it was a very mixed year for world equity markets. Many of the EU markets remain well below their historic highs, whilst Germany and the USA are continuing to lead the way higher. The US and German economies remain the strongest of their respective regional trading area, and that looks set to remain the case for years to come.

The extreme weakness in Russia was starkly contrasted to a China market that has powerfully broken to the upside.

Taken as a collective, most world equity markets look set to climb across much, if not all of 2015. There will likely be notable laggards though.. of Greece, Brazil, and Russia.

The first full trading week of the year will be quite a busy one...

--
back at the Monday open :)
Posted by Trading Sunset at 17:00:00
Email ThisBlogThis!Share to TwitterShare to FacebookShare to Pinterest 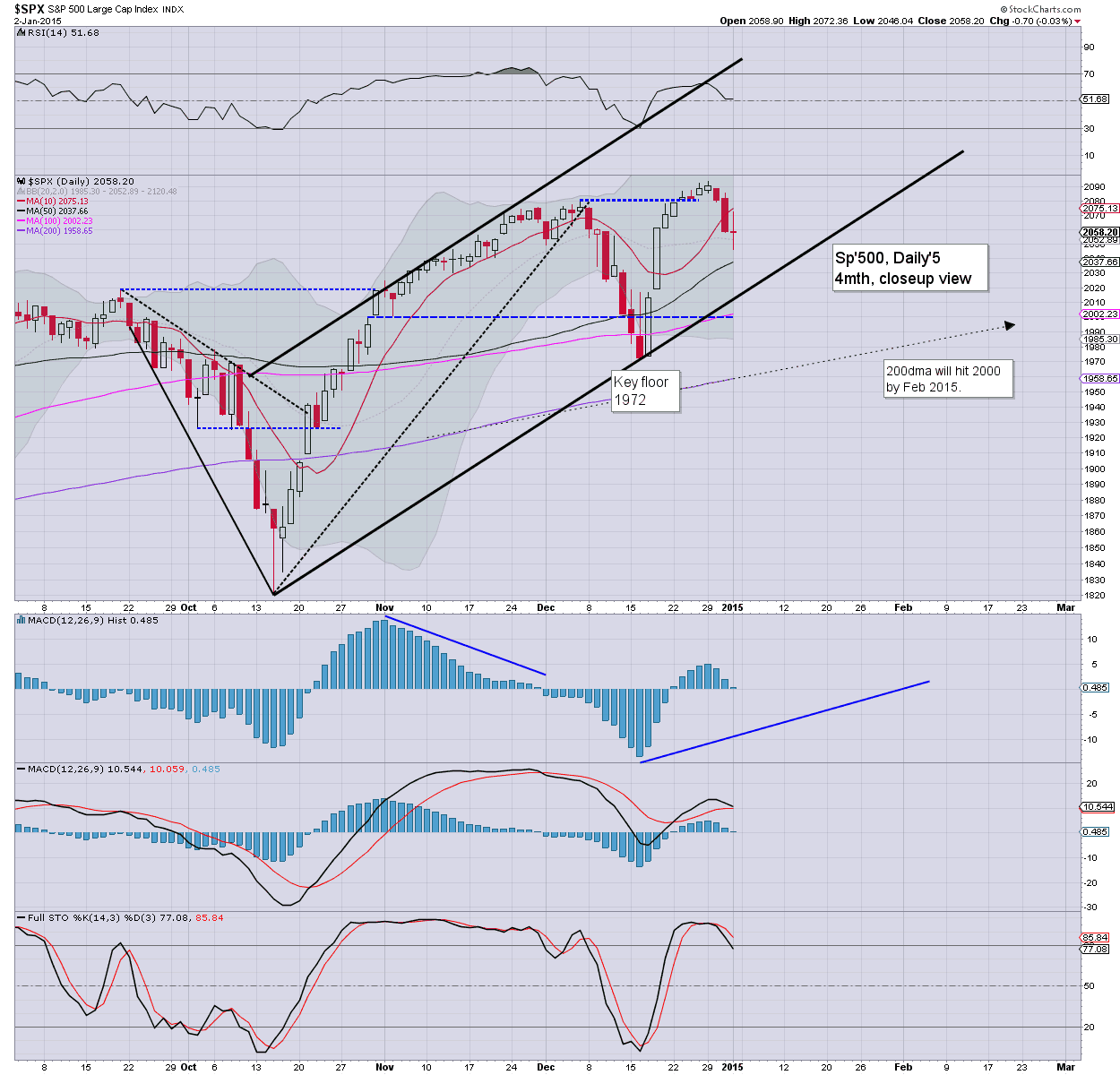 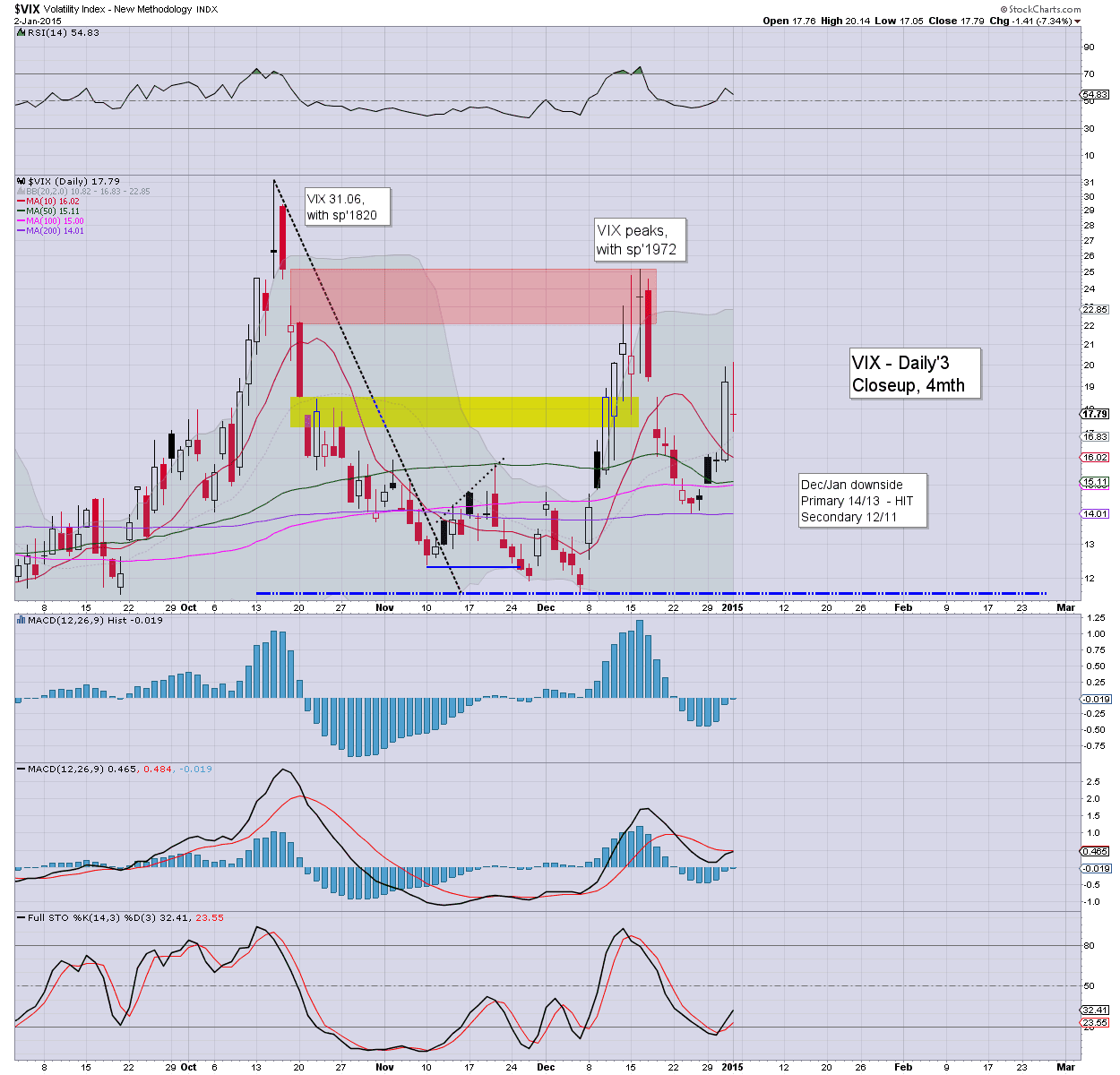 *the weekend post will be on the world monthly indexes
Posted by Trading Sunset at 01:00:00
Email ThisBlogThis!Share to TwitterShare to FacebookShare to Pinterest
Newer Posts Older Posts Home
Subscribe to: Posts (Atom)