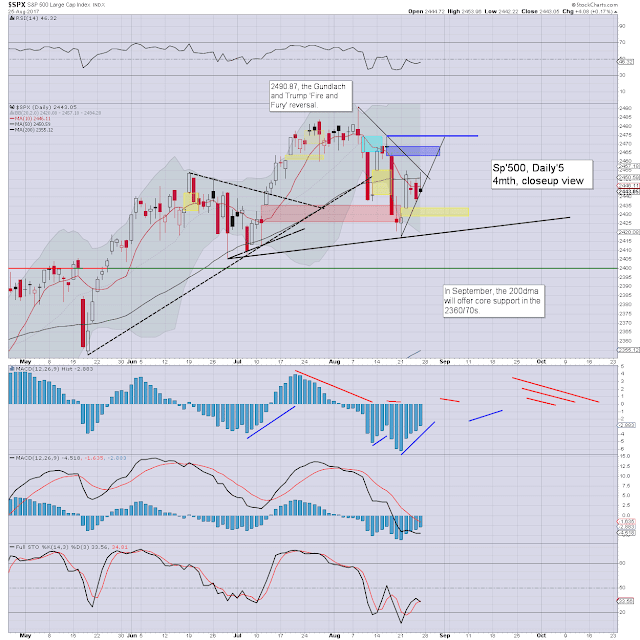 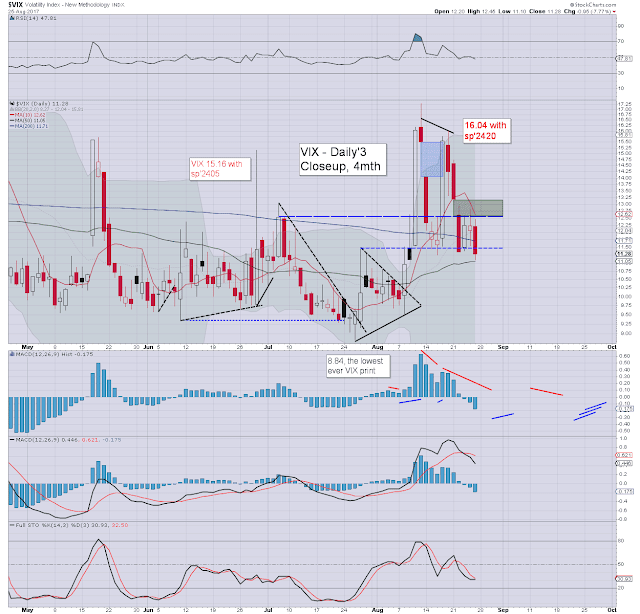 US equities opened moderately higher, pushed to sp'2453, saw some cooling, with renewed upside into the late afternoon. The closing hour saw a few swings as the market adjusted to 'Draghi' chatter from Jackson Hole. The settling black-fail candle leans bearish for early next week, but 2462 is a technical necessity. There is a low threat of first tagging 2433/28, before swinging upward to the 2460/70s.

Market volatility was itself a little choppy, but stayed negative across the day, settling in the low 11s.

Near term offers a minimum upside target of sp'2462, and that should now equate to VIX in the mid/low 10s.
--


Are the above three central bankers pictured above, not the most dangerous three people on the planet? Sure, they don't have direct access to the nuclear launch codes that Trump, Putin, or a few others have, but they have unlimited buying power, and their mere words can shift global capital markets within a single second.

I've an extensive academic background, and I can quite relate to the trio. I would be happy to have tea (I'd even pay) with either of these professional people. Yet, their actions across the years have done long lasting damage to the world capital markets, impacting almost everyone on the planet.

For instance, those prudent enough to 'save' (almost an alien concept these days) have been decimated. Unless such traditional savers have thrown almost everything at the equity market, they've seen their savings depreciate for almost a full decade. Even now, interest rates remain at extremely low levels, completely distorting global capital flows.

There is no doubt that the societal/financial historians of the 22nd century will look on these times in reflective horror. Students in the class room will say to their tutor 'so they thought printing more money would solve the underlying problems?'

Indeed, most should recognise that QE4 is coming... its just matter of when. Hell, did everyone already forget the fed published a study some months ago, noting that with the next recession, they will likely need to print another 2.5trn or so? Its not like even the fed are denying the printing will ever really stop. The inflationists look set to be proven right, its just taken many more years than most had ever imagined.
--

If you value my work, subscribe to me. For $20pcm, I typically provide 500 charts, 40,000 words across 200 posts each and every month. For details: https://permabeardoomster.blogspot.co.uk/p/subscriptions.html

--
*the weekend post will appear Sat'12pm, and will detail the US weekly indexes
Posted by Trading Sunset at 21:56:00
Email ThisBlogThis!Share to TwitterShare to FacebookShare to Pinterest
Newer Posts Older Posts Home
Subscribe to: Posts (Atom)