Despite the main indexes broadly closing a little lower, the VIX continues to slide, and settled -3.2% @ 13.16. Volatility looks set to decline into October, with VIX in the 12s..perhaps even the 11s. The big question now is whether VIX 20s are viable at all in the remainder of the year. 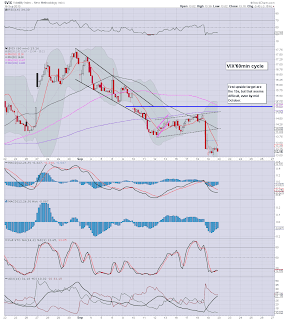 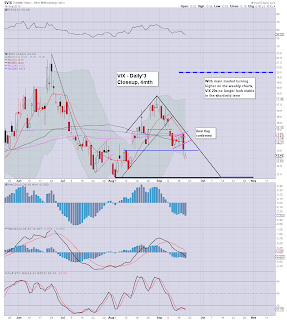 Part of the reason the VIX fell today - despite slightly lower equities, is doubtless because the uncertainty of the FOMC is now out of the way.

The daily candle was a reversal (hollow red) one, but still, I can't seriously consider that a floor indicator. Weekly equity charts look strongly bullish for next week, and I have to guess the VIX will remain at very low levels for some weeks..perhaps months to come.

For the volatility bulls out there, the next issue is whether the low from Aug'5 (11.83) will be taken out in the current down wave. Difficult to say, even if I knew where the indexes will be in mid October.

What is clear, this remains a fearless market, backed up...by the Fed. 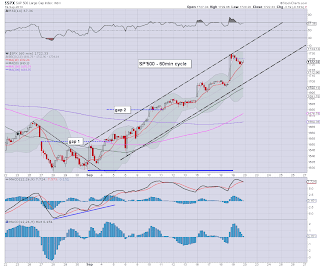 A much quieter day after the drama of the FOMC.

What is bemusing to see are bears calling for a major reversal from here. Why would we reverse, one day after a major breakout?

I have to follow the bigger weekly trends, which are still outright bullish.
--

*I remain on the sidelines, but will consider an index long in the sp'1714/12 zone, if the price action looks okay. Broad upside into the 1730s looks very likely next week.
--

The usual bits and pieces across the evening.
Posted by Trading Sunset at 21:01:00
Email ThisBlogThis!Share to TwitterShare to FacebookShare to Pinterest

The main indexes are generally holding minor declines, and a micro-snap <sp'1720 looks viable in the closing hour. Metals are holding flat, whilst Oil is -1.4%. Despite equity weakness, VIX is -1.9%. The bigger weekly chart looks very strong for next week. 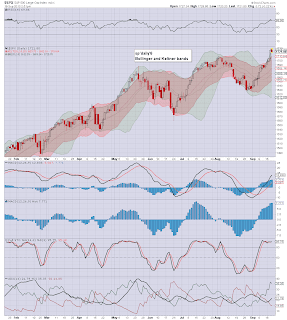 Without focusing on the smaller cycles too much, the daily chart is clearly trending upward, but we're in the twilight zone of over-stretched.

*I am on the sidelines, will look to go long tomorrow..if the price action looks okay. 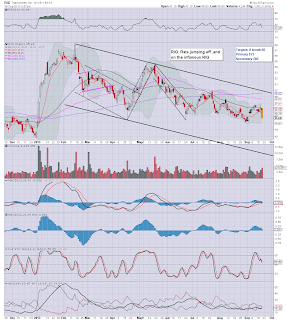 Things look on schedule. Minor low early tomorrow..then up..up. up,
Posted by Trading Sunset at 19:54:00
Email ThisBlogThis!Share to TwitterShare to FacebookShare to Pinterest

The main indexes remain a touch weak, and its not exactly a bold prediction to suggest a continuation into early tomorrow. Metals are seeing minor chop, although GDX now -4%. Oil is weak, -1.2%. Despite a weak market, the VIX is still lower by almost 3% 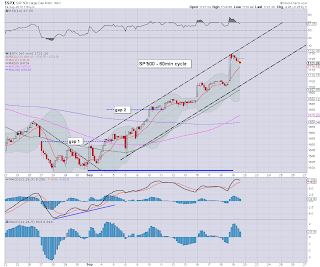 The rising hourly 10MA @ 1718 should provide support into the Thursday close, although I'm guessing a further little wash-out early tomorrow.

The only issue then, can I stomach going long, from a level that would still be considerably above Wednesday morning?

One thing is for sure though, I won't be picking up any index-shorts.
-

*for those few watching, clown finance TV channel'2 (CNBC) continues to report Gold +$60 today. Even one of the lunch time hosts was noting 'such a strong move today'.

At least they are consistent in their idiocy, and mis-reporting.
-- 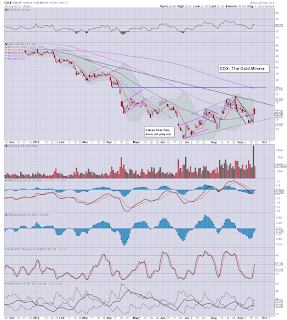 Currently testing the 50day MA in the low 27s..which would make for a near 50% retrace of yesterday
-

Hmm
Posted by Trading Sunset at 18:54:00
Email ThisBlogThis!Share to TwitterShare to FacebookShare to Pinterest

The market looks set for further minor weakness into early Friday, with sp'1715/10. Miners are especially weak, GDX -2.9%, although the metals remain a touch higher. Oil is also on the slide..-1.1%. Broader trend remains to the upside though. 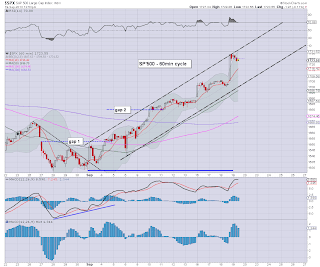 By late Friday, sp'1710 will be trend/channel support, and frankly any talk of sub 1700s should be dismissed as crazy talk in the immediate term.

Any bears still looking for much lower levels...go stare at the following chart for the next hour... 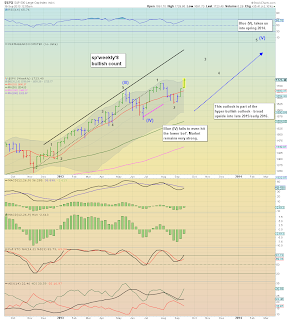 Which direction are we still 'broadly' heading in?

It ain't down..is it?
Posted by Trading Sunset at 17:57:00
Email ThisBlogThis!Share to TwitterShare to FacebookShare to Pinterest

The main indexes are continuing to weaken, but equity bears can't get lured into renewed hope. The break above sp'1709 was very significant, and much higher levels are likely. The current minor down cycle will likely continue into early Friday. 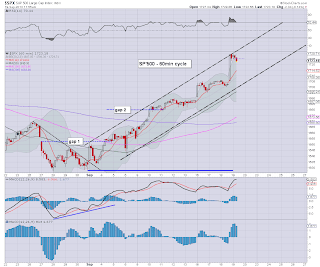 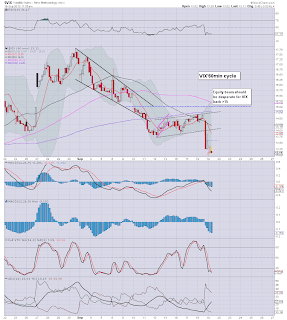 *note how the VIX is still lower, despite a somewhat weak market.
--

A fearless market..one built on a giant lie...but still...the majority are still falling for it.
-

I'll consider an index long in the sp'1715/10 zone, but not until early tomorrow..and even then....why go long ahead of the weekend? Hmm

time for lunch
Posted by Trading Sunset at 16:57:00
Email ThisBlogThis!Share to TwitterShare to FacebookShare to Pinterest

11am update - market cooling down

Both equities and commodities are in a simple cooling phase, which will likely last into the weekend. A minor decline to sp'1715/10 is viable, before another surge across next week. Despite a touch of equity weakness, VIX is lower, -2.8%..and a weekly close in the 12s looks very possible. 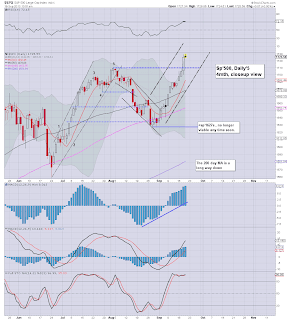 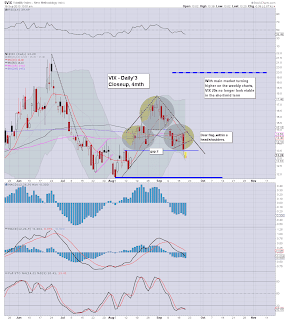 GDX now -1.2%, but that is a very small retracement after yesterdays 9% gain.
Posted by Trading Sunset at 15:53:00
Email ThisBlogThis!Share to TwitterShare to FacebookShare to Pinterest

10am update - due a small down cycle

The main market opens moderately higher, but there is clearly some selling starting to appear. The monthly and weekly charts look disturbingly strong, even a fall back to sp'1715/10 will do nothing to negate yesterdays break. 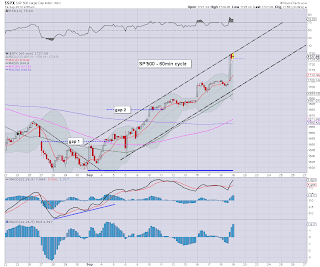 Best downside case for the bears looks to be 1715 by early tomorrow...but hey..that will be difficult.

Today has $3bn of QE, and underlying momentum is so strongly to the upside, any pull backs are going to be very minor.
--

VIX is offering a reversal candle on the daily/hourly charts 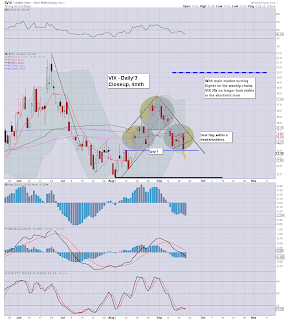 But considering the bigger equity charts, its to be dismissed.
Posted by Trading Sunset at 14:57:00
Email ThisBlogThis!Share to TwitterShare to FacebookShare to Pinterest

Good morning. Futures are moderately higher, sp +4.5pts, we're set to open around 1730. Precious metals and Oil are both broadly flat. USD is a touch lower. After strong Wednesday gains, bulls can sustain any move back down to 1710 without any real trouble. Bears....can forget it. 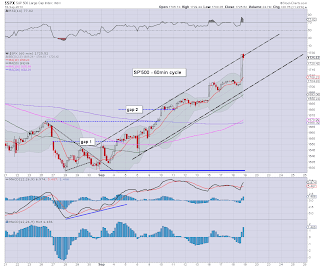 So, we're set to open a little higher, nothing dramatic, but still...anyone hoping for a major reversal today, tomorrow..or next week is surely going to be seriously disappointed.

Market clearly BROKE out yesterday, and we're probably looking at 1750/75s within the next few weeks.

The only issue is what then. Considering the past few years..and QE continuing at maximum, I can only assume we'll battle up into the spring.

What am I doing?

I'm on the sidelines, having avoided being smashed to pieces by the FOMC. Frankly..its been a tough week, I probably won't be getting involved until next week, and that will be on the long side.
Posted by Trading Sunset at 13:43:00
Email ThisBlogThis!Share to TwitterShare to FacebookShare to Pinterest

With the Fed deciding to maintain QE at $85bn, there is now some clarity about the bigger picture. Market looks set for the sp'1750/75 zone in October. The only issue is whether the market can keep pushing higher into spring 2014, with sp'2000s. 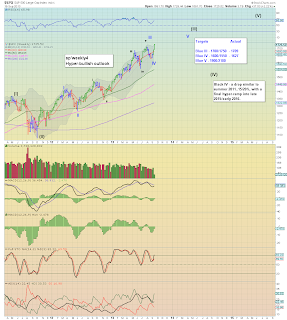 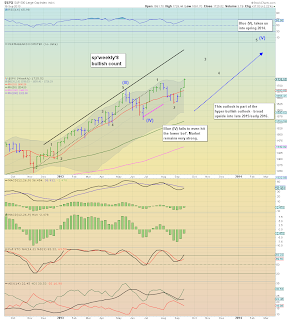 Without question, another fiercely nasty day for the bears.

Yet, even yours truly noticed that from a purely technical/chart perspective, today looked a lousy set up for the bears. All of the smaller cycles appeared floored on their respective MACD cycles, and I sure wasn't going to get involved on a 'fed day'.

The daily index closes were extremely bullish, and with the weekly charts offering massive potential for another few weeks at least, the sp'1750/75 zone looks an easy target for October.

The only issue now, is whether the market gets upset by anything in Oct/November...or just keeps on battling higher all the way into spring 2014.

By that time, the sp' would surely be in the 2000s. An incredibly disturbing thought, but it is something I've been keeping in mind for many months.

The following outlook is about as crazy as anyone could come up with, not least a self-titled permabear 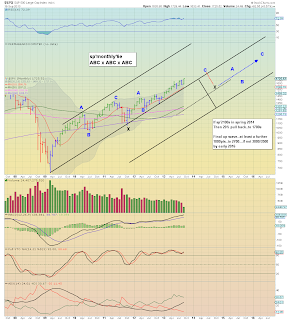 Broadly, this would call for 'general' gains into next spring, before a 20% pull back - analogous to that seen in 2011. There would then be a final wave from late 2014 into 2015...perhaps into spring 2016, where the main indexes would rally at least 50%..perhaps even double up in an insane blow off top.


The USD - breaking (badly) down

With QE continuing in full, the USD was smacked over 1% lower today, and today's fall makes for a decisive break on the monthly charts. It will only need a little further weakness across tomorrow/Friday to break the big 80 threshold..and that will really start to get some concerned. 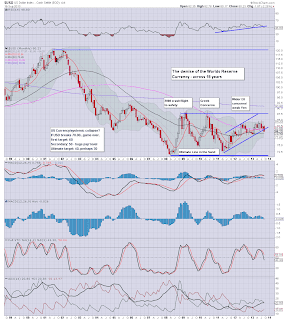 Even if the USD can rebound across the rest of the month, that is a pretty significant break of trend/channel, and bodes badly for the rest of 2013. Of course, a lower USD will help kick equities and most other dollar denominated assets to the upside.

There is an array of econ-data tomorrow, inc. Jobless claims, phil fed survey, and leading indicators. Market should be able to cope, even if some of those come in a touch disappointing.

*I remain on the sidelines, having avoided today's carnage, and will not be shorting the indexes for some weeks, if not months to come. Indeed, I will be looking for something to go long, perhaps a sector ETF, or even Oil.
-

The main indexes soared after the Fed announced it will be maintaining QE at $85bn a month. The sp +20pts @ 1725, a decisive 16pts above the recent high. The two leaders - Trans/R2K, closed +1.5% and 1.0% respectively. Outlook into October looks extremely bullish. 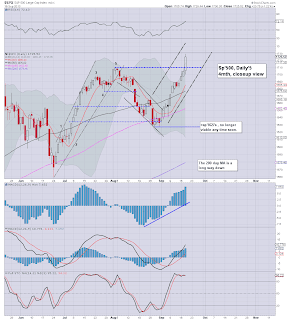 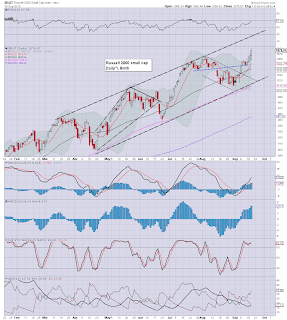 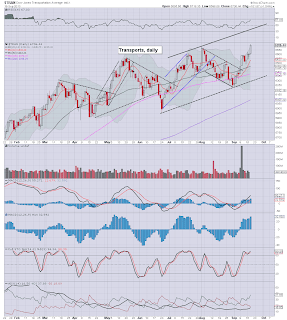 Well, the daily closes on all the indexes was extremely bullish, not just for the rest of this week, or month.. but surely also into October..and possibly....even all the way into spring 2014.

Yes, there are 'issues' out there, but with QE continuing, the market is going to be able to battle 'broadly higher' for months to come.

Lets be clear, the hyper-bullish outlook which I posted many months ago..is still on schedule - to my own dismay.

*I remain on the sidelines, and have no intention of launching any index shorts for weeks..if not months.
--