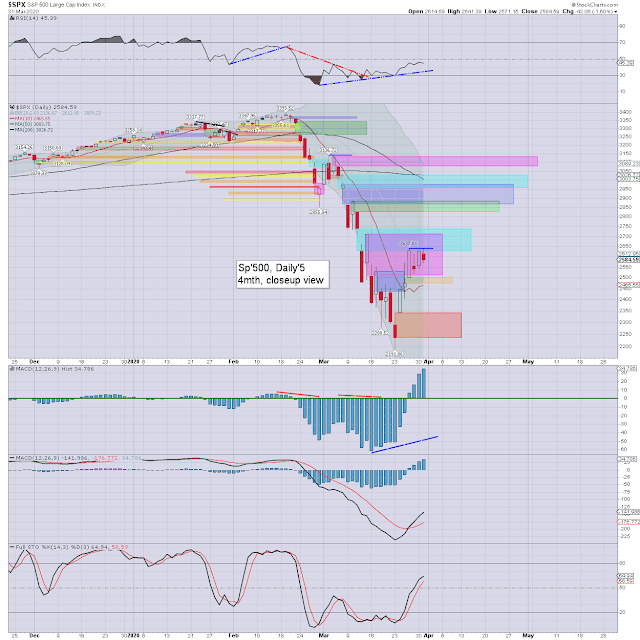 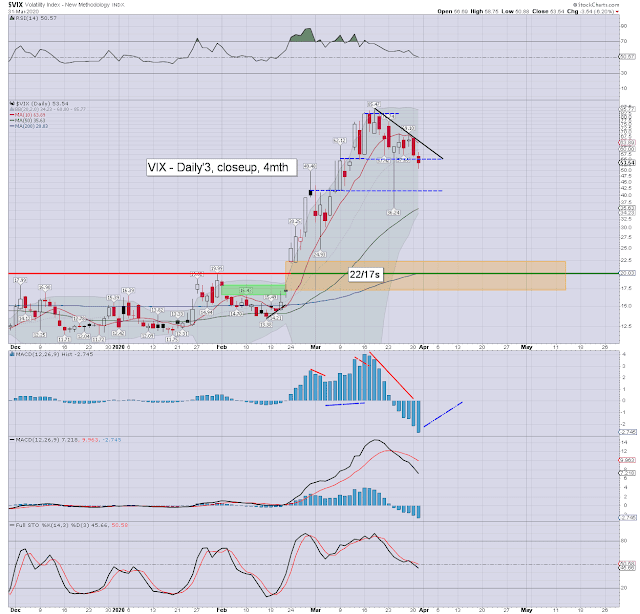 US equities opened a little weak to 2592, but swung upward to break a fractional new cycle high of 2641. Meanwhile...

So... if that is eventually agreed, the Fed will no doubt be buying (if indirectly) another $2trn of bonds. If you think that is a valid solution to the current economic depression, I got a bridge that spans the Atlantic ocean I can sell you.

The afternoon saw renewed weakness, with the market ending the month/Q1 on a pretty weak note. Volatility was in cooling mode, with the VIX settling -6.2% to 53.54.

Despite a seven day swing from 2191 to 2641, it was unquestionably a fiercely bearish March, as February's bearish engulfing candle played out. 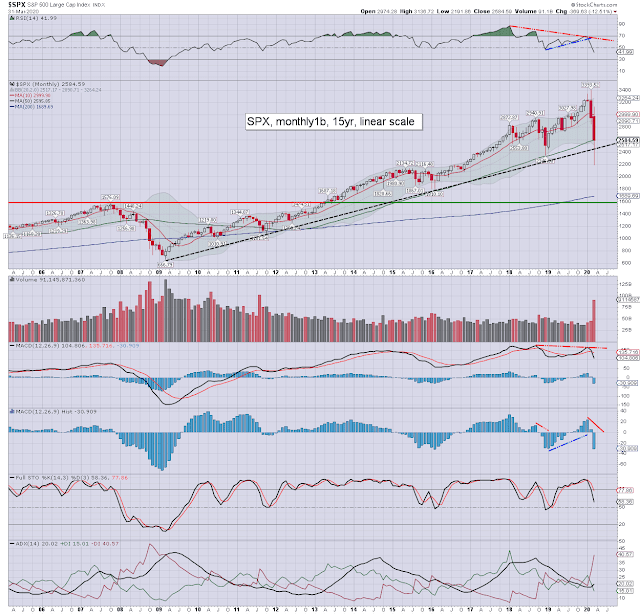 Posted by Trading Sunset at 21:20:00
Email ThisBlogThis!Share to TwitterShare to FacebookShare to Pinterest

Peter Schiff has the high ground 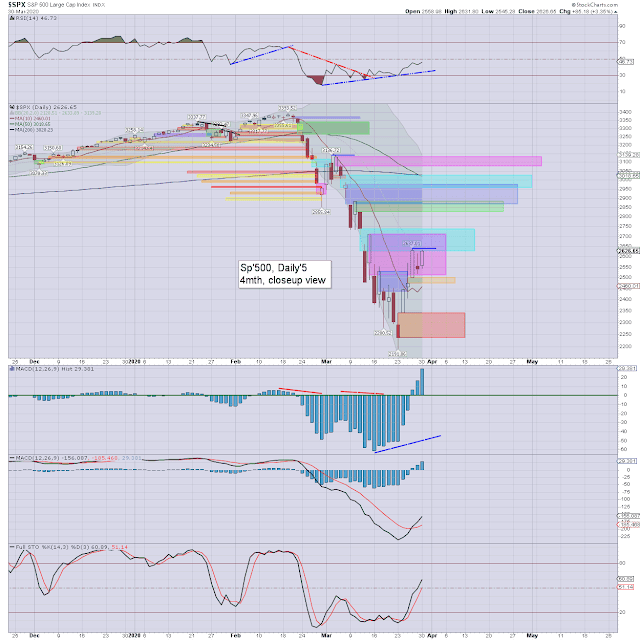 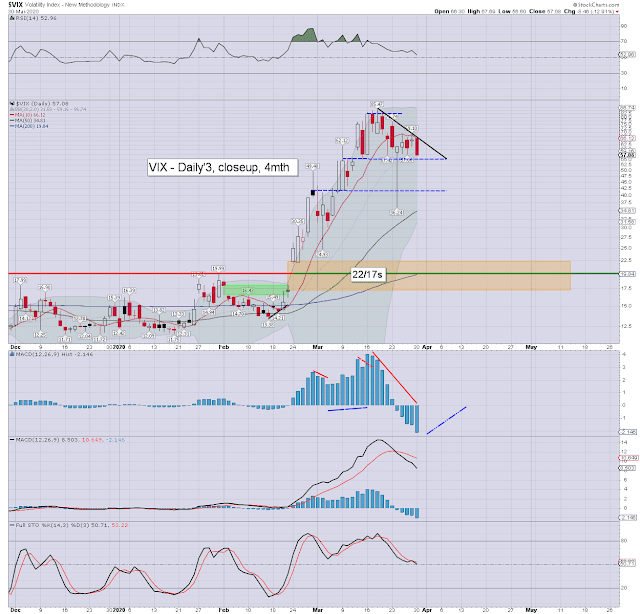 US equities opened choppy, leaning on the upward side, but the gains were shaky, with a few indexes briefly turning red, and then resuming upward.


The afternoon saw considerable chop, but leaning upward to print sp'2631 in the closing hour. Volatility remains extremely high, with the VIX settling -12.9% at 57.08.

As for the Corona, much of everything I expected is coming to pass. Here in the UK, the lockdown is now expected to continue into May... if not June. There is even talk of 'social distancing measures' to extend into 2021.

For now, I'll merely suggest you listen to the following from Denniger. Its the best 13mins and 45 seconds of audio so far this year.

Peter Schiff has the high ground

Of the many Star Wars memes, 'Peter Schiff has the high ground' came to mind.

I guess you could also say... he was the chosen one.

ps. Its safe to assume Youtube (via Comcast or Sony) will pull this video sooner, rather than later. Download a copy!
-- 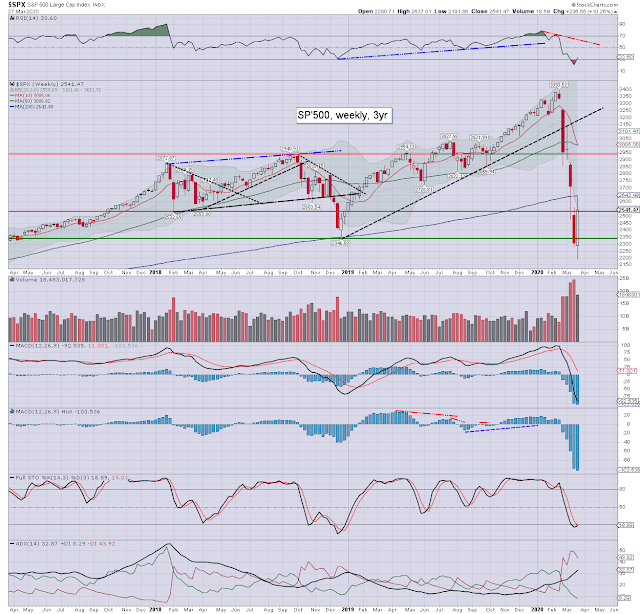 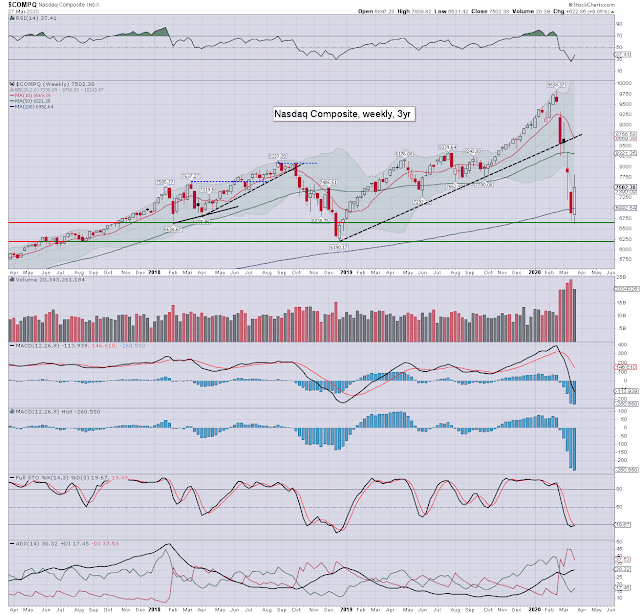 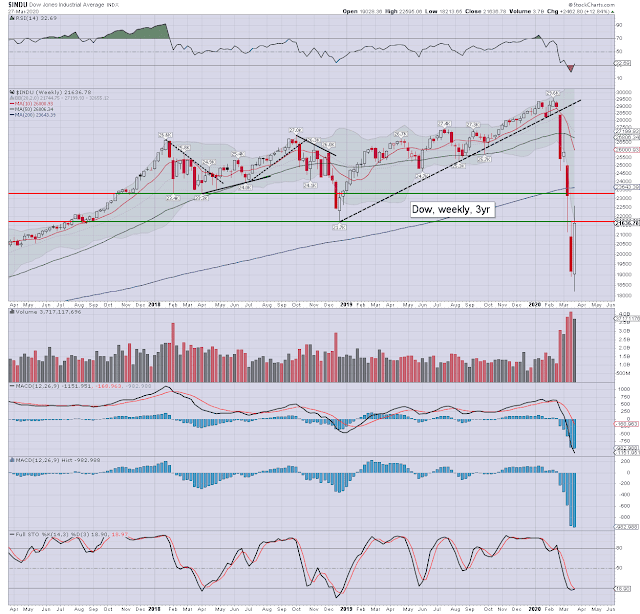 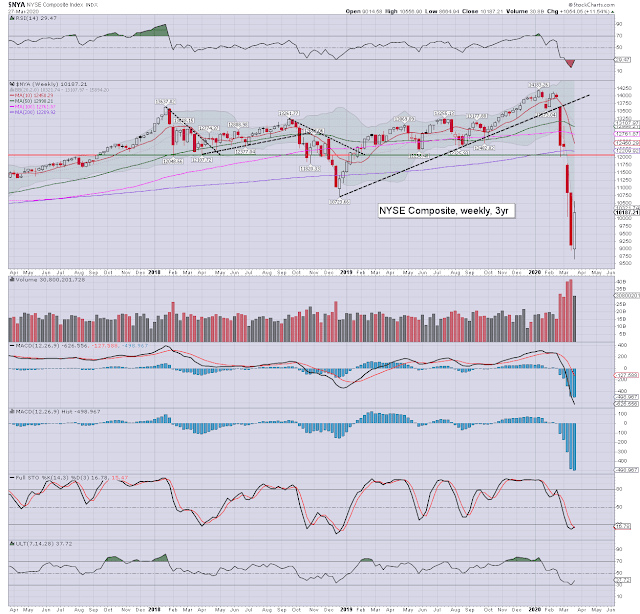 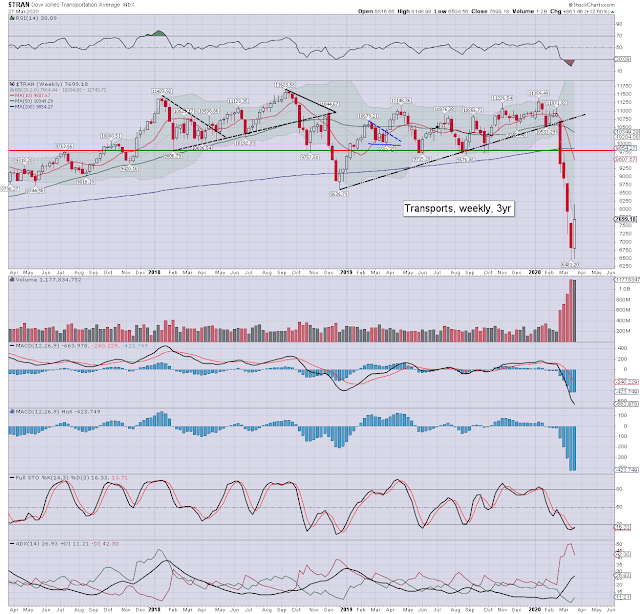 Four of the indexes broke new cycle lows on Monday, the Transports being the exception.

The Dow lead the way up, with the Nasdaq a little laggy.
–

Another very busy week can be expected, not least with literally hundreds of Corona related news headlines each day. The Friday jobs data from the BLS will not be pretty, and will be indicative of the US economy collapsing into an economic depression.

Last week was wild, swinging from sp'2191 to 2637, for what was a classic 'bear market rally', and such extremely powerful rebounds have to be expected. I could highlight a fair number of monthly charts for some perspective, and after some thought, this sums up what I want to emphasise... 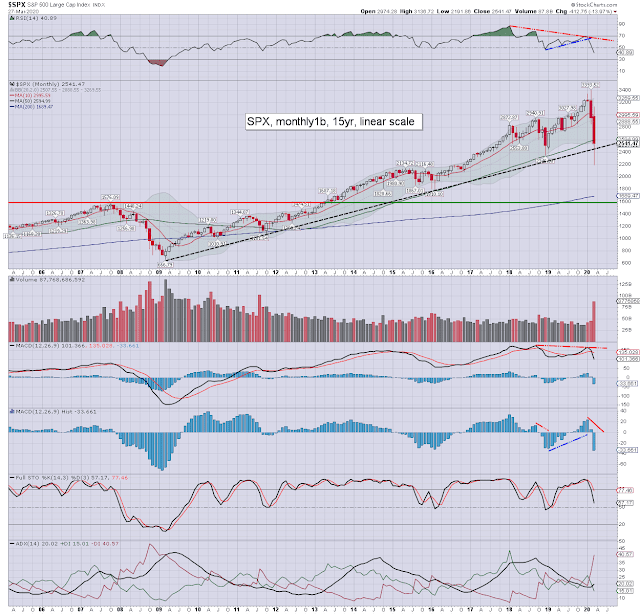 February's hyper bearish engulfing candle counts as month'1 down. March has seen severe bearish follow through, notably breaking the l/t upward trend from 2009. Further, I would note the technical divergence that stretches back to Jan'2018.

The grander issue - at least to yours truly, is whether the 10MA can be broken and settled above on a multi-week/month bounce. Even with trillions of QE being thrown at the system, it won't be easy to turn the m/t trend back to outright bullish.

On the Corona, I will merely say... as an onlooker to humanity, its fascinating to see how easy a society/species is willing to give up their freedom on the command of the very same political hacks, who never accepted the virus was a serious problem until just a few weeks ago. UK PM Johnson is a prime example, who chose to shake the hands of known infected patients, and now ranks as the first world leader to have the virus. Am I supposed to have any degree of respect for him? Never mind that he is the same arrogant fool that took away my right to live and work within the EU.

To the older and the ill... stay at home! To the rest of you, I offer the hope that semi-normalcy might occur by June/July. Be careful out there... in the twilight zone.

Have a good weekend
--
*the next post on this page will likely appear 5pm EDT on Monday.
Posted by Trading Sunset at 16:26:00
Email ThisBlogThis!Share to TwitterShare to FacebookShare to Pinterest

Who should bail it out? 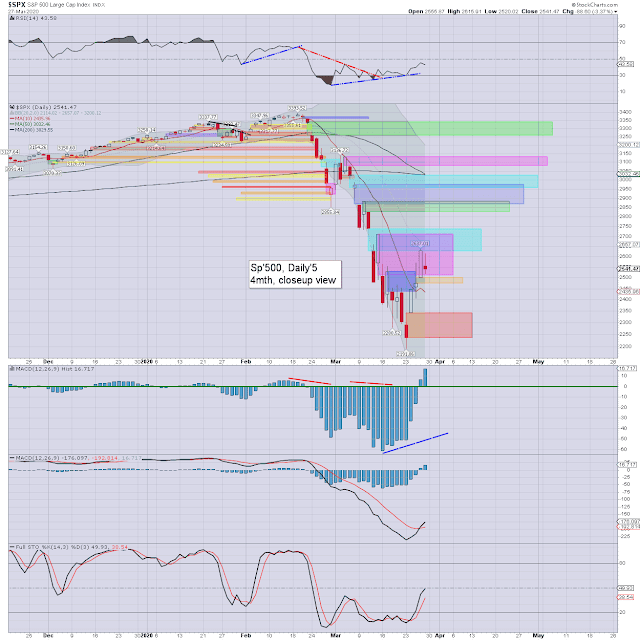 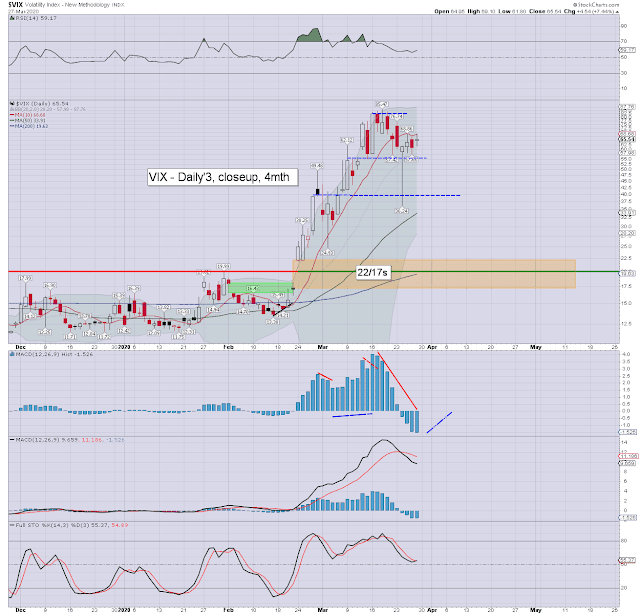 US equities opened very significantly lower, as the three day bear market rally - which is what it was, came to an end. The afternoon saw considerable chop, leaning on the upward side to 2615, but then spiraling lower to 2534, a rather classic (and not surprising) case of 'rats selling into the weekend'.


Who should bail it out?

As we proceed along the twisted path within the twilight zone, I'm hearing many of the same things I heard in 2008/09.

On an individual level, any failing business is a soul destroying event for both the owners and employees, but that is the nature of business. There is a risk of failure, as much as there is one of success.

Q. Is it such a radical thought (I realise to most it is), that a business have cash reserves to help them survive at least a few months of 'crisis' ?

Ohh, and I don't want to hear anything along the lines of 'this time is different'. The fact remains, the entire economic system has been perpetually on the edge of the financial abyss for years. Most companies are loaded with debt, leveraged to an insane degree, and have next to zero cash reserves.

I have ZERO sympathy for such companies, especially the mid/large cap' giants. Boeing is a prime example of the INSANITY in the early 21st century. A company that spent tens of billions on stock buybacks to manipulate their EPS and stock price upward, and when a crisis occurs... they immediately go to the US Govt'/taxpayer with a begging bowl... or rather... a 'request/demand' list.

... and most pathetic of all, is that the US Govt' are doing exactly as they have been asked. The political elite really do care that CEO Calhoun* is able to afford a 100ft yacht.

*Keep in mind, Boeing, lead by Calhoun, continues to attempt to pressure the FAA to re-certify the 737MAX, an inherently unbalanced plane, trying to fix a hardware problem, via a software update. Incredible! 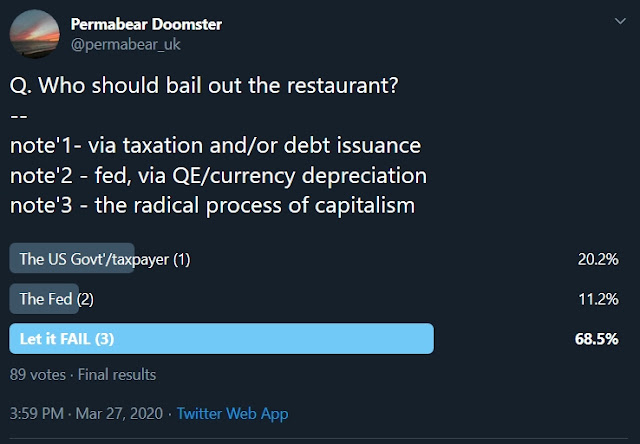 For the record, I would vote 3.

Ohh, and I want to make it clear, I don't much agree with the current lockdown, which is sending the US/global economy into a depression. The lockdown is almost entirely pointless, except for 'flattening the curve', in terms of the number of old/ill people who are being affected by the virus, and pressuring the healthcare system.

I'm well aware some of you don't wanna hear that. Further, is it now borderline illegal to suggest the lockdown is a 'net problem', rather than a 'net solution'?

I'm guessing you might also be the same person who in late Jan/early Feb', (even as late as early March?) who didn't see what was coming, and who didn't prepare ahead of the populace who would (inevitably) turn hysterical, and empty the shelves in your local grocery store.

We have an interesting summer, and more so... autumn/winter ahead.
--

Posted by Trading Sunset at 20:16:00
Email ThisBlogThis!Share to TwitterShare to FacebookShare to Pinterest 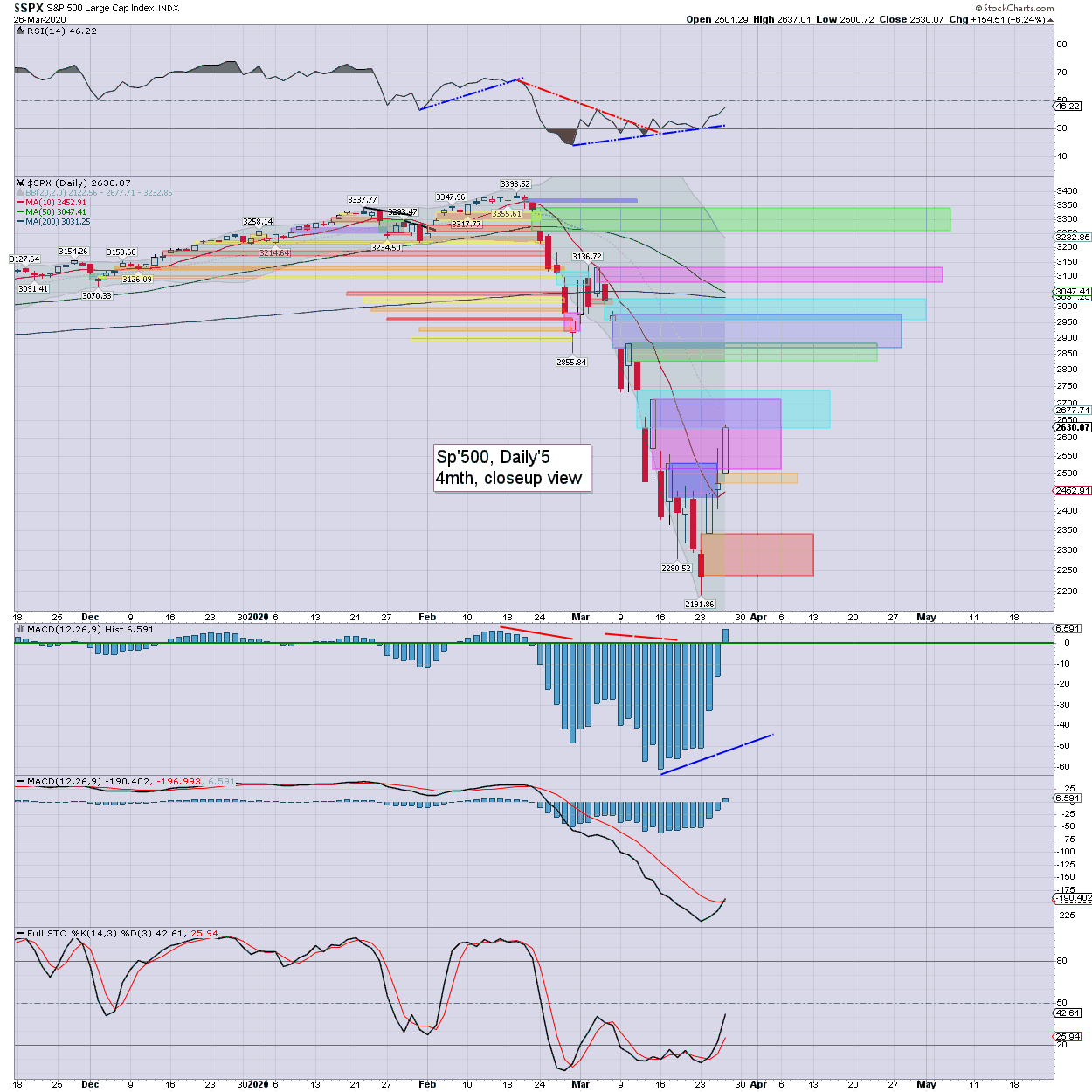 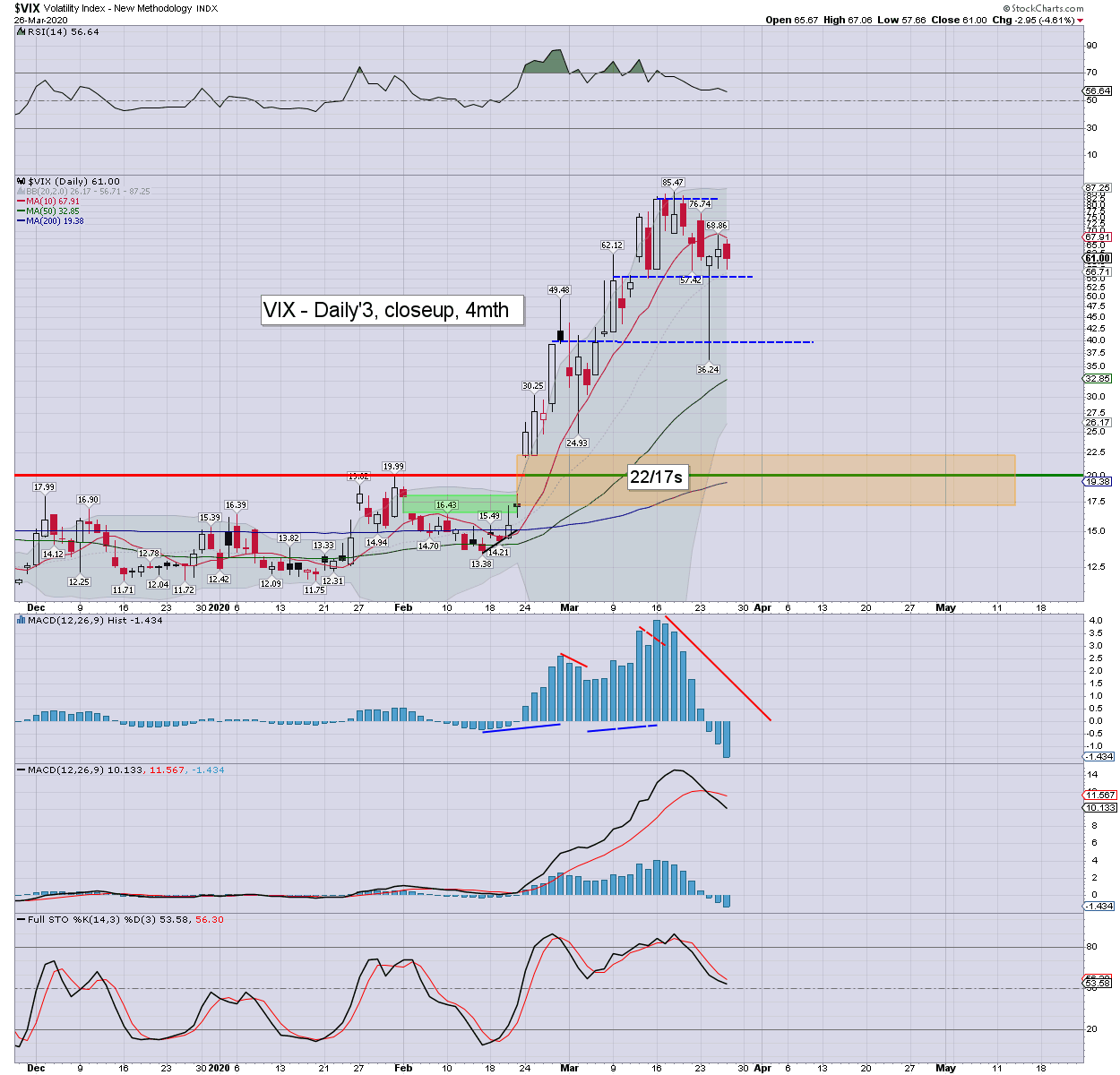 US equities opened on a positive note, which was a distinct improvement from overnight/pre-market. The gains were impressive considering the horrific weekly jobless claims number of 3.283M.

The afternoon saw considerable chop, but with a closing ramp to new cycle highs. Volatility was in cooling mode, the VIX settling -4.6% at 61.00.

The following is highly recommended, even if you can't stand 'the progressives'...

So... a special '$500bn fund'.
That fund is itself arguably to seen as being funded via the US Govt' issuing t-bonds, which will be bought by... can you guess?

Indeed, Print Central will be the buyer of those bonds, well, shortly after they've first been bought by the primary dealers, who then sell them to the Fed with a slight markup. Its good work if you can get it.

Of the $500bn fund, $75bn is set aside, with the other $425bn being credited to the Fed, whom might  leverage it up by 10x, offering a possible collective loan of $4.25trn to large/mid cap' US businesses.

In addition to the financial issues, the ethical conflicts and implications of what the Fed have begun are monstrous. The following is more of Dore, but with guest Rattigan. Again, whether you like either, its highly recommended...


ps. If you're not mad after viewing the above, check you have a pulse.
-- 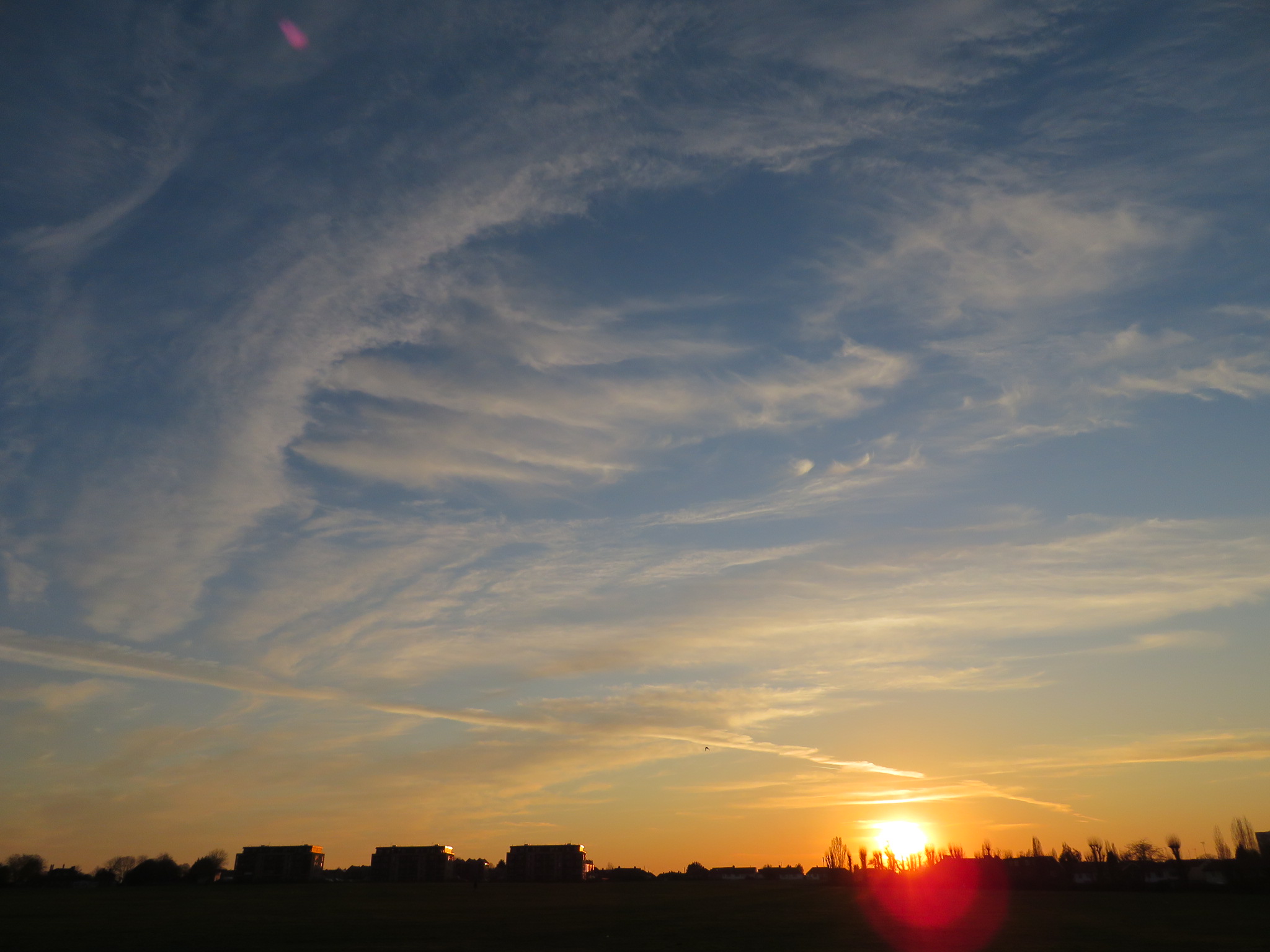 Posted by Trading Sunset at 20:23:00
Email ThisBlogThis!Share to TwitterShare to FacebookShare to Pinterest 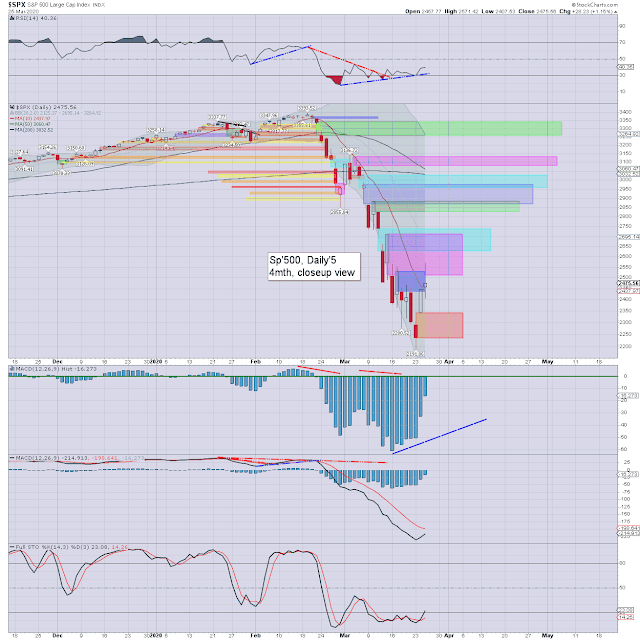 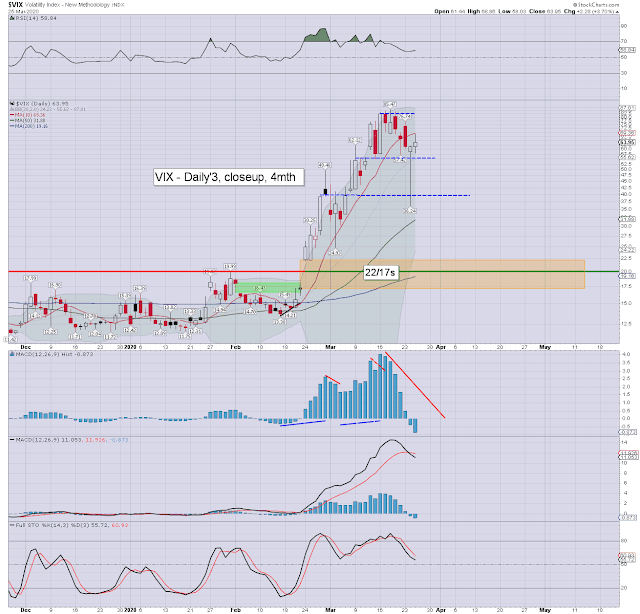 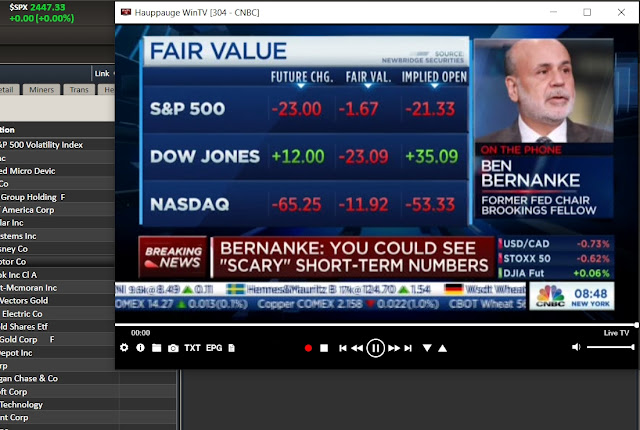 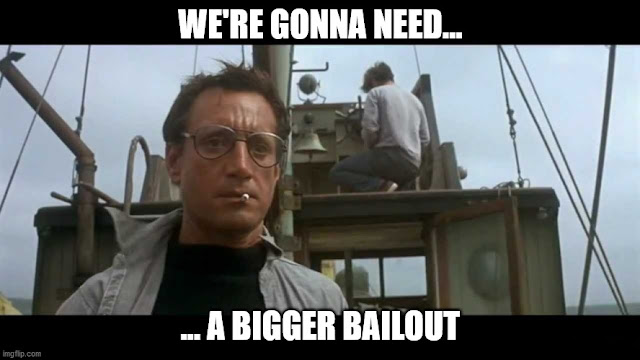 Posted by Trading Sunset at 20:20:00
Email ThisBlogThis!Share to TwitterShare to FacebookShare to Pinterest 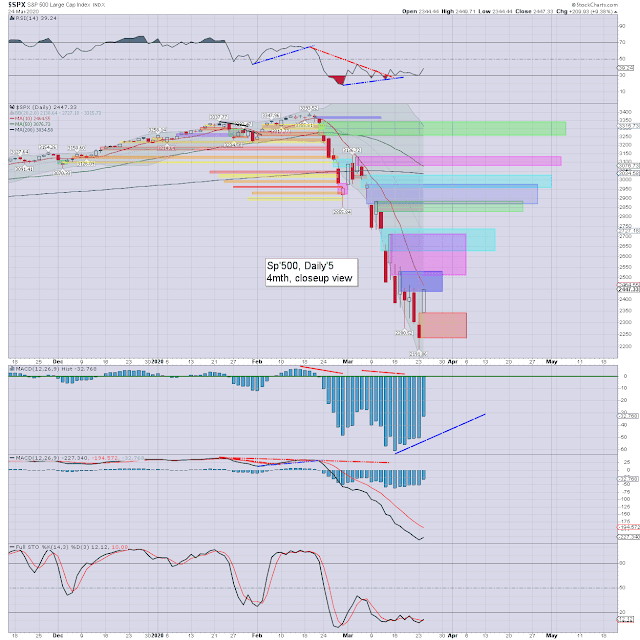 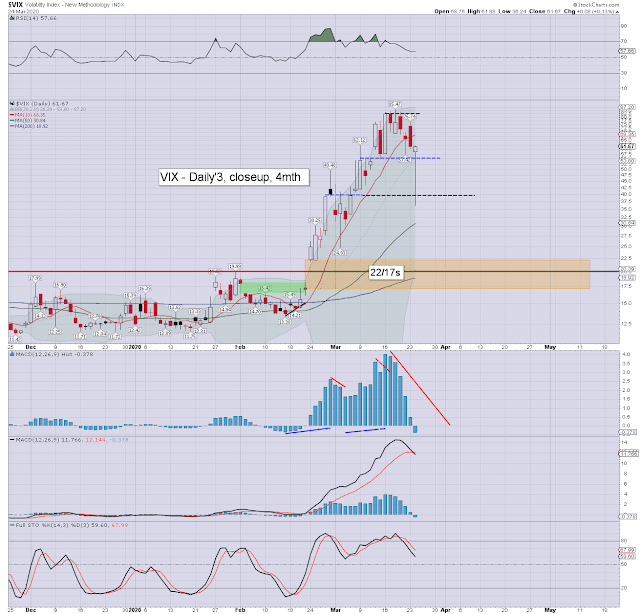 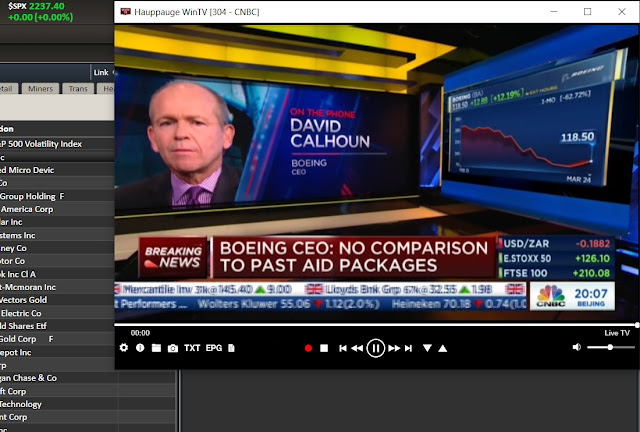 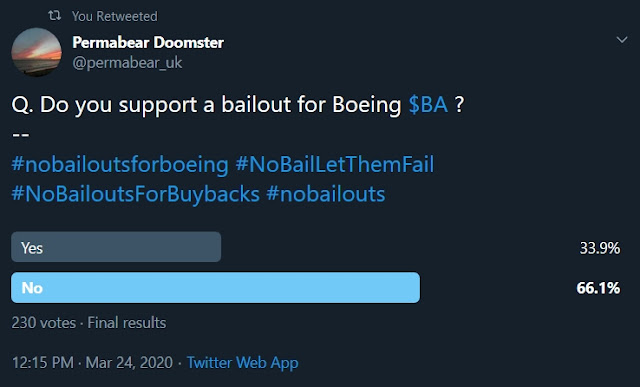