With US indexes building upon opening gains, the VIX was knocked lower (intra low 21.48), but with afternoon weakness, the VIX clawed back upward, settling -7.5% @ 22.79. Near term outlook is for an equity bounce, with the VIX cooling back into the mid teens. 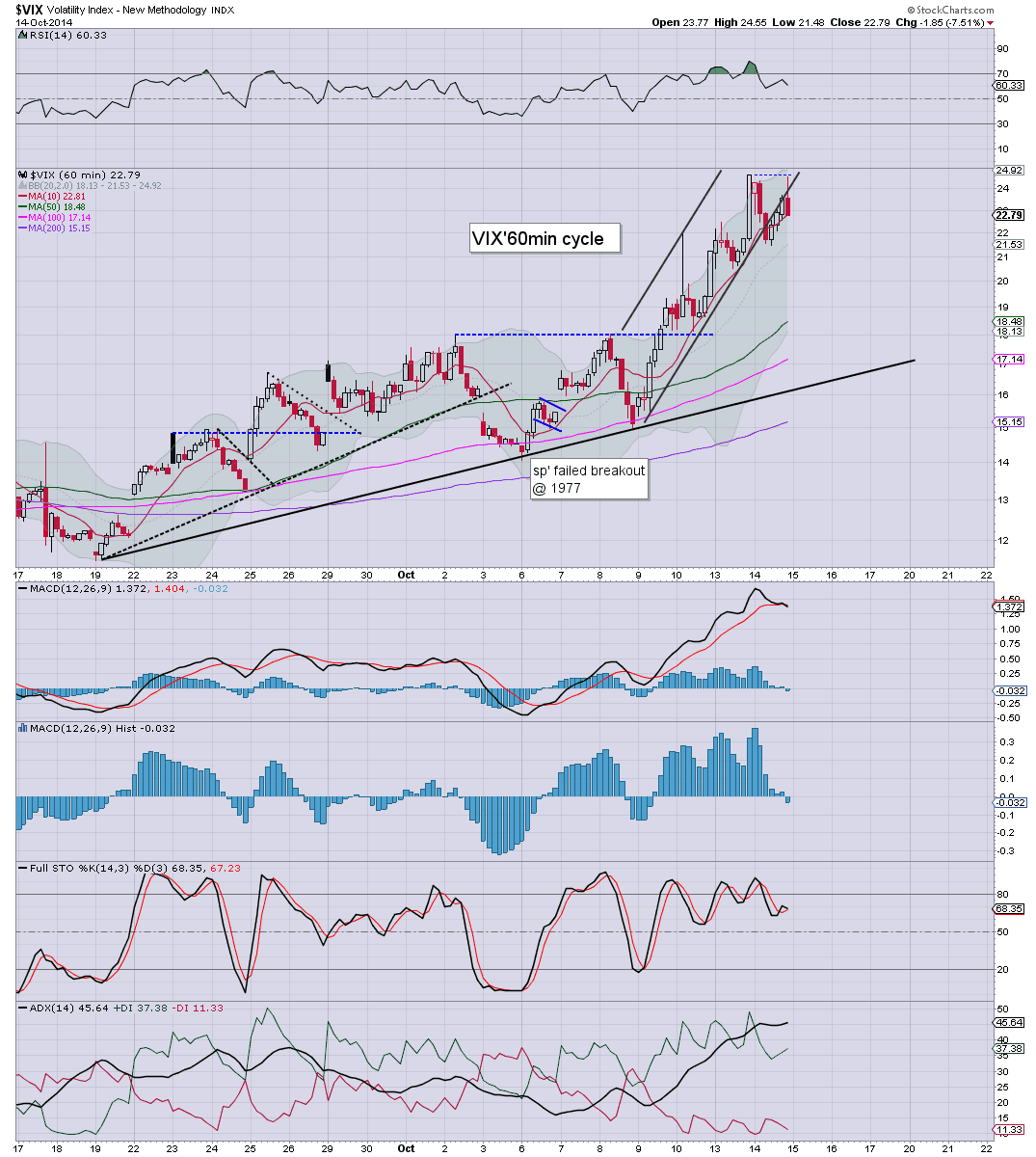 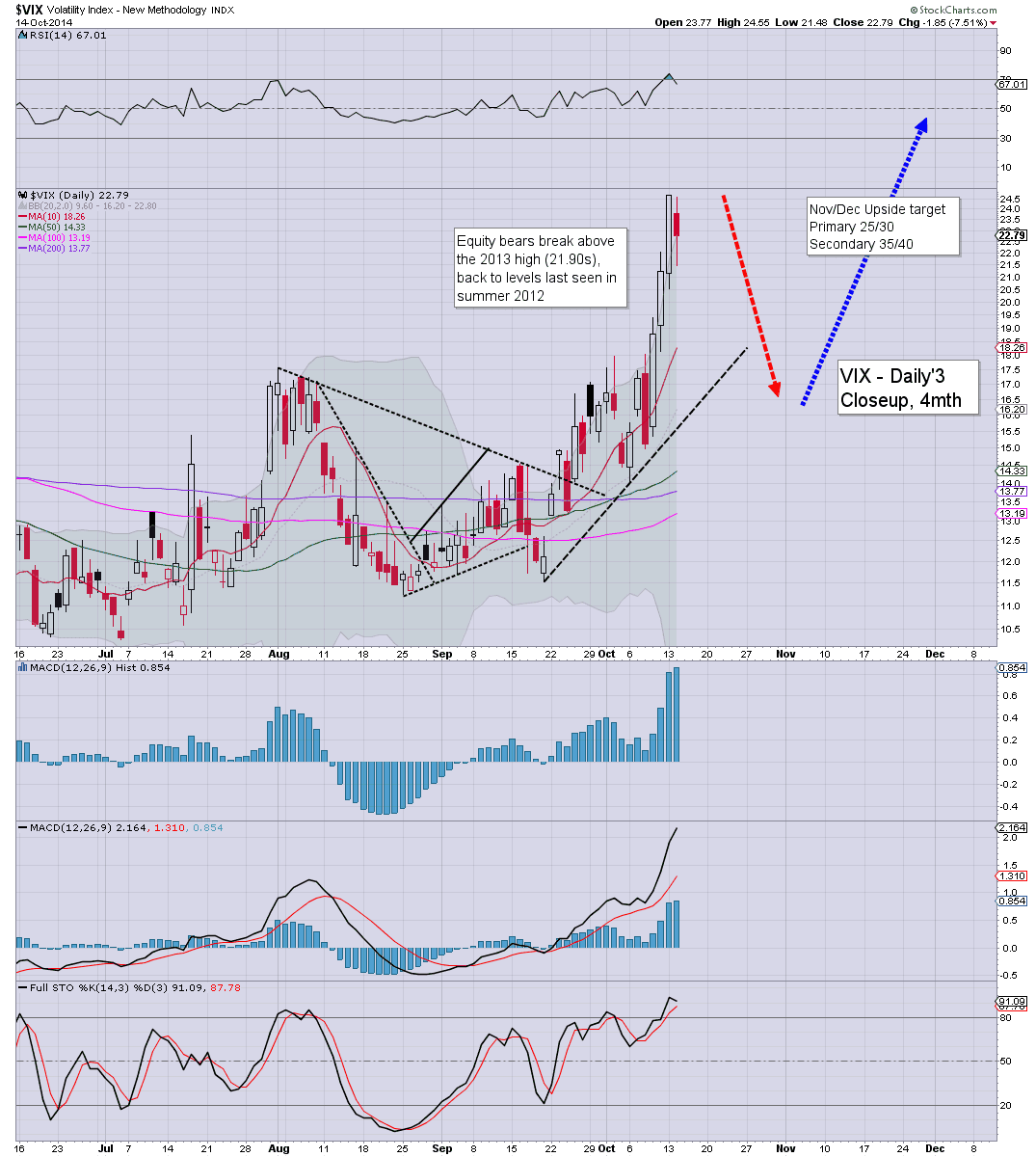 We have an important issue to consider today.

Whilst the sp'500 and Dow broke new multi-week lows, the VIX failed to confirm it, via a higher high.

This is an important issue for all traders to keep in mind, and with the Trans/R2K both posting significant daily gains, it is probably just another sign of a short term turn.

Overall, I still expect an equity bounce of 2-3 weeks, to the sp'1950/60 zone, which should equate to VIX back in the mid teens.

Considering the recent price action in equities, commodities, and the VIX itself, I'm looking for sp'1700s, with VIX in the 30s. I suppose 40s are possible, but first things.... first.

---
more later.. on the indexes
Posted by Trading Sunset at 23:00:00
Email ThisBlogThis!Share to TwitterShare to FacebookShare to Pinterest 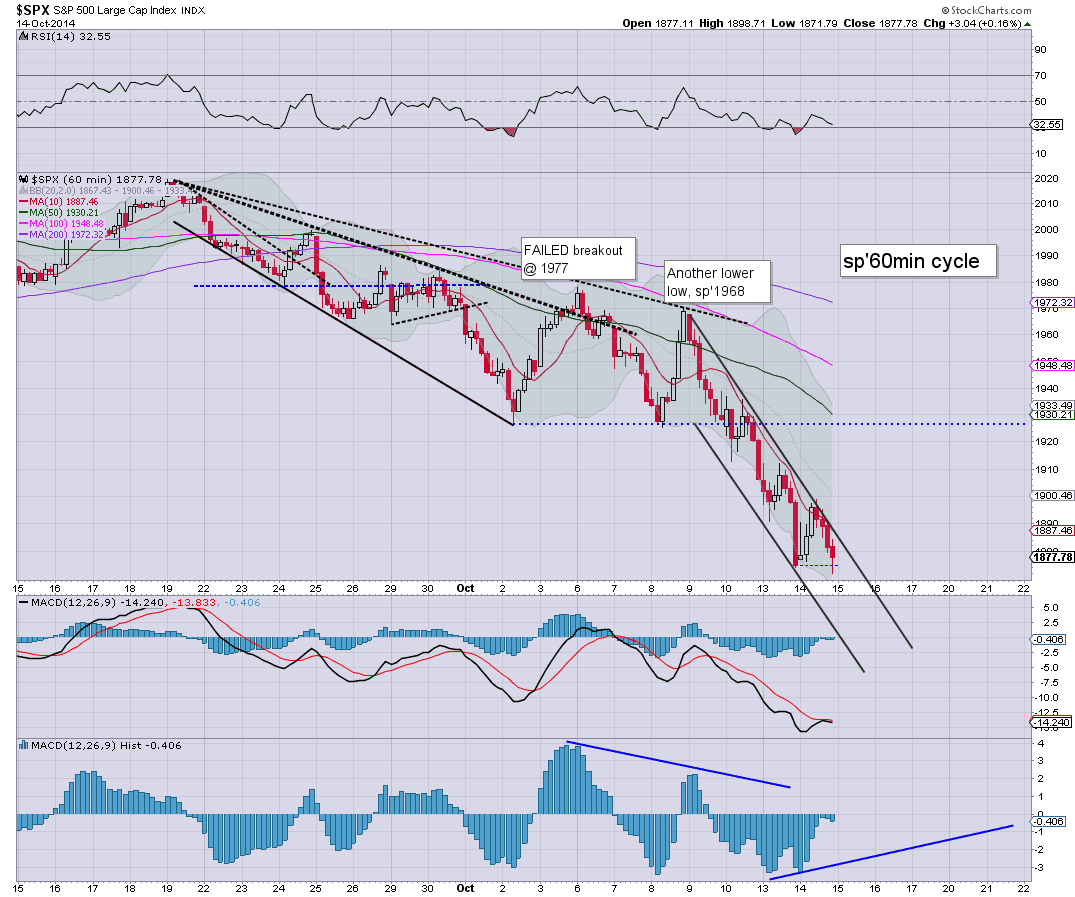 Suffice to say, another day for the equity bears. The earlier gains managing to 1898, was fully reversed with a 27pt swing to the downside across the afternoon.

Volatility is back.. and it ain't going away now for some months. Get used to it!
-

Best guess.. we're still headed higher across the next 2-3 weeks. Whether we max out around 1950, 60.. or even a little higher... should make little difference to the equity bears. With the monthly cycles utterly broken, we're broadly headed much lower across the remainder of the year.
--

Unlike yesterday afternoon, the market looks set to hold some gains into the close. With the break of the short term down trend, market looks set to put in some daily closes back in the sp'1900s. Broader picture though remains extremely bearish for November. 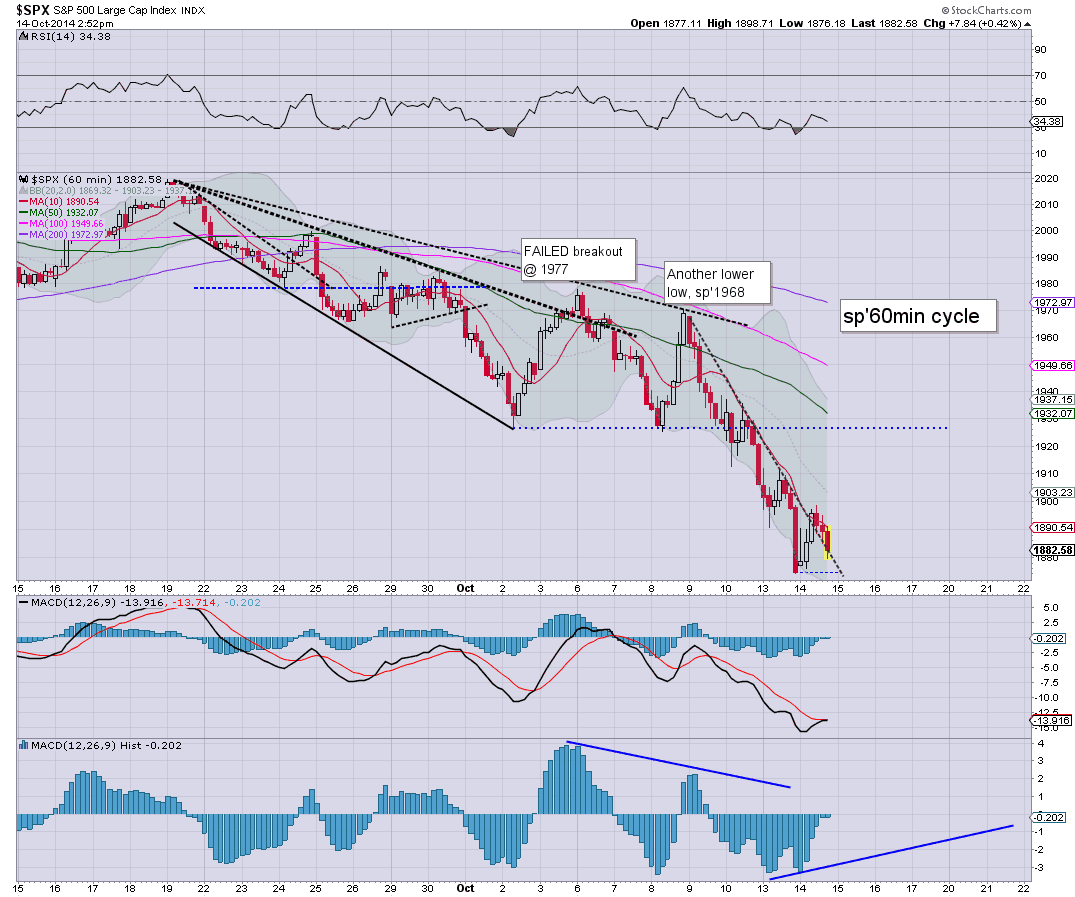 *price action is a simple break of trend... and arguably a back test of the down trend itself
--

...well, yesterday things took a major hit, when the morning low of sp'1890 was taken out. I have to guess we won't see that happen in this closing hour. Price action is more stable, and we have a clear break of the down trend on the hourly cycle.

Equity bulls should be content with any daily close about the hourly 10MA, which in the closing hour will be around 1888 or so.
-- ..updates into the close
-

Its been so long since we've seen this.... I think almost everyone has forgotten.


3.26pm.. another major fail for the bull maniacs. It truly is a full THREE years since we've seen this kind of price action.

The only notable aspect left to achieve is a corresponding higher high in the VIX.

Despite the index weakness, airlines are holding gains, DAL/UAL +5%

With the Trans and R2K still positive on the day.... bulls still have provisional sign of a bounce.. although I realise the new Dow/SP' lows are sure as hell not bullish.

Regardless, another day in favour of the bears.. with the bulls still failing to sustain gains.

Notable strength, F +2%.. but its a clear 3% or so below old key support.
Posted by Trading Sunset at 19:53:00
Email ThisBlogThis!Share to TwitterShare to FacebookShare to Pinterest 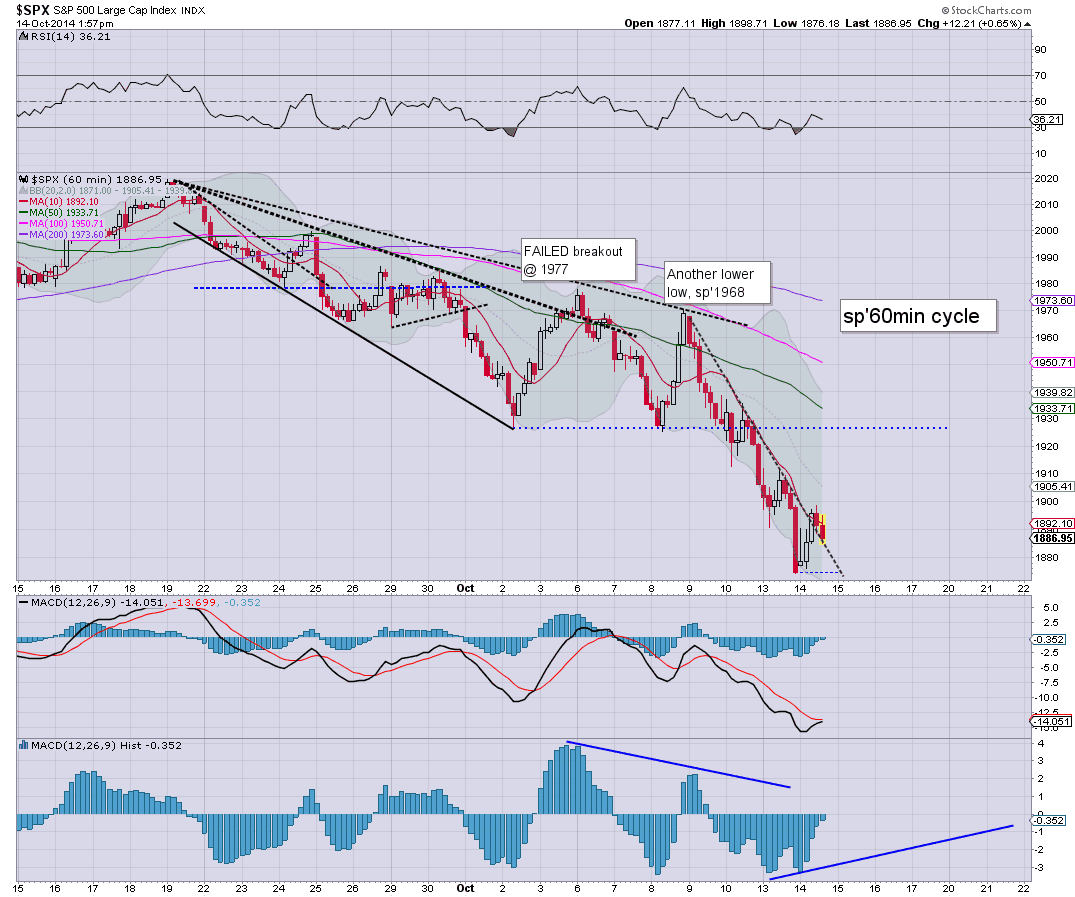 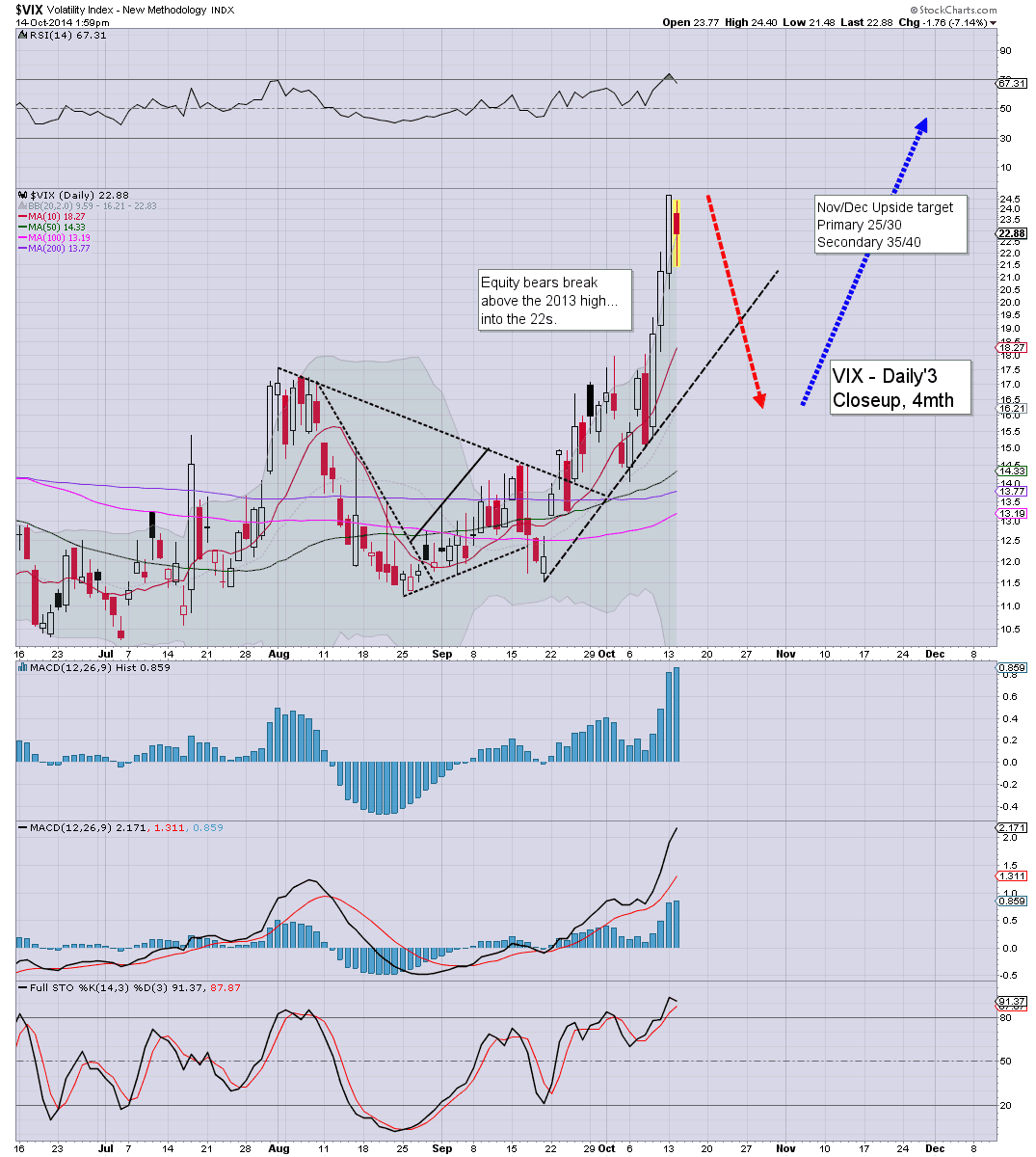 I realise though, some are seeking further downside to 1860/50 before a key low. I suppose its possible, but we do have a clear break of the down trend (see 60min cycle).

2.30pm... despite the weakness, price structure is a baby bull flag. 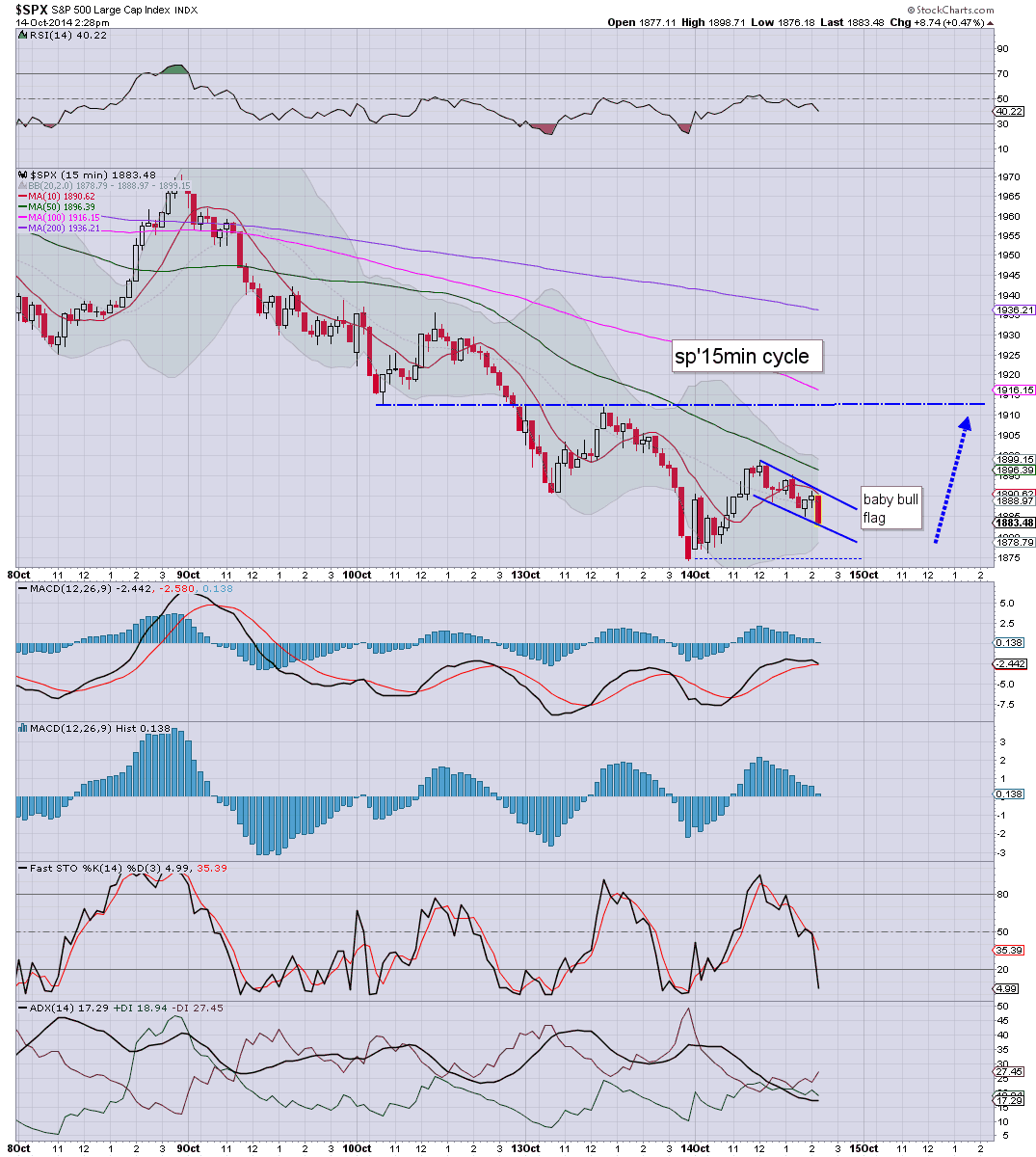 so long as 1874 holds... its a valid bull flag leading higher into tomorrow.


2.46pm... and another push higher....   this kind of volatility is still so.... unusual. VIX -7%
Posted by Trading Sunset at 18:59:00
Email ThisBlogThis!Share to TwitterShare to FacebookShare to Pinterest

US equities have broken the short term down trend, with a key floor of sp'1874. Equity bulls should be content with any daily close in the 1885/95 zone, anything above 1900 would merely be a bonus. VIX is naturally imploding, -12% in the 21s. 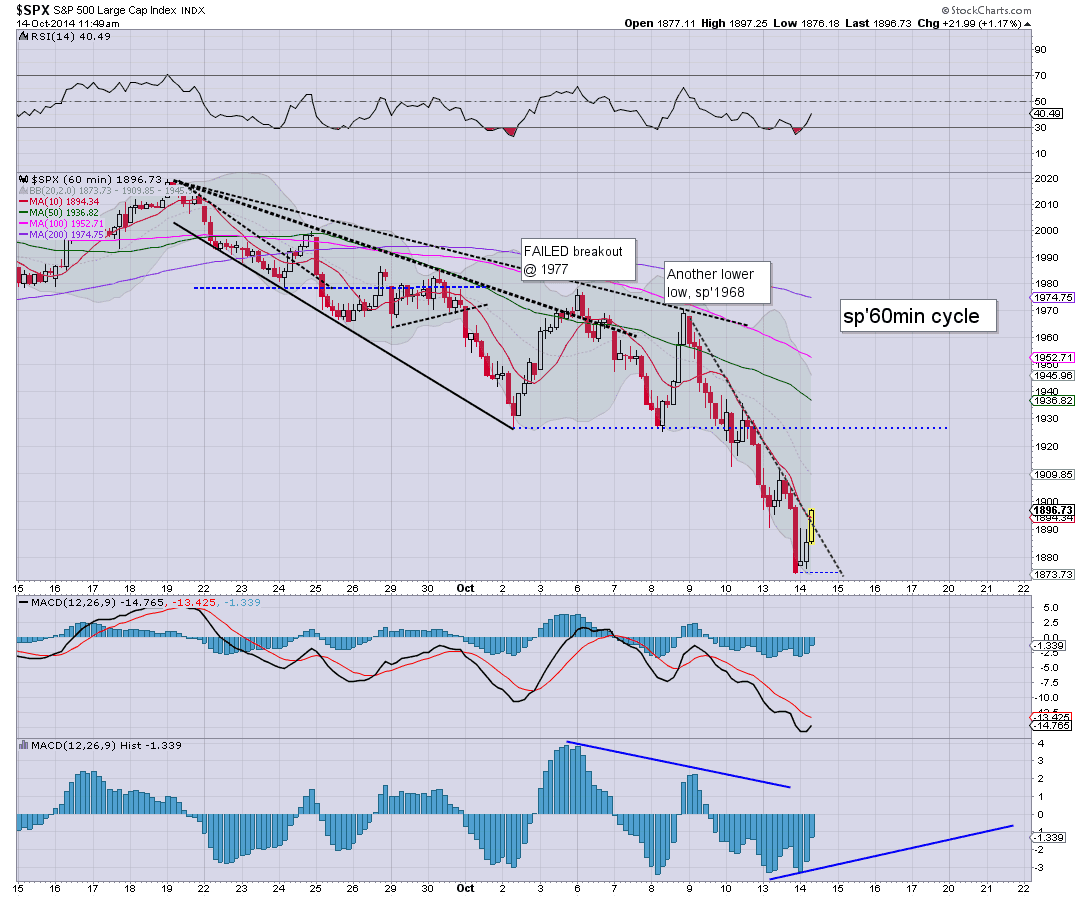 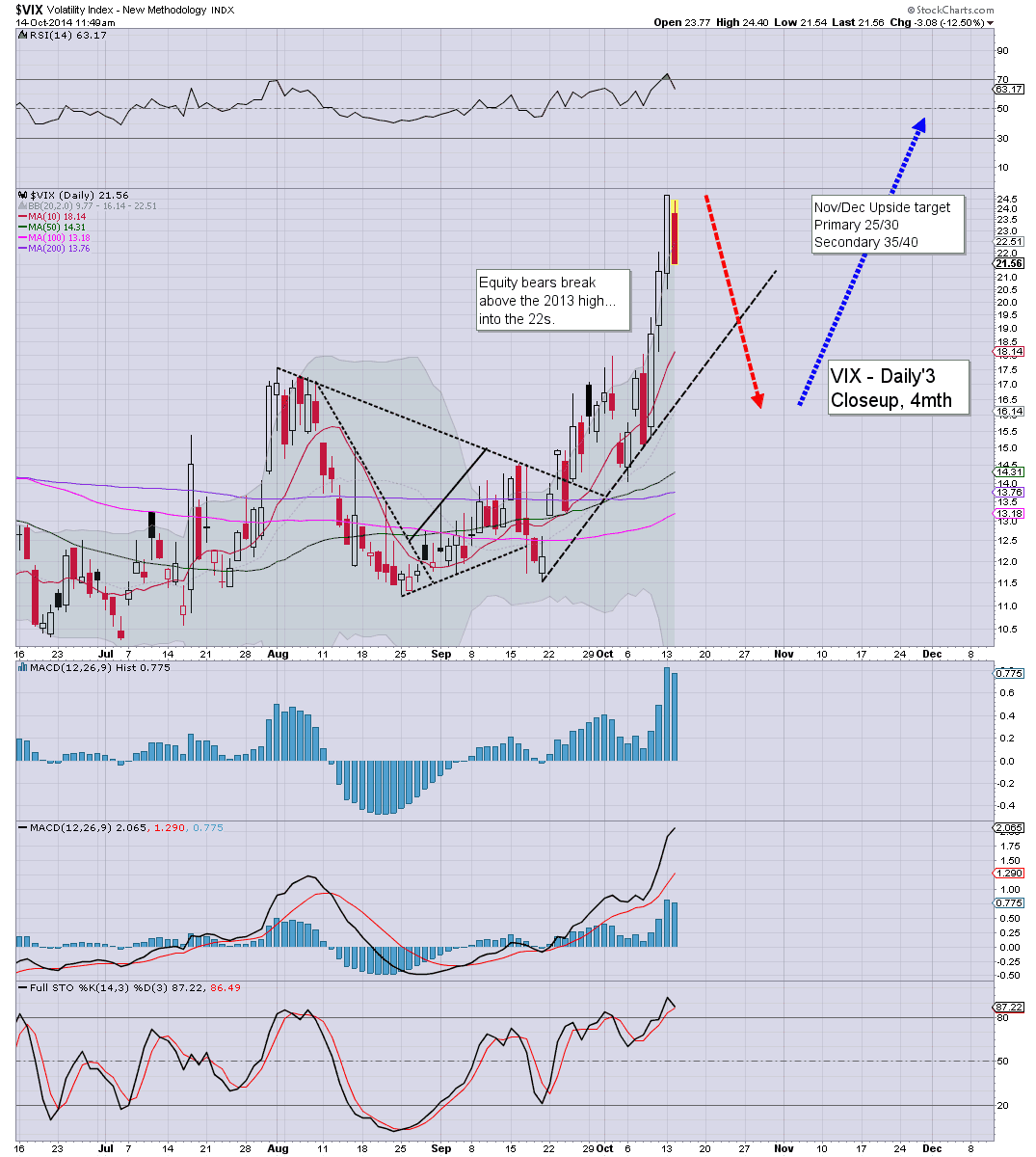 Suffice to say...  we're now headed broadly higher... but a bounce it will be.. resulting in a critical lower high in late Oct/early November.

... oh how pleasing it will be to see the faces on clown finance TV, when this all unravels in the next wave.


--
Time for lunch........ back at 2pm (I'm really struggling today.. sickly)
Posted by Trading Sunset at 16:54:00
Email ThisBlogThis!Share to TwitterShare to FacebookShare to Pinterest

11am update - battling to break the down trend

US equities sure are shaky this morning, with opening gains failing, but holding the Monday low of sp'1874. A renewed push higher is underway, with the hourly 10MA @ 1895, as key resistance. VIX continues to cool, -7% in the 22s. 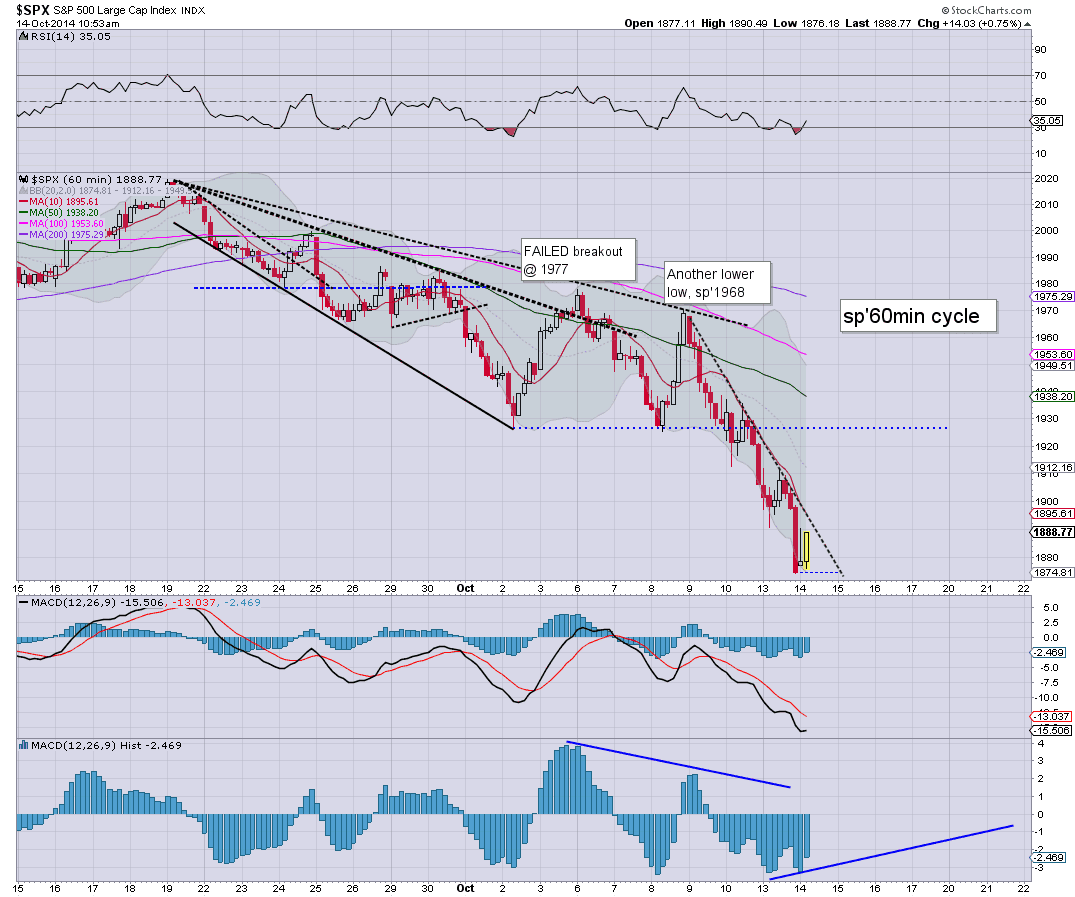 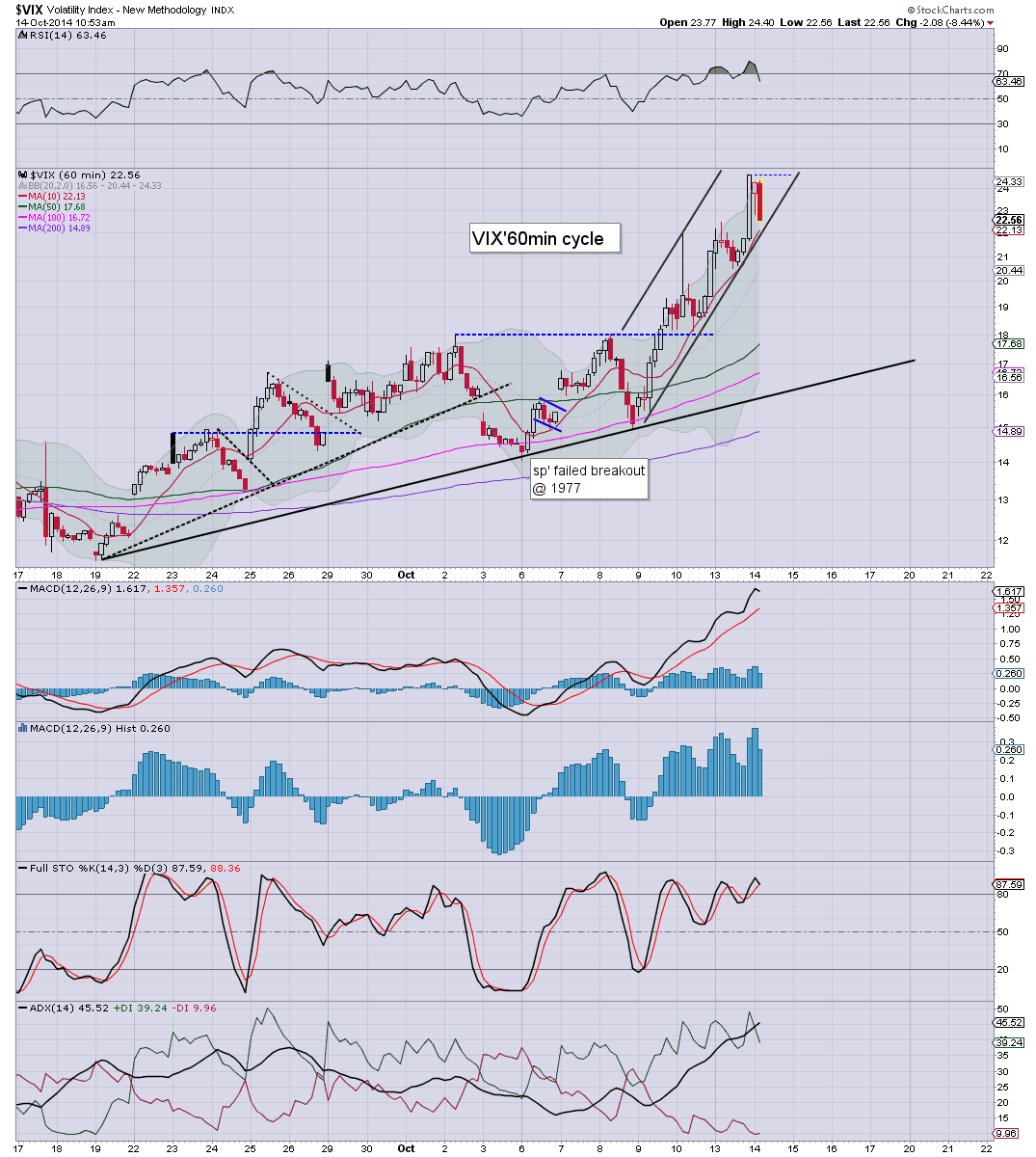 Suffice to say, we're close to confirming a floor.

Just need a few trading hours above the hourly 10MA, which would be a clear break of the down trend.
--

Airlines are strong, DAL/UAL, both higher by around 5%

We have a floor of sp'1874... and we're now day'1 of a 2-3 week bounce.
Posted by Trading Sunset at 15:56:00
Email ThisBlogThis!Share to TwitterShare to FacebookShare to Pinterest

US equities open moderately higher, and the bulls are making a play to break back above the important hourly 10MA - currently around the big 1900 threshold. VIX is cooling, -4% in the 23s. Oil remains weak, -0.4%. 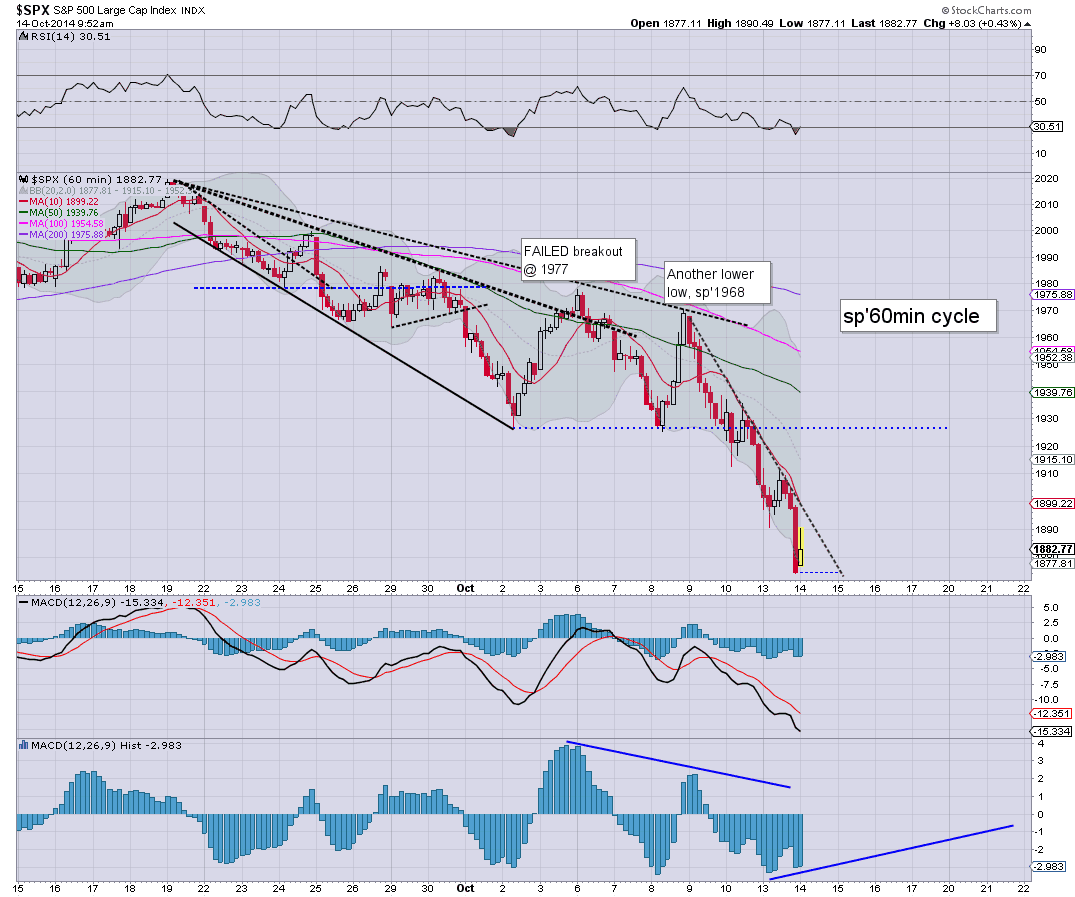 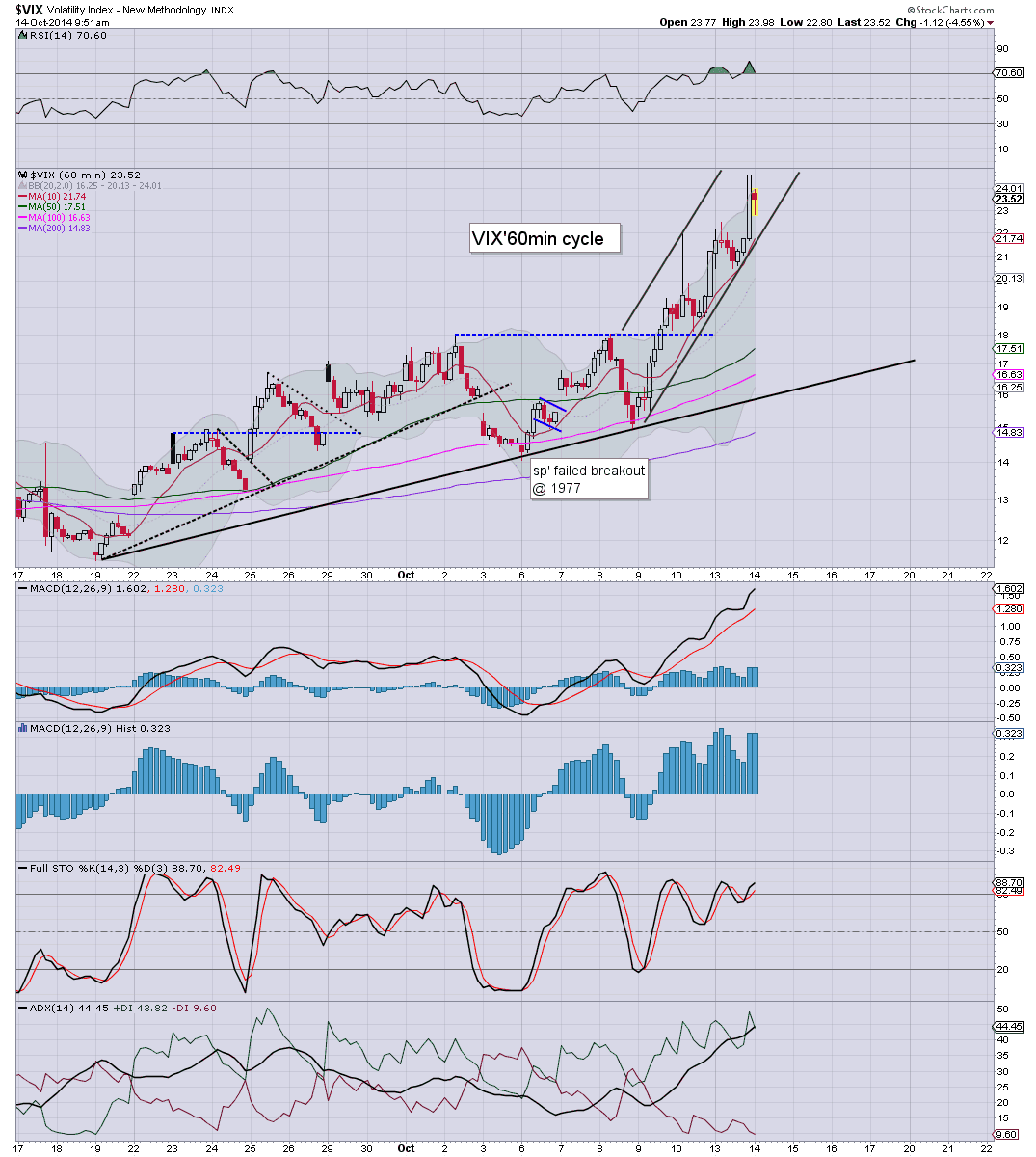 So... opening gains, but just getting back above sp'1900 is going to be difficult, and will likely take 2-3 days.

As many recognise, with opex this Friday, Mr Market would probably like to destroy as many of those index puts as possible.

Notable weakness: DRYS -2% in the $1.40s.. Mr Market sure doesn't like the cancellation of the debt auction.


10.01am... gains fading very quickly... however the R2K is holding gains of 0.7%... bodes for another renewed push higher in the broader market as the day continues.

*Armstrong posted a LOT of good articles in the past day... go read >>>>>>>>>>>>
Posted by Trading Sunset at 14:54:00
Email ThisBlogThis!Share to TwitterShare to FacebookShare to Pinterest 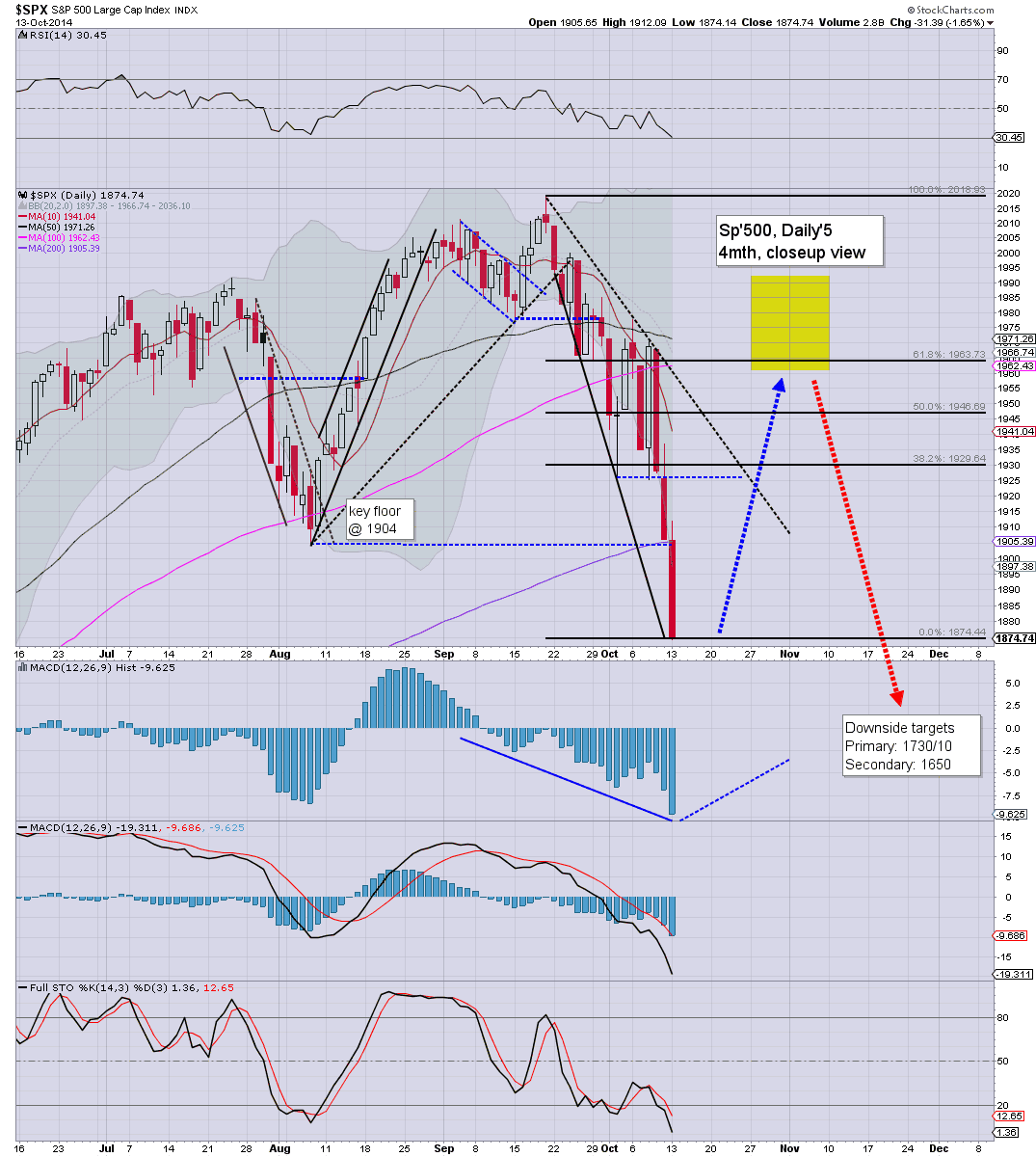 So, we're set to open a little higher, but clearly, the market is having some real problems. A rally to 1950/60 seems very viable - across 2-3 weeks, before a more severe wave lower.

I'd agree with Oscar that this is not the start of a 2008-esque crash, but I would argue it is more of a summer 2011 intermediate correction.

--
Good wishes for Tuesday
Posted by Trading Sunset at 13:26:00
Email ThisBlogThis!Share to TwitterShare to FacebookShare to Pinterest

A few weeks ago, the low sp'1900s seemed a bold call, and yet we're now significantly under the August low of 1904, and the 200 dma is a clear 30pts higher up. US equities look utterly broken. Regardless of any bounces, this market is headed much... much lower. 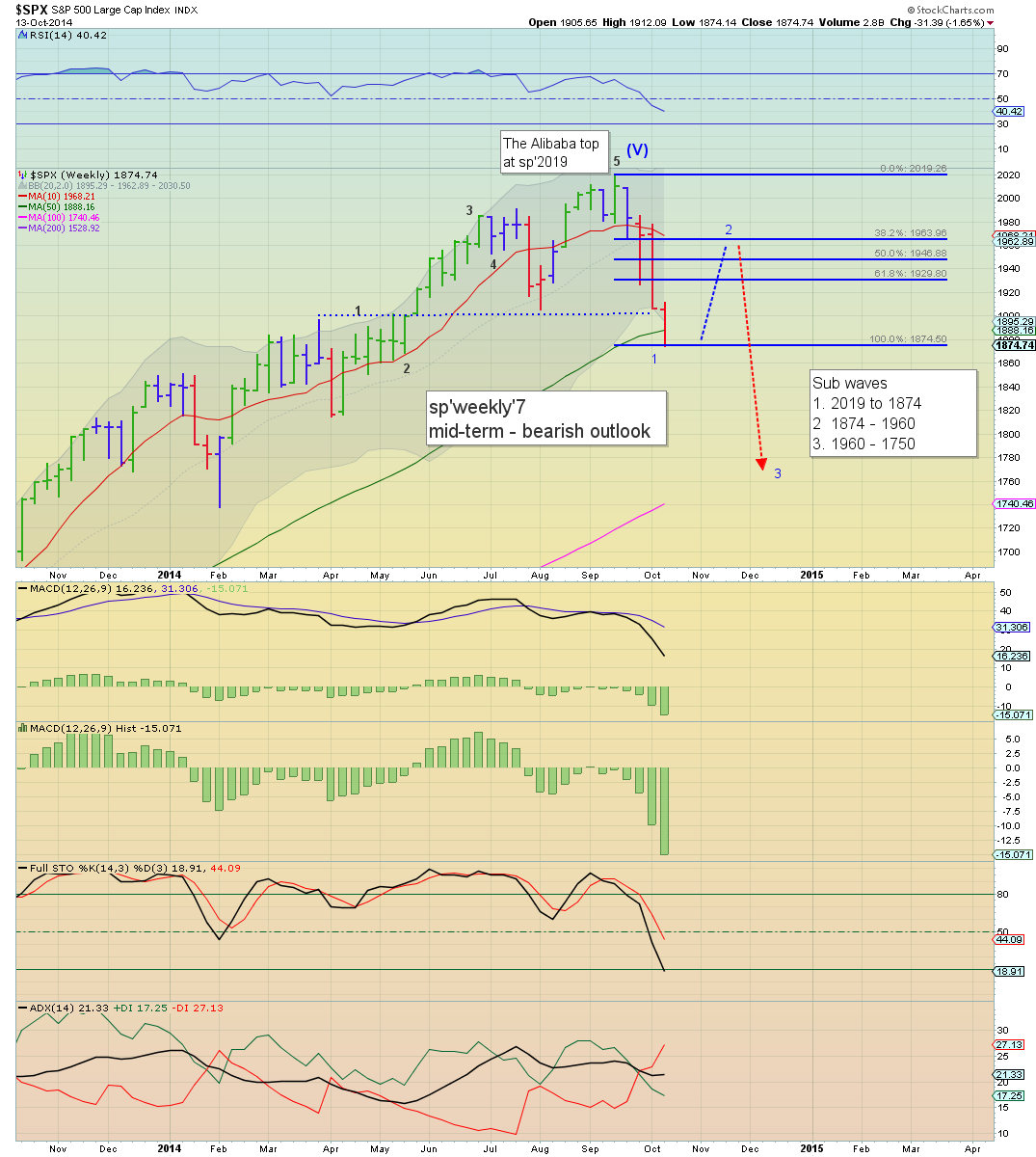 *first, I should note, I'm guessing we will see at least some further weakness early Tuesday.. so I will probably need to adjust the above chart/wave levels.
--

So, we start the week with a third consecutive red candle on the weekly 'rainbow' chart. We're now consistently trading below the lower weekly bollinger, and frankly... even I'm surprised.

I had expected some significant downside to the low 1900s, but the past 3 days have seen some rather severe price action. Further, it is being reflected in the VIX, which is now trading in the mid 20s for the first time since summer 2012.

With the break under sp'1900... the H/S scenario I have been highlighting lately is actually in jeopardy If we go much lower, the neckline would be too slanted to be viable. 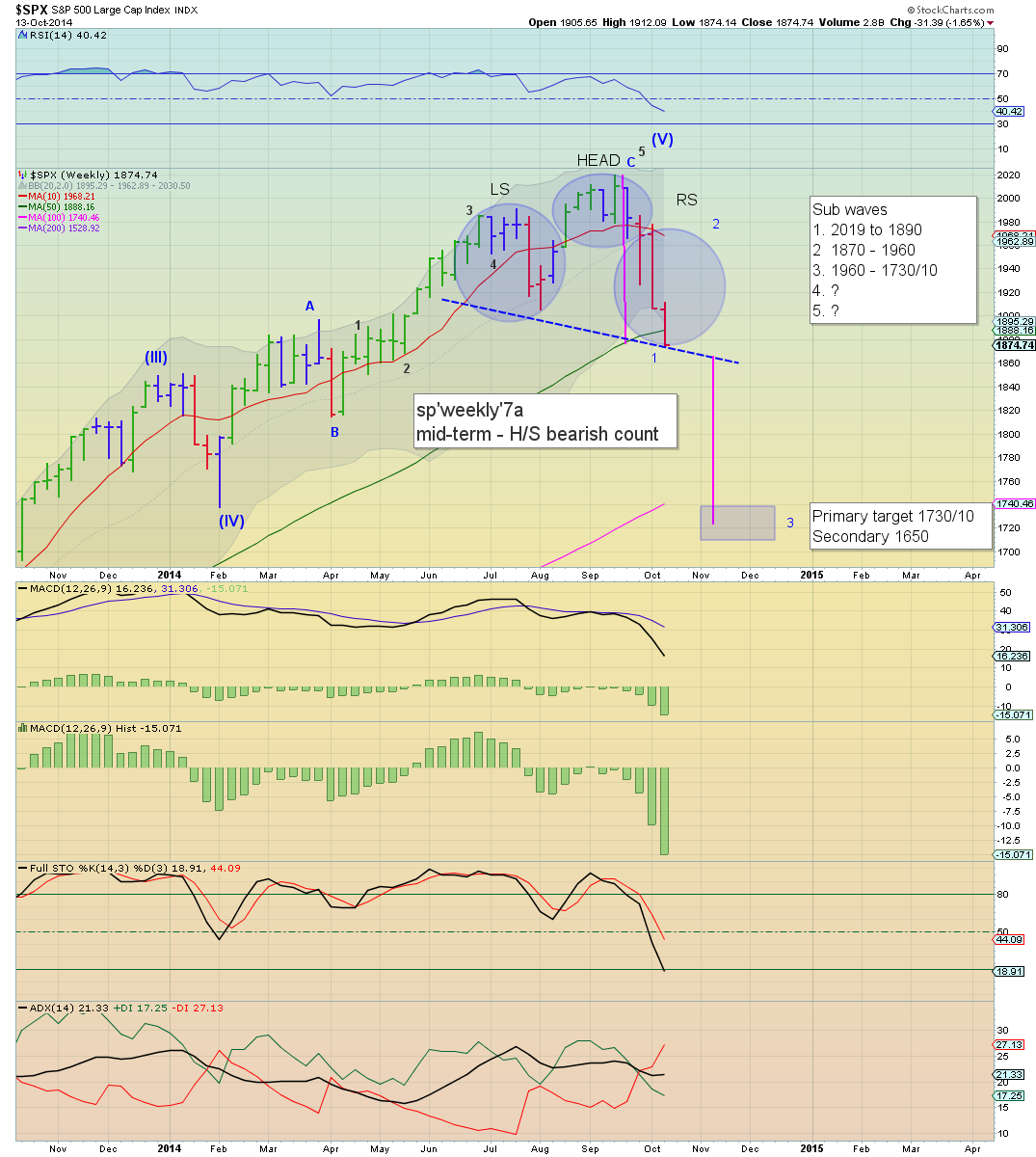 I realise some would already ditch the above scenario, in favour of a simple 123 down wave, with a third in November, but for now, I'll keep it.. if only for another day.

There is no significant schedule news/data tomorrow.


A bounce still seems due

I remain absolutely bearish about the intermediate picture - as I detailed last Friday. Despite today's declines, I'm still resigned to an equity bounce of some degree into late Oct/early November. For me, that will merely be a place to go heavy short, with a target (revised) in the low 1700s. Increasingly.. it is looking like the 2011 retrace (of 38%).. of sp'1650s is now a viable possibility.

So, in the immediate term, I'd still look for an equity bounce, with VIX retracing from the mid 20s to the mid teens. It wouldn't be that unusual, we saw just that in June 2011.. before the VIX exploded from the teens to the 40s. 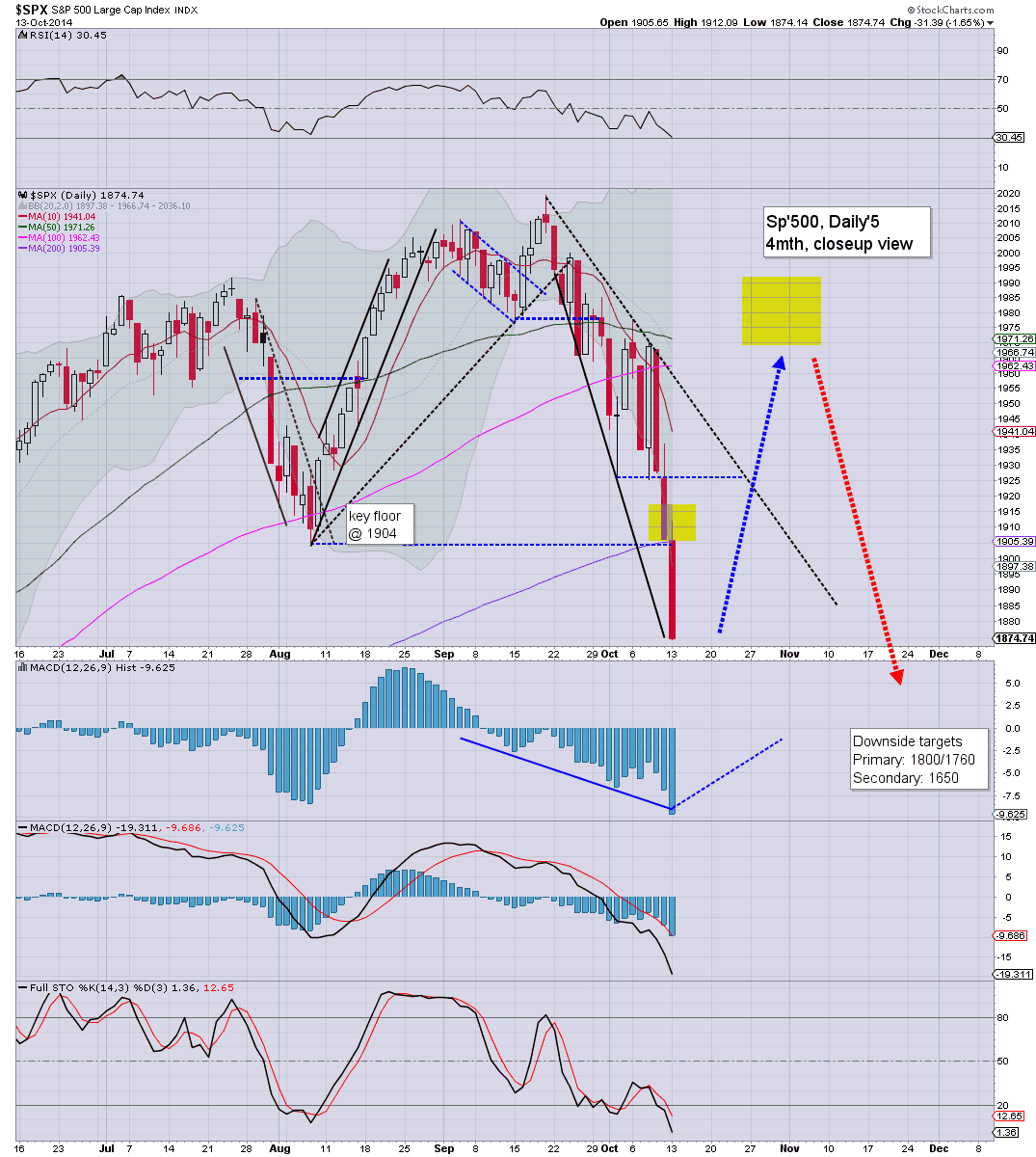 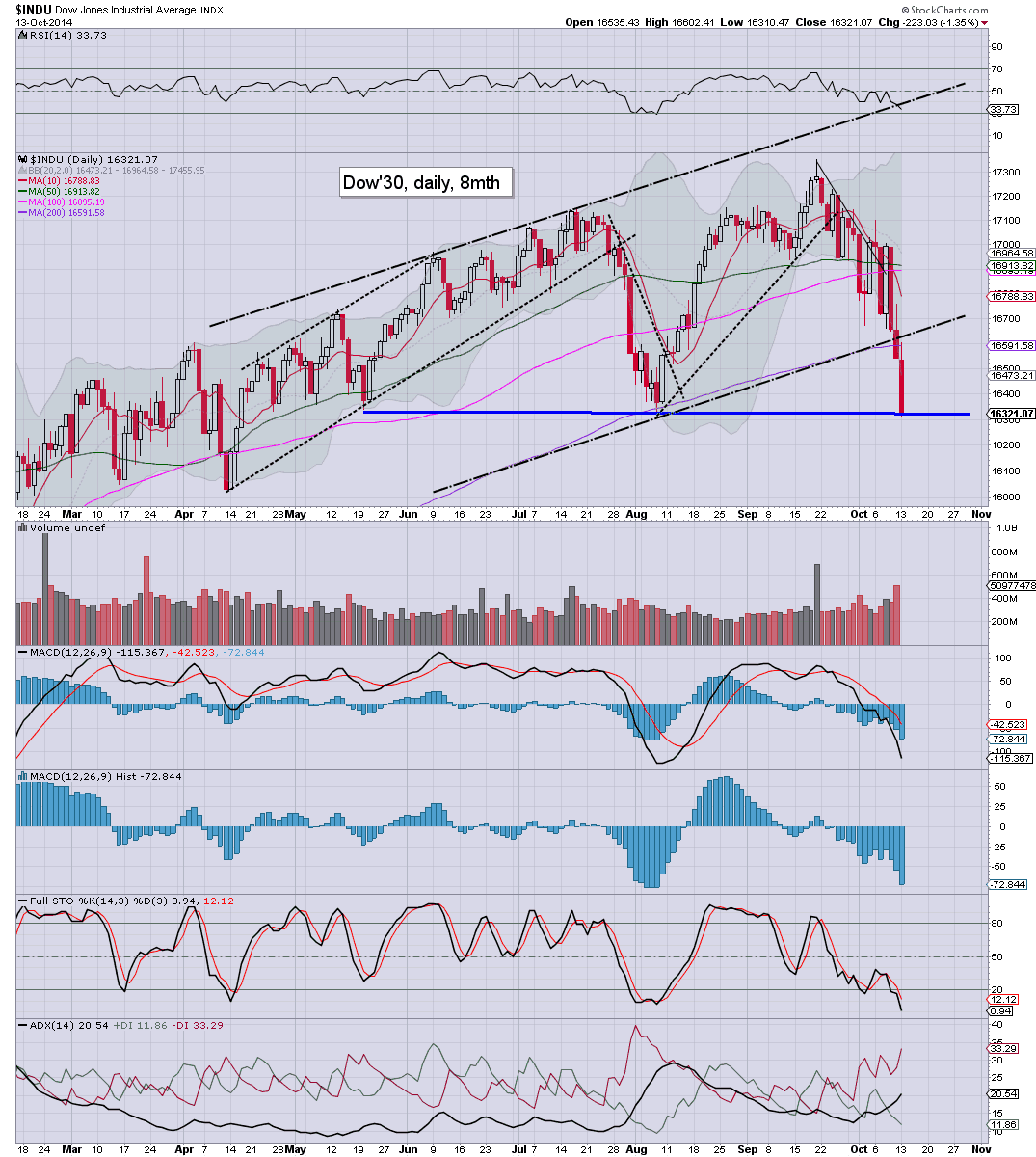 A pretty interesting day to start the week.