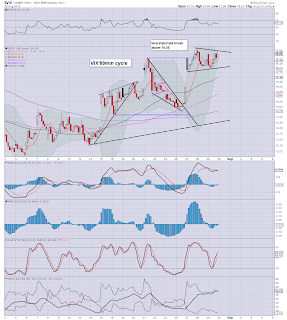 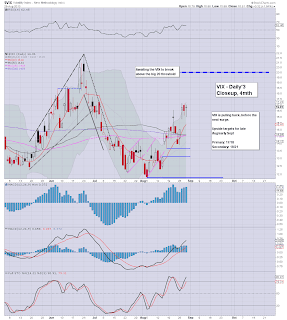 The VIX certainly slipped lower in the morning, but there is underlying upside in volatility - as seen best on the daily/weekly cycles.

VIX looks set for another jump higher, whether tomorrow..or early next week.

The main indexes closed moderately higher, with the sp +3pts @ 1638. The two market leaders - Trans/R2K, closed up 0.25% and 1.0% respectively. Near term trend remains moderately weak, with downside into the long holiday weekend. 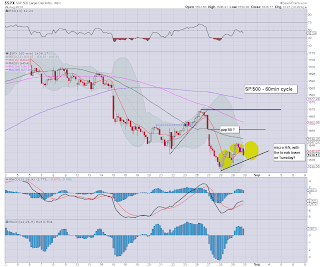 Well, that was an acceptable close for the bears.

Importantly, bears saw the third daily close below the 100 MA.
--

the usual bits and pieces across the evening
Posted by Trading Sunset at 21:02:00
Email ThisBlogThis!Share to TwitterShare to FacebookShare to Pinterest

The main indexes are still holding moderate gains, but the closing hour should see some weakness. Equity bears should be seeking a close back in the sp'1630s. Interestingly, VIX remains holding fractional gains. Who wants to be long overnight? 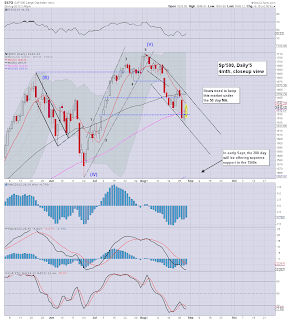 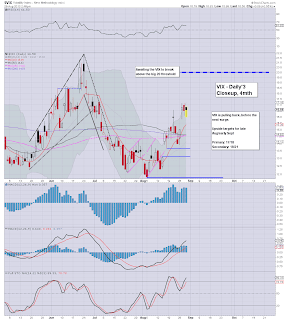 Not exactly the most exciting of days, but at least the bulls are not seeing any kind of hyper-ramp into the 1650s.

There is no reason why we won't see at least a little weakness into the close, with sp'1630s, and VIX closing moderately higher.

*I will remain short the market overnight, via LONG VIX.
-

updates into the close... if things get interesting


3.09pm .Oil slipping, and a red close would confirm yesterdays black-fail candle. Yet...who wants to be short Oil, ahead of any Syria action? 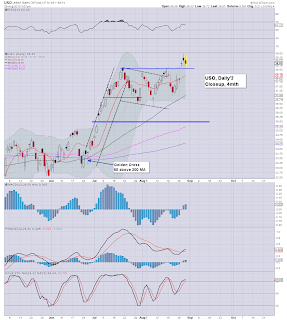 I can only imagine futures traders having their accounts blow up in the coming days/weeks, on any military attack.


3.34pm  sp'1638...kinda good for the bears ;) Can we close now please?
Posted by Trading Sunset at 19:52:00
Email ThisBlogThis!Share to TwitterShare to FacebookShare to Pinterest

The bulls again seem to lack any significant..and consistent upside power, and we're seeing the early signs of a rollover. Bears should merely seek any close <1639. A red close would bode pretty bearish for Friday. 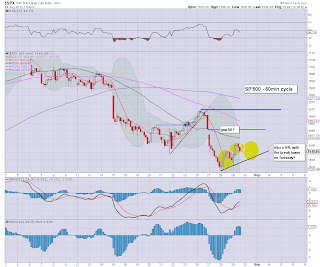 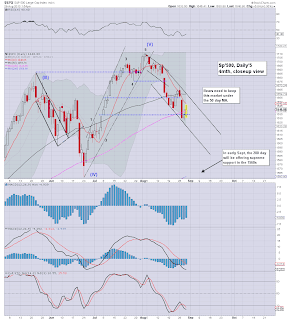 I'm just wondering if we'll set up another mini H/S formation on the hourly. In the May/June down cycle, we saw a fair few H/S formations, no reason why we can't get one now.

--
Regardless, I'm holding short the main market.
Posted by Trading Sunset at 18:55:00
Email ThisBlogThis!Share to TwitterShare to FacebookShare to Pinterest

The hourly index/VIX charts are offering a possible turn, with a rollover this afternoon. Bears should be looking for a daily close <1639, which should confirm continued underlying weakness into the weekend..and next week. 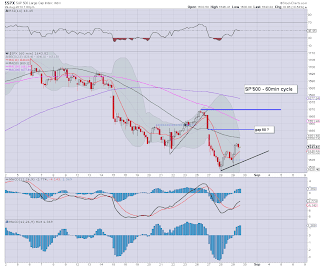 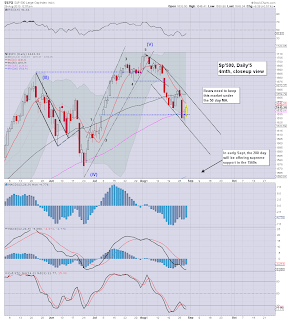 Its pretty quiet out there, so it won't take much of a news report of 'military attack imminent' to send the algo-bots into a panic.
-

For the moment, I'll gladly settle for any close back in the 1630s. 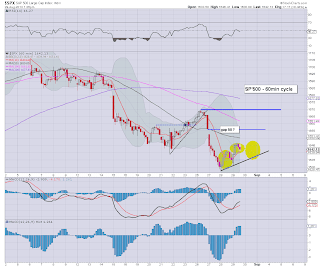 Just an idea..and a red close would arguably cancel it.
Posted by Trading Sunset at 18:00:00
Email ThisBlogThis!Share to TwitterShare to FacebookShare to Pinterest

The main indexes are holding moderate gains, with the sp' back in the 1640s. Without question, the bears should be desperate to keep a lid on this, with a close back under the 100 day MA @ 1639. Metals are weak, with Gold -$9...Oil is a touch lower. 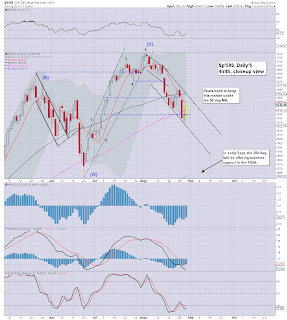 So...the bulls are making a play to get a second daily gain.

I think the bears can tolerate a 'small gain', but preferably back <1640 at the close.


Keep calm ? I think I need another tranquiliser, urghhh

time for lunch
Posted by Trading Sunset at 16:57:00
Email ThisBlogThis!Share to TwitterShare to FacebookShare to Pinterest 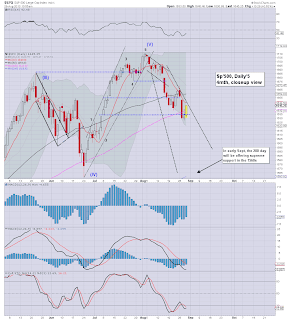 
*consensus seems to be that there will be no Syria action until later next week, so doesn't seem any point in being short across the weekend, not least for options traders.
--
Posted by Trading Sunset at 15:57:00
Email ThisBlogThis!Share to TwitterShare to FacebookShare to Pinterest 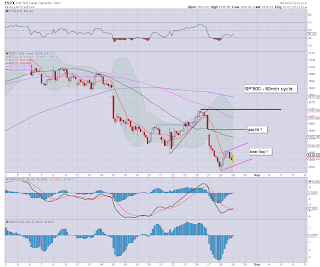 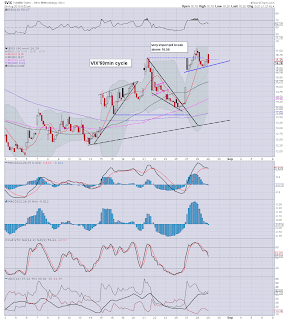 For those touting sp'1740s.. and higher..this is indeed the sort of day necessary.
Posted by Trading Sunset at 14:53:00
Email ThisBlogThis!Share to TwitterShare to FacebookShare to Pinterest

Good morning. Futures are slightly higher, sp +4pts, we're set to open at 1638. Metals and Oil are both flat. USD is +0.5% though, and if those gains hold, that will be a pressure on the market across today. Bears need a daily close in the 1620s, whilst bulls need a push into the 1650s. 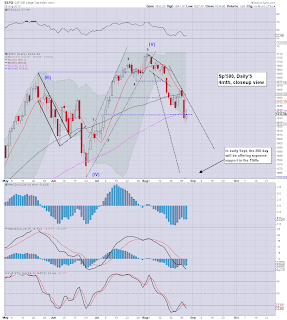 So, we're set to open a little higher, but its nothing significant, and is under yesterdays high of sp'1641.

Today is important, if we're going to see sub'1600s in the current wave, market needs to hold under the daily 10MA, currently 1650..but falling fast.
--

With no significant QE today (nor tomorrow), at least the bears don't have to worry about that.

Mr Market will be very vulnerable to any sporadic news reports about Syria today.
-

Mr Permabull is back on the gold bugs case again....

In terms of the metals, I have to agree
--

9.10am... indexes have turned lower..after weekly jobs and GDP data came in 'reasonable', and now the QE-taper fears are back.

For the bears, a fall of 1% would decisively set up Friday..and early next week for VERY significant falls..to the target zone of 1570/60s.
Posted by Trading Sunset at 13:26:00
Email ThisBlogThis!Share to TwitterShare to FacebookShare to Pinterest

Whilst the bulls managed a minor Wednesday bounce, what is far more interesting is the bigger picture. There is a very viable head and shoulders formation setting up for the autumn. For the equity 'doomer bears' out there, a H/S formation of this magnitude would be massively profitable. 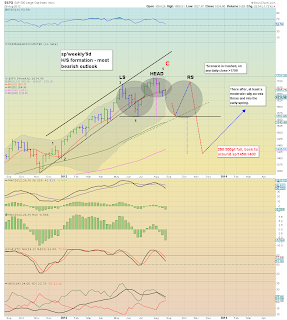 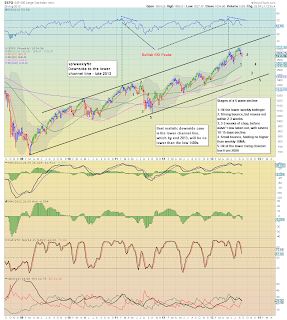 Regarding today, suffice to say, the bulls managed 4pts on the sp'500, which frankly is laughable. I remain surprised at the amount of bullish chatter out there. I sure haven't seen a market that has capitulated yet, not least with a great many issues looming for September.

Bears must see a hit of the lower weekly bollinger - currently 1563 (but rising each week), in order for the bigger H/S formation to have any validity into Oct/November.

Even then of course, any daily closes >1709 (which is only 5% higher), would mean the scenario has to be trashed. For the moment though..its looking okay.

There is the usual weekly jobs data, and also second reading/attempt for Q2 GDP - market is expecting an unchanged 0.7%.

*there is NO sig' QE tomorrow, and absolutely zero on Friday.
--

As many recognise there is a cluster of support in the sp'1625/15 zone. Bears really need to break <1610 by Friday afternoon, and that will open up the primary target zone of 1570/60s.

I find it very unlikely that we'll see a washout <1600 by this Friday (baring missiles flying overnight Thursday), but next week...most definitely, that will be the target.


Final chart to wrap up the day... 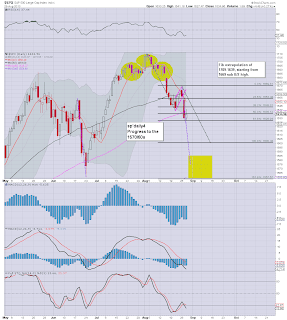 Just a few minor things on daily4', not least the reminder (if only to myself) that the current wave lower (from sp'1669) should at least be as strong as the one from mid June. As a few have noticed today, this was the second daily close below the 100 MA, something we never saw in the last cycle.

Some could fairly argue that 'things are changing in the US markets'. The rather obvious target for the current wave would be the 200 day MA, currently creeping upward into the prime target zone of the 1560s. Its now all lined up, and the bears should be looking to push strongly lower into the Friday close.


Video update from Walker (his video postings are free this week) 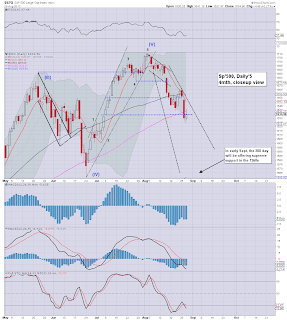 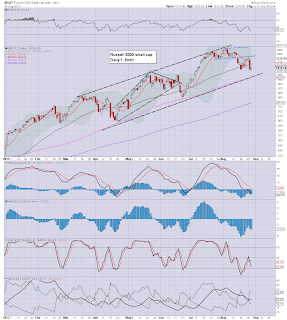 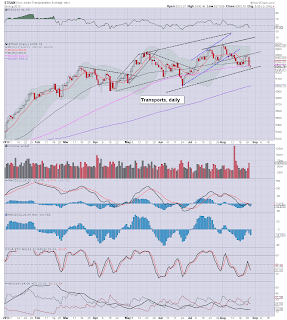