VIX claws higher into the weekend

With equities closing moderately weak, the VIX settled +4.3% @ 16.79 (intra high 17.48). Near term outlook is uncertain, and will be largely dependent on the referendum result. If the Greeks vote 'no', equities look set for another wave lower, with the VIX likely breaking into the low 20s. 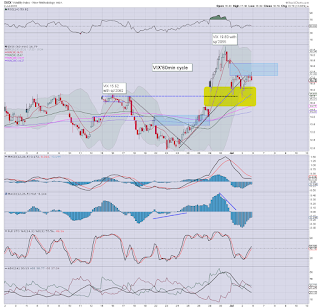 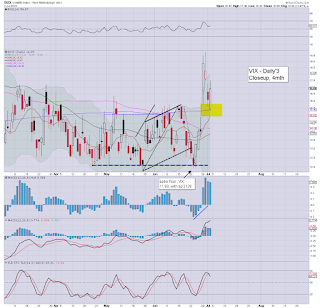 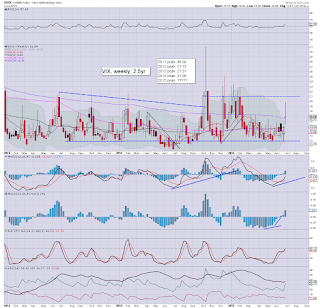 Most notable aspect of the week, VIX back in the upper teens, coming close to the big 20 threshold, with a Monday spike high of 19.80.

The bigger weekly cycle is offering increased volatility into the late summer/early autumn.

US equities closed moderately weak, sp -0.6pts @ 2076 (intra high 2085). The two leaders - Trans/R2K, settled +0.2% and -0.6% respectively. Near term outlook is uncertain, and will depend almost entirely on the result of the Greek referendum. A 'no' vote would bode for another 2-3% lower next Monday. 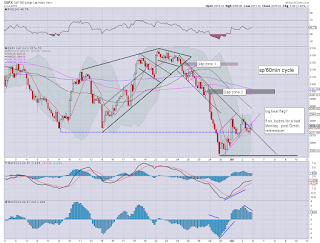 ... and the short week comes to a close!

Equity bears achieved a fair few things this week, with VIX 19s, the biggest one day equity drop in over a year, and a rather significant break lower in WTCI Oil to the $56s.
-

Of course, now its a case of how the Greeks vote.

A yes vote.. and it seems that the market will rally.

A no vote.. and we'll surely see a major wave lower across Sunday night.. with a major gap lower. The loss of the 200dma of sp'2054 would be a major problem.. and offer the big 2K threshold. Right now.. few in the mainstream are considering that scenario.

My guess? A 'no', but then... that is probably wishful thinking.

Regardless of the market/Greek nonsense...  have a good weekend!
--

*the usual bits and pieces across the evening... to wrap up the week
Posted by Trading Sunset at 21:02:00
Email ThisBlogThis!Share to TwitterShare to FacebookShare to Pinterest

US equities remain moderately weak, and look set to slip somewhat further as some of the rats will want to exit into the long weekend, with great uncertainty about how the Greek referendum will pan out. Despite a slightly weaker USD, commodities are weak, Gold -$4, with Oil -0.5% 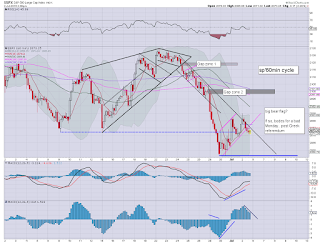 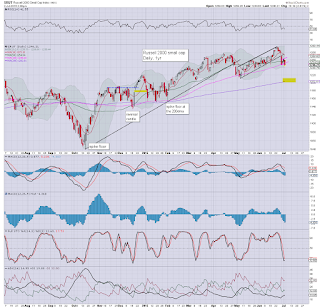 Well, its been a VERY busy week... not least after the initial Sunday night drama.

The closing hour will largely be all about traders positioning for the long weekend. I would imagine the vast majority of those hitting buttons will be inclined to the sell side.

Seriously.. who wants to go long into the weekend?
-
updates into the close...
-

US equities will be increasingly vulnerable into the Thursday/weekly close. At least some of the rats will likely sell into the holiday break, understandably fearful about a Greek 'no' vote. VIX is reflecting mild concern, +4% in the upper 16s. USD is cooling, -0.2% in the DXY 96.10s. 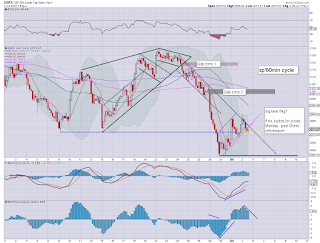 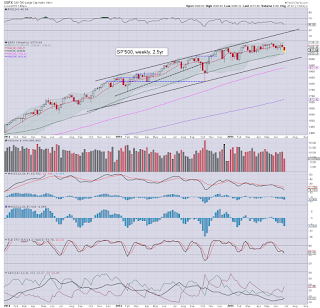 Minor weak chop... but the earlier high of sp'2085 looks a fair way higher... and out of range by the close, even if Varoufakis (Greek finance minister) says he'll be prepared to lose not one, but two arms.

Seriously... there is ZERO reason why anyone - not least the day traders, should be long across this particular weekend. There is the very significant risk of another major Sunday night futures surprise.. and this time... we would take out the 200dma.. and lose the important sp'2050s.

The giant 2K threshold is a viable target for the doomer bears next Monday.. if the Greeks vote no, and if China remains upset.

-
A bit of a mixed day in the city.. as Thunderstorms are lurking...

--
stay tuned... the rest of the afternoon should be increasingly weak... at least in theory.
-

90mins to buy.. before the Greeks save the world.. right?
Posted by Trading Sunset at 19:00:00
Email ThisBlogThis!Share to TwitterShare to FacebookShare to Pinterest

US equities are moderately lower, with the sp' having marginally broken under rising trend/support of sp'2073. Broader price structure is a viable bear flag spanning the past 3 days. VIX is reflecting some renewed market concern, +6% in the 17.10s. 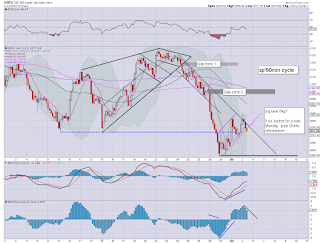 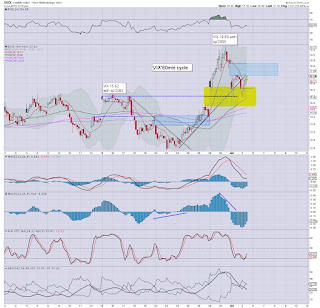 One thing should be clear... holding long across this particular holiday weekend seems overly risky.

I'm trying to refrain from counting any of the recent nonsense, but price structure is pretty clear... its probably a bear flag.. offering downside to at least the sp'2050s.

notable weakness: BAC, -1.7%... rough end to a short week
Posted by Trading Sunset at 17:54:00
Email ThisBlogThis!Share to TwitterShare to FacebookShare to Pinterest

US equities are a touch lower, as there is some natural weakness ahead of the Sunday referendum. Hourly equity cycles are on the high side, and there is probable downside into the weekly close. VIX is reflecting some renewed concern, +4% in the 16.80s. 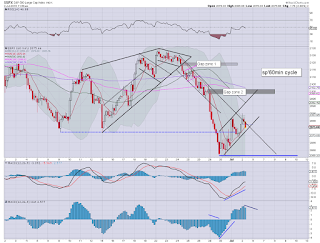 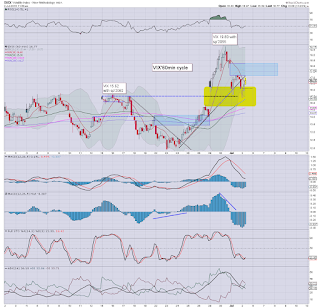 Things are starting to get marginally interesting... not least in the VIX.

A daily close in the sp'2050s.. with VIX 18s is just about viable.. it won't take much to spook more of the rats to start hitting the sell button.

I see a lot of complacency out there... despite distinct, and increasing weakness on the bigger monthly cycles. More on that though.. over the weekend.
-

12.24pm.. Provisional break of soft rising trend.... bull maniacs are in trouble now for rest of the day.

VIX confirming the market... +5.8% in the 17s.....   the 18s look due by the close.
Posted by Trading Sunset at 16:53:00
Email ThisBlogThis!Share to TwitterShare to FacebookShare to Pinterest

US equity indexes are turning negative, with the VIX +2% in the 16s. Hourly MACD equity cycle is due to slide for the rest of today, and with the uncertainty of the Sunday Greek referendum, it remains the case of 'who wants to hold long into the holiday weekend?' 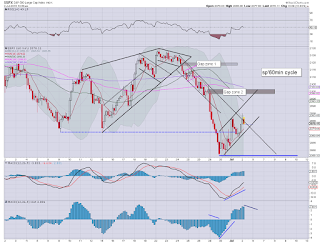 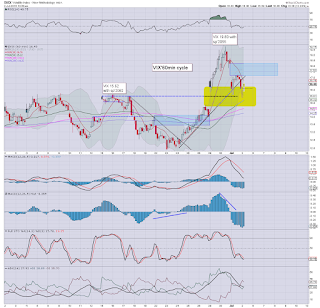 From a pure cycle perspective, market is set to slip lower... with underlying downward pressure via the obvious uncertainty of how the Greeks might vote.

notable weakness, BAC -1.1%.. as the slightly weaker than expected jobs data has some still dismissive of an int' rate hike in the Sept-Dec period.

-
time for an early lunch
-

Considering the hourly cycle... and other 'weekend' issues... increasing downside looks due.
Posted by Trading Sunset at 15:51:00
Email ThisBlogThis!Share to TwitterShare to FacebookShare to Pinterest

US equity indexes open higher, with a clear break of declining trend/resistance. Next upside target is the sp'2098/2101 gap zone, but seriously, who will not want to sell that level ahead of a holiday weekend... with the great uncertainty of a Greek referendum this Sunday? 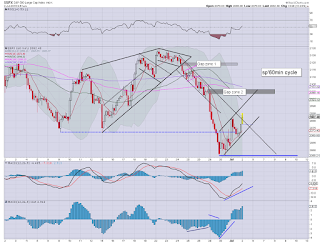 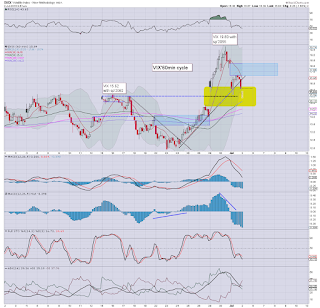 *opening reversal candle in the VIX... a slight problem for equity bulls.
--

It is a pretty complex situation...

The underlying issue across today will be one of 'who wants to hold long across the holiday weekend?'. With the uncertainty of a Greek referendum... there will surely be some significant number of the rats who want OUT before the close.

If by some miracle we're trading around 2095/2100 at the close of today, it'd arguably make for a bonus EXIT opportunity for the bull maniacs.

Yours truly is rather content on the sidelines... I really don't think the bears can look for any sustained significant downside until the mid August-October time frame. Until then... I'm even more cautious than normal.

Hmm.... traders twitchy into the weekend...


10.15am.. From a pure MACD cycle perspective.. this is a lousy setup for the bulls into the weekly close. We're due a down cycle.

Again... who wants to hold long into the weekend?
-
Posted by Trading Sunset at 14:52:00
Email ThisBlogThis!Share to TwitterShare to FacebookShare to Pinterest 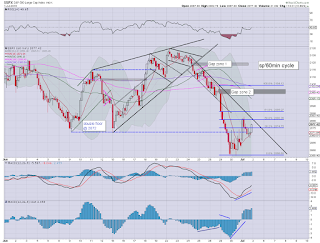 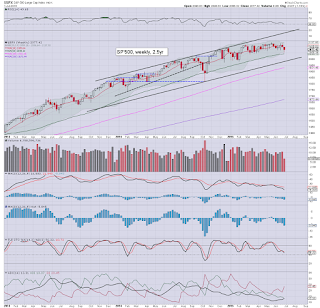 It would seem a clear case of 'it had better not be too good a number.. or good news is bad news'... in that the market would start to look toward higher int' rates in September.

I would imagine a number of 240/60k, with a marginally lower headline jobless rate of 5.4%.

Regardless of the jobs data though, market will be more concerned with the looming Greek referendum.

All things considered, I expect a net daily decline today... into the sp'2065/55 zone. Certainly, the hourly equity/VIX cycle favours the bears for ALL of today, and early Monday.

It could be a rather exciting day!

-
Overnight China action, -3.5% @ 3912. Another rough night for the retail amateurs in China, with a rather key daily close under the 4K threshold. 3400s are clearly viable within the near term. If that fails to hold.. then  2500 this autumn... an effective 50% crash across mere months.
-

Ironically, market is a little relieved the number was not too high.. sp +7pts @ 2084

With that out of the way..  market will now focus on the Greek drama.. into the holiday weekend


9.01am.. regardless of morning gains.. it will remain a case of 'who wants to hold long into the holiday weekend?'

The Greek referendum on Sunday will be a more serious threat to anyone holding long... than those short from 2080/2100 zone.

The Wednesday trading session saw further volatility for the China market, settling -5.2% @ 4053. Near term outlook remains bearish, with the 3400s remaining the natural target in the current wave. For Mr retail amateur in China.. it remains a pretty hellish time. 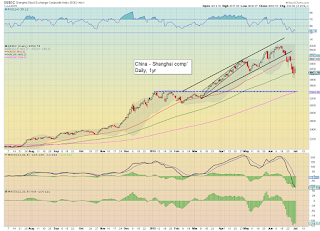 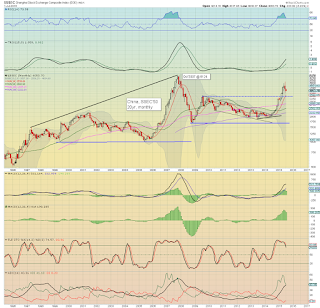 Most notable, June was the first significant net monthly decline since June 2013. The closing candle was of the bearish engulfing type... with a spiky top... highly indicative of lower levels in the coming month or two.

Thursday will see the weekly and monthly jobs data, along with factory orders data.

Since the US market is closed on Friday, there will be some distinct end week/holiday trading issues.. volume will likely be light... with price action inclined to the downside as some of the rats will want to avoid holding long across the weekend. 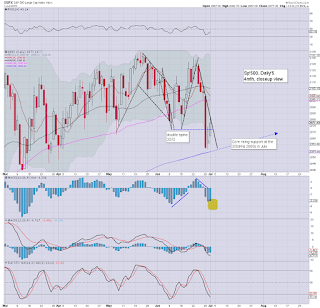 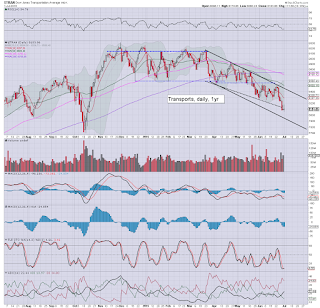 *Trans remains the market laggard, and notably broke a new cycle low today of 8060. The 8K threshold is within range tomorrow.. before opportunity of sustained upside. If 8K fails to hold.. next level is not until the Oct' low of 7700 - which would equate to sp'2K.
--

As for the sp'500, the near term downward trend remains intact... and I'm highly suspicious that the market will slip back to the 2050s tomorrow or next Monday.