It was a bit of choppy day for the market, and whilst the indexes still managed a slightly higher close, the VIX managed to hold moderate gains of  4.7 %  @ 18.42 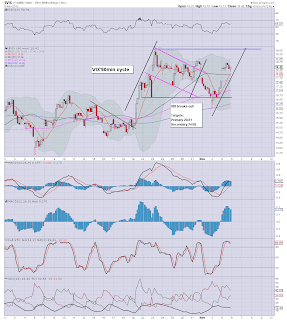 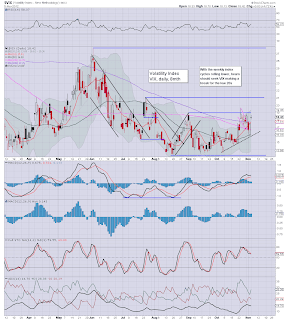 Considering the uncertainty of tomorrows election, its not entirely surprising the VIX still managed a higher close, even though the indexes were green.

The daily trend is certainly slightly to the upside, but as has been the case for a few months, until we get a daily - and more importantly, a weekly VIX close >20, any index declines are not to be trusted.

The market manages a moderately higher close, but still considerably lower than the Friday morning peak. Despite the moderate index gains, the VIX held slight gains of 3%. 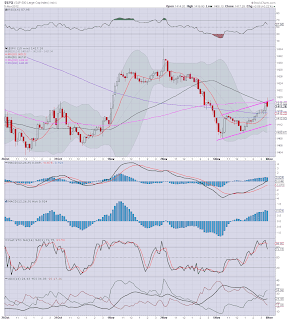 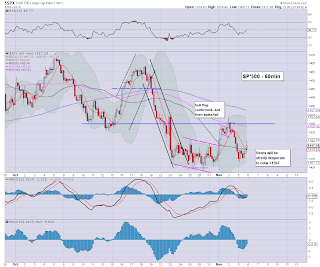 The bear flag on the 15min cycle was obviously briefly breached in this closing hour, and doubtless some would have been short-stopped out..yet again.

This market remains stuck back in the war zone from last week of 1420-00.

Weekly/monthly charts across multiple indexes - and commodities, suggest we'll soon be underneath that war-zone.

The usual bits and pieces across the evening.
Posted by Trading Sunset at 21:01:00
Email ThisBlogThis!Share to TwitterShare to FacebookShare to Pinterest

Its turned into something of a dull trading day. Early moderate declines, then flat..now fractional gains. The smaller cycles are resetting themselves, not least the 15min, which is now pretty high. The VIX is still holding onto moderate 4-5% gains. 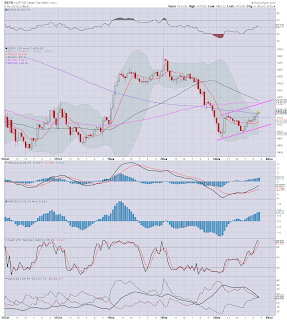 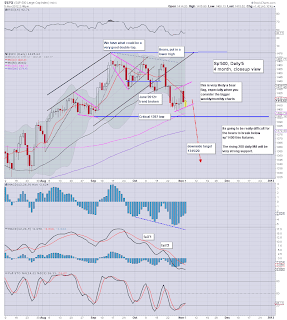 The 15min cycle has a clear bear flag, so long as we don't close >1420, bears shouldn't be getting stopped out.

Underlying price pressure should be downward, as seen on the weekly/monthly charts.

more after the close
Posted by Trading Sunset at 19:51:00
Email ThisBlogThis!Share to TwitterShare to FacebookShare to Pinterest

Market is failing to show any underlying strength. The bulls have so far entirely failed to reverse last Fridays reversal. VIX is holding onto gains of 5%, doubtless related to the uncertainly of tomorrows election. 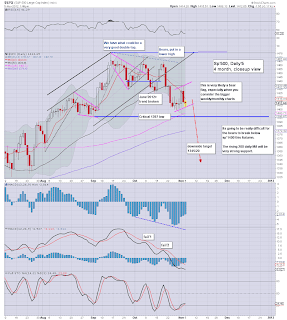 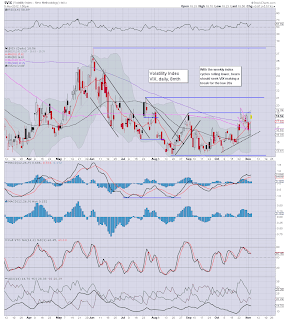 So, two hours to go, and market has very clear bear flags on those daily charts.

It remains the case, bears need a daily close under the key cycle low of 1397.

back 3pm
Posted by Trading Sunset at 18:52:00
Email ThisBlogThis!Share to TwitterShare to FacebookShare to Pinterest

The market is very much awaiting a nudge. Doubtless, the election counts a major trading variable, but we also have other things in the coming days, not least a Greek austerity vote on Tuesday. The VIX is maintaining 4-5% gains...kinda interesting. 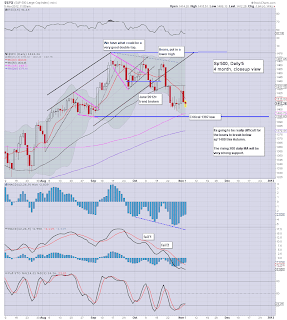 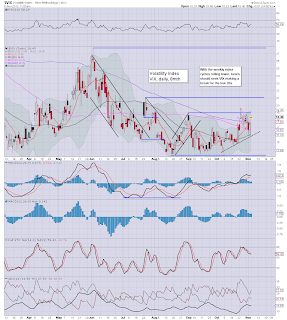 There remains a significant smell of weakness in this market, not least after last Fridays reversal.

As noted for some considerable time...sp'1397 remains the important line in the sand.

time for lunch, back at 2pm
Posted by Trading Sunset at 16:51:00
Email ThisBlogThis!Share to TwitterShare to FacebookShare to Pinterest

Good morning. As has been the case since the QE spike high in mid-September, the first target for the bears to break is the important cycle low of sp'1397. If bears can close in the low 1390s, it will conclusively be a major sell signal, and open up a fast move down to somewhere around sp'1345/20 within a matter of days. 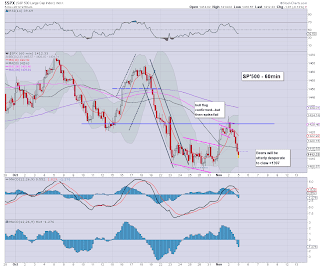 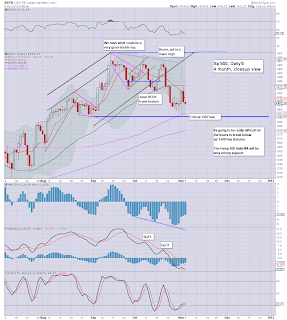 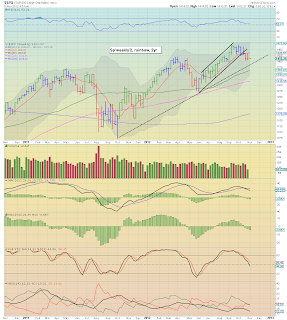 *there is a discrepency between stockcharts and my trading screen, I never really seen it happen before. but SPY' indicates we're actually sp'-4pts @ 1409, rather than just the 2pts.
---

An election week, and it was only yesterday that I read the market used to be closed on election days prior to the early 1980s. Hmm.

So, we have opened a touch lower, and now we're battling it out. The dip buyers are testing the water, I think they will need a life raft by the closing hour.

We now have the third red candle on the weekly rainbow chart. Baring a bizarre jump higher, into the 1440s, I have very high confidence we're now headed lower across this week.

Special note..
As I posted over the weekend, look to the dollar, bears should be seeking 81s within the next few days...that will open up 84 - which should in theory equate to sp'1345/20 or so.

back at 12pm
Posted by Trading Sunset at 14:52:00
Email ThisBlogThis!Share to TwitterShare to FacebookShare to Pinterest
Newer Posts Older Posts Home
Subscribe to: Posts (Atom)