With the main indexes closing a little weak, the VIX saw moderate gains, settling +7.5% @ 13.10. Near term outlook remains unchanged, with the VIX likely to remain in the 13/11 zone. The VIX looks unlikely to break above 20 until at least mid/late Jan'2014. 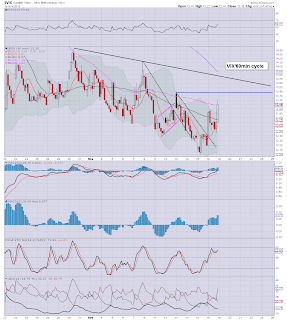 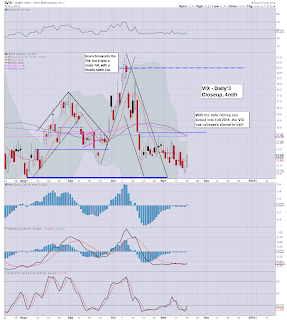 So..the VIX managed to close up, but we remain at such low levels, even a move of 10/20%..and the VIX would still be at a rather bizarre level.

As ever..on any Tuesday open, equity bears should be mindful of a black-fail candle on the hourly chart, that might suggest 'thats all folks'.

Near term outlook remains unchanged. VIX highly unlikely to break >20..until next year. Seems zero point in being on the bullish side of volatility, whether VIX calls, VXX, or the more crazy TVIX/UVXY 2x lev' instruments.
--

The main indexes closed lower, with the sp -6pts @ 1791.The two leaders - Trans/R2K, settled -0.3% and -0.8% respectively. Near term trend is over-stretched, but still broadly bullish. Equity bulls should find very strong support in the 1760/40 zone for the remainder of this year. 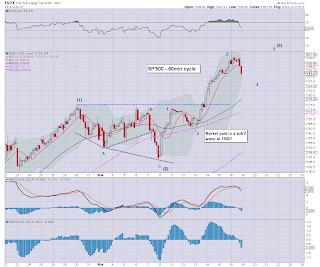 *the micro count on the hourly chart, I am very much holding to. If you also consider weekly'8, then it all kinda looks clear for the next few weeks..and indeed months.
--

Despite the weakness in the late afternoon, it was another tough day for those on the bearish side. With Dow 16000s, and Sp'1800s, another set of short-stops will have been hit.
-

With continued QE, the market remains very strong, and all micro down waves are being bought up.

The real action today was in the precious metals, and the momo stocks, both of which saw significant declines.

Nothing has changed in the 'bigger picture', and I strongly hold to my sp'weekly'8 chart outlook.
-

For the main indexes, it is just another day. Moderate gains..to new historic highs..Dow 16k, sp'1800. The two notable groups not involved in this party are the precious metals..and the momo stocks. 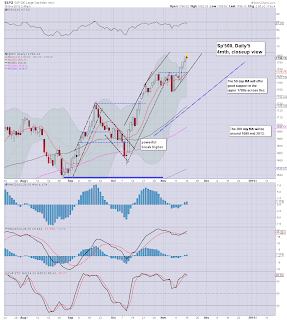 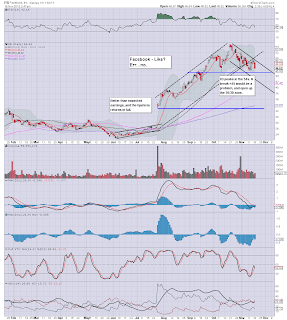 *price action in FB is starting to get real interesting.

Have we just seen a back test of the broken channel? If so..primary target is the 200 day MA..in the low 30s. That is a very considerable way lower, and would make for an interesting short-side play into early 2014.

I'm not involved in that trade yet..but...am considering it.
-

I can only say...don't get lost in the bearish hysteria. 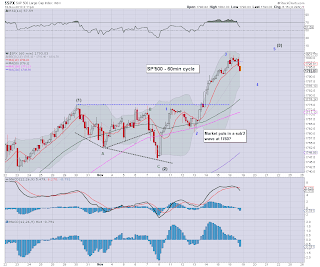 Certainly..I can only imagine 'some' of the bears touting more nonsense tonight about a collapse wave into end 2013.

Noting that VIX opex is the Wednesday open...it'd be surprising if we spike higher into that.

Bears should keep in mind..big QE tomorrow...and there is the FOMC minutes on Wednesday. A more sig' down wave looks viable next week, but even then...nothing major.


3.50pm.. Some interesting index disparity today..with the Dow a touch higher..but the tech is -1%.

Very much like we saw just a week or so ago.

Metals closing weak..and I'm guessing we see follow through tomorrow (I'm holding short, via SLV)
--
back at the close :)
Posted by Trading Sunset at 19:49:00
Email ThisBlogThis!Share to TwitterShare to FacebookShare to Pinterest 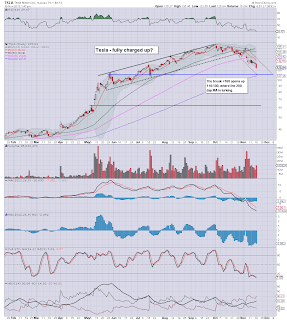 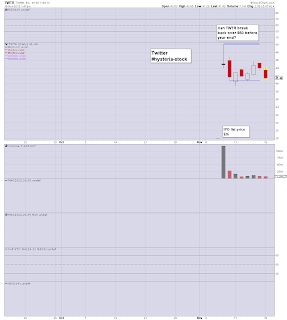 The moves in the momo stocks remain particularly interesting, not least Twitter. There has to be a lot of holders now wondering if they should sell into year end.
-

First opportunity for the equity bears remains Wed' afternoon- FOMC minutes, but then...I don't see this market as tradeable on the short side - at least not in terms of the indexes.
-

GOOG remains strong...seeing it at $1046..thats pretty impressive. How about $2500 by late 2015?
Posted by Trading Sunset at 18:49:00
Email ThisBlogThis!Share to TwitterShare to FacebookShare to Pinterest

Whilst the main market is seeing minor chop, the more interesting action is in the precious metals. Gold is -$16...with Silver -2.0%. The broader weekly/monthly cycles remain deeply negative, and the June lows look set to be broken. The mining stocks will naturally react...to the downside. 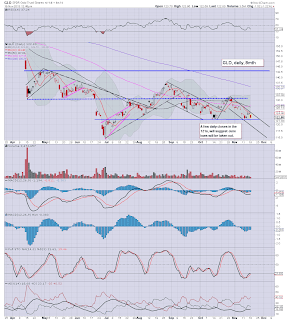 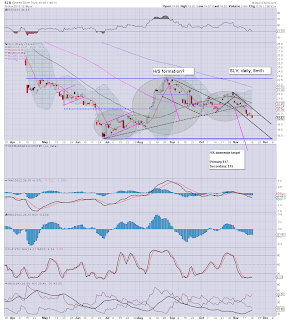 The metals remain a market unto themselves, as do the fanatical gold/silver bugs who still don't understand..and remain in outright denial.

Regardless of any minor bounces in the days ahead, the primary trend remains starkly to the downside.

I like the H/S formation idea, if correct, SLV to the 17/15 zone within the very near term.

--
*I'm short the metals via SLV, will seek to hold broadly short all the way into 2014...where Silver should in the mid/low teens.
- 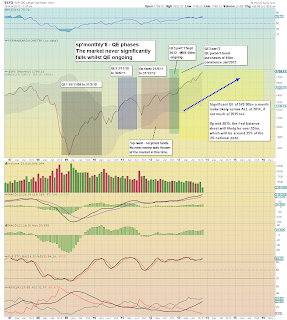 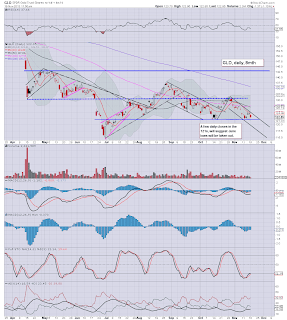 It remains the case that whilst the Fed is throwing $85bn a month at the US capital markets...the broad  trend will generally remain to the upside.

On what is a sleepy Monday...I think the following puts things into the.correct perspective

Do you see a pattern?

Ahh, so VIX opex is at the Wednesday open.  Indeed, market to rally into the FOMC minutes, Wed'2pm..and then a micro sell down..if only 1.5% or so.

Certainly..this Monday is infinately better than last Monday!
Posted by Trading Sunset at 16:51:00
Email ThisBlogThis!Share to TwitterShare to FacebookShare to Pinterest

11am update - momo stocks having problems

Whilst the main market is seeing some late morning chop - after new historic highs, the momentum (momo) stocks are having problems. FB -3%, along with the usual suspects..NFLX, TSLA. Metals remain weak, and look set for much lower levels into year end. 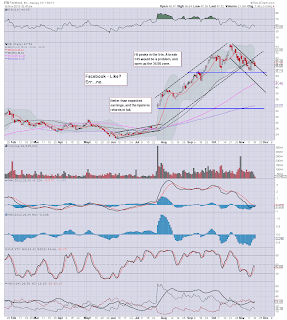 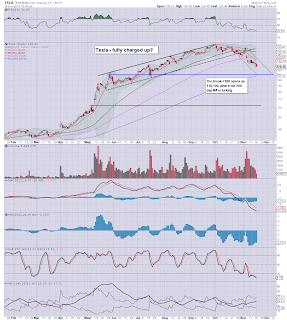 I realise for those short..this remains an incredibly difficult market, but hey...its not like any of us should be surprised after all prior instances, right?
Posted by Trading Sunset at 15:50:00
Email ThisBlogThis!Share to TwitterShare to FacebookShare to Pinterest

The main indexes open higher..with Dow 16k, and sp'1800s. The Nasdaq Comp' looks set to follow with the big 4k. Does anyone still dare contest we won't 'broadly rally' into spring 2014? Bulls have the Fed throwing another $5-6bn today at the US capital markets. 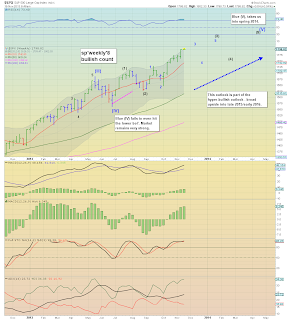 The above outlook, which I've been posting for some months looks very much on track.

The notion of a significant sell down between now and year end is simply.........nonsense.
-

Regardless...main market is fine...propped up by a double QE.
Posted by Trading Sunset at 14:50:00
Email ThisBlogThis!Share to TwitterShare to FacebookShare to Pinterest 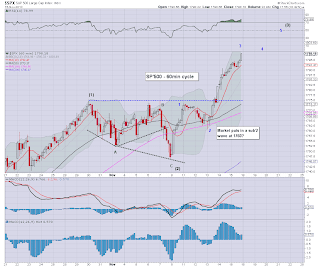 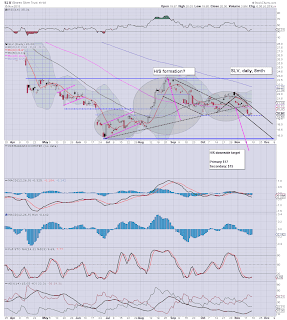 For those that managed to read most of what I posted at the weekend, you'll already know the bears face major problems this week. There are no less than TWO doses of QE-pomo today, that might total as much as $6bn.

It will be near impossible for the market to sell lower until late Wed/early Thursday, and even then, it'll most likely be no more than 1% or so.
-

*Amongst other things, I have a Silver (via SLV) short position, and continue to seek much lower levels in the metals...for many months to come.
-
Have a good week everyone!
Posted by Trading Sunset at 13:19:00
Email ThisBlogThis!Share to TwitterShare to FacebookShare to Pinterest
Newer Posts Older Posts Home
Subscribe to: Posts (Atom)