With the main indexes seeing moderate weakness across the day, the VIX had to battle hard just to break back into the low 14s. VIX closed +3.4%, settling at 14.29. Near term trend remains weak, and if the sp'500 can break into the 1700s again, VIX 12s look a given. 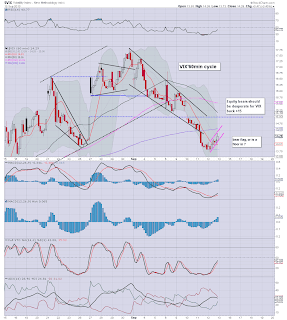 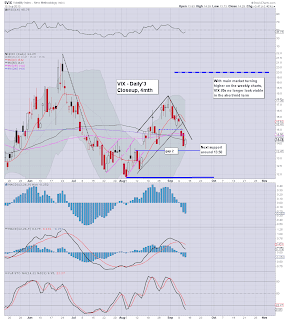 So..the VIX managed the first net daily gain since last Friday, but it was only 3%, and with the VIX at such low levels, its arguably to be dismissed as 'mere noise'.

Those equity bears seeking a major wave lower (taking out the sp'1627 low) should be desperate to see the VIX spike..and hold the 15s in the coming days.

Considering the weekly equity charts, I find it now very difficult to envision VIX 20s for some weeks, perhaps even...not until next year.

*it remains notable that in 2012 the VIX high was 27, and so far this year..the high has only been 21s
--
more later on the indexes
Posted by Trading Sunset at 23:00:00
Email ThisBlogThis!Share to TwitterShare to FacebookShare to Pinterest

The main indexes closed somewhat weak, with the sp -5pts @ 1683 The two leaders - Trans/R2K, saw more significant declines of -1.1% and -0.6% respectively. Baring a weekly close back under sp'1675, the near term trend remains bullish. 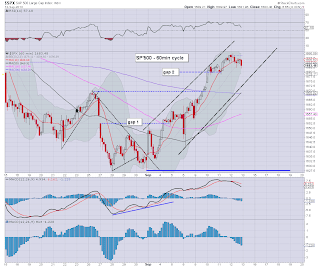 Another somewhat tiresome day of nothing. The only real action was in the precious metals market, which is having a natural major effect on the mining stocks.

It remains a marginal situation whilst we remain in the gap zone. Yet...those weekly charts remain outright bullish.

I'm guessing we still battle higher, after perhaps another day or two of price consolidation.

--
the usual bits and pieces across the evening...
Posted by Trading Sunset at 21:03:00
Email ThisBlogThis!Share to TwitterShare to FacebookShare to Pinterest

The main indexes continue to hold up, whilst the Trans/R2K are showing declines. Regardless of the exact closing level, the sp' is set to close above the 50 day MA for the fourth day.The metals remain significantly lower, with Gold -$30 or so 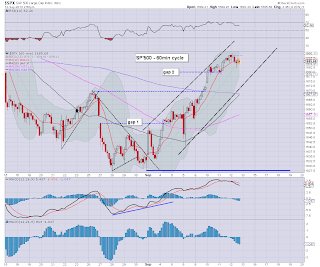 From a MACD (blue bar histogram) perspective, the hourly index charts are probably floored, with the sp' holding the first soft support of 1680.

For the bull maniacs out there, so long as the weekly 10MA is closed above (currently 1675)..tomorrow...broad near term up trend looks secure.
--

Most notable today, the drop in the metals..and the lack of any significant intra-day bounce. 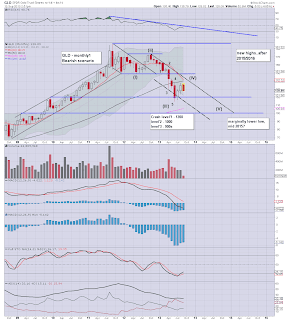 I remain seeking a mid-term floor in the $900s..before the next multi-year ramp..past 2k..and way ..way higher. Certainly, any such outlook is heresy to the gold bugs.


3.20pm..another micro-wave lower..sp'1683. Bulls should at least hold 1680 today..if not..there is a very small chance of a weekly close <1675..which would really confuse matters.
Posted by Trading Sunset at 19:53:00
Email ThisBlogThis!Share to TwitterShare to FacebookShare to Pinterest

The US indexes are somewhat mixed, with the headline sp/dow close to flat again, but the Trans/R2K are starting to slide, the latter now -1.1%. Are the two leaders warning of some trouble into the weekend? VIX is holding slight gains of 1.5% at the 14 threshold. 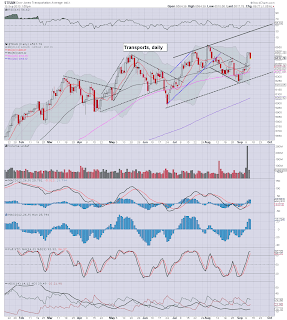 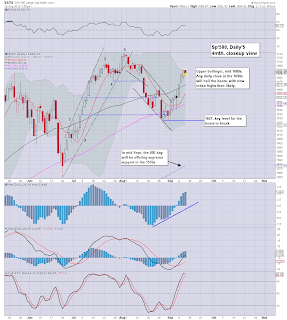 Considering the run from sp'1627, it would be understandable if the market gets stuck for a few days, not least with the big FOMC next Wednesday.

What I am focusing on remains the bigger weekly charts, which are still outright bullish.
Posted by Trading Sunset at 18:57:00
Email ThisBlogThis!Share to TwitterShare to FacebookShare to Pinterest 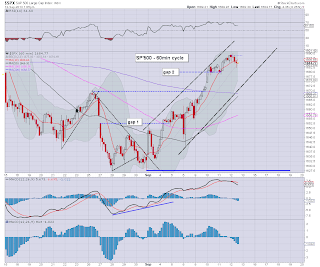 A quiet day indeed. the only issue is can the bulls manage another closing hour mini ramp?
--

Not a dramatic rebound, but AAPL is holding above the important 50/200 day MAs 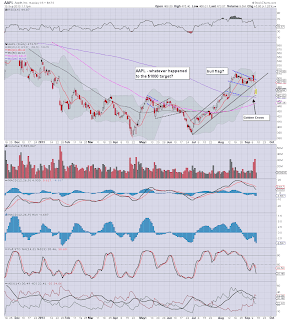 --
Posted by Trading Sunset at 18:08:00
Email ThisBlogThis!Share to TwitterShare to FacebookShare to Pinterest

The main indexes are seeing some renewed weakness in late morning, but still, the declines are only 0.2% for the headline indexes. Similarly, the VIX is higher by 1.3%. Metals are holding significant declines, Gold -$30, whilst Oil is holding gains of 0.8%. 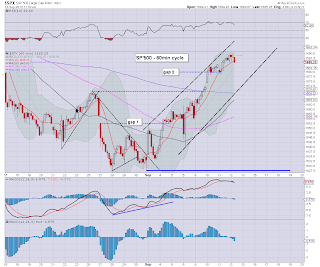 There should be pretty good support in the sp'1685/80 zone. Obviously a daily close <1680 would offer the bears something for Friday, but I don't see that likely.

If VIX was back in the 15s, I could maybe take this mornings weakness seriously.
-

11am update - a day of upside melt

The main market is again more than able to rebound from any opening minor downside. With the weekly charts pushing higher (lead by Nasdaq), there is little reason why the market won't melt higher into next week. For the bulls, a weekly close of sp'1700 is now a valid target. 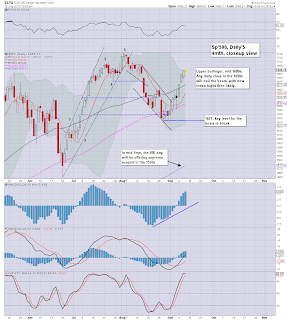 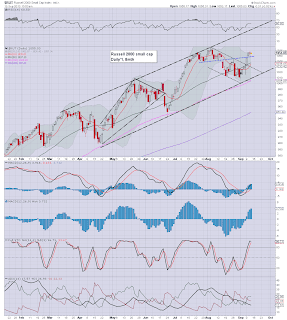 With no downside power, VIX is already marginally red.
-
Posted by Trading Sunset at 15:58:00
Email ThisBlogThis!Share to TwitterShare to FacebookShare to Pinterest

The main indexes open with a micro wave lower. Yet, there appears little if any downside power, a close in the sp'1690s looks viable. Precious metals are sharply lower, with Gold -$33. Oil is holding gains of around 0.8%. VIX is higher, but only 1.3% 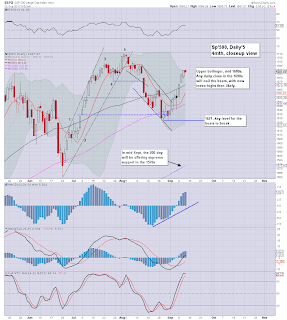 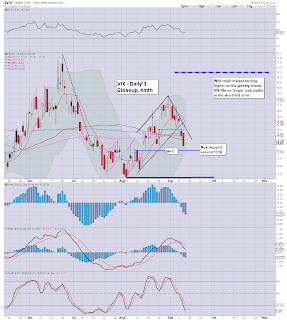 Well, its pretty quiet out there, not expecting much of today, other than the usual algo-bot melt. The fact there is sig' QE today and tomorrow..can only help.

The real action is in the precious metals, partly, the falls are technical..with a failure of near term support. 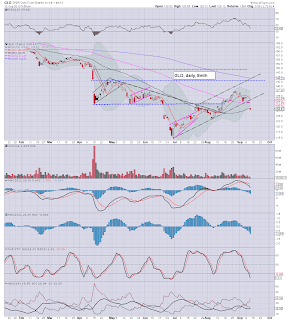 *With the weekly charts looking outright bullish now, I am long the indexes, from sp'1687
Posted by Trading Sunset at 14:56:00
Email ThisBlogThis!Share to TwitterShare to FacebookShare to Pinterest

Good morning. Futures are flat, we're set to open around sp'1689. Precious metals are sharply lower, with Gold -$29, and Silver -66 cents. Oil is holding gains of 0.7%  Near term trend remains clearly upward, and bulls should be content with any close in the 1690s. 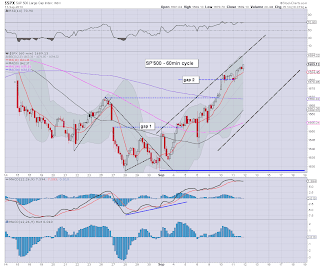 *weekly jobless claims:  292k, that is the first sub 300k number I can recall in a long time. Although now clown finance TV is reporting the labor dept' as saying the number is faulty due to reporting from a few states.
-

So..equities look set to open flat. I think there is a reasonable chance of a minor down cycle early this morning, but nothing more than 0.5%

All things considered, we should generally climb higher into the middle of next week.

The big unknown is how will the market react to any QE reduction.

*I should note that if the price action looks stable, I will look to go long-indexes this morning. Coming from me, I realise that is ironic.

Equity bears have failed to adequately contain the recent rally from the sp'1627 low. With the Nasdaq pushing new highs - equivalent to sp'1725, it is arguably time to concede that the market looks set to rally for some weeks...if not months..to come. 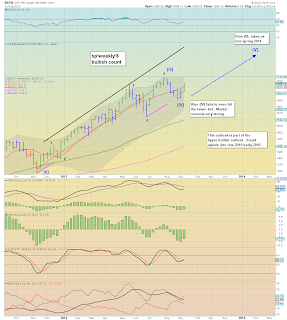 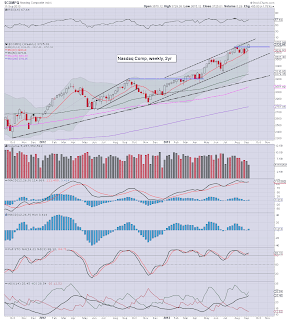 *Yours truly indeed waved the white flag of capitulation/surrender earlier today. Another failed VIX-long trade, from 15.50..bailing in the low 14s.
--

Bulls..almost fully back in control

The August declines have almost been entirely negated, and we're only a third into the month! The Dow monthly chart says it all... 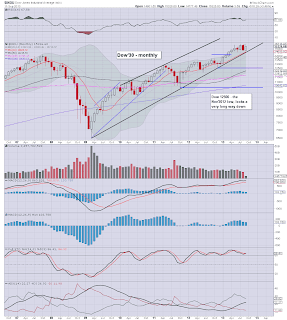 First target are the 15600s..any weekly close in the 15700s..and 16k should be easily hit. After that..well, then you'll start seeing more mainstream-media talk of 20k..by next spring.

There is the weekly jobs data, import/export prices, and the Treasury Budget (2pm).

*there is significant QE-pomo, of around 3-4bn. That will no doubt help negate any selling/profit taking, after what has been a rather powerful three day ramp.
-

So..I'm on the sidelines, and I think the bears have indeed utterly failed...again.

Right now, the notion that the market is somehow going to unravel across the next few days, err, no. .I find that next to impossible. There is simply no downside momentum anymore.


*As ever..I want to note I appreciate all comments, and regardless of what this twisted market does...I will still be here.

Goodnight from an autumnal London
-

Mr Biderman has returned from a break...

*I actually have a bizarre hunch the Fed might raise rates next week (+25bps), although that goes against what any logic would suggest. Certainly, such a rate change - even a slight one, would really surprise many.

Anyway, regardless of what the Fed does with its own interest rate, the bond yields, along with mortgage rates have indeed already risen over 130bps since early summer.
Posted by Trading Sunset at 04:00:00
Email ThisBlogThis!Share to TwitterShare to FacebookShare to Pinterest

The main indexes generally closed higher, with the sp +5pts @ 1689. The Dow closed +135pts (0.9%). The anomaly was the R2K, closing fractionally lower. Near term trend remains to the upside, and the sp'1700s look viable within the next few days. 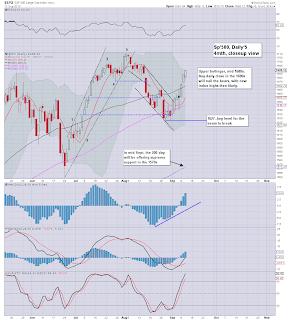 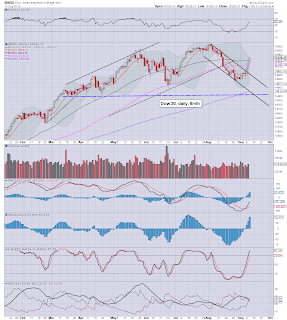 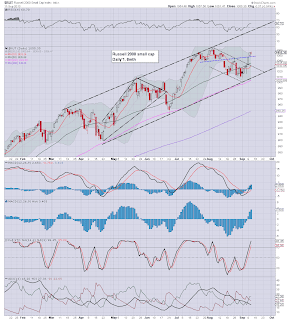 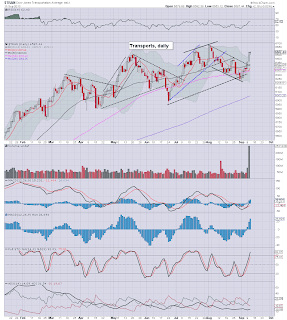 For the bulls, today's closing minutes typified what has happened since the sp'1627 low...a mere ten trading days ago.

For the bears...I think its now time to wave the white flag of surrender. The current 10 day rally looks too strong to be a simple wave B/2. Instead, this looks to be something much more significant..and new index highs...look likely.

I can't see any likelihood of equity weakness until at least next Wednesday, and even then, why would the market fall on QE-taper of 10/15bn (if any) ? QE of $70bn a month, is still a very large amount, and should be enough to prop this market up into next spring.

Bears had their chance to hold the bounce in the past few days...and have clearly failed.
--

*I am on the sidelines, and will be looking to go long-indexes, on any intra-day pull back early tomorrow.