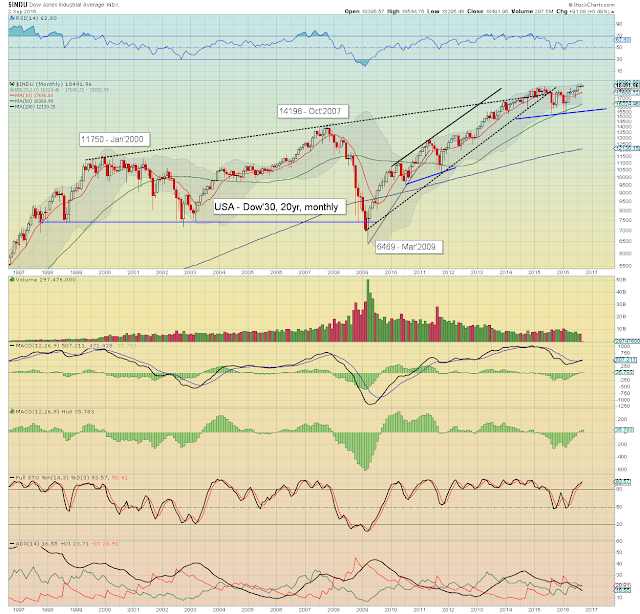 The US market was the weakest of the ten markets that I regularly highlight, with a net August decline of -31pts (0.2%). That ended the run of six consecutive net monthly gains. It is notable that the Dow did break a new historic high of 18668.

Underlying MACD (green bar histogram) cycle continues to tick higher, and is now moderately positive. The upper bollinger will be offering the 18900s by late September, with 19k viable during Q3 earnings in October.

Best guess: continued upside (if somewhat choppy), with the 19000s due by mid/late October - just ahead of the US election. Any price action >19k, should give strong clarity that the giant psy' level of 20K will be hit, whether just before year end... or a more viable early'2017.

Equity bears have absolutely nothing to tout unless a break back under the 18k threshold, which now acts as first major support.
-- 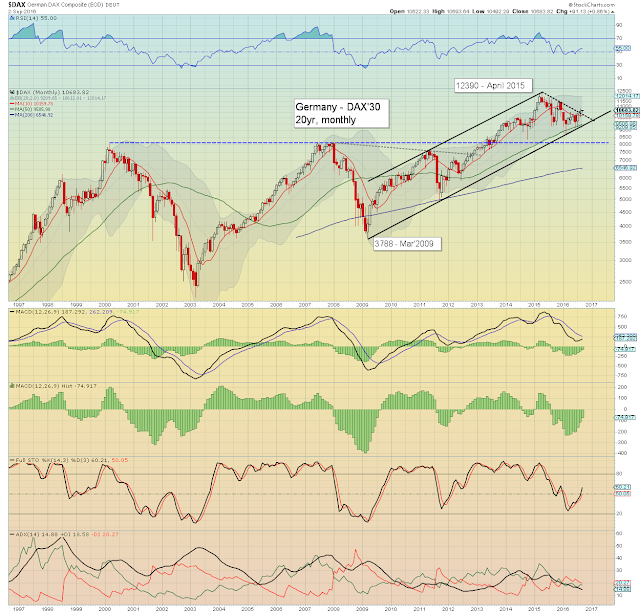 The economic powerhouse of the EU - Germany, saw a net monthly gain of 255pts (2.5%), settling above declining trend/resistance @ 10592. Next soft target is the 11K threshold, with 12K just about viable before year end. Underlying MACD cycle is set to turn positive in Oct/Nov. Things only turn bearish on a break under rising trend/support... <9K. 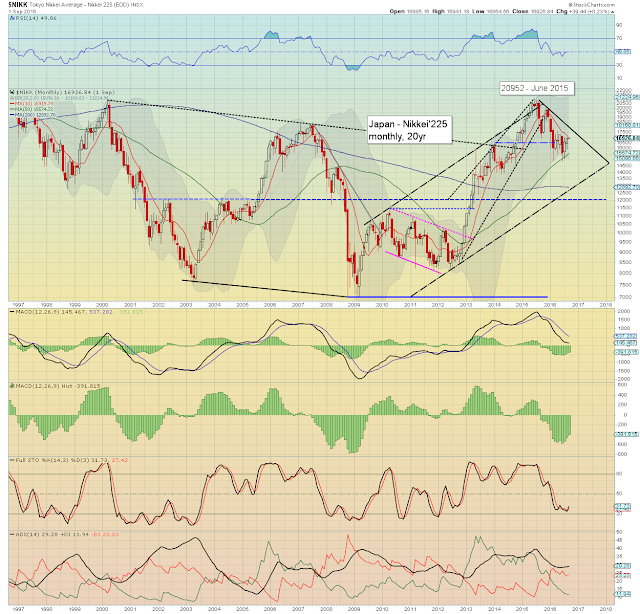 The BoJ fueled Nikkei, settled higher for a second consecutive month, +318pts (1.9%) at 16887. Broader price action remains bearish, still stuck under the key 10MA. Things turn provisionally bullish with a break >17k. At the current rate, a bullish MACD cross is at least another 4-5 months away.

The underlying issue with Japan is one of demographics, as the population is in the early phase of collapsing from a recent high of 128 million to around 87 million by 2060 - see https://en.wikipedia.org/wiki/Demography_of_Japan for some interesting details.

Either the BoJ are lying that they don't know why the monetary deflation continues, or its just some kind of societal denial. There has been talk about immigration reform (cheap foreign labor to take care of the ageing population), but for the moment, it still seems that most simply don't want to address the issue of 'lack of babies'. 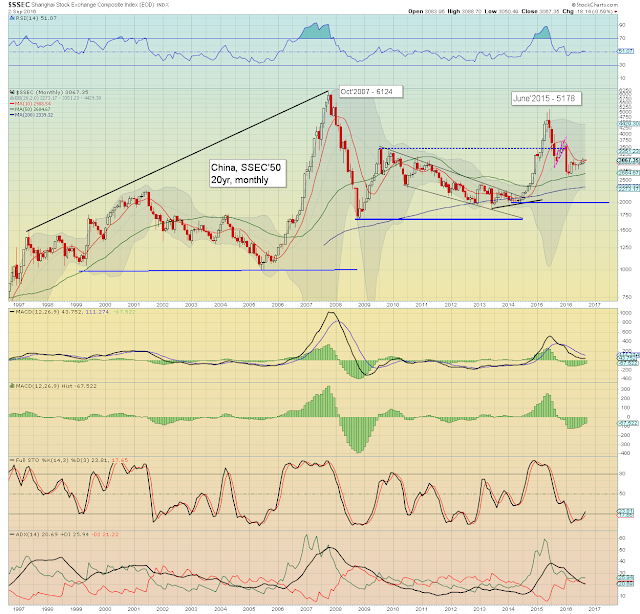 A key wild card this autumn remains the PBOC. Will they meddle with the Yuan again, as they did in Aug'2015? In addition to swaying international terms of trade, the Chinese leadership would certainly prefer to see stock prices rally into 2017. I'd imagine the communists overlords would be very pleased with anything >4K, relative to the Jan'2016 low of 2638. 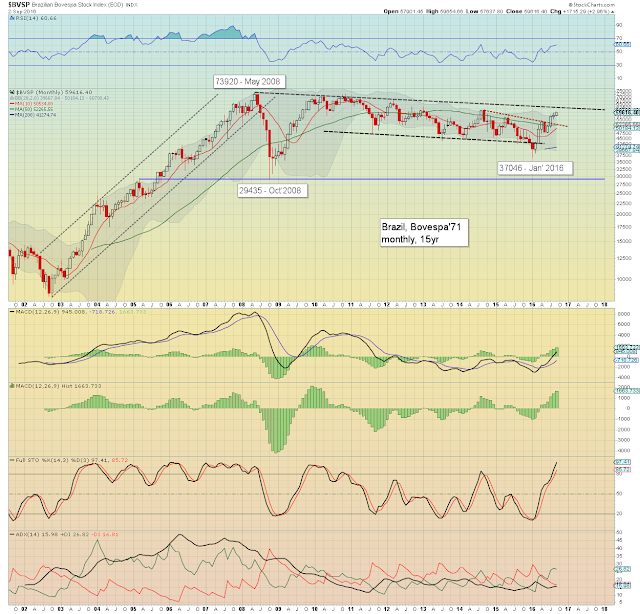 With the Olympics successfully completed, the Brazilian populace have to get back to the reality of an economy in deep recession, and with continuing political turmoil - as Rousseff just got the boot. Clearly, the commodity based economy of Brazil is going to need to see some inflation for its economy and equity market to break up and away. 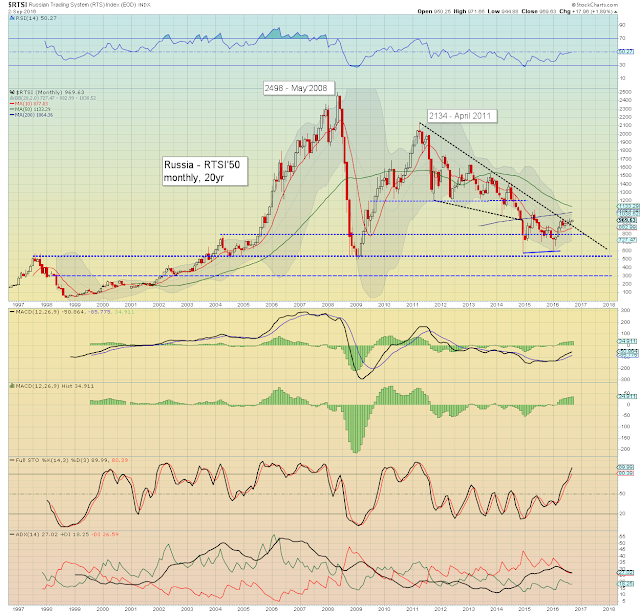 The Russian market managed a rather significant net gain of 23pts (2.5%) at 951. The psy' level of 1K remains very powerful resistance. Russia is particularly tied to oil/gas prices. If there is some renewed upside in energy prices in the months ahead, the Russian market is going to break >1K. From there, the next stop would be the 1200 threshold, which is 24% above current levels. However, even the 1200s would still be barely half of the levels from early 2011. Is Putin not under massive political pressure about what remains a collapsed Russia market? 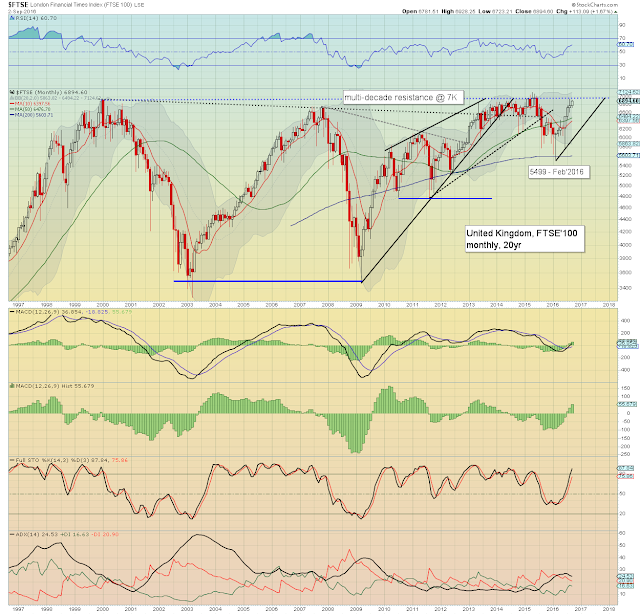 The UK market climbed for a third consecutive month, settling +57pts (0.8%) at 6781, with a notable high of 6955. It remains ironic that the surprising BREXIT result now marks a very notable spike floor candle from 6504. The 7K threshold remains massive multi-decade resistance. Any monthly close in the 7000s would be an extremely bullish sign, and offer the 8000s in spring 2017. By year end, rising trend will be around 6200, and things would only turn bearish on a break under it. 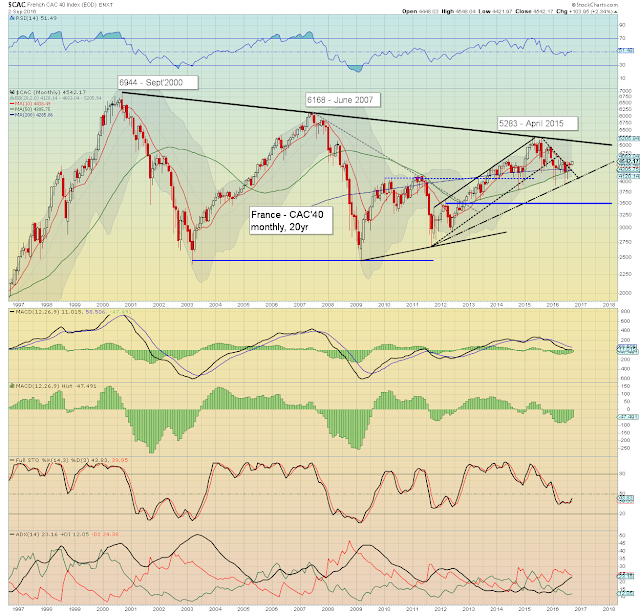 The CAC settled essentially u/c for August at 4438. There is a clear break (if sideways) of declining trend. First target is the psy' level of 5K. The April 2015 high of 5283 looks out of range before year end, but looks achievable in spring 2017. If that occurs, broader upside to challenge the Sept'2000 high of 6944 will be on the menu. 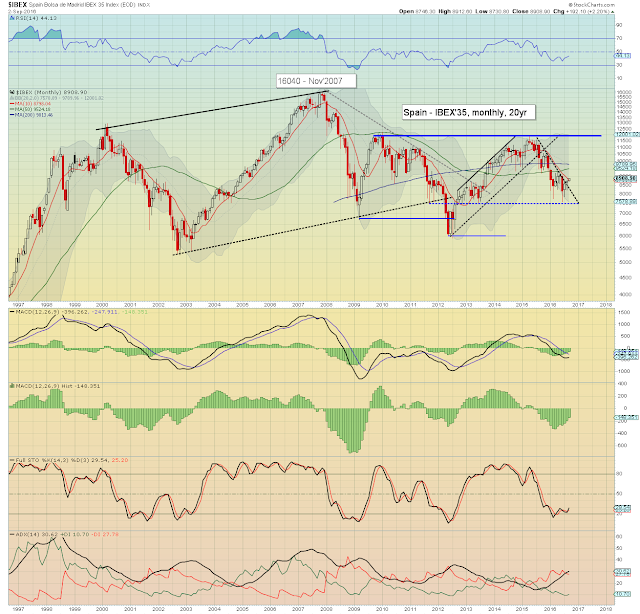 The ugliest of the EU-PIIGS - Spain, saw a net gain of 129pts (1.5%), settling @ 8716. The IBEX has broken outside of declining trend, and is currently trading just above the key 10MA, for the first time since Aug'2015. First natural upside target is the psy' level of 10K, which is some 11% higher. Far more critical is the 12K threshold, which has been extremely powerful resistance since late 2009.

Equity traders should be very mindful that if the IBEX breaks through the 12K threshold, it would bode for a further run to the 15-16k zone. From there.. perhaps a double top.. before the next financial crisis/bear market. 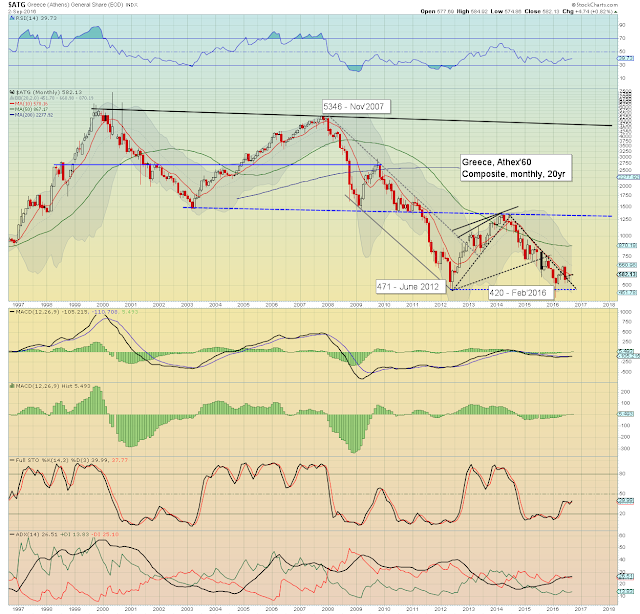 Broadly of course, the Greek economy remains wrecked. One of the more infamous news stories in recent months is the Greek Govt' are now requiring all citizens to provide a detailed list of their assets, including homes, cars... or anything 'of monetary value'. Its a classic case of a society turning in on itself. Then there is the matter of a reversion from the Euro to the Drachma... it remains a case of when.. not if.
--

The US and German markets remain the strongest, with Russia and Greece the weakest.

Most markets have broken outside (if merely sideways) from the downward trends that began in 2014/15.

On balance, it would seem world equities will continue broadly rising into spring 2017.

A relatively quiet week is ahead. With Monday closed, some traders will no doubt be taking the whole week off to enjoy what remains of the summer.

*there is a G20 conference in China across Sept'4-5th, and that could see some financial remarks directly impact the Tuesday open.
--


If you have valued my posts across the last four years, you can support me via a monthly subscription, which will give you access to my continuing intraday posts @ permabeardoomster.com

If you think I merit around $1 per trading day, then sign up! Or you could buy a really small cup of coffee.

*The next post on this page will appear Tuesday @ 7pm
Posted by Trading Sunset at 17:00:00
Email ThisBlogThis!Share to TwitterShare to FacebookShare to Pinterest 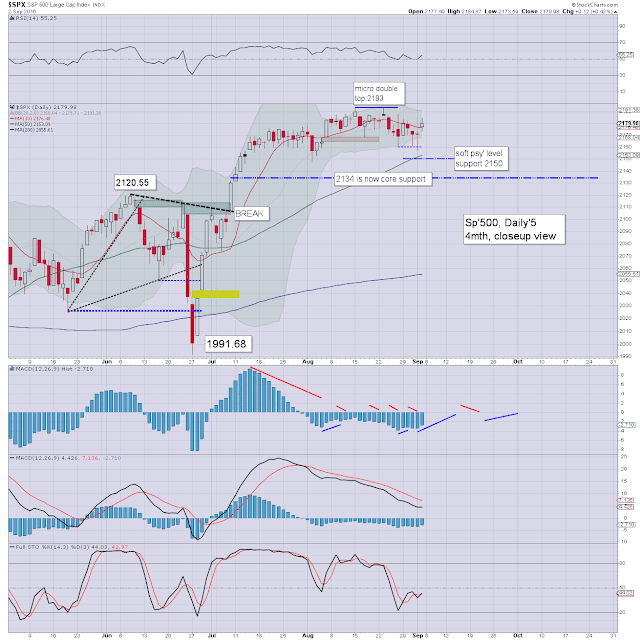 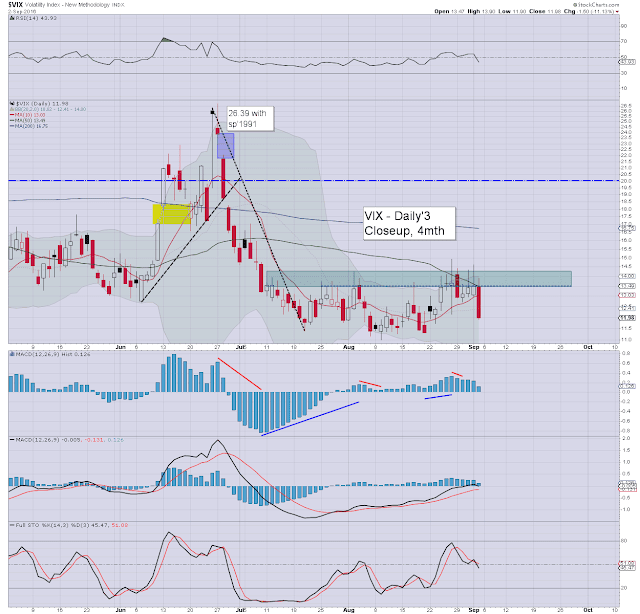 With the jobs data coming in a little under the 'goldilocks' target, the market decided that meant the threat of a Sept' rate hike could be removed from the menu. Naturally, that saw equities rally (somewhat choppily) into the long holiday weekend.

VIX was crushed back to the 11s. It is notable that the bigger weekly chart is offering single digit VIX... as low as the 7s. The key 20 threshold looks out of range for the rest of the month... as rates simply won't likely be raised until the Dec' FOMC. 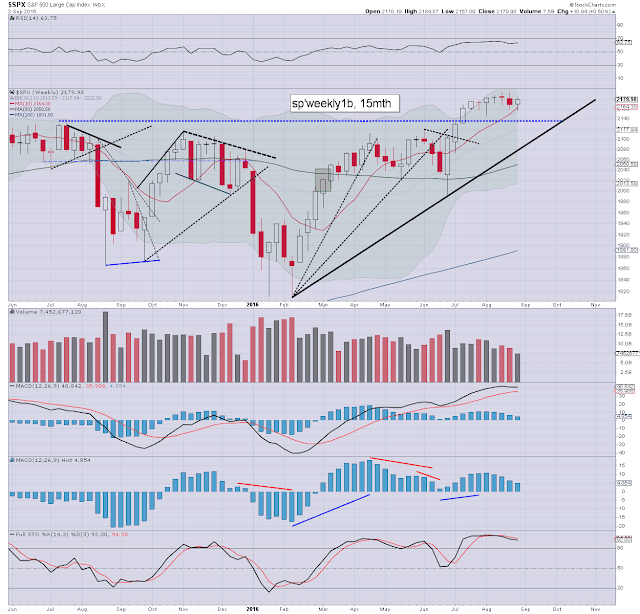 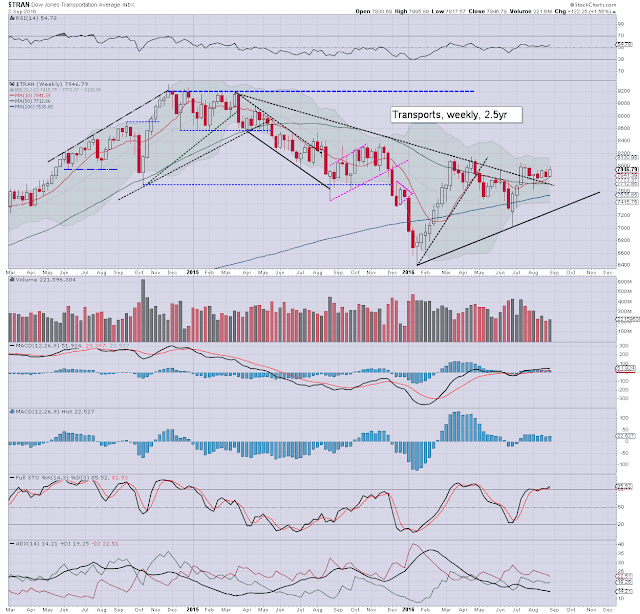 I'd agree there is always of a 'trouble' during the Sept-Oct'  trading period, but for now, any such bearish talk can be seen as crazy talk unless we're trading at least <2070.

*the weekend post will appear Sat' @ 12pm, and will detail the World monthly indexes. It remains the most important post I offer each month.
Posted by Trading Sunset at 00:00:00
Email ThisBlogThis!Share to TwitterShare to FacebookShare to Pinterest
Newer Posts Older Posts Home
Subscribe to: Posts (Atom)