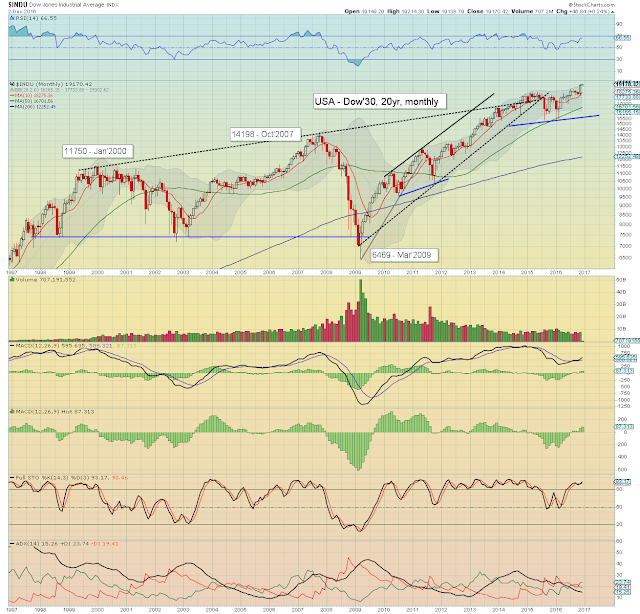 Upper bollinger for December is around the 19300s. The Dow is going to struggle to push any higher than 19400/500 before year end. Its notable that the key 10MA is now cruising higher in the 18200s.

Equity bears have nothing to tout unless the Dow trades under 18k, and frankly, that doesn't look likely for many... many months.
-- 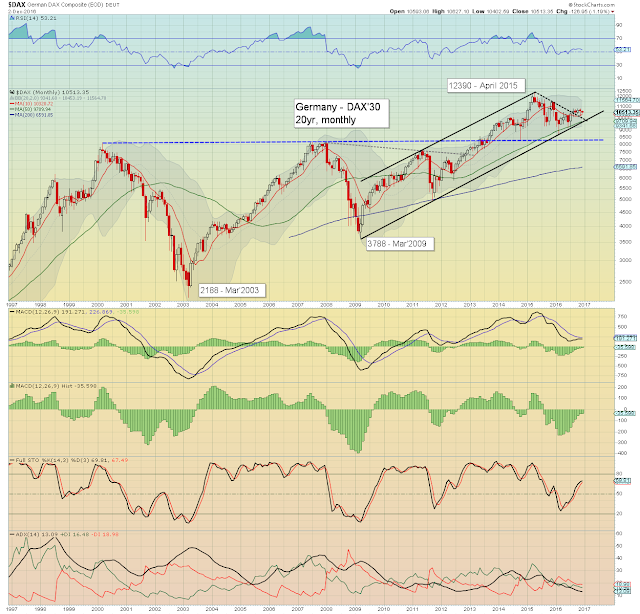 It was another month of moderate chop for the economic powerhouse of the EU, with the DAX -24pts (0.2%) @ 10640. First upside target is the 11000-500 zone. Underlying price momentum has clearly stalled, and things would turn bearish on any price action <10k in early 2017. For now... that still looks unlikely. 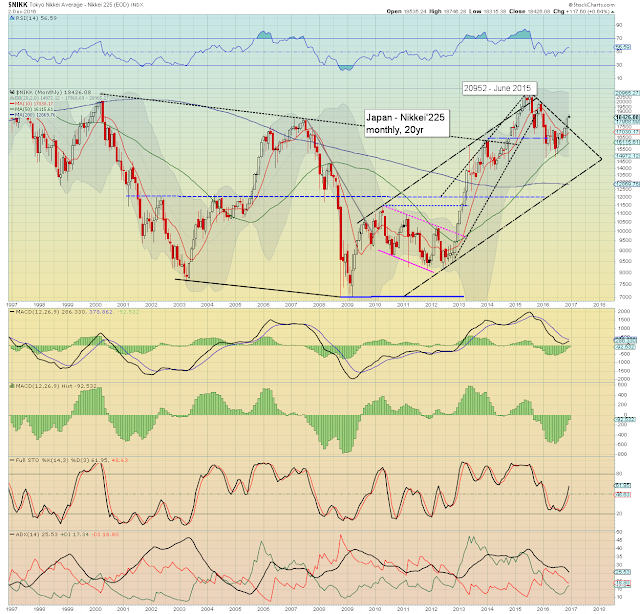 The BoJ fueled Nikkei climbed 883pts (5.1%) in November, settling at 18308, the best close since Dec'2015. Most importantly, there is a clear break above the key 10MA, and also declining trend/resistance that stretches back to the June 2015 high of 20952. The MACD (green bar histogram) cycle is set for a bullish cross at the Jan'2017 open. In theory, that does offer a straight challenge to around 20/21k by late spring/early summer 2017. 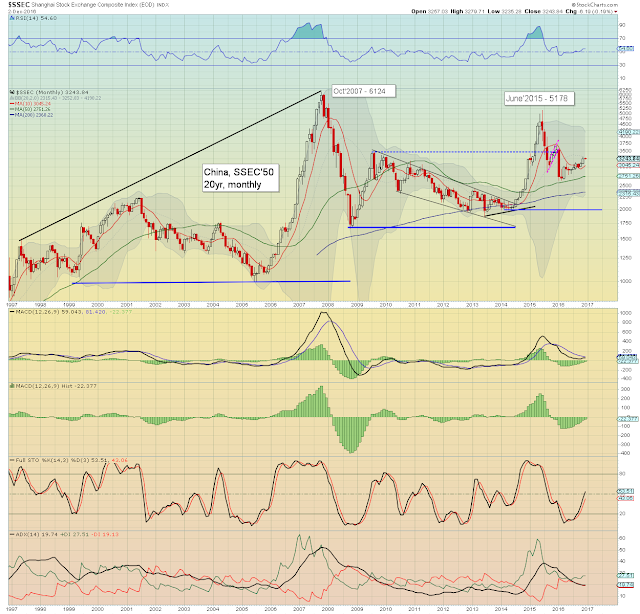 The Shanghai comp' settled higher for a second consecutive month, +149pts (4.8%) at 3250. Price momentum remains marginally negative, but a bullish MACD cross is viable in Jan/Feb' 2017. Things only turn bearish with a move back under 3k. 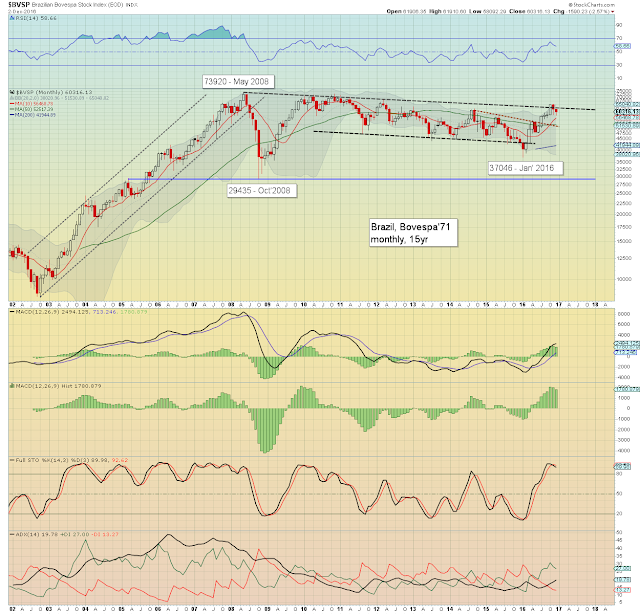 After five straight months of gains, the Bovespa saw some cooling, settling -3018pts (4.6%) @ 61906. However, that was only a relatively small retrace of the gains since June. The Brazilian market is currently net lower for Dec' by a further -2.6%, but things only turn bearish with a close back under the key 10MA in the 56000s. 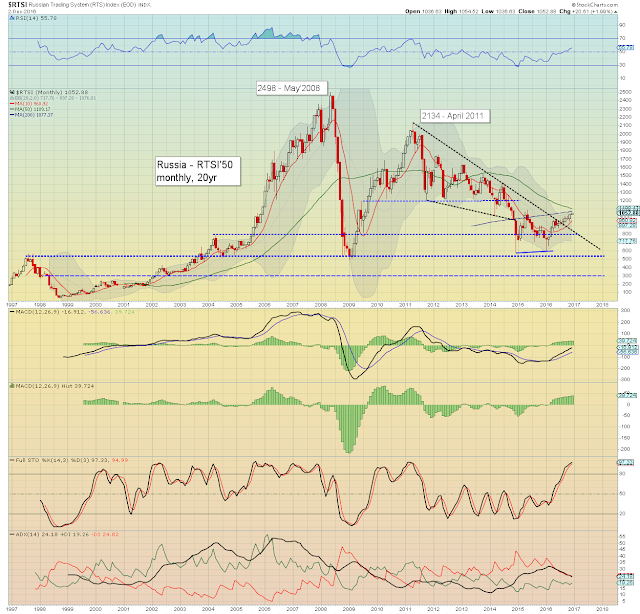 The Russian market had a rather bullish month, net higher by 42pts (4.3%), settling at 1032, the best close since April 2015. Next upside target are the 1200s, which is around 15% above current levels. What should be clear, the downward trend that spanned five years... has concluded. Interestingly, price structure/action is similar to copper. 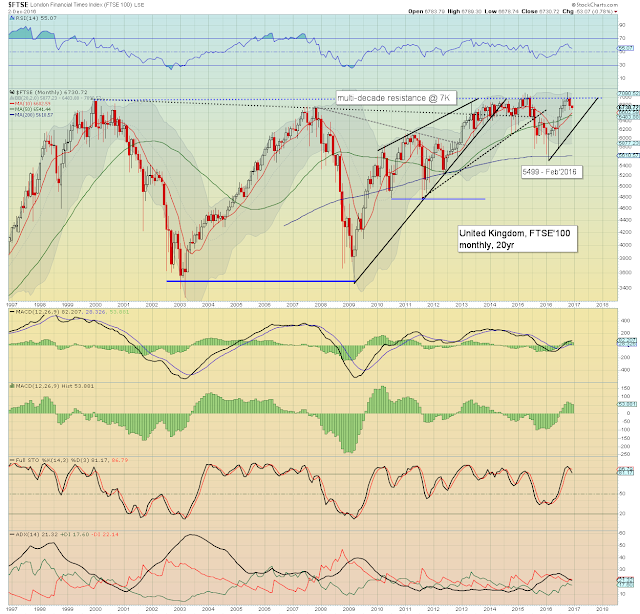 The UK equity market is still unable to attain a monthly close above multi-decade resistance of 7K, with a net monthly fall of -170pts (2.4%) at 6783. For now, price momentum remains net positive, and the FTSE is still trading above the key 10MA in the 6600s. Things would turn bearish on any price action <6400 in spring 2017. 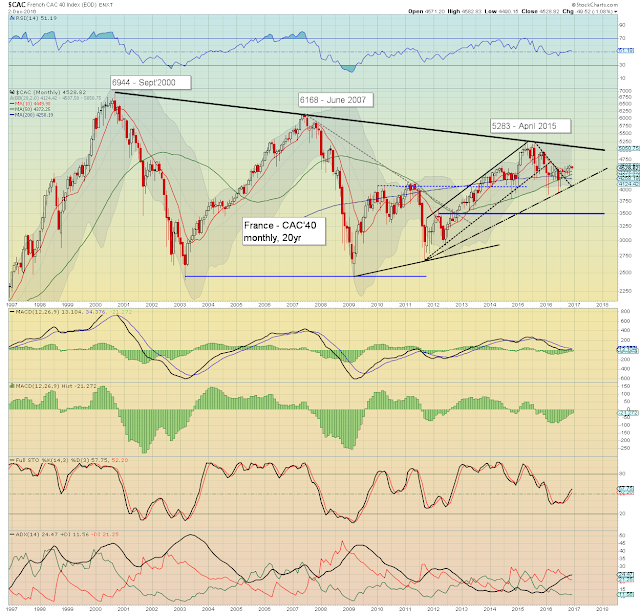 The CAC saw an intra low of 4344, but settled +69pts (1.5%) at 4578. First upside target remains the giant psy' level of 5K, which is also where declining trend/resistance is now lurking. Things turn exceptionally bullish with any price action above the April 2015 high of 5283. For now though, that is at least 3-4 months away. 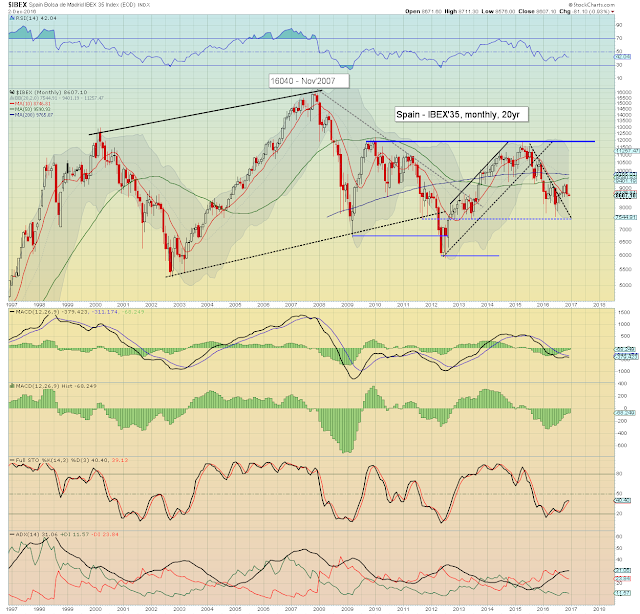 It was a rough month for the IBEX, settling -455pts (5.0%) at 8688, negating all of the Oct' gains. Price action so far this Dec' is minor chop. Things turn provisionally bearish <8500. Its notable that multi-year resistance of 12k, is now around 35% to the upside, and its tough to see that being challenged any time before next summer. 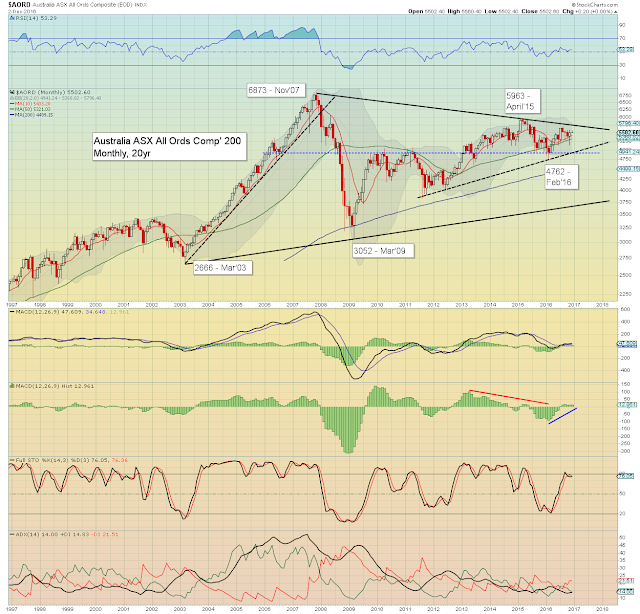 My view is that commodities are set to broadly climb in 2017. If correct, we will see the Aus' market break into the 6000s, and eventually push for a new historic high >6873.
--

November was a particularly mixed month for world equity markets.

The USA, Japan, China, and Russia are leading the way higher. Whilst Brazil, the UK, and Spain are struggling.

All world markets are holding well above their summer lows, and considering the ongoing QE from many central banks, there is little reason to expect that a key mid/long term peak is imminent.

Arguably the most important event will actually occur this Sunday, when the Italians have a referendum, which is effectively a vote to remain or exit from the EU. The UK vote to leave was very marginal, and as the Italians are unquestionably more pro-EU, I'd expect the Italians vote to remain.

If correct, Sunday night futures will likely open positive, but I would not be surprised to see the market still sell lower on either outcome.

*there are just 3 fed officials scheduled - notably Bullard, all on Monday - ahead of the usual pre-FOMC (7 day) blackout period.


You can support my work by subscribing to me. If you think I'm worth around $1 per trading day, then go hit that subscribe button. Or you could instead buy a bag of coal, to help keep warm some of your less favoured friends/relatives this Christmas.

Regardless... have a good weekend
--

*the next post on this page will appear Mon' @ 7pm EST
Posted by Trading Sunset at 17:00:00
Email ThisBlogThis!Share to TwitterShare to FacebookShare to Pinterest 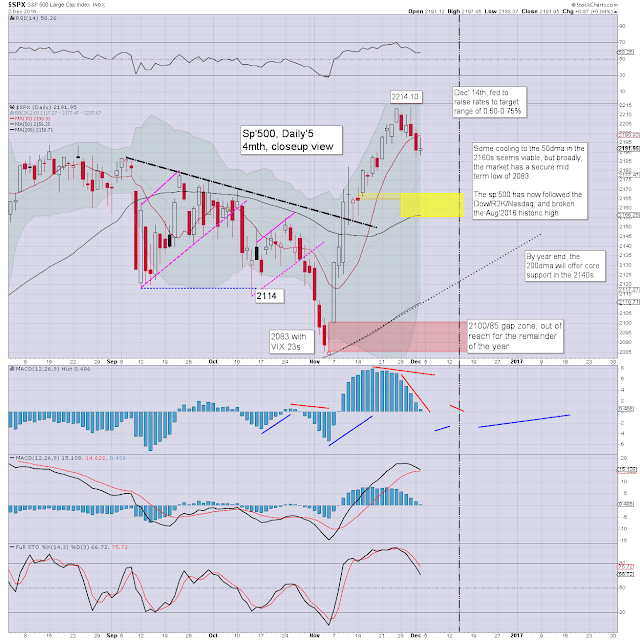 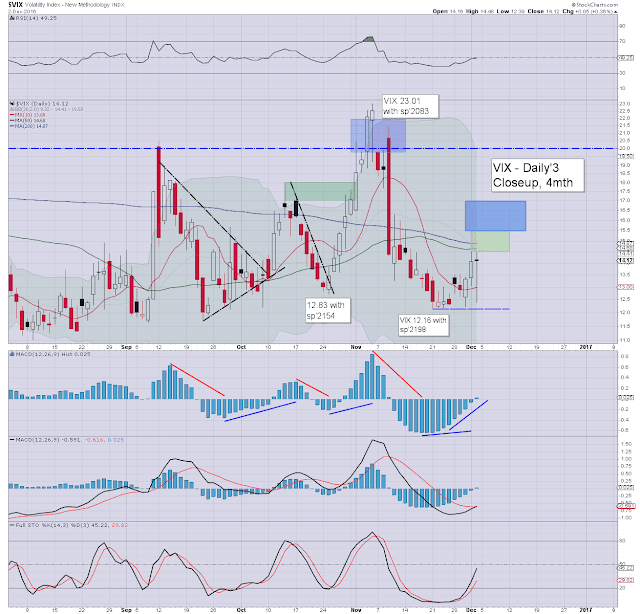 With the jobs data coming in merely 'somewhat mediocre', the market was in moderate chop mode.. but still clearly leaning a little on the weaker side.

VIX remained broadly subdued, with one of those 'kooky flash prints' in early morning of 12.39, but settling in the low teens.