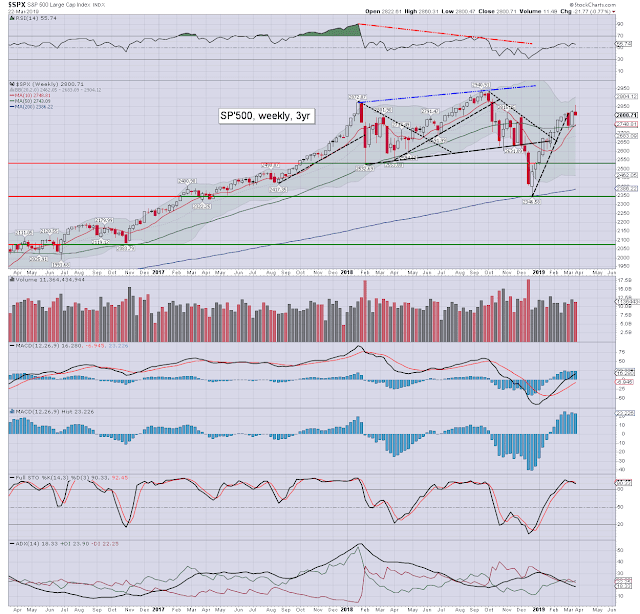 The SPX broke a new multi-month high of 2860, but ended the week on a very bearish note, net lower by -21pts (0.8%) to settle at the 2800 threshold. The weekly candle is rather spiky, and suggestive of s/t bullish exhaustion, with further cooling into end month.

Note the weekly 10MA, which will be in the 2750s next week, where there are a great many other aspects of key support. On balance, I do NOT expect a March/monthly settlement under 2750. It would still seem the market will be able to break new historic highs early summer/autumn.

Keep in mind the next key upside Fibonacci extrapolation, the 2.618x of 3048. If the market wants to mess with the minds of most, it will break a marginal new high around 3K, but not above 3048. In any case, I would look for an eventual rate cut, and see that as the ultimate sell signal.
-- 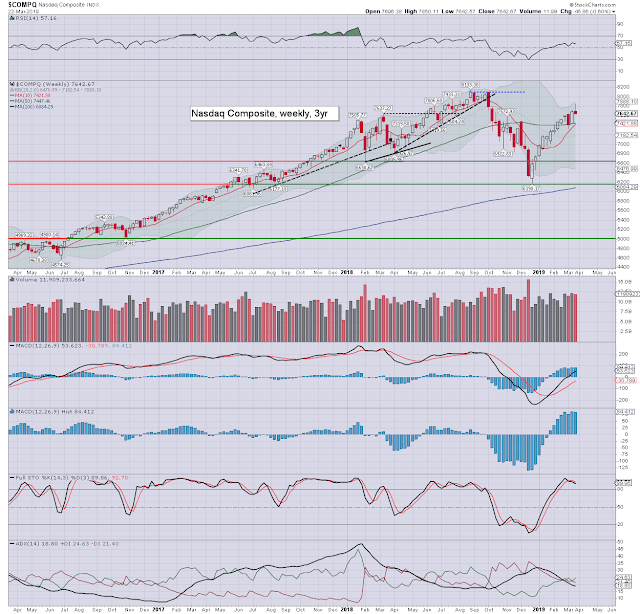 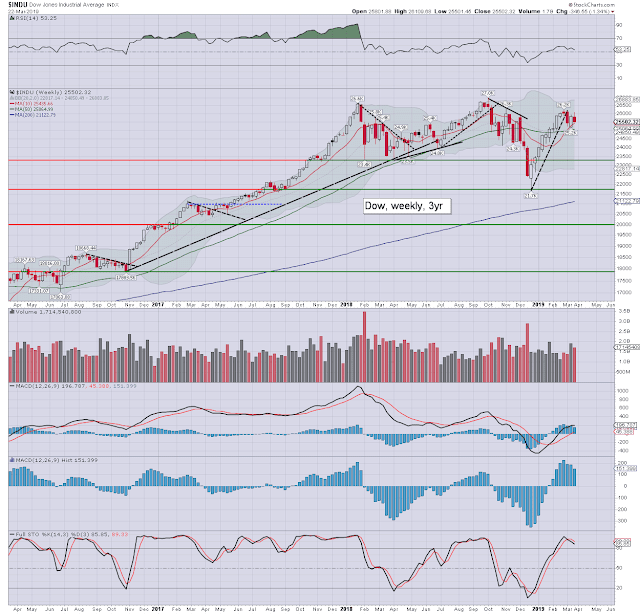 The mighty Dow saw a net weekly decline of -346pts (1.3%) to 25502. First support are the 25300/100s. Price structure across the past four weeks could be argued is a big bull flag, offering new historic highs in early summer. 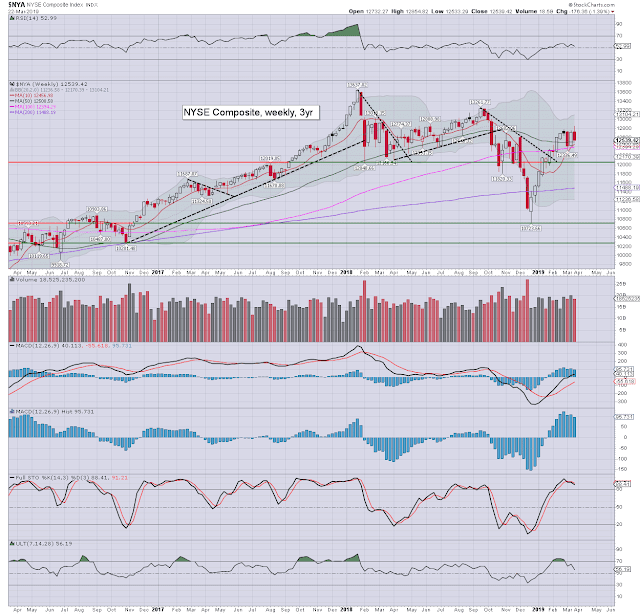 The NYSE comp' broke a new cycle high of 12854, but swung lower, settling -176pts (1.4%) at 12539. It could be argued recent price structure is a bull flag or flat top, with this week marking a failed breakout. Note we currently have two lower highs from Jan'2018. The m/t bulls really need to see >13261 to justifiably be confident for the summer ahead. 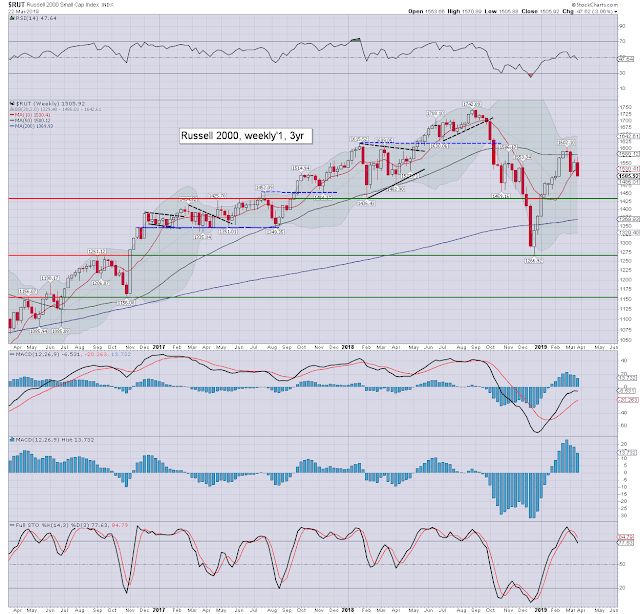 The R2K settled -47pts (3.1%) to 1505. The weekly candle is pretty ugly, and leans for further cooling at least to the 1460s. It can be argued that recent price structure is a big bull flag, but that would only be provisionally confirmed with a break above this week's high of 1570. 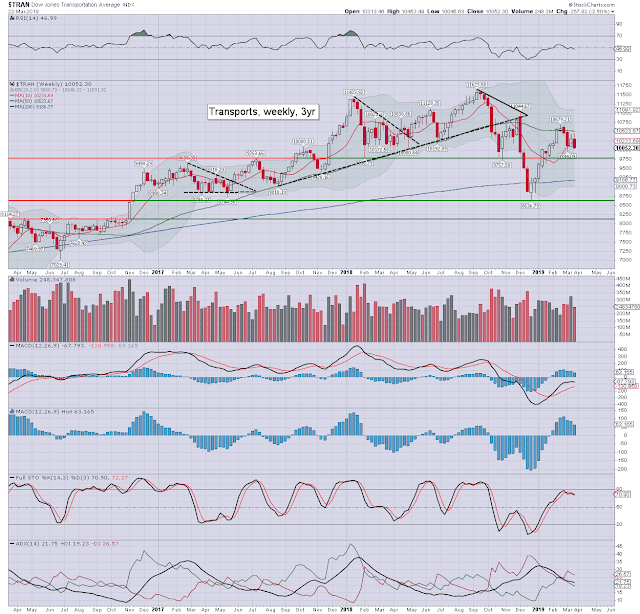 All six of the US equity indexes settled net lower for the week.

The R2K and Transports are leading the way lower, with the SPX and Nasdaq comp' resilient.

Special note: Monthly 10MA, of the six indexes, the R2K and Transports are currently on track to settle March under their respective monthly 10MA.. I don't call them the 'two leaders' for nothing, and how the collective of indexes settle the month will be very important.

*There are a fair number of fed officials on the loose next week. The market will be listening for any talk about bond yields, inverted curves, and possible rate cuts.

**BREXIT is currently still scheduled for March 29th, 11pm GMT. That will only change if May changes the law. There remains a great deal of uncertainty, and its still possible a 'people's vote' or second referendum might be held. From the numbers I'm aware of, a second vote would see the UK remain within the EU, by a margin of 53/47%.

***As Friday will be end month and Q1, expect higher volume, and more dynamic price action. As ever, the monthly settlement will be very important.
--

This past week saw Print Central announce an end date for QT. After all the endless chatter, the balance sheet is set to level out around $3.7trn by end September. We have our precursor signal to an eventual rate cut

Q. How long until the first rate cut ?

Right now, it can't be expected until after QT has concluded. So, we're arguably looking at the FOMC of Oct'30th or Dec'11th.

Q. What level of the SPX would the fed tolerate, before QE4 is initiated?

This past week's massive policy shift does make me wonder if Powell (or his successor) would spool up the printers even if the Dec' low of sp'2346 was neared.

Ideally, the next cycle would see the SPX fall to the 1500s, a natural back test of old resistance - now support, of the 2000/2007 double top. However, the monetary masters at Print Central might have other ideas, and fight back with $100/150bn a month of QE.

Ohh, and next time, in addition to US T-bonds and MBS, next on the menu will be corp' bonds, student debt, infrastructure/ 'build America' bonds, and lastly.... ETFs, REITs, and stocks. If the latter sounds like 'crazy talk', I refer you to the ECB, the SNB, and the BoJ.

With the announcement of an end date for QT, the equity bulls have just two cards left now. A possible US/China trade deal (May/June?), and a rate cut. The former won't do anything of significance to improve the US/world economy/earnings, on anything other than a very long term bass. The latter is arguably to be seen as the ultimate equity sell signal... as it was in Sept'2007.