Urgh, yet another frustrating day. Bears had the opportunity today to see follow through on yesterdays action. They failed. Totally. They even had the 10am ISM data..and still they could not whack this market into the red.

The econ-data lately remains mixed. Some has been arguably reasonable, but much remains pretty bad (Durable goods, today's ISM). Yet, even when we do get bad data it has never been enough to dampen down the market more than 1%, for more than a few hours.

Endless melt-up. Again the SP' maintains itself above the important 10MA. 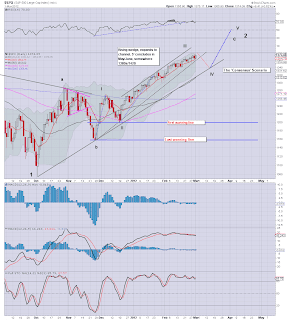 Mr $ is offering a little hope for the bears. UUP has possibly completed its down cycle. If it can hold its present level, the best case target would be $23 sometime in April. A resuming uptrend in the $ would certainly help to pressure equities (and more interestingly, the metals!) in the coming weeks. 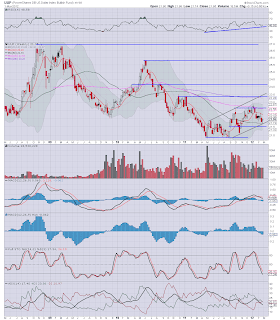 Its tense out there!

There is so much underlying tension out in the economic world right right now – not least of which is the rising price of Oil. That is going to really start annoying the summer drivers soon. $4 gas in the US seems a given within the next few months. Of course, here in the UK, gas is now around $8.50 (yeah, quit your whining Americans!), yet western Europe is admittedly not imploding. Even the average car-centric Americans could adapt to $5, or even $10 gas. 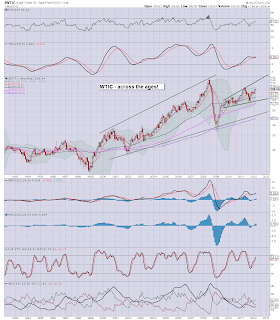 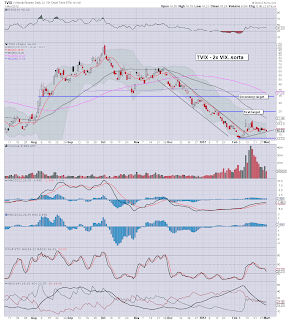 TVIX remains primed to move higher, although today's volumn was the lowest in 3 weeks. However, it remains interesting that whilst the SP' closes at yet another new high, the VIX (and TVIX) are not making new lows. The TVIX low of 14 is still a fair bit lower, and there are doubtless a lot of last-ditch stop sell-orders there.


A small note on AAPL

I have never traded it, what 'average retail person' buys a $500 stock anyway? Now, I'm no fan of the hysteria surrounding what is just another consumer tech' company. However, we have to consider the fact that AAPL is still cheap relative to the rest of the nonsense out there. When the PE for the main SP' index is around 23, AAPL is roughly half that, I have to admit its not unfair for the cheerleaders on clown channel to endorse the 'AAPL to $1000 a share, along with a $1trn market cap.

A fair few of the well known commentators out there all seem to suggest that when AAPL breaks, it will suck down the rest of the market. I can agree with that sentiment. Yet, is AAPL ever really going to go much below $400/450 this year? I can only imagine, if the market is still cruising along on near zero vol' this April, and if AAPL can post even moderately good earnings, it will be in the mid 600s. 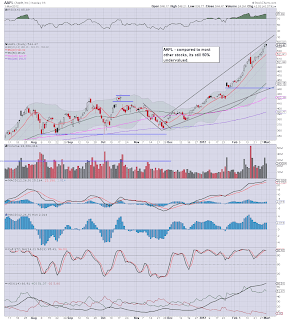 Relentless buying support for AAPL at the 10MA level, currently $521

There is no data tomorrow, no planned financial 'events', it does not look to be any good from a volatility/entertainment point of view.

It is almost the weekend (thank the gods), with the new month now well under way, we have already seen more low vol' melt-up nonsense. Right now even a 3% retracement is the stuff of dreams. Incredible.

Like many out there, I sit patiently awaiting 'something' to start off a new market cycle. Hopefully, it will be no longer than a few more days/weeks, rather than months.

Good wishes
Posted by Trading Sunset at 22:16:00
Email ThisBlogThis!Share to TwitterShare to FacebookShare to Pinterest

Is it really this simple? 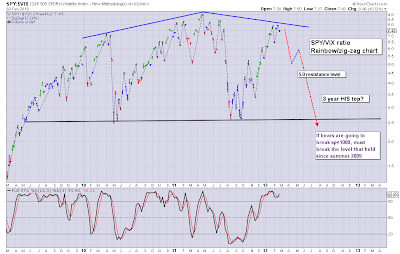 The SPY/VIX ratio chart, with 'Elder Impulse'..which I tend to call the 'rainbow chart' style.
I've tried different indexes, and they all broadly look the same, so I'll just stick to using SPY/VIX.


Is it really this simple?

Despite all the hysteria on clown channel about Dow 13k, NASDAQ 3k, and SP'1370+....is it really this straightforward? A standard H/S, suggestive of a return to lower levels?

Look at what happened each time when this thing maxed out, ohhh, that's right, April 2010 (mere weeks before flash-crash), the May 2011 high, with the following end July 'twelve days of fun' rollover. Anyone fancy hitting the 'buy' long button whilst looking at that chart?

Of special note, the 5.0 level, if we only get a minor retracement in the coming days, I'd look to that level as to where the breaks come on and when the algo-bots start buying up every move lower.


*For details on what the zigzag chart style is about...
see: http://stockcharts.com/school/doku.php?id=chart_school:technical_indicators:zigzag

Hope these two mini bonus posts of the day were interesting, don't forget the two earlier ones though!

Goodnight
Posted by Trading Sunset at 03:12:00
Email ThisBlogThis!Share to TwitterShare to FacebookShare to Pinterest 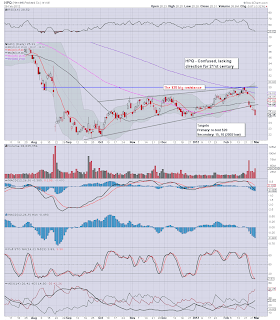 I really don't follow the company much, but considering the market has barely started even a moderate decline, its looking like it has a real problem right now.

Arguably, the place to short would be on some kinda re-test, on that old trend line around the $27 level. Might happen. Its already had quite a nice down cycle, so chasing it, might not be such a great idea.
Posted by Trading Sunset at 02:59:00
Email ThisBlogThis!Share to TwitterShare to FacebookShare to Pinterest
Newer Posts Older Posts Home
Subscribe to: Posts (Atom)