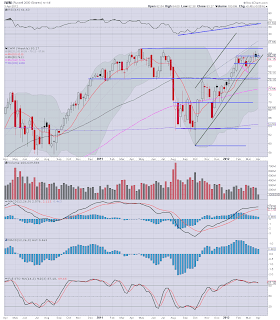 IWM remains really still stuck under the important 86 level. In the next wave up..it will be paramount for IWM to catch a real surge and decisively break through this level. A break over 86..should open up 90/92 (at least). The Fib' level suggest...105 - which right now of course, seems impossibly out of reach.

Near term, IWM really should not break under the 81 level. 82 might be as low as we go - today's closing hour rebound may support that idea.

What is clear, a break under 80, opens up 76..and a whole lot of trouble for the still upward trend in the monthly cycle. 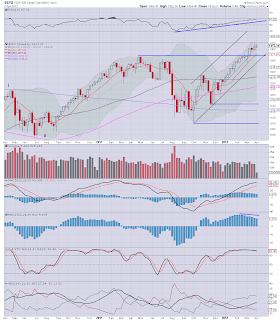 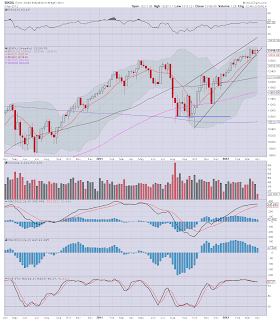 The lower channel line is probably drawn a bit tight. It should probably include the 13,000 level. So, I'd say only a move under 13k tomorrow or Thursday would be a problem for the bullish case.

Today was interesting to watch, but still..its all minor moves. There really haven't been any major down days occurring yet. I'm guessing - especially if you look at the IWM chart, its all just a giant inverse H/S formation, and we'll explode upward starting next Monday. If that's the case of course, then the bears who are getting mildly hysterical will be furious, dismayed..and again, see their positions wiped away.

I intend to go long no later than the Thursday close. Its certainly not a risk-free trade, across a 3 day Easter-bunny weekend, but if the 60min cycle is really low...I'll play it Long. Until the bigger cycles turn lower, the default trade (at the base of every 60min cycle) remains Long.

More later...perhaps.
Posted by Trading Sunset at 23:00:00
Email ThisBlogThis!Share to TwitterShare to FacebookShare to Pinterest

well that was quite an interesting post FOMC bit of action...

IWM finally snapped lower, but the closing hour saw a little rebound. I've added a few possible channel lines - maybe we're in an expanding wedge, with a lower channel as low as 80.00 by Thursday 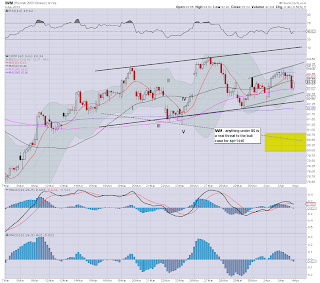 The 60min momentum could easily crawl lower all of Wednesday.

Provisionally speaking, this last hour up seems like a fake-out, looking for new lows tomorrow, probably at least down to 82.00
--

*to be clear, I still think this is just another cruel tease to the bears, with major up moves next Monday onward.

more later!
Posted by Trading Sunset at 21:06:00
Email ThisBlogThis!Share to TwitterShare to FacebookShare to Pinterest

Whilst his highness.. Lord Obama is speaking live, via clown channel...lets take a look at the sp' 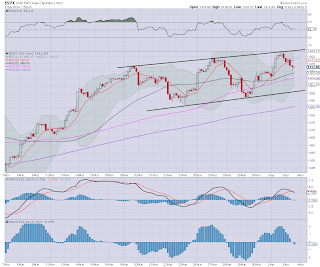 Its possible we might get a little bounce for a few hours late today/Wednesday..but that the full cycle will floor out by Thursday.

Patience...its something I still struggle with..but so far today,,doing okay...doing nothing :)
Posted by Trading Sunset at 18:19:00
Email ThisBlogThis!Share to TwitterShare to FacebookShare to Pinterest

Well the Factory orders data is out of the way....next up ...ADP jobs data tomorrow morning.
-

15min cycle floored - from a momentum view
60min cycle...could trundle down ALL day..and into early Wednesday.
- 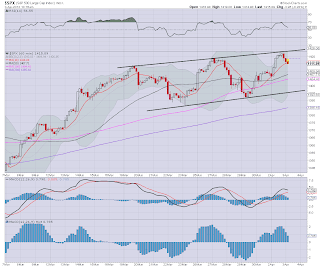 Only a move under 1400..preferably 1395 would be moderately bearish.

The BIG weekly and monthly cycles are still saying UP UP UP.

*also a special note, all those monthly world-index cycles I covered at the weekend, many are indeed going + cycle, and triggering buy signals for those algo-bots.

**world indexes are also floored on the daily cycles.
-
Posted by Trading Sunset at 15:20:00
Email ThisBlogThis!Share to TwitterShare to FacebookShare to Pinterest

There is a fair bit of chatter out there at the moment, bears are obviously desperate for a down cycle..we might get one across the next few days (ala' holiday reversal), but it might only be 2%.taking us back to sp'1410/05.

The notion that we fall anything more than 3-4% seems...unlikely. We have the jobs data on Friday, so if we do sell off a tiny bit..and we're hovering around 1400/05 - with the 60min cycle floored, I'll be a buyer there. 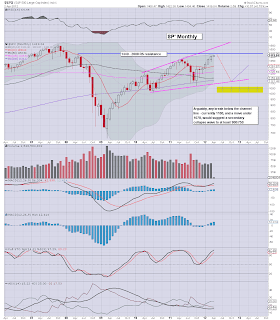 Here is a really simple chart, clearly the current cycle remains UP. However, we're now at month number'7 into this cycle, and you can see the previous up cycles were roughly this kinda length -before a multi-month retracement.