Volatility ends the week with some gains

Whilst the main market saw choppy, but moderately weak price action, the VIX managed to hold moderate gains into the weekend, settling +5.3% @ 13.41. Across the week, the VIX gained 12%. Near term outlook is for VIX 14/15s on Monday, before a minor pull back into opex. 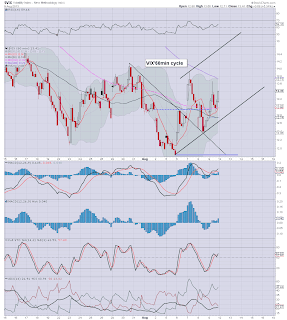 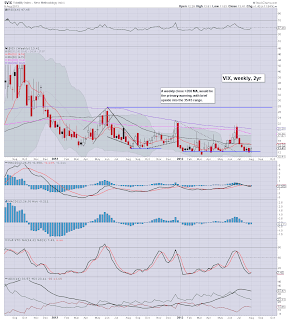 So..not only did the indexes close moderately lower, but the VIX actually managed to hold onto some gains.

Certainly, we're only talking about 5%, and the VIX remains in the lowly 13s. This remains a fearless market.

Best guess, Monday morning, sp'1670s..with VIX spiking into the 14/15s, and that will probably be the best levels of the week for the bears.

The main indexes closed moderately lower, on what was a relatively choppy day. Best guess is a sub'C wave on Monday to hit the sp'1675 target. The weekly charts are looking for downside into September, into the sp'1600/1550 zone. 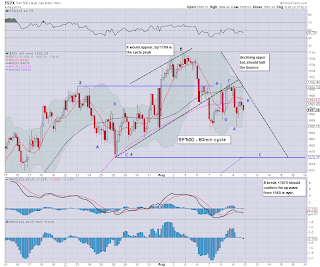 So..if anything, at least the weekly charts closed marginally bearish.

*I hold short across the weekend, seeking an exit at sp'1675

next main post, late Saturday on the US monthly indexes
Posted by Trading Sunset at 21:01:00
Email ThisBlogThis!Share to TwitterShare to FacebookShare to Pinterest

The market appears stuck around sp'1695, but that is a mere decline of 0.2%. Hourly index charts are still suggestive of a C wave to come..and the target remains 1675 - but clearly, that is not viable until next Monday. VIX still looks set to move into the 14s. 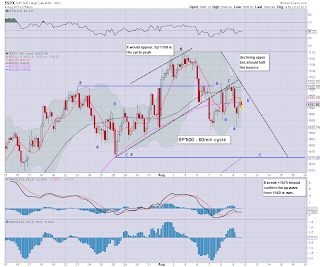 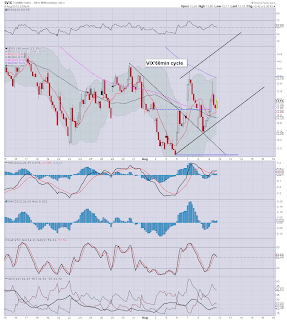 For the bears, a frustrating day..and week.

The market remains a mere 1% below the all time high of 1709 from last Friday.

The notion that some sort of 'big multi-month' decline has begun...is likely nonsense.
-

*I remain on the short side, and seeking an exit around 1675 on Monday morning.

As it is, most of next week looks a write-off for the bears, especially the latter part.
Posted by Trading Sunset at 19:55:00
Email ThisBlogThis!Share to TwitterShare to FacebookShare to Pinterest

The market continues to bounce, and we're a mere 5pts from breaking into the 1700s again. Once again, its absolutely clear, bears are pathetically weak, and the underlying market is relentlessly to the upside. Even the sp'1670s look far away right now. 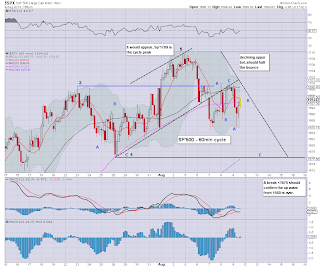 A pretty lousy end to the week. Oh sure, we're not yet above 1700, but hell, why would we not close there ?

This market is unbelievably strong, and it remains bizarre to see how some comments out there about this mornings 'big decline'.

Big? I see the indexes a few tenths of one percent.
--

I'm still short, but its largely a waste of time, whilst the bears can't even muster a 1% decline.
Posted by Trading Sunset at 18:58:00
Email ThisBlogThis!Share to TwitterShare to FacebookShare to Pinterest

1pm update - another annoying B wave

The main indexes are again bouncing back, although a close >sp'1700 does not look likely. The bounce is probably a sub'B, with a C - down to the 1675 target on Monday - with VIX 14s. The bears are clearly still struggling, despite a lack of QE. 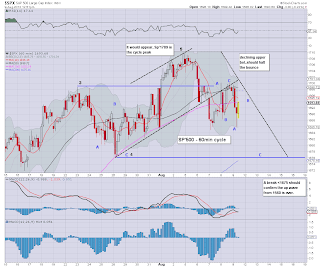 Again, its damn frustrating for those on the bearish side.

So long as we don't go above the morning 1699 high, things remain on track for 1675..but that now looks completely out of the window for today.

So...for those short, it looks like they will need to hold across the weekend, if only to capture a moderate decline to the 1670s.
Posted by Trading Sunset at 17:53:00
Email ThisBlogThis!Share to TwitterShare to FacebookShare to Pinterest

The market is still pretty choppy, the sp' is only lower by 0.4%, a marginal amount on any basis. Primary downside target remains 1675, although considering the choppy price action, that will be difficult today. 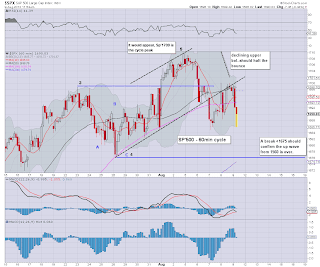 What to say? We're really only talking about marginal declines.

It remains depressingly laughable that the bears still struggle to knock the market lower by 0.5%, never mind a barely significant 1%.

*ohh, and its not surprising to see a near perfect intra-day bounce off the lower bollinger - hourly cycle.
-

Regardless, I'm trying to be patient, 1675 looks a given, just a matter of giving it some time.

A real messy morning so far, opening declines..minor bounce...then a snap lower. Hourly index/VIX cycles suggestive of increasing weakness into the late afternoon. A close in the 1680s looks possible, not least with no sig' QE until next Thursday. 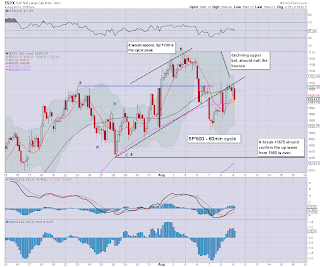 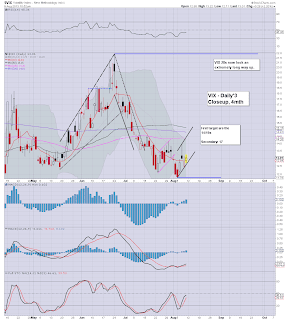 *there should be easy VIX upside into the low 14s
--

As noted earlier, at least the hourly charts are on the side of the bears into the Friday close.

So..lets see if we can break into those 1680s again..that should open up the target of 1675 - where I'm guessing we'll get real stuck.

1675 remains the exit target.
Posted by Trading Sunset at 15:53:00
Email ThisBlogThis!Share to TwitterShare to FacebookShare to Pinterest

The opening minor declines have already turned to slight gains, and the bears are looking shamefully weak. Any consistent trading above 1703/05..and there is the real threat of the market ending the week on a new historic high. 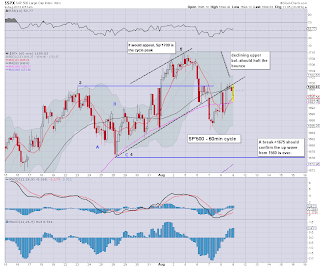 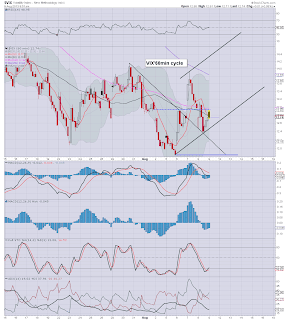 Well, as is always the case, unless the market is down more than 1 to 1.5%, the declines are rarely able to stick.

Any move >1709, and frankly, only the idiots/reckless will still be holding short.
-

A long day ahead, but right now, its not looking so great. Urghh

The one good thing, at least the hourly cycles are still on the side of the bears.

Very frustrating though overall. At least no stupid QE-pomo today.
Posted by Trading Sunset at 14:54:00
Email ThisBlogThis!Share to TwitterShare to FacebookShare to Pinterest

Good morning. Futures are moderately lower, sp -4pts, we're set to open around 1693. All the smaller cycles are offering broad downside across the day. With no QE to be concerned about until next Thursday, bears have a window of opportunity. 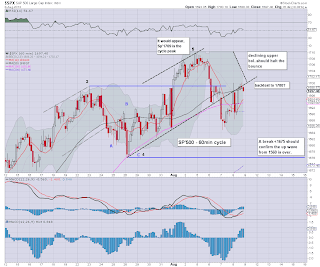 So..moderate declines to start the day. Certainly nothing dramtic, but its a start, and it won't be easy for the bull maniacs to claw back over 1700.

The hourly MACD cycle should be rolling over across the morning, with more significant downside later this afternoon.

Frankly..everything is set up for the bears, so they had better not waste today.
-
Metals are a touch lower, but Oil is higher again, although $110 looks off the agenda for some weeks, perhaps a few months.

*I am short the indexes..and seeking to hold until the sp'1670s. That sure won't be easy today, but is very viable early next week.
Posted by Trading Sunset at 14:08:00
Email ThisBlogThis!Share to TwitterShare to FacebookShare to Pinterest

The bears should be seeking to at least close the market under the sp'1700 level this Friday. If that is achieved, it will start to confirm that sp'1709 was indeed a mid-term cycle peak. Target downside is 1600/1550 into September, with VIX 'briefly' in the low 20s. 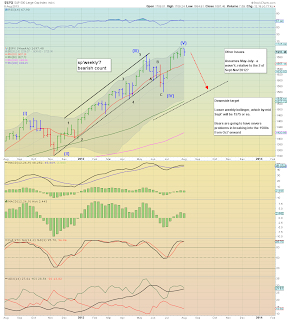 So, despite the index gains, we still have a blue candle on the weekly 'rainbow' (Elder Impulse) chart, and so long as the market closes the week <sp'1700, we'll keep that initial sign of a market turn.

Considering the 149pt ramp from 1560, I do indeed think the top is in, and that now its just a case of when we start seeing a few bigger daily declines.

There is no major econ-data tomorrow.

*There is ZERO QE-pomo tomorrow, and interestingly (and I do think its rather important), there is no sig' QE until next Thursday.

From a QE perspective, the bears now have a 4 day window to knock the indexes lower. Next Thurs/Friday both have sig' QEs, so I'd have to assume next week ends on a slightly upward note.

A H/S scenario to keep in mind, not least if we do break lower tomorrow/early next week, but get stuck around 1675. 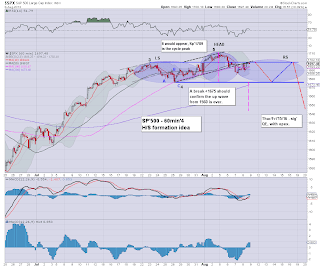 One final chart on fib levels, where both the mid 1670s...and the low 1650s (where the 50 day is lurking) are both kinda good targets for the next week or two. 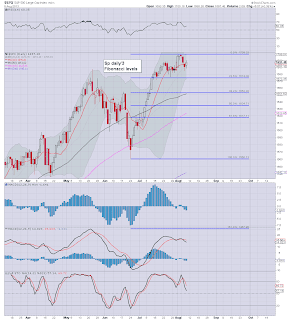 The main indexes all closed moderately higher, but certainly, the gains were nothing for the bulls to get excited about. The sp'500 settled at 1697. The market leaders - Trans/R2K, closed with stronger gains of 0.8% and 0.5% respectively. 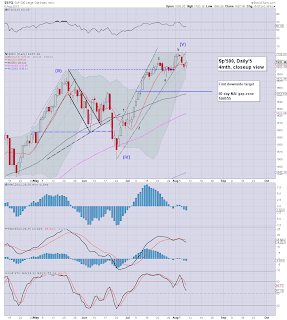 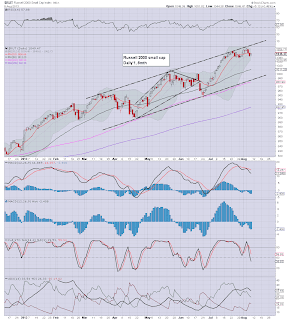 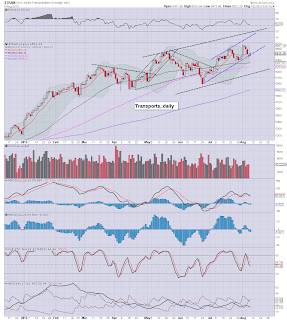 So..the 3 day down cycle has been countered with one day of moderate gains.

Considering the bigger weekly cycle charts, I'm inclined to hold to a generally bearish outlook into mid-September, and I remain holding to the notion that sp'1709 was indeed the high of the recent up wave.

Despite the index gains, the underlying MACD (blue bar histogram) cycle again ticked lower, and we remain in a moderately bearish down cycle.
--