Volatility falls into the long weekend

With the indexes recovering from an afternoon micro decline, the VIX failed to hold fractional gains, closing -1.6% @ 12.46. The VIX even marginally broke below the January lows, hitting 12.24. It remains an incredibly fearless market. 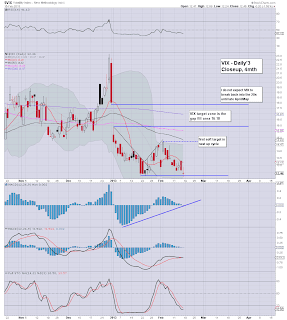 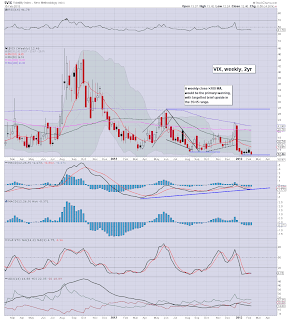 A pretty quiet week in the equity market, and the VIX merely melted lower, slipping 4% across the week.

Which brings me back to the April/May outlook for Sp'1600s, where we'll probably see VIX..single digits, which would be one of the ultimate achievements for the bull maniacs since the spring 2009 lows.
--

A little more later...on the indexes.
Posted by Trading Sunset at 23:30:00
Email ThisBlogThis!Share to TwitterShare to FacebookShare to Pinterest

Aside from a very brief touch of drama in mid afternoon - lead by WMT (or was it the rock?), it was a pretty quiet end to a quiet week. VIX is back in the 12s....there is still nothing for the bears to get excited about. 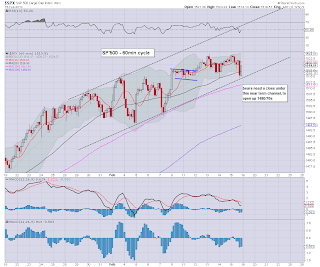 Market even managed to still close within the near term channel..so there is absolutely nothing bearish yet. There is massive rising support in the 1485/90 range early next week...it would seem very unlikely we can break below that.

*next main posting, late Saturday, on the weekly US indexes.
Posted by Trading Sunset at 21:03:00
Email ThisBlogThis!Share to TwitterShare to FacebookShare to Pinterest

A minor snap lower..oohh the drama! Did the giant rock hit yet? Is this indeed bullish? Equities sitting on soft support. Bears need a break <1512, with VIX back in the 13s. Metals remain..distressed. 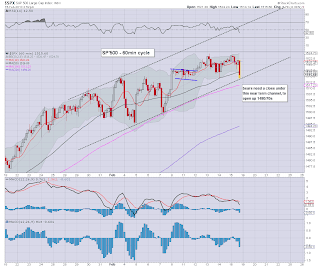 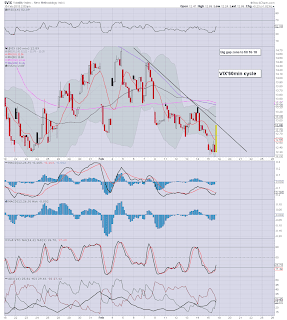 VIX is marginally interesting, but until I see the 15s, it really all noise. It could jump 10%, but as we've seen lately, such moves don't sustain themselves for more than a few hours.

back after the close..barring surprises
Posted by Trading Sunset at 19:54:00
Email ThisBlogThis!Share to TwitterShare to FacebookShare to Pinterest

Once again the latter day recovery is in effect, with the indexes fractionally green. Metals - and Oil, remain significantly lower. The latter of which might be suggestive of equity weakness when the market opens on Tuesday. Dollar is a touch higher..further pressuring those shiny things. 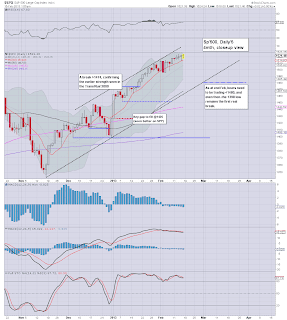 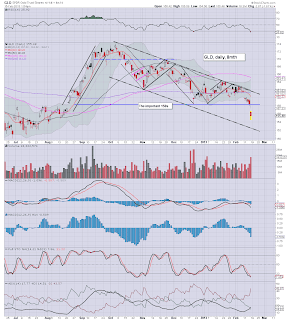 Gold and Silver both feeling the pain this week with heavy falls. I'd guess there is still another few days until it levels out, at least in the short term.

What remains the big issue is when will the next multi-month ramp start? March could be a major turn.
--

*RIG, not sure why its -5%. Its had a great run recently, broader trend should remain upward, regardless of any follow through next week.

back after the close.
Posted by Trading Sunset at 18:58:00
Email ThisBlogThis!Share to TwitterShare to FacebookShare to Pinterest

A somewhat rough end to the week for the precious metals market. Gold breaks <1600, and SIlver <30. Big psy' levels for some, but really, they have been trending lower for over six months anyway. Meanwhile..equities showing a touch of weakness into the early afternoon. 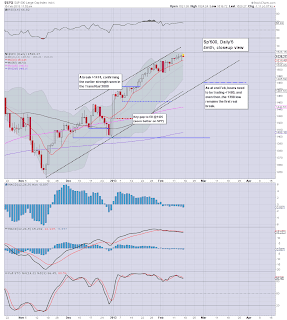 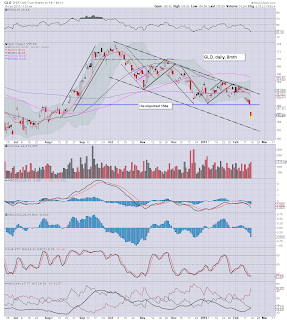 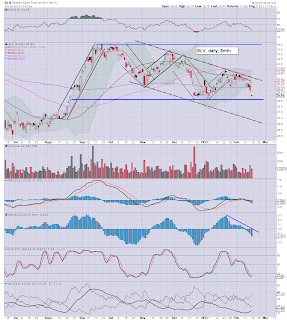 Frankly, I'm more interested in those space rocks than this nonsense. I do find it highly amusing though, seeing the gold bugs getting rattled.

Even I saw this down wave coming.

As for equities, I really don't expect much action this afternoon, we have a 3 day weekend ahead, who wants to be trading ahead of that? I didn't think so.

updates...as necessary... (as ever!)
Posted by Trading Sunset at 16:55:00
Email ThisBlogThis!Share to TwitterShare to FacebookShare to Pinterest

Good morning. I awaken to find the world still here, despite large rock/s causing some havoc in Russia . Meanwhile, Mr Market is likely to trade quietly ahead of a long 3 day weekend. I don't expect of today. Metals are getting the hammer again. 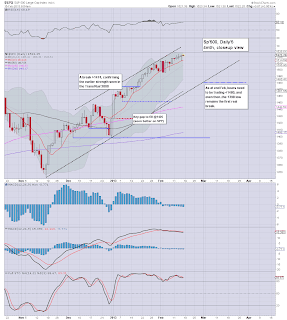 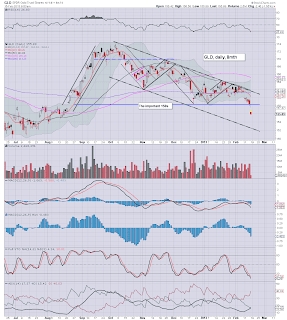 Hmm, not much to say right now. Indexes largely flat, again..as has been the case all week, metals are the one place for dynamic price action.


Get to da bunker!

back later
Posted by Trading Sunset at 14:56:00
Email ThisBlogThis!Share to TwitterShare to FacebookShare to Pinterest

The red candle that never comes

With the 'old leader' - Transports, hitting another historic high today, the primary trend remains starkly higher. There is no sign of a turn, it is a market of incredible underlying strength, one that looks set to continue for some months to come. 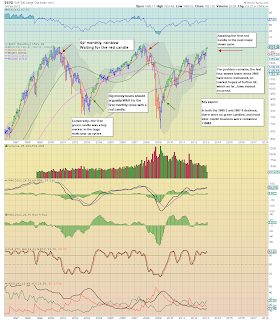 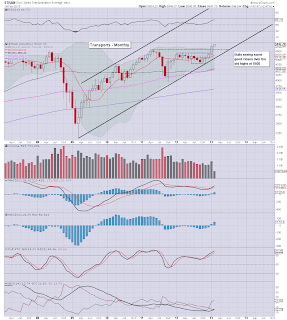 *I'm updating some of the bigger charts. Ohh, and yes, I'm sure as hell keeping them 'simple'. I see no point in adding 10,000 support/resistance lines..as so many others do. That makes it overly cluttered, and simple is best, right?

Sure, we might get a little late spring/early summer correction - very much in the style we've seen in the previous few years.

Perhaps we'll see an initial sign of weakness in April, with a closing blue candle, and then May/June with the 'moderate' correction.

With the central banks seemingly likely to ramp up the rate of printing as the year progresses - not least the BoE  as it props up the basket-case that is the UK, its very likely we'll see most asset classes continue to ramp higher. 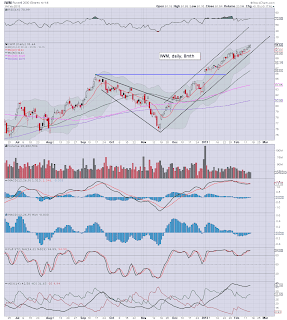 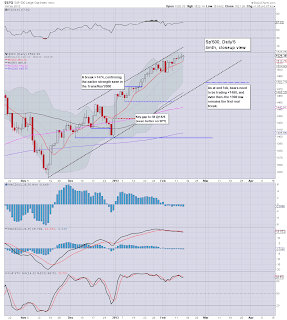 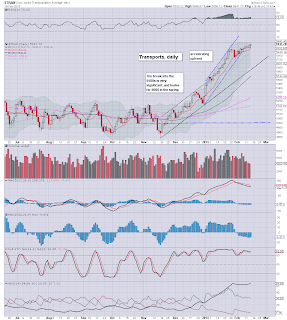 Its almost a little surprising that the indexes didn't break into the sp'1530s, but then, the morning econ-data from the EU was very recessionary, and so that didn't exactly help to inspire a super bullish open.

Yet, as usual, those minor declines simple can't last. The bears are laughably powerless, and seeing some of the indexes hit new highs was somewhat funny..in a darkly comical sense.

What is clear, absolutely NO sign of a turn lower..quite the contrary.

Friday is opex..and the lead into a 3 day weekend (yes, we're closed next Monday), so there is no reason why we can't just melt a little higher into the long weekend.