The action in the VIX today did at least confirm yesterdays reversal candle. 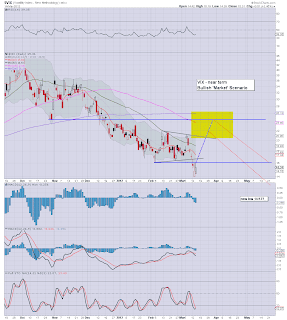 Even the bearish scenario would still call for a move to 24/26 within the near term. Clearly, bears want to see VIX claw back to around 17.50/18 by the Friday close. That would offer some hope for next week. 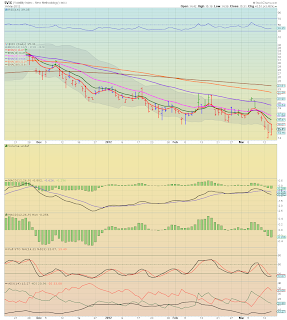 Certainly there is no proper buy signal yet. Even if the VIX does claw above 18', it will probably take at least 4 days until we see a confirmed green candle. 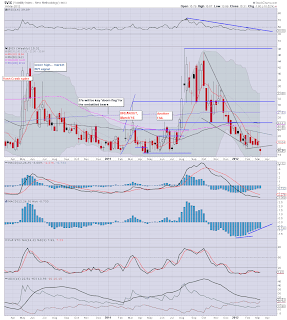 Very disappointing action so far this week. Somewhat depressing is the realisation that even a Friday close of 18 would still offer nothing in the scheme of things. However, at least 18 would help to keep dragging the underlying momentum back towards going positive cycle in about 2-4 weeks.

All charts keep noting the 24/26 level as very key, whether one takes an overall bullish or bearish outlook.
Posted by Trading Sunset at 22:00:00
Email ThisBlogThis!Share to TwitterShare to FacebookShare to Pinterest

Commodities - on the edge of snapping lower

Interestingly, despite the recent major market ramp to new highs, commodities - and their related stocks are still not participating. 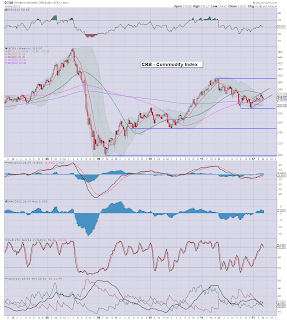 CRB could be putting in a bear flag. The MACD cycle is certainly suggesting a rollover, with a target 'snap'  within about 2-4 weeks. 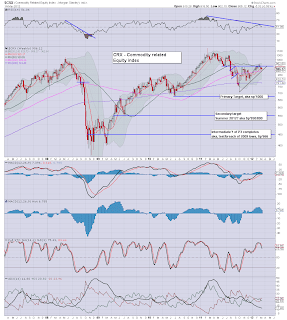 The CRX remains arguably the last real super bearsh chart out there right now.  Just like the CRB itself, its around 2-4 weeks from a possible major snap lower. 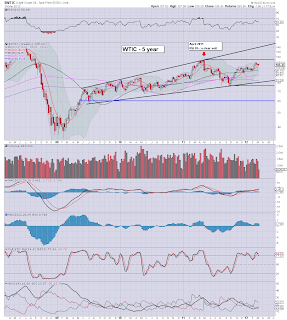 *I will post an update on the metals later, GDX (miners ETF) deserves a good mention too!

Posted by Trading Sunset at 20:27:00
Email ThisBlogThis!Share to TwitterShare to FacebookShare to Pinterest

AAPL - where will it end? 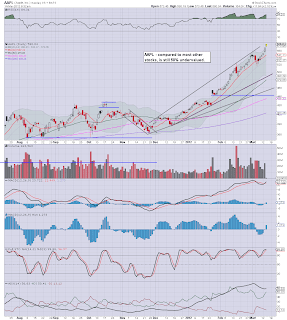 The infamous AAPL had another super Tuesday.  See the blue histogram MACD cycle, which is again turning positive cycle. It could easily crawl up for another 3-5 trading days.

Bearish target: the 10 day MA, currently 543 - but rapidly rising. So right now, even a $25 dip would not negate the current relentless uptrend. Arguably, only if AAPL can see 2-3 days of consecutive closes below the 20MA (presently $528), can the short term trend said to be broken.

Assuming the main indexes can comfortably crawl into the SP'1400s, and that no 'events' occur in March, it'd seem that AAPL in the mid 600s is very reasonable to expect by late April. Who would dare short this monster of a stock? Anyone bearish on AAPL should dwell on the fact that the Forward PE ratio for AAPL is a mere 12. That is barely half of the average. Considering the legion of consumers that will buy anything with the Apple logo on it, surely it deserves to be at least part of the 'average' PE group?

Good wishes for Wednesday!
Posted by Trading Sunset at 13:33:00
Email ThisBlogThis!Share to TwitterShare to FacebookShare to Pinterest 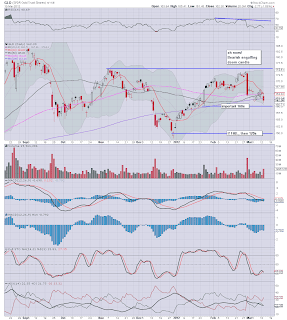 GLD getting close to taking out a key level.

If 160s fail to hold, it looks like Gold should be falling a further $100 to to test the all important 150 level. If that level fails, then Gold looks set for an adventure to the lowly figure of $1200 within a few months. 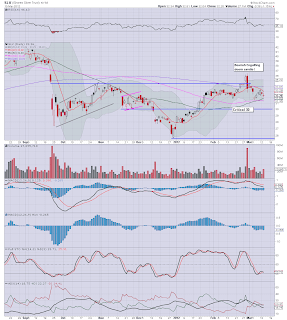 *I suppose metal bugs could claim an inverse H/S setting up, and indeed the 'RS' would be the all important $30 level.

Good morning all! Well, looks like this overnight posting is very much appropriate! Even more interesting, Gold is leading the way lower, something that the underlying momentum cycle was suggesting.

As noted, a break under GLD $150..and it probably signals that Gold itself will be $1200 or so this summer. That will make for a nice opportunity to buy physical.
Posted by Trading Sunset at 08:00:00
Email ThisBlogThis!Share to TwitterShare to FacebookShare to Pinterest

3 Charts to Scare the Bears

Okay, these are the 3 scariest charts I could find in my collection this evening. 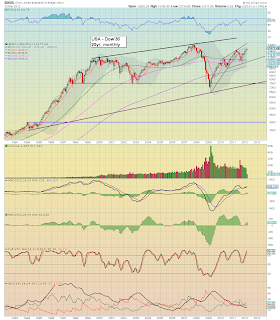 This is the same chart that I had posted this past weekend, and it sure is bullish. Every indicator is trending upward. Dow 14k looks very feasible within the next few months. 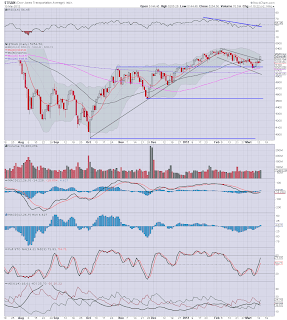 The transports was most the most obedient index to the October trend line. It was the first to rollover...and the first to put in a near perfect bull flag.

Today, without question the bull flag has been broken above. The only thing for added confirmation would be a new high. 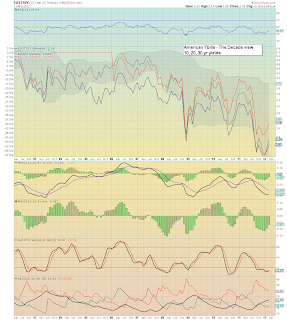 I rarely mention the bond market, but it is something I keep an eye on - not least due to Rick Santelli on clown channel. In particular, look at the MACD (green bar histogram) momentum indicator. We are not even positive cycle yet. We could comfortably cycle UP for another 3-6 months - and that would match up perfectly with a giant wave'5 UP in the main indexes.


The stuff nightmares are made of

The 3 charts noted above are indeed pretty scary. It is looking very feasible that sp'1450/1550 is very viable by mid summer. The VIX would probably hit 10, maybe even briefly 7-9 if Benny did QE3 leading to one final extreme period of irrational exuberance.

The question is can things keep ticking along 'calmly' in the world economy at least until early Autumn? The Bernanke still has QE3 sitting in dry dock, but its fully armed, and even if we pullback in the coming weeks, it'd give the Bernanke an excuse to buy a truck load of worthless MBS, and help indirectly recapitalise the banks with another trillion of Bernanke-bux.

Posted by Trading Sunset at 02:20:00
Email ThisBlogThis!Share to TwitterShare to FacebookShare to Pinterest

SP'500 - breaking out, and cruising higher

Tuesday's action was indeed VERY bullish. Clear breakouts all over the place. 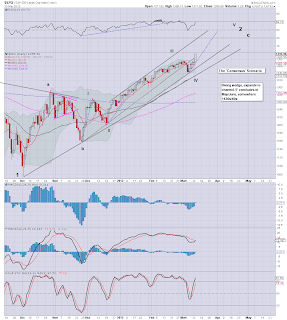 *ignore the count on this chart (the monthly chart would argue against it)
Presently, it looks like a move to the mid 1400s is now very probable in the very near term. 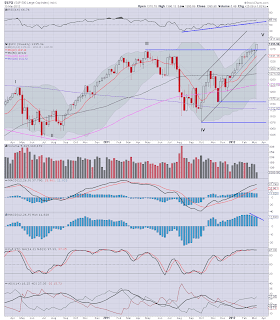 
SP' monthly - the 'P3 not even started yet' chart 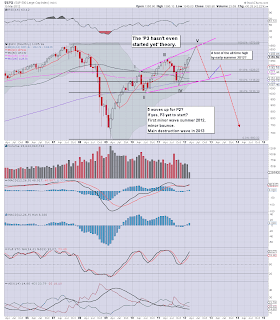 For the bears, this is obviously a pretty disturbing chart. It certainly suggest the natural move of this up wave would take us to around 1450, and more likely to...1550.

By early summer, it will even be viable for the SP' to have made a challenge of its all time high of 1576.

Any bears still short now have a real decision to make. Do they evac - doubtless some did that today after 1380 breached, or do they try to hold out a few more days, and hope the VIX did indeed signal a floor today?

Goodnight from the city.
Posted by Trading Sunset at 00:00:00
Email ThisBlogThis!Share to TwitterShare to FacebookShare to Pinterest
Newer Posts Older Posts Home
Subscribe to: Posts (Atom)