11am update - a major fail for the bears

The bears had a chance to hold this rally back, but they have clearly failed. The VIX which was initially holding up very well, is now red. The daily index cycles are similarly turning bullish - no matter how bad the news appears...we're back to risk-on mode. 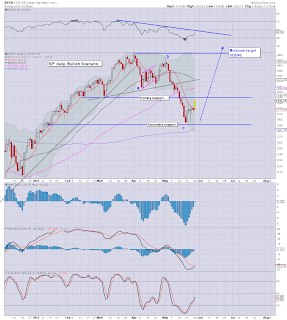 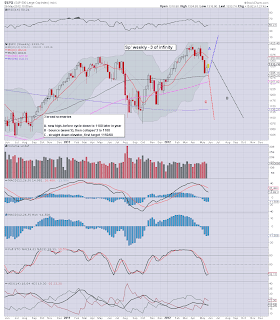 Its looking like C' is now out the window. The only issue now is whether we put in a lower high around 1370/80..or just keep on going to break >1422. If the Greeks can magically form a new Govt' in mid-June, then this crazy market will take route A.

As noted last Friday, the last line in the sand for serious money bears, was sp'1330. We're now comfortably holding over that, and its looking like we'll break above the bear flags on most indexes - if the current gains can hold across the day.

The next issue is how high do we go? Obviously, 1340 - the old support line is major, but considering the momentum MACD cycle is now due to go +cycle late today/early tomorrow...it looks like it will keep on going. - the old resistance level is 1370/80.

If the market is pleased with the GDP/Jobs data later this week...this rally could really could just keep on going in June..and beyond - regardless of  how bad the reality is.