US equities closed broadly weak, with the sp'500 -22pts @ 1979. The two leaders - Trans/R2K, settled lower by -2.7% and -2.4% respectively. Near term outlook threatens early Wednesday weakness, but it still seems highly probable that the equity bulls will push >2009, to at least test the 200dma, into the next FOMC. 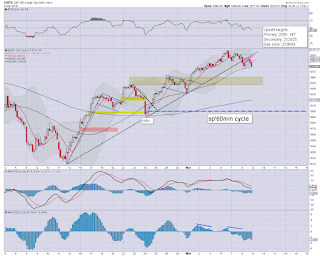 *closing hour action: after a micro double top completed from sp'1994 at 2.15pm.. the market saw rather notable weakness into the close, breaking what was a baby bear flag, with a new intraday low.

In theory, early Wednesday should see at least 1975/70, perhaps the 1960s.. briefly, before clawing back upward, ahead of the Thursday ECB.
--

Clearly, not a great day for the bull maniacs.

..yet, the equity bears should not be getting overly excited just yet. There are still the two hurdles of the ECB and FOMC to get out of the way, before there is an clear window into April.