US equity indexes closed moderately mixed, sp +0.3pts @ 1989 (intra range 2005/1969). The two leaders - Trans/R2K, settled lower by -0.1% and -0.8% respectively. Near term threatens Friday weakness, but still, the market looks set for another push higher into next Wednesday's FOMC. From there... another key lower high should be solidified. 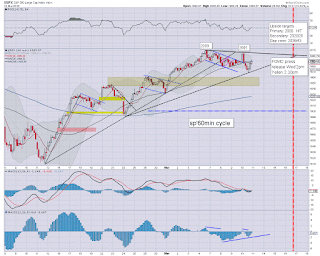 All that is left now is the FOMC next Wednesday afternoon.

I admit its entirely possible that even on a spike higher next Wednesday, we might not break either of the two recent highs of 2009/2005. Today's latter day recovery was another example of the underlying upward pressure.

For the super cautious bears... another 3.5 trading days to wait on the sidelines.