It was a day for the equity bulls, with the sp' +11pts @ 2096. Yet, with the FOMC tomorrow, and the ongoing 'Greek situation', there will be renewed opportunity for the bears to whack the market lower into the weekend. From here on.. there is high risk of a Greek default across any given weekend. 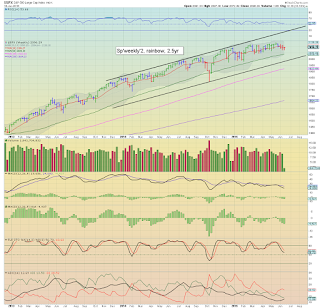 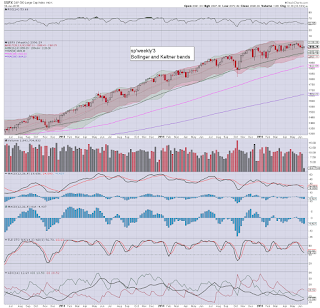 The third consecutive red candle on the weekly 'rainbow' chart. The lower bollinger is offering downside to sp'2050... where there are multiple aspects of support.

Clearly, if the Greek govt' decide to default, any market washout will likely level out around 2K.. at least initially.

*as noted at the weekend, by late summer, best case downside for the Dow will be in the 16500/000 zone. Under no scenario (whether GREXIT, and/or higher rates) can I see sustained price action <16K.

Wednesday will see the latest EIA oil report.. oil bulls should probably be seeking a net draw of at least another 3-5 million barrels.

Of course, the big event will be the latest FOMC announcement, due at 2pm.. with a Yellen press conf' shortly after.

Market is certainly not expecting (neither am I) a change in rates.. until the FOMC of Sept' 17th.
-


FOMC spike.. and then down?

Across the last few years one of the more interesting situations has been where the market spikes higher on the initial FOMC press release, maxes out within 5-15mins.. levels out.. and then unravels into the close. The setup for tomorrow is pretty reasonable for those looking to re-short the market.

I'll have my eyes on INTC (it remains one of the more bearish price structures that I know of).. and will consider picking up some option puts tomorrow afternoon.