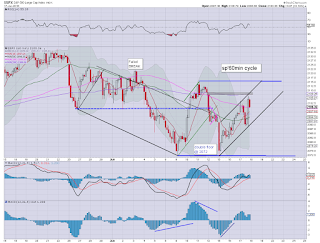 The second consecutive net daily gain for the sp'500, but with moderate weakness in the two market leaders.

Overall.. it is a bit of a mess. Until we're back over trend resistance of sp'2110 or so... there remains threat of renewed downside (if briefly).. purely due to increasing Greek concerns.