Primary trend remains with the bulls

The US shutdown/debt ceiling issue was indeed nothing more than another round of petty political games. The market has already rallied 5% since the lows of last week, and the sp'1800s look a viable threshold to hit by late November. This market remains very much in favour of the bulls. 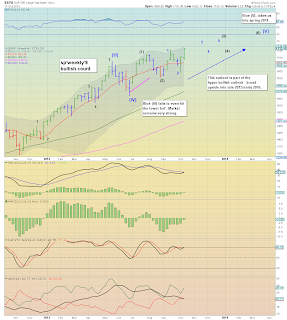 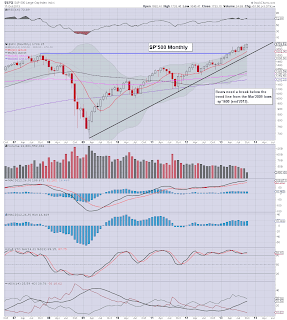 There is a lot that could be said right now, not least about all those doomer maniacs - and they ARE maniacs, who were confidently touting a US default. All of those same idiots will no doubt be drafting and re-dating the same 'omg, a zombie apocalypse is coming this weekend'..for February 2014, when the debt ceiling issue will again arise.

For now, I think I'll leave it at just that.

There is no econ-data due tomorrow - with the shutdown over, econ-data should re-appear in full next week (see note'1). Friday should be a relatively headline-free day. Importantly, it is opex, and so some degree of price chop is likely.

Note'1: It was announced after the close of trading, that the Sept' monthly jobs data (due two weeks ago) will now be issued next Tuesday morning. Further, the Oct' jobs report - due Fri' Nov'1, will be delayed one week to Nov'8.
--

Whether we close the week in the sp'1720/30s..or even 40s..it really doesn't matter. The bulls are unquestionably in firm control of the market, never mind the fact that the QE fuel just keeps on flowing