The main indexes are increasingly broken, with the Dow breaking the 200 day MA of 14727 just earlier. Regardless of any minor bounces..further declines seem likely until an agreement is reached. The recent key low of sp'1627 looks likely to be broken..and that will be the first lower low since Oct'2011. 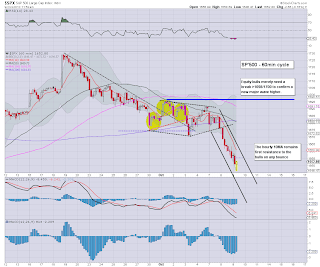 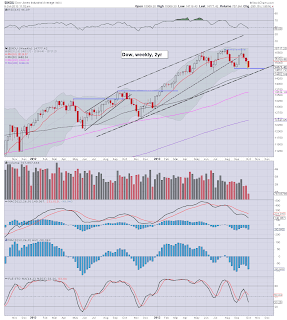 Little bounces are to be expected..very hard to guess the timing/size, but what is clear...especially via the weekly charts...

we're broadly headed downward, at least until a provisional agreement is announced..and frankly..that now seems unlikely until the tail end of next week.

*keep in mind we have the FOMC minutes due at 2pm..and that could be an excuse for the market to briefly spike higher..before renewed selling.
--

VIX in the mid 20s..I guess is a given if you assume sp'1627 will be taken out in the coming days. A brief spike into the 30s...- which we've not seen since 2011..would make things pretty exciting next week.
--
time for tea.
Posted by Trading Sunset at 16:55:00
Email ThisBlogThis!Share to TwitterShare to FacebookShare to Pinterest
Newer Post Older Post Home