With the indexes pulling back lower, away from their FOMC highs, the VIX again closed a little higher, this time by 2.7%, to settle @ 17.0. The near term trend looks upward into Monday, perhaps into the low 18s. Considering there is no fiscal cliff agreement yet, the VIX remains remarkably low. 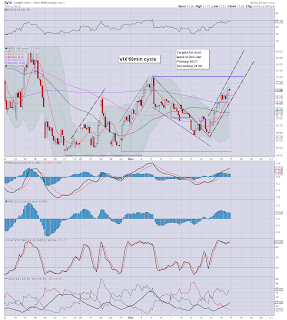 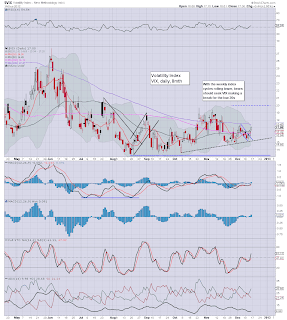 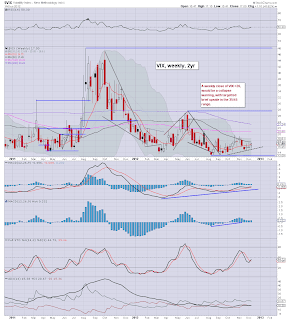 We have a distinct little up channel on the hourly chart, the close of 17.0 should be considered as some progress for the bears. Yet, we haven't tested the 18/19s since mid November - when SP' was in the 1340s.

The daily chart offers support for 18/19 - briefly, this early Monday.

The bigger weekly chart is offering a VIX that could easily explode at any point. Even a move into the high 20s would be minor in the grand scheme of things.

Those bears who believe we'll be trading in the low sp'1200s in early 2013, should probably be looking for VIX to spike into the 35/45 zone.

Those VIX Feb' $25 calls for $1, look very tempting right now, with upside of 1000% sometime in January. As it is, I will not look to pick up any VIX calls until after Christmas day.